We trekked across town to Bayswater to check out the pop up in The Beachcomber Bar by Creole Kitchen chef and cookery writer Vanessa Bolosier. 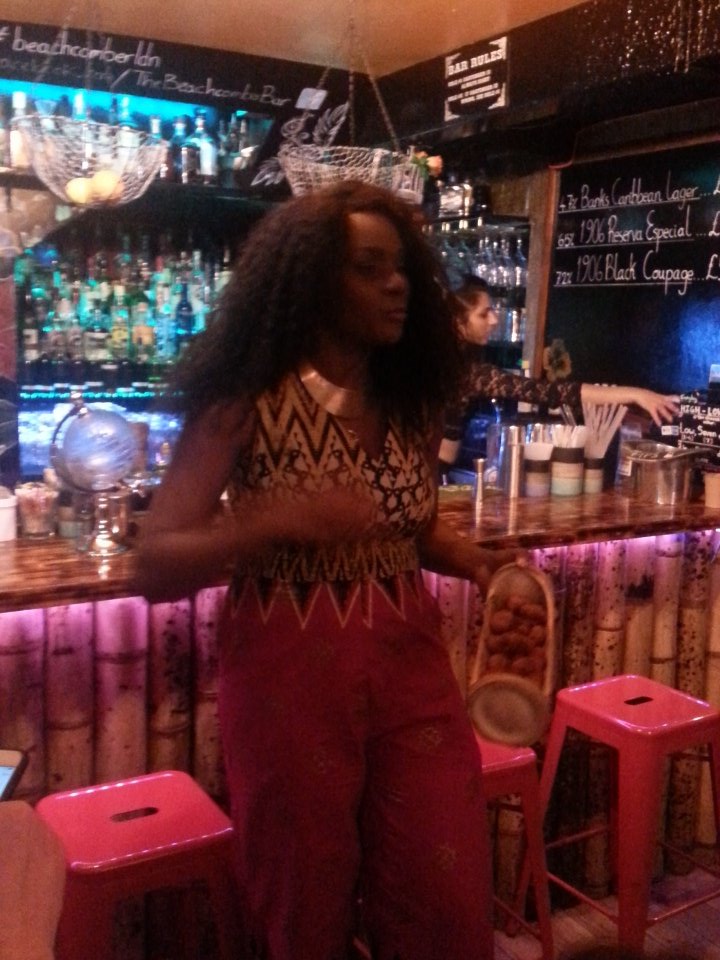 We kicked off with plantain chips, plus bokit (spiced dough) and saltfish fritters served with avocado feroce and sauce chien (a traditional accompaniment to bokit) – light, salted white fish deep-fried morsels of deliciousness coupled with a creamy but spicy avocado dip! 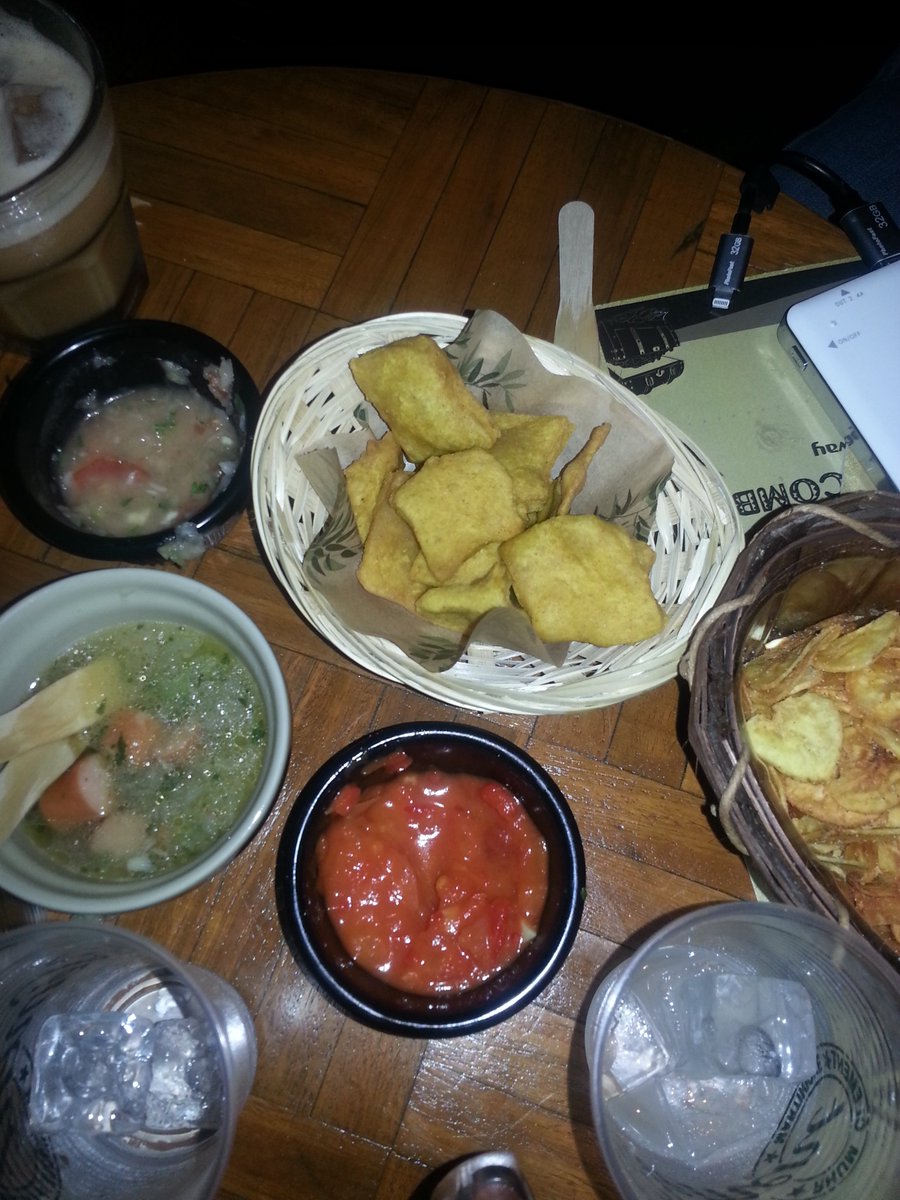 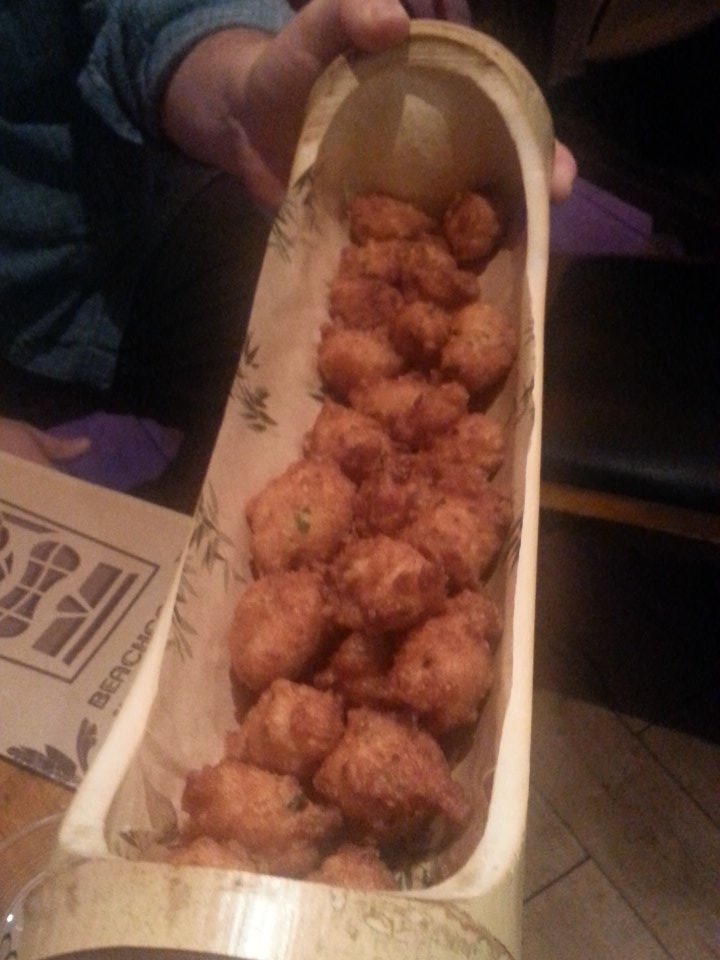 Then we got a few cocktail masterclasses throughout the evening by head bartender Adam and associate Ash, with the ability to enjoy all these cocktails without having to put any of our bar skills to the test (a good thing for all I think, as we need practice!).

First up was a true tiki cocktail of Root 666 – including Jagermeister, Koko Kanu, coconut, with an unusual addition of beetroot: 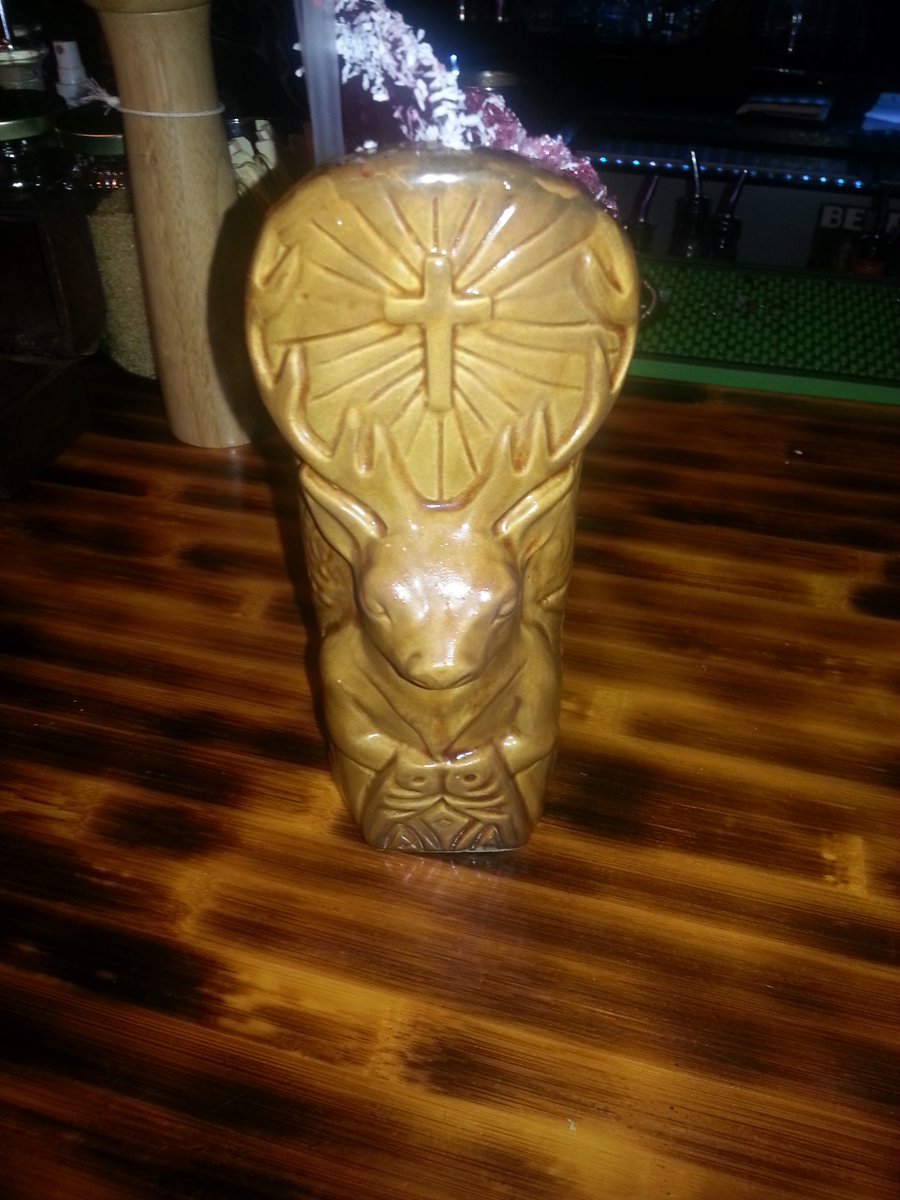 Then followed The Agwadisiac – you can pretend you’re by a sea, with a cocktail as azure as this: 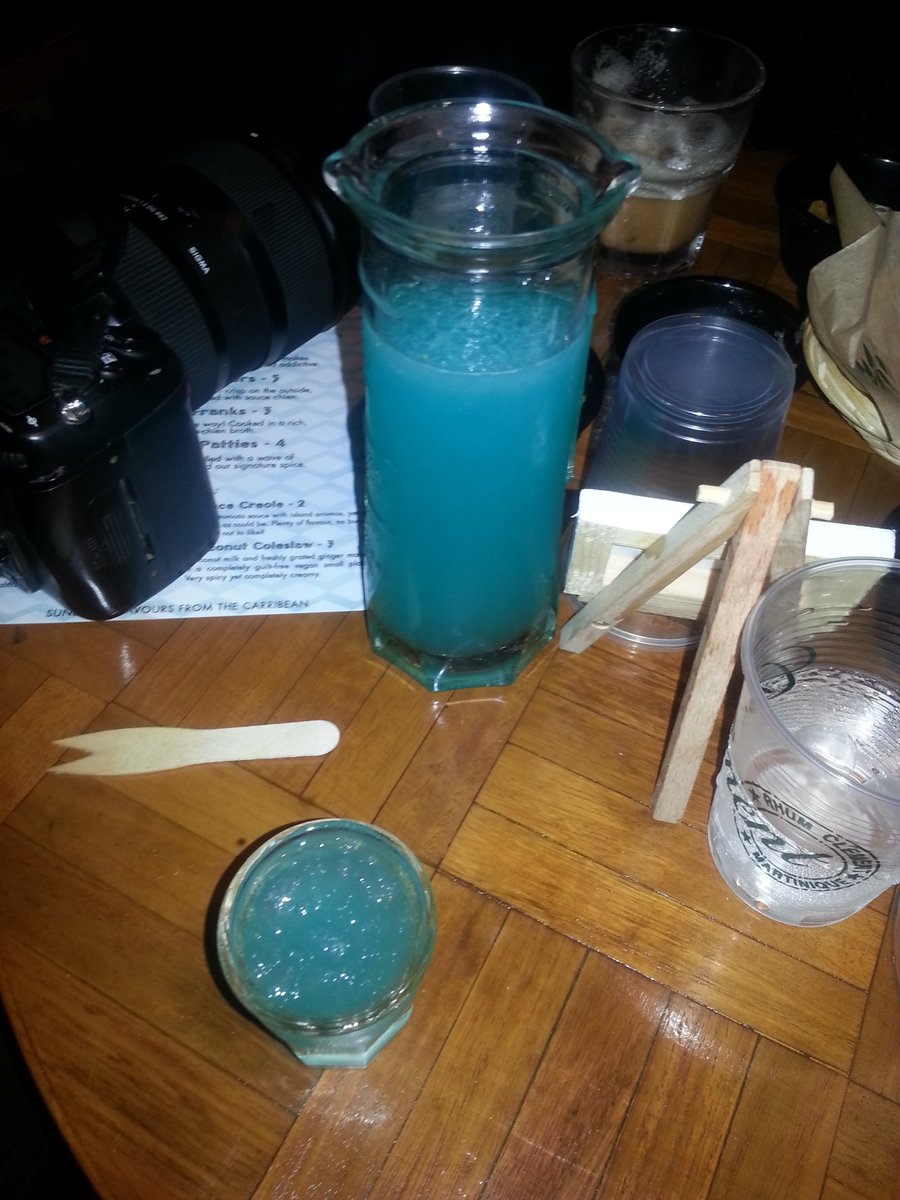 Aubergine patties were wonderful comforting mouthfuls and were so moreish, and reminded us of the goan sausage patties we get back in Goa! 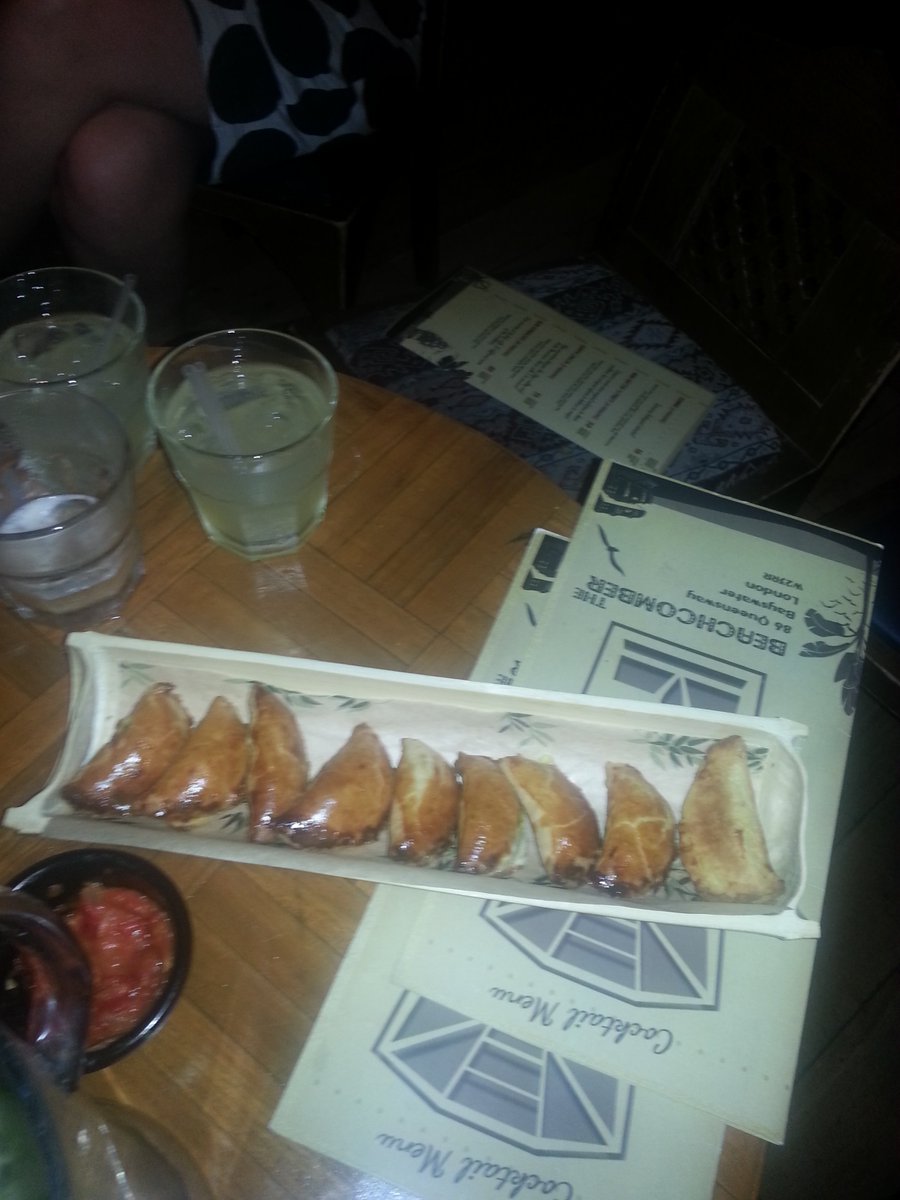 This goes well with Vanessa’s authentic Creole coconut coleslaw. Though, warning: her super spicy coleslaw packs a punch with the chilli, and has get elements of coconut and fresh ginger, but gets you craving to go back for more! 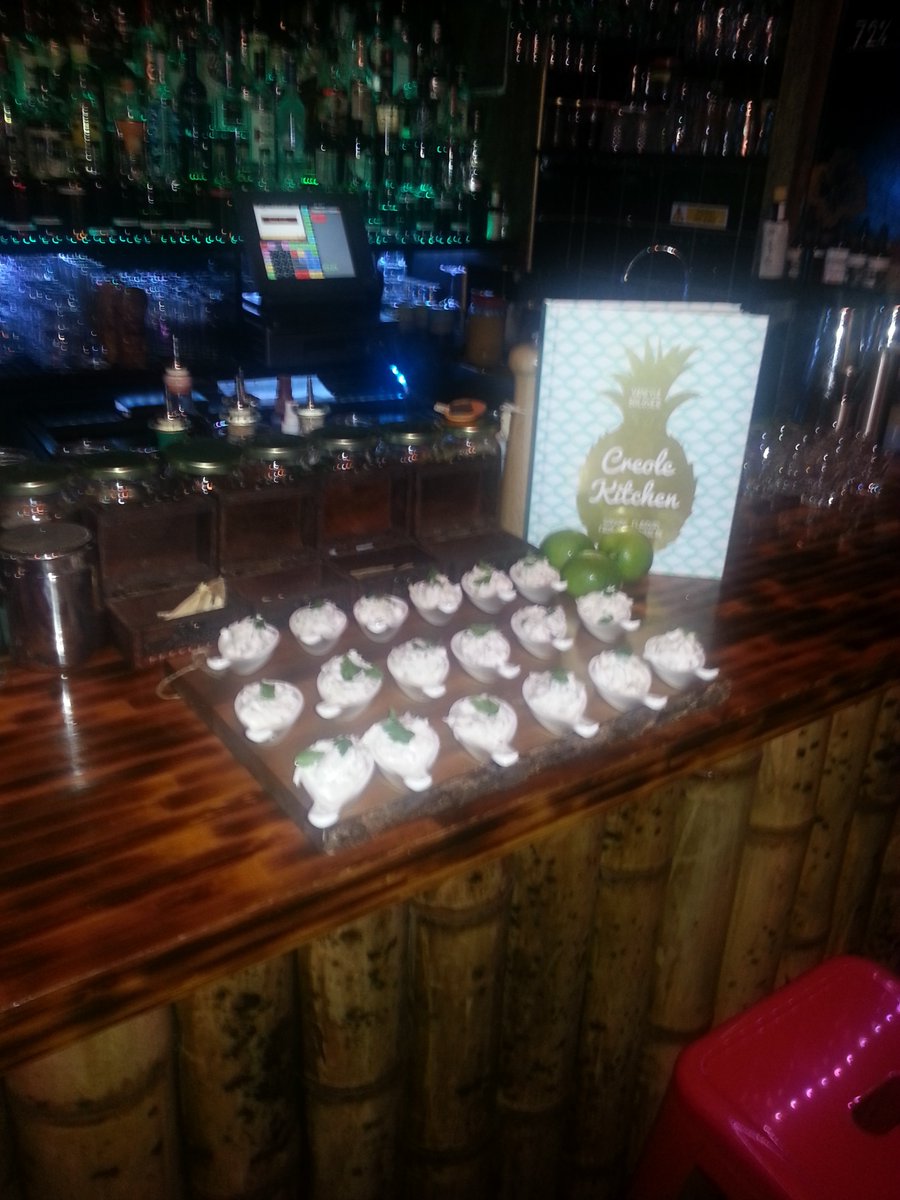 Don’t forget that you could be luck and win discounts with a roll of the dice – as modelled by the lovely Katy: 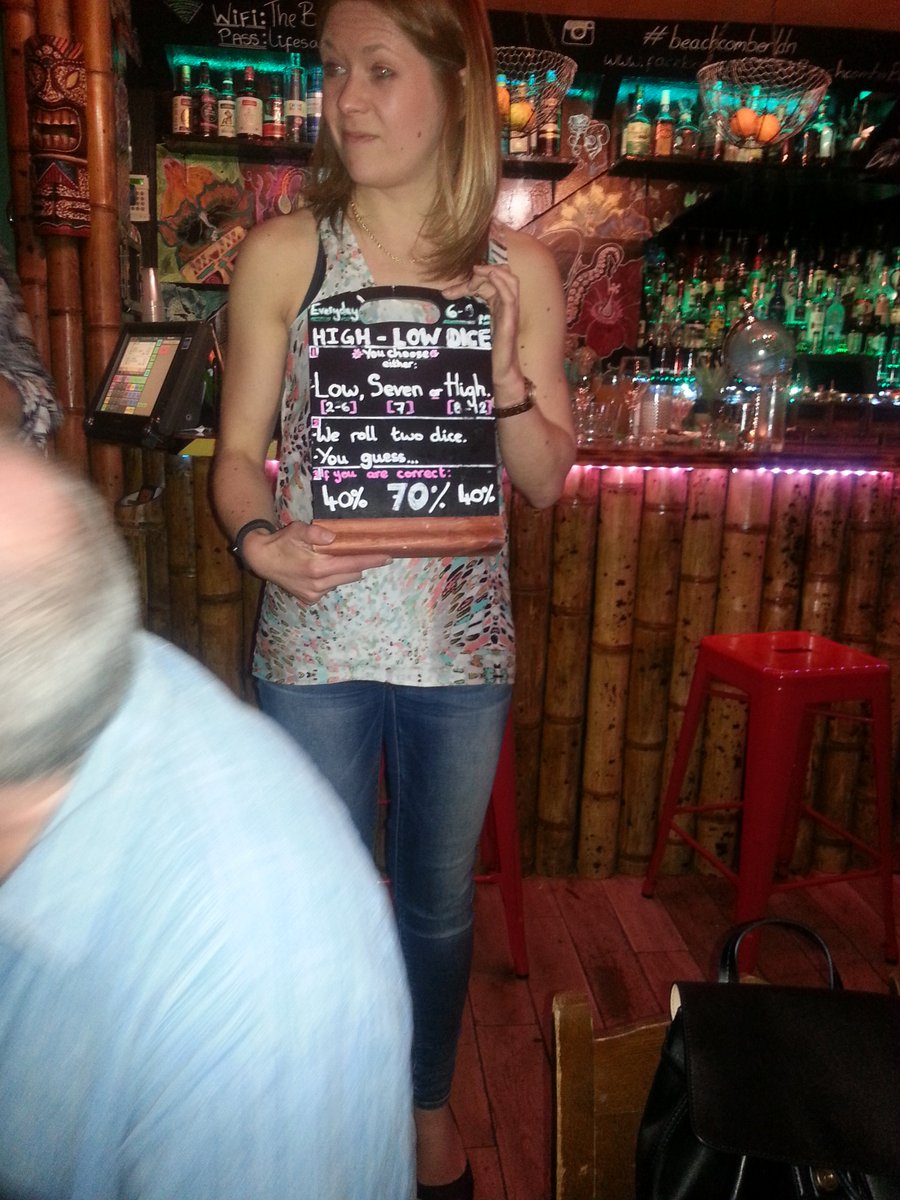 Rounded off the evening with wonderful dessert cocktails of Mad Hatter Ti Party and The Mochalada – two of Vanessa and Adam’s favourite desserts in cocktail form – not giving anymore away, you will just have to go to find out more! 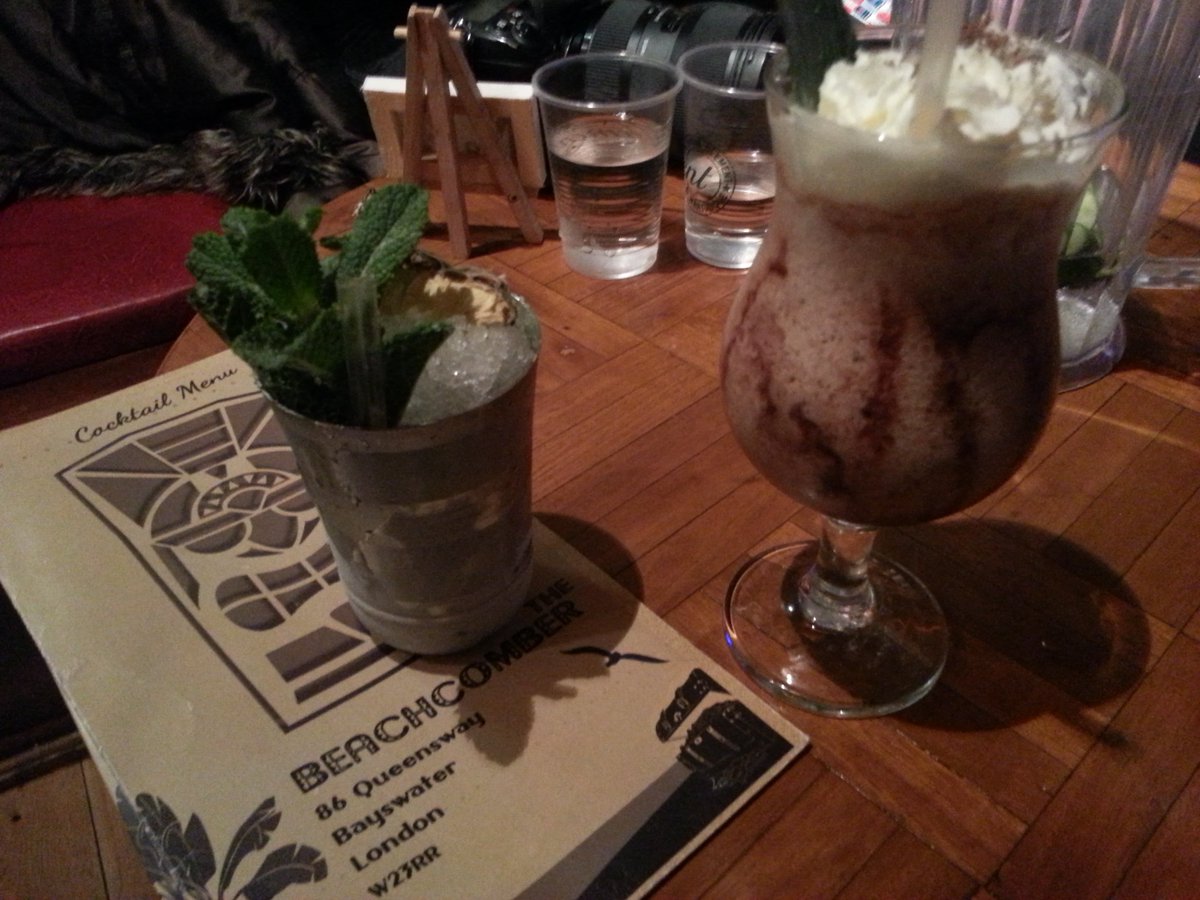 Go visit The Beachcomber and experience the delicious Caribbean culinary treats from Vanessa coupled with the amazing cocktails created by Adam, and be transported to Vanessa’s home of Guadeloupe and Martinique!

Finally, this evening, Thursday 9th June,2016,  The Beachcomber Bar will be hosting a special “Creole Curry for Change” supperclub feast with cooking from both Creole Kitchen’s lovely Vanessa Bolosier and the amazing Taste Mauritius’ Chef Selina Periampillai to raise vital funds for Find Your Feet. Tickets are still available to purchase here.

Great meeting fellow foodies including Chris , Michelle and Jane, Nick and Helen, Alicia and Natalie, Saff and Ade , Lucy and Daisy, and Anastasia.

Thanks also to Katy from Market Fresh Communications for inviting us to the Creole Kitchen launch.

International food and travel blog by London based British Goan duo: Jason and Chiara Pinto. Twitter: @goantolondon @jasonpinto100 @chiarapinto About Goa: Goa is a small state on the western coast of India. Though the smallest Indian state, Goa has played an influential role in Indian history. Goa was one of the major trade centers in India, thus it had always been attracting the influential dynasties, seafarers, merchants, traders, monks and missionaries since its earliest known history. Throughout its history Goa has undergone continual transformation, leaving an indelible impression on various aspects of its cultural and socio-economic development. History of Goa: The East-West symbiosis of Goa makes it different from other parts of India, more than the historical and social niche. The history of Goa is a sweet and sour story of colonial heritage, oppressive rulers, a glorious culture, and uneventful immediate past. As a land with the identity of its own, Goa was brought into focus when it was liberated of Portugal from its oppressive rule of around 450 hundred years in 1961. Goa was captured and annexed to the Portuguese in 1510 following the urges of trade and demand of spices and also cottons and indigo. But, Goa has a history that starts much before Portugal even thought of Goa being where it is. Goa was coveted and ruled by a great number of Indian kingdoms and dynasties from the 4th century onwards. The first kingdom to rule Goa and Konkan were Bhojas, who were the feudatories of Ashoka in 4th and 5th centuries AD. The city of Chandrapur (present Chandor) was founded by Prince Chandraditya, son of Chalukya King Pulakesin from 566 to 597 A.D. after this, Goa was ruled consecutively by Silahara Dynasty, Kadamba Danasty, and finally Hoysalas from 1022 to 1342 A.D. From the 14th century onwards, Goa became a great trading center on the west coast, especially in the vast trade of horses imported from the Middle East. This was the time for bigger empires to move in and Vijayanagar Empire conquered it in 1344. But there empire was not going to last too long and in 1347, Bahmani Sultans defeated Vijayanagara forces in 1347 and controlled Goa. Afterwards, it was a time of great prosperity and peace for Gpa, especially during the rules of Yusuf Adil Shah and Ismail Adil Shah. They created beautiful houses, fortified Goa, and encouraged local craftsmen. Their liberal and progressive rule was not going to last too long and situation changed in 1510 A.D. Goa for all purposes was not on the Portuguese Radar even after a long time of their presence in India. When the Portuguese nobleman Alfonso de Albuquerque and his cousin Francisco de Albuquerque were sent with a powerful fleet in 1503 on the orders of King Dom Manuel I, the purpose was to defend the cargoes of spices, mostly pepper, against Arab Muslim raiders. The center of spice trade was Calicut at that time and Portuguese had built forts in Cochin and Cannanore. It was in 1506-08 that an opportunistic pirate, Timoja, persuaded Albuquerque to attack Goa and acquire a better land base. This made Goa, Portugal's first real territorial acquisition in Asia. After a brief period of recapturing by the Muslims, Goa Albuquerque finally captured Goa in 1510. The inquisition of Goa in 1540 reversed the previous liberal policy of Albuquerque and imposed strict censorship of literature and new laws to forbade non-Christians from professions. Forced conversions took place continuously, censorship was established on literature, the temples were destroyed, and non-Christian priests, holy men, and teachers were evicted. This led to continuous fleeing of Hindus from Goa to other parts of India. It is not that the relationship with Portugal brought only destruction for the Goans. Portuguese also built great churches like the church of St. Cajetan and Bom Jesus basilica in Old Goa, which is a pilgrimage site for the Christians from around the world. But it is also true that pre-1961; Goa was a highly impoverished region very backward and primitive. It is after the liberation that Goa of today has emerged and it has surprised even the locals many of whom had left their homeland before its liberation. Portugal and India are today friends and Goa continues to be a fascinating blend of Latin and Oriental. Information sourced from: http://www.royalorienttrain.com/goa/goa-history.html
View all posts by goantolondon →
This entry was posted in Bayswater, Caribbean, Creole Kitchen at The Beachcomber, England, Find Your Feet, fusion cuisine, Global inspirations, London, Market Fresh Communications, saltfish, Selina Periampillai, Style of cooking and tagged #CreoleKitchen, #CurryforChange, #fritters, #letschangelifes, #Mauritus, #staytiki, #tiki, #westlondon, @Beachcomberldn, @FindYourFeet, @FoodGoblin1, @grub_club, @KatyMarketFresh, @scratch_london, @Shark4ChipDrink, @StreetEatsLDN, @tastemauritius, @tikichris, @vanessabolosier, @WeLoveFoodTweet, aubergine, Bayswater, Caribbean, charity, cocktails, creole, Creole Kitchen, curry, event, Find Your Feet, food, French, French Caribbean, fundraising, Katy Riddle, London, Market Fresh Communications, patties, pop-up, RT, rum, saltfish, Selina Periampillai, supper club, support, Taste Mauritius, The Beachcomber, Vanessa Bolosier. Bookmark the permalink.