The Tabl, a feast for all the senses!

When we got to the Tabl community founder event at Clerkenwell London & 155 Bar and Kitchen, it was like a sensory playground. Food and drink in every direction, it was hard to know which way to go or what to try first. They had stalls with lots of the supperclubs and producers that they work with so you could have a little taste of everything, and boy did we try to!

First a steadying cocktail was thrust into our hands to help (or not!) with the decision making process. A Brighton rocktail to be precise, a G&T from Brighton Gin with a stick of Brighton rock in it which gradually dyed our cocktail the azure blue of the British seaside (ahem!). 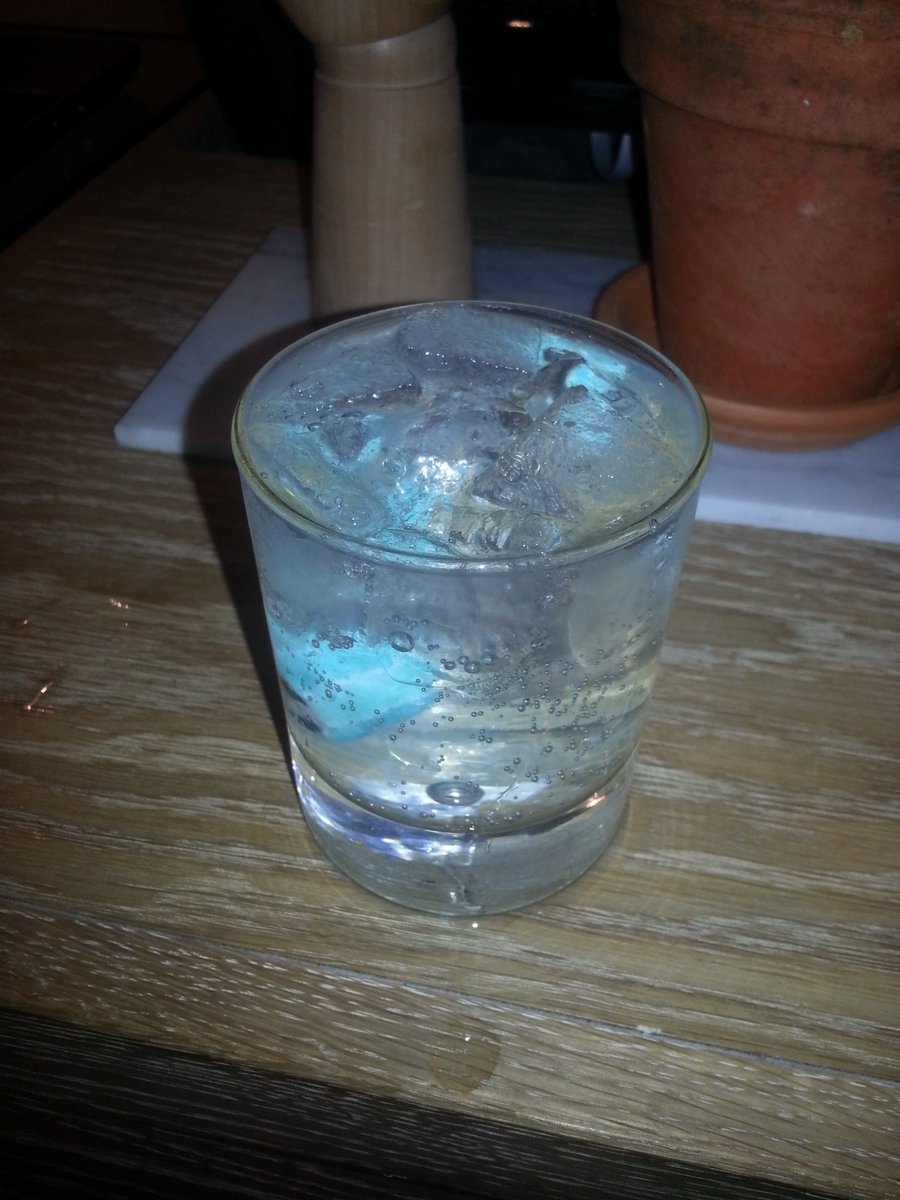 Loved the cayenne chilli kick in Nix and Kix drinks!

This was swiftly followed (two cocktails are always better than one!) by a orange infused delight from the cool cocktail masters’ Opium Chinatown, though it was as strong as a negroni. 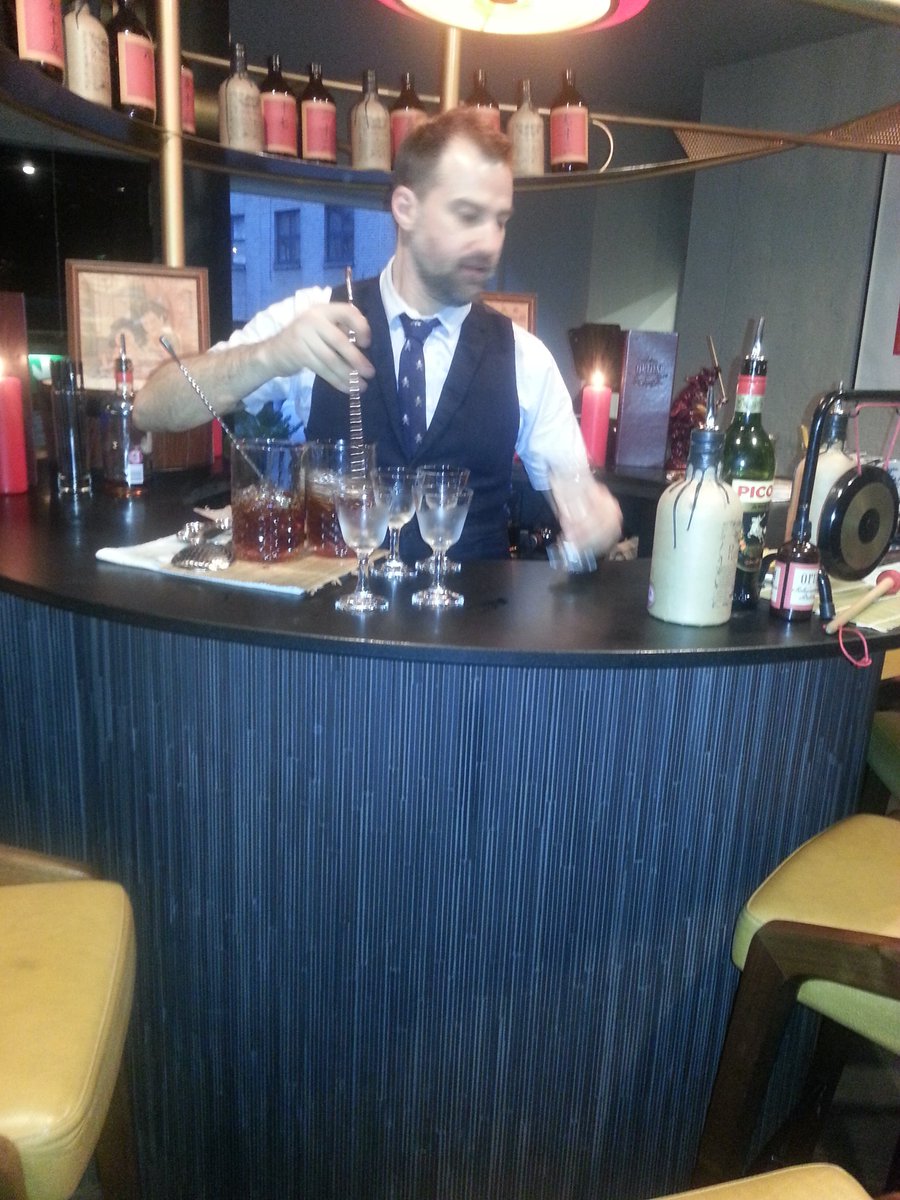 Next we got to watch chef Damian Wawrzyniak making venison tartare. This looked so tempting I couldn’t resist swooping in for a taste. When I think how sushi used to freak me out and now here I am happily devouring raw venison. Thank you food blogging for expanding my horizons!

We did a quick detour downstairs and we might be biased but there definitely seemed to be an Indian theme running through things (representing!). From the lamb kati rolls at Rastawalla to the chai flavoured chocolate from Cocoa Hernando – the flavours of the subcontinent were everywhere. We got some traditional Indian treats and curries from Little Black Cat. One of the best were Chin’s Kitchen who do a healthier version of nankhatis (crumbly Indian biscuits) and a rosewater and cardamon flavoured cake inspired by gulab jamuns. 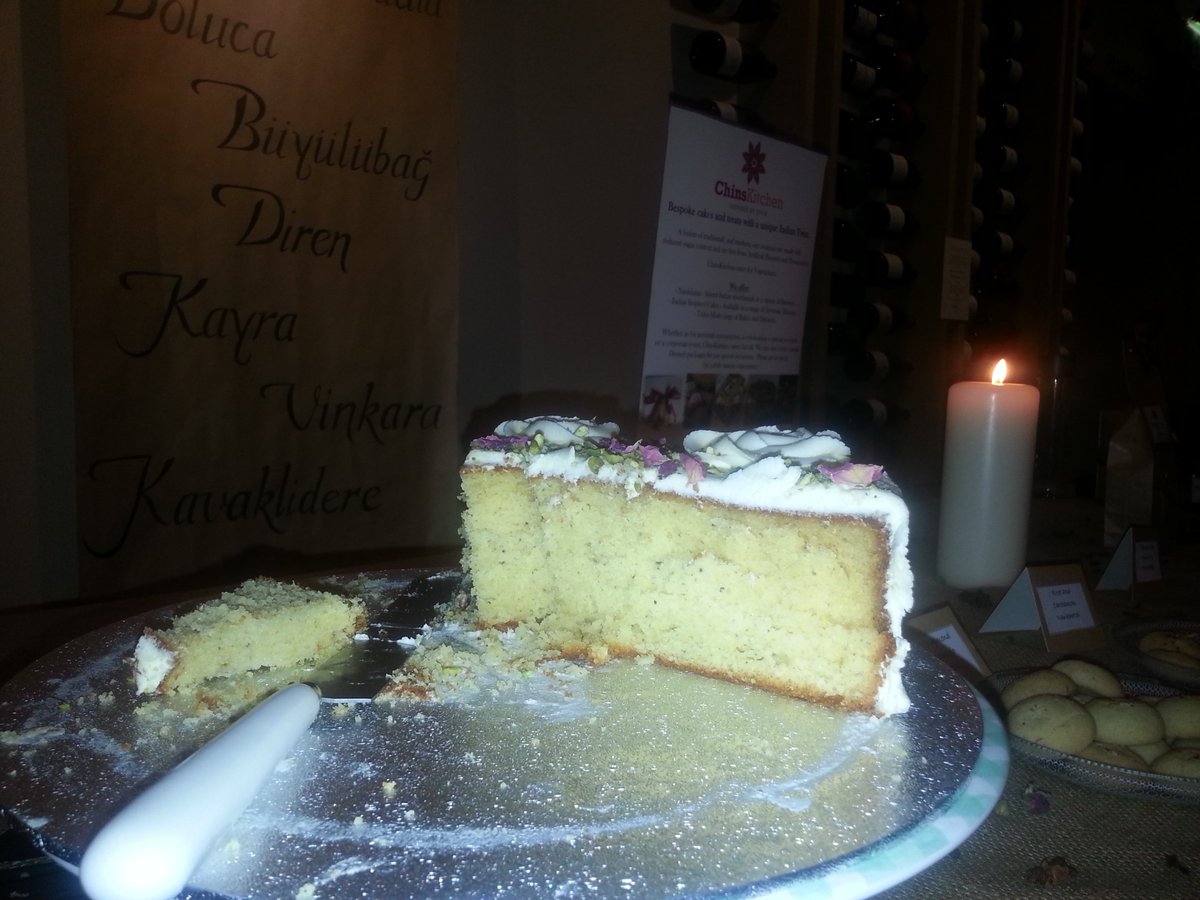 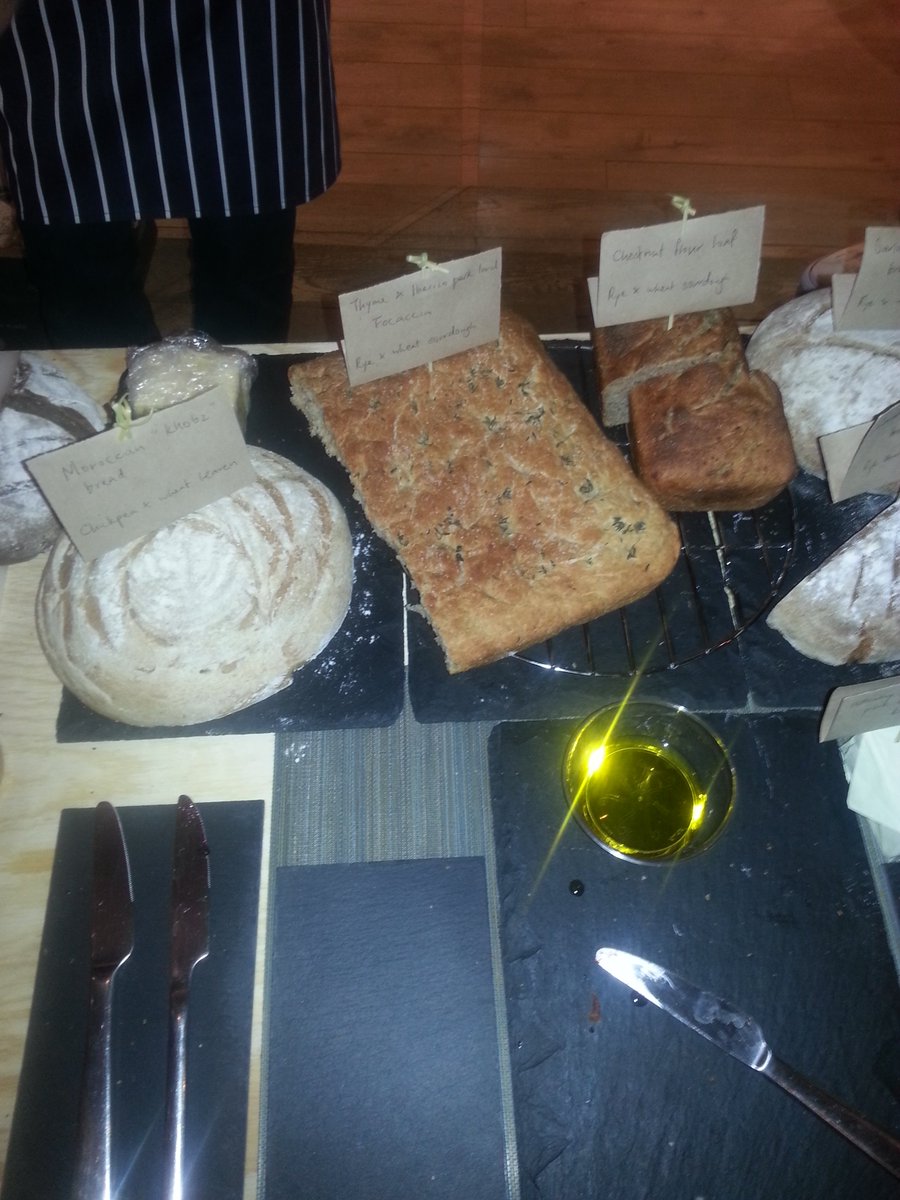 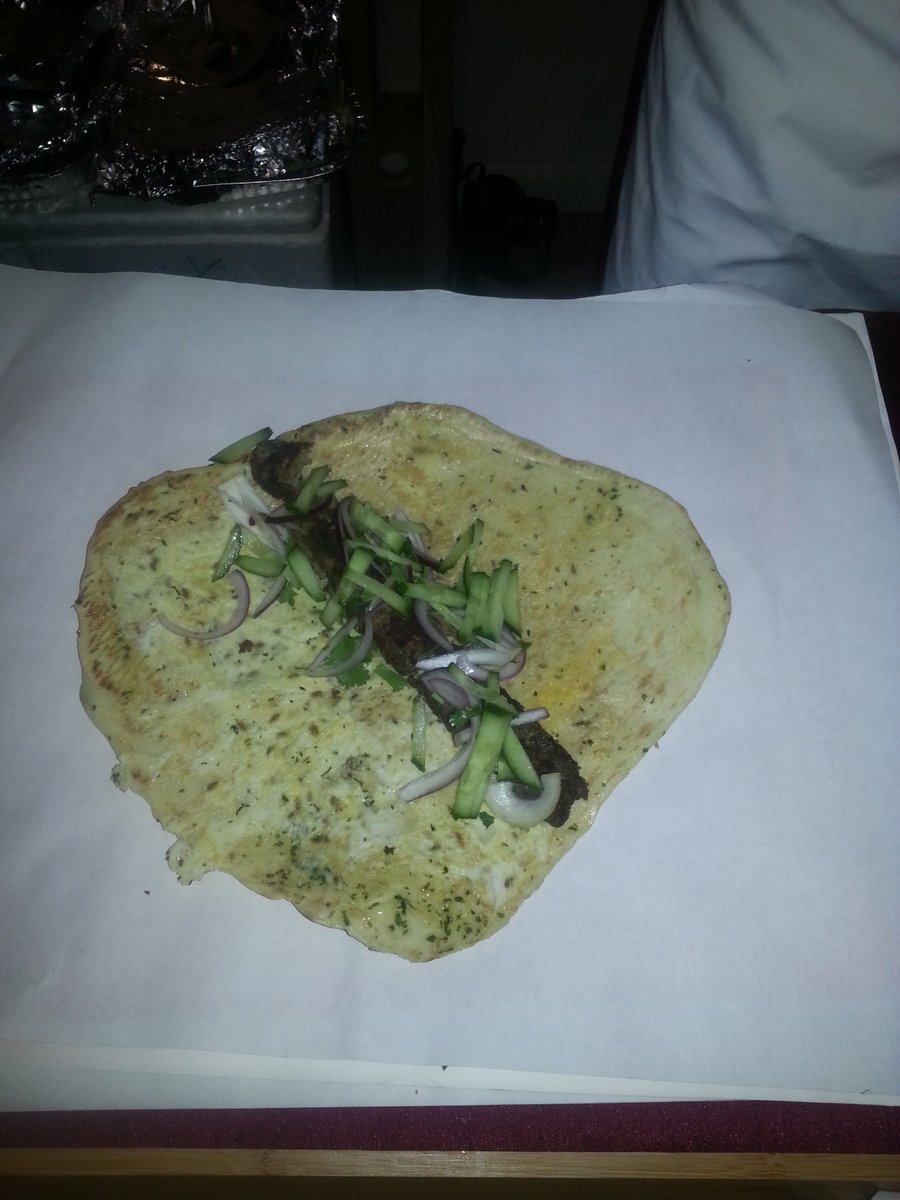 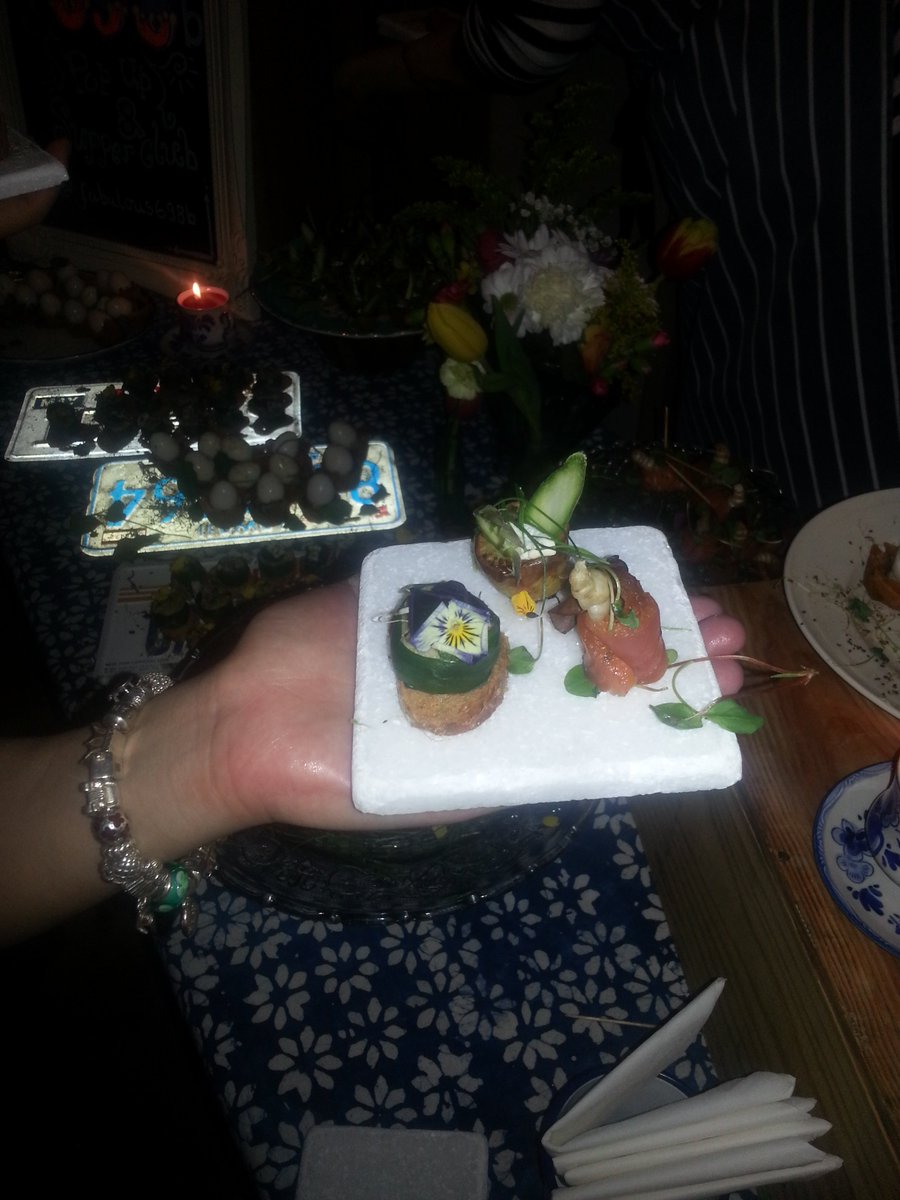 Pork rilletes and salmon canapés from 698B Supper club 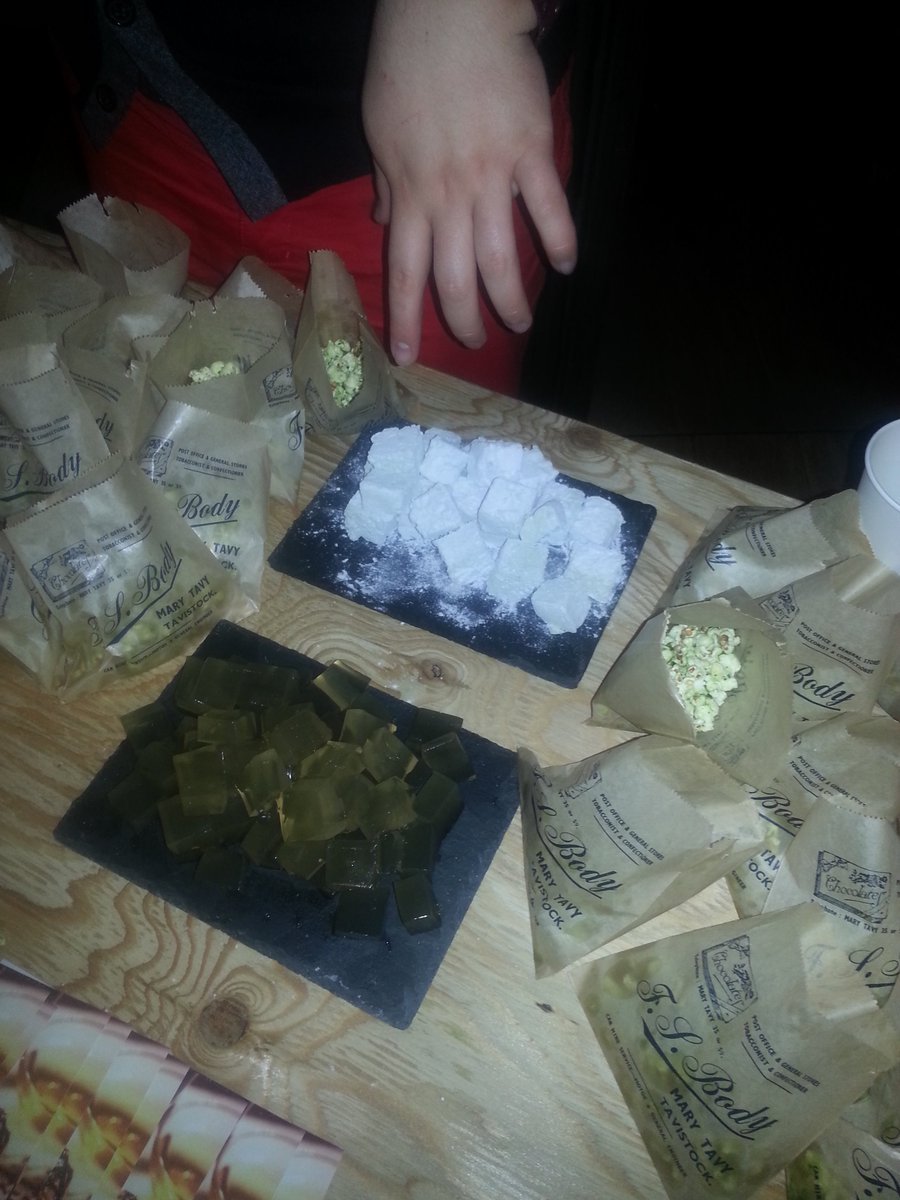 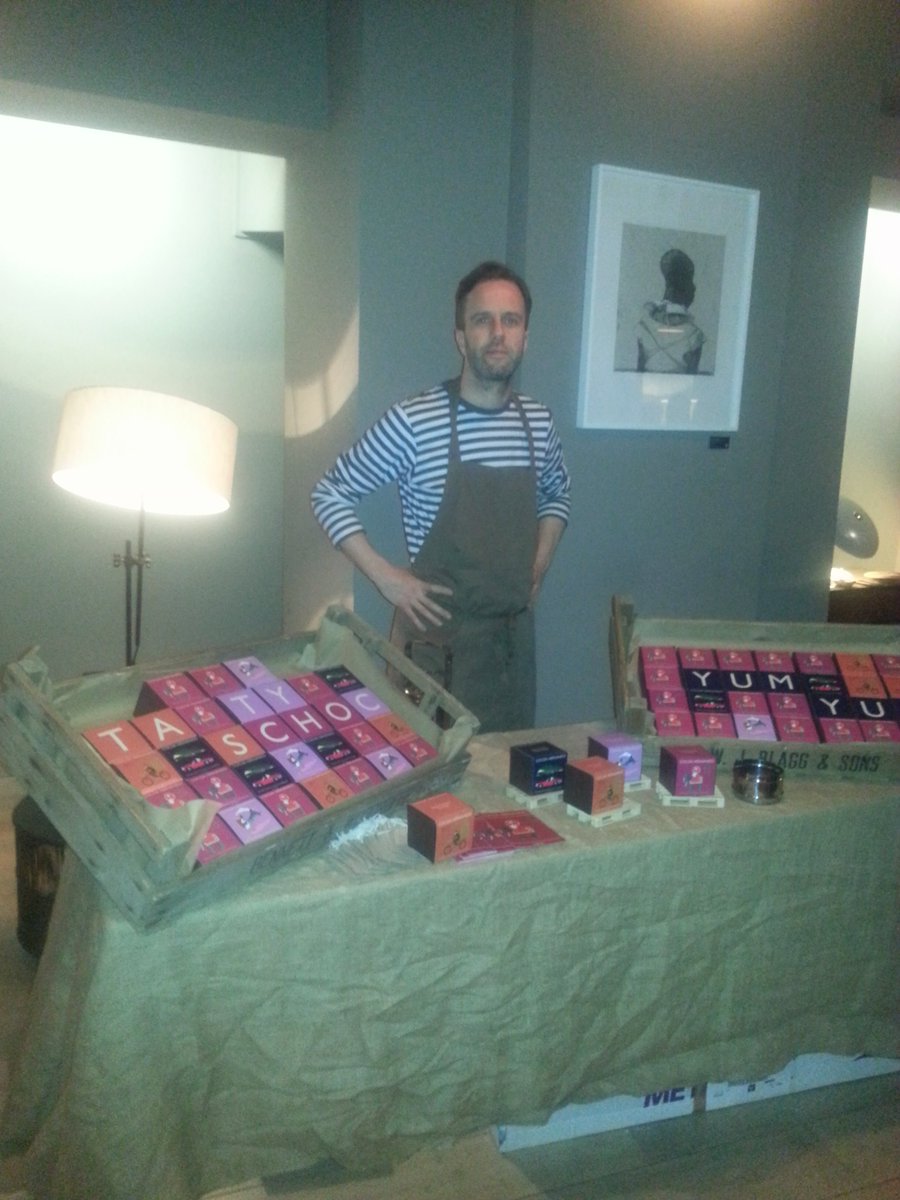 Discover the world through chocolate -what better way! Thanks Paul @CocoaHernando 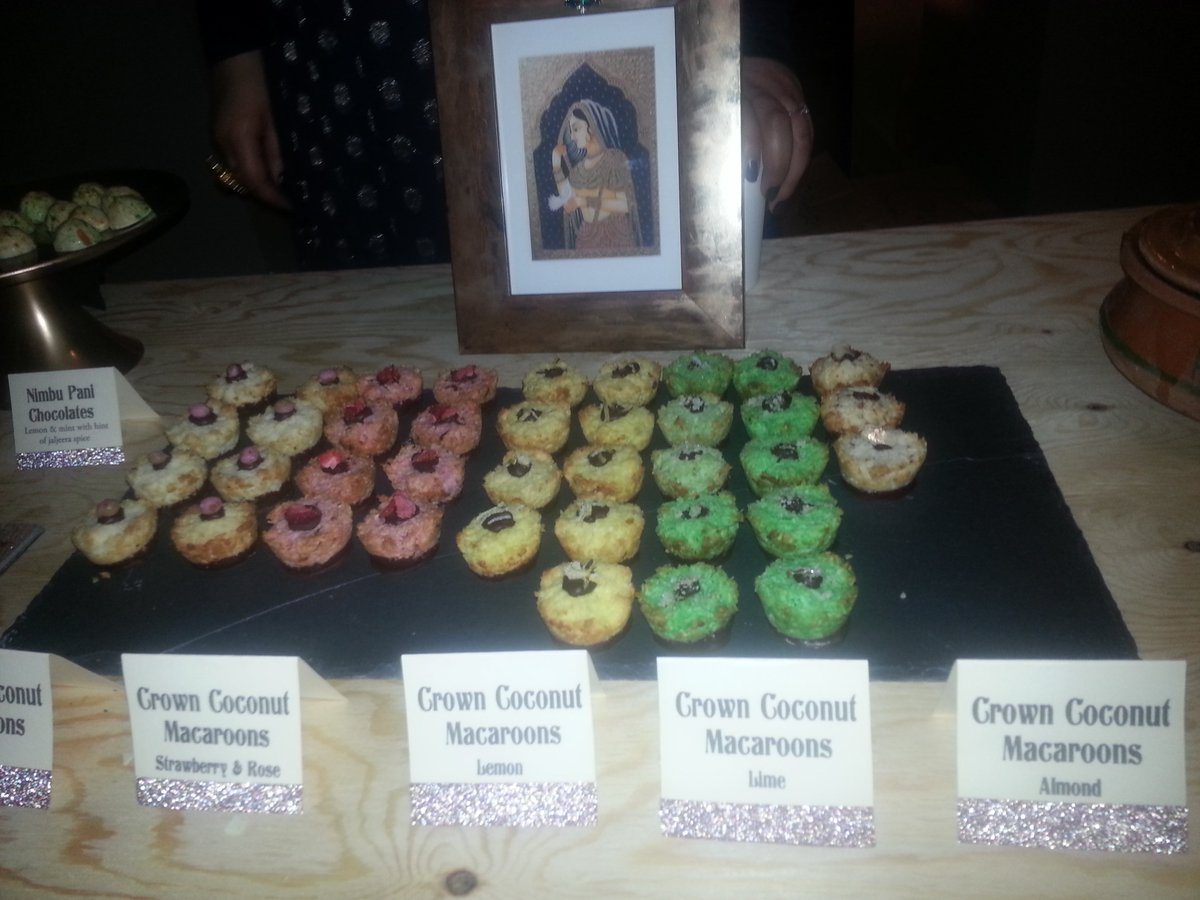 Colourful macaroons with an array of flavours from Anber, Little Black Cat Gourmet. 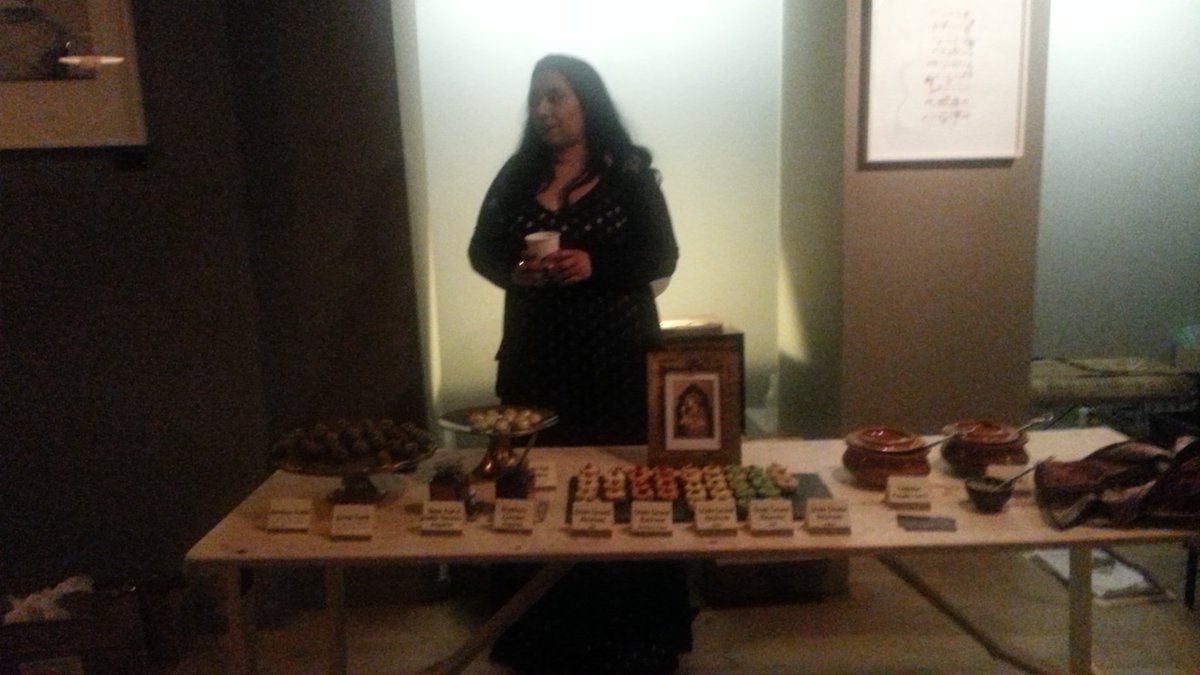 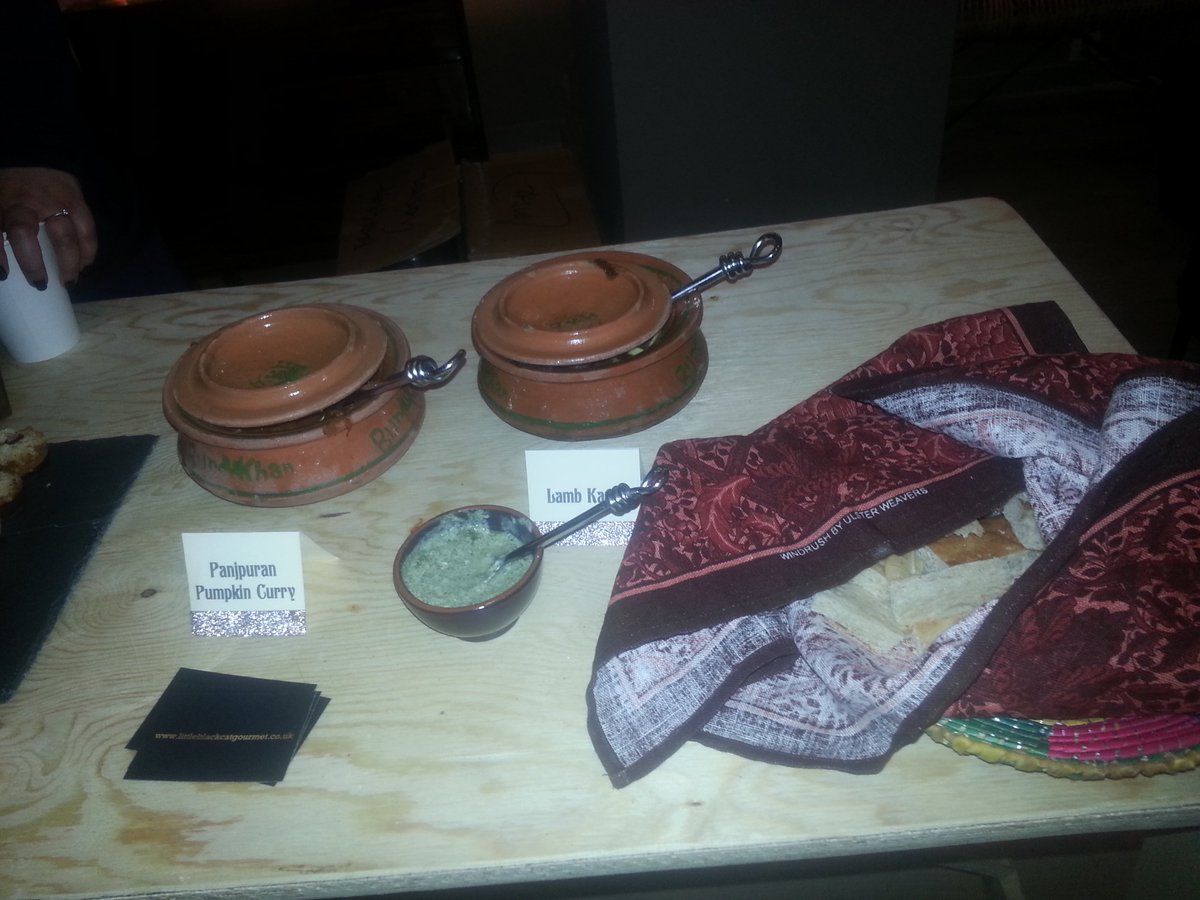 And a surprise revelation… 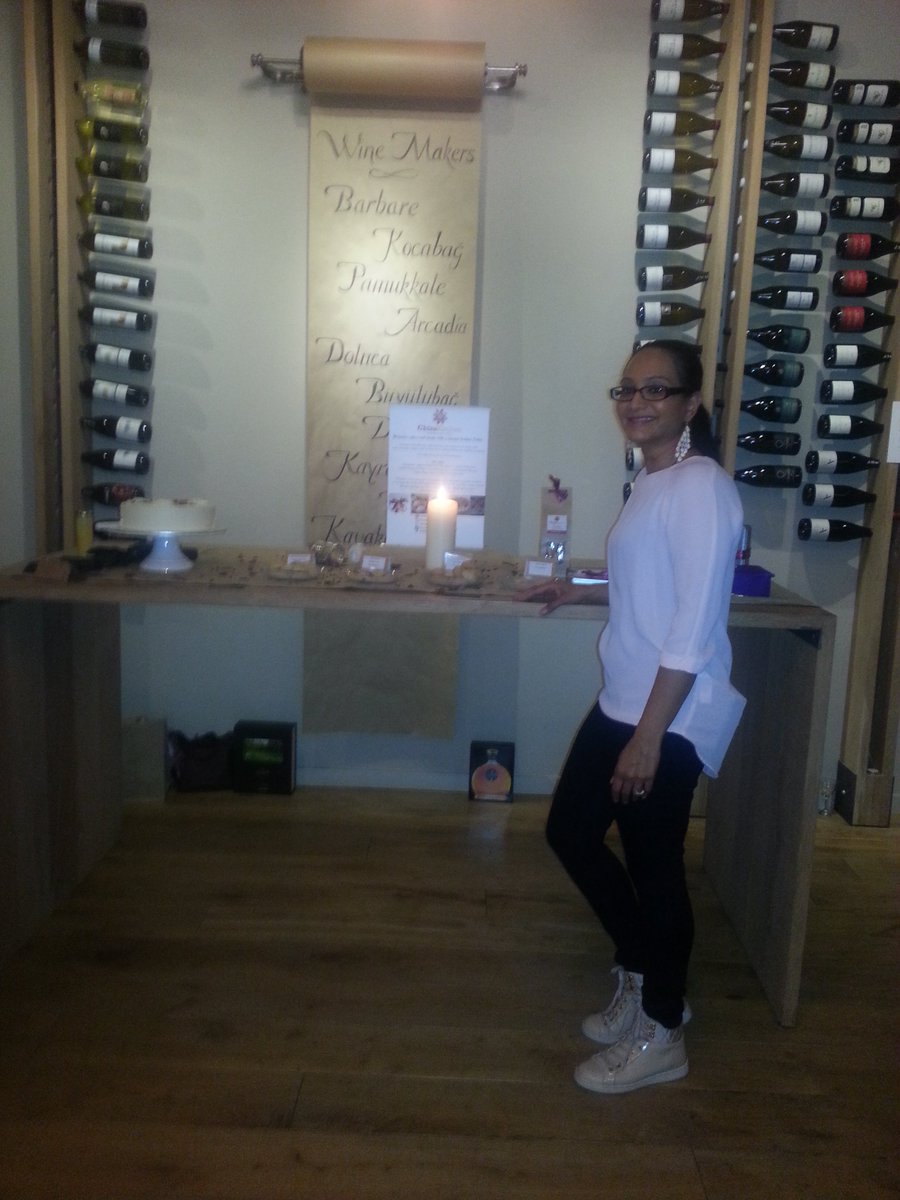 The NHS is just the day job for some of us! – great meeting Chintal, @chintalkakaya /Chin’s Kitchen , an Occupational Therapist and fellow NHS Allied Health Professional.

Can't believe this #salted #caramel icecream, made with virgin coconut oil and stevia leaf, from @oppoicecream only has 41 calories per scoop ! Thanks for showing us the way to a new guilt free icecream treat, and nice meeting you Plum and Tabitha. @155_bar_kitchen #the155club @clerkenwellldn #clerkenwellldn @theTabl @the_tabl #atthetabl #communityfounder #event #eatdrinkrepeat

But it wasn’t all as though we had been transported to lands exotic. In fact hosts 155 Bar and Kitchen did a great job of persuading me to eat razor clams. Normally, I find their appearance a bit off-putting but just look at these beauties.

And supperclubs hosts 698B interactive dessert assembly was a blast. Generally, I would be tempted to just pile my plate high but I did my best to make my composition look pretty. Judge for yourself, but Masterchef is probably safe from my efforts for now! And ignore whatever your mum told you about not playing with your food, it’s so much fun! 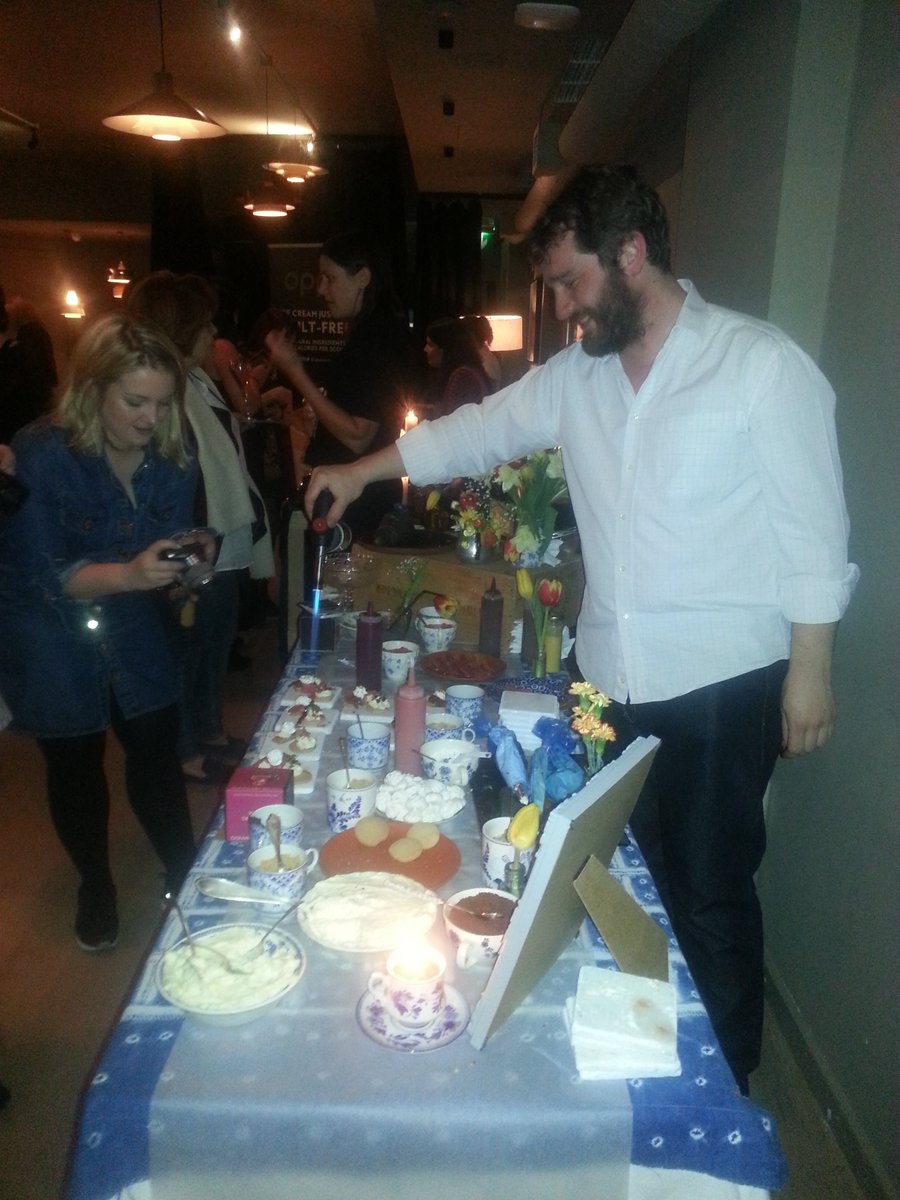 Loads of fun watching Guillaume from 698B Supper club in action with his blowtorch! 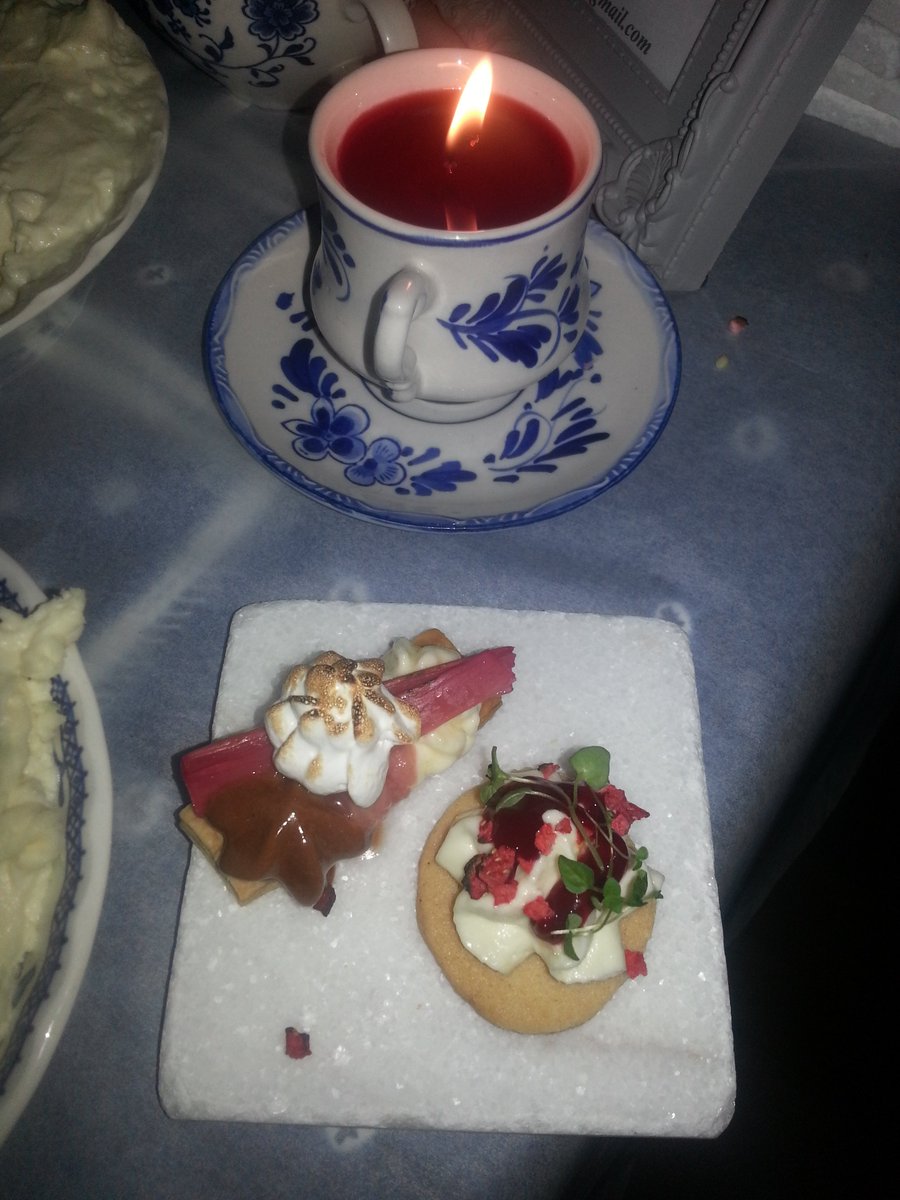 … and the finished dessert treat from 698B Supper club – how pretty!

Plus we got to meet/ catch up with some great people, shout out to Connie, Aftab, Felicia, Andrea, Guan, Jess ,Kasha, Vicky, Jodie, Charlotte, Jaklien and Tim. And many more people whose names we were probably a bit too drunk to remember by the end of the night! Hope to meet you all at another event when we’re a bit more compos mentis. Thank you The Tabl for a great night and for adding lots of supperclubs to our ever expanding list.

And just thought you should know …

International food and travel blog by London based British Goan duo: Jason and Chiara Pinto. Twitter: @goantolondon @jasonpinto100 @chiarapinto About Goa: Goa is a small state on the western coast of India. Though the smallest Indian state, Goa has played an influential role in Indian history. Goa was one of the major trade centers in India, thus it had always been attracting the influential dynasties, seafarers, merchants, traders, monks and missionaries since its earliest known history. Throughout its history Goa has undergone continual transformation, leaving an indelible impression on various aspects of its cultural and socio-economic development. History of Goa: The East-West symbiosis of Goa makes it different from other parts of India, more than the historical and social niche. The history of Goa is a sweet and sour story of colonial heritage, oppressive rulers, a glorious culture, and uneventful immediate past. As a land with the identity of its own, Goa was brought into focus when it was liberated of Portugal from its oppressive rule of around 450 hundred years in 1961. Goa was captured and annexed to the Portuguese in 1510 following the urges of trade and demand of spices and also cottons and indigo. But, Goa has a history that starts much before Portugal even thought of Goa being where it is. Goa was coveted and ruled by a great number of Indian kingdoms and dynasties from the 4th century onwards. The first kingdom to rule Goa and Konkan were Bhojas, who were the feudatories of Ashoka in 4th and 5th centuries AD. The city of Chandrapur (present Chandor) was founded by Prince Chandraditya, son of Chalukya King Pulakesin from 566 to 597 A.D. after this, Goa was ruled consecutively by Silahara Dynasty, Kadamba Danasty, and finally Hoysalas from 1022 to 1342 A.D. From the 14th century onwards, Goa became a great trading center on the west coast, especially in the vast trade of horses imported from the Middle East. This was the time for bigger empires to move in and Vijayanagar Empire conquered it in 1344. But there empire was not going to last too long and in 1347, Bahmani Sultans defeated Vijayanagara forces in 1347 and controlled Goa. Afterwards, it was a time of great prosperity and peace for Gpa, especially during the rules of Yusuf Adil Shah and Ismail Adil Shah. They created beautiful houses, fortified Goa, and encouraged local craftsmen. Their liberal and progressive rule was not going to last too long and situation changed in 1510 A.D. Goa for all purposes was not on the Portuguese Radar even after a long time of their presence in India. When the Portuguese nobleman Alfonso de Albuquerque and his cousin Francisco de Albuquerque were sent with a powerful fleet in 1503 on the orders of King Dom Manuel I, the purpose was to defend the cargoes of spices, mostly pepper, against Arab Muslim raiders. The center of spice trade was Calicut at that time and Portuguese had built forts in Cochin and Cannanore. It was in 1506-08 that an opportunistic pirate, Timoja, persuaded Albuquerque to attack Goa and acquire a better land base. This made Goa, Portugal's first real territorial acquisition in Asia. After a brief period of recapturing by the Muslims, Goa Albuquerque finally captured Goa in 1510. The inquisition of Goa in 1540 reversed the previous liberal policy of Albuquerque and imposed strict censorship of literature and new laws to forbade non-Christians from professions. Forced conversions took place continuously, censorship was established on literature, the temples were destroyed, and non-Christian priests, holy men, and teachers were evicted. This led to continuous fleeing of Hindus from Goa to other parts of India. It is not that the relationship with Portugal brought only destruction for the Goans. Portuguese also built great churches like the church of St. Cajetan and Bom Jesus basilica in Old Goa, which is a pilgrimage site for the Christians from around the world. But it is also true that pre-1961; Goa was a highly impoverished region very backward and primitive. It is after the liberation that Goa of today has emerged and it has surprised even the locals many of whom had left their homeland before its liberation. Portugal and India are today friends and Goa continues to be a fascinating blend of Latin and Oriental. Information sourced from: http://www.royalorienttrain.com/goa/goa-history.html
View all posts by goantolondon →
This entry was posted in Clerkenwell, Clerkenwell London, England, fusion cuisine, Global inspirations, london, London, Meat, menus and prices, Style of cooking, supperclub, The Tabl, The Tabl - Social Media, Venues for special occasions and tagged #atthetabl, #cocktailhour, #communityfounder, #communityfounderevent, #food #bloggers, #foodbloggers, #RSD16, #SaturdaySessions, #VinylLounge, 155 Bar and Kitchen, @155_Bar_Kitchen, @alajode, @andreaspassions, @BrightonGin, @CharAimeeClarke, @ChefConsultant, @chintalkakaya, @ClerkenwellLDN, @CocoaHernando, @connieconsumes, @Dalton_Banks, @Fabulous698B, @FreshnFearless, @guan_chua, @HerenciaTequila, @JessEatingeast, @KashaCapeTown, @kekelovescake, @Kimberlybhurd, @LBCatG, @LuxTravelFoodie, @marieslittlejar, @MasterChefUK, @miammiamyum, @MrTimChow, @nixandkix, @OpiumChinatown, @OppoIceCream, @OttouCarine, @OzoneCoffeeUK, @PalomaKara, @passandbrush, @PlaylisterFM, @raastawala, @TazzGault, @teastudio, @theboywhoatetheworld, @theTabl, @the_cheeksterx, @vosswater, Aftab, Brighton Gin, Brighton rock, Brighton rocktail, Chef Damian Wawrzyniak, Clerkenwell, Clerkenwell London, cocktail, community founder, Damian Wawrzyniak, drink, event, food, G&T, Guan Chua, London, producers, razor clams, sensory playground, supperclubs, tartare, The Cheekster, The Tabl, TheCheeksterX, venison, venison tartare. Bookmark the permalink.