We went to review dinner at Tavern at 15, the basement restaurant and bar of the London Capital Club (one of the City’s private member’s clubs) where diners can experience the culinary delights of a private members club kitchen without the associated annual membership fees.

We were intrigued to see what Mauritian born Head Chef Jean-Didier Gouges, previously responsible for the kitchens at Royal Albert Hall, classically trained in French culinary techniques, would have in store for us. Having perused the menu we had set our hearts on the Scottish lobster on the menu

Jean-Didier has created a menu of British faire with global influences at Tavern at 15. Their signature dishes include: Stonebass Carpaccio (£8.50), Scottish Lobster Burger, Whole Scottish Lobster (£35) and 28 day aged Sirloin (£22).

(The above photographs are courtesy of Yuri and London Capital Club.)

Loved the bright airy feel when you walk in, plus we checked out the food and wine pairing events, it was also great that they have a corvent that allows you to sample some of the more expensive wines by the glass rather than the bottle. 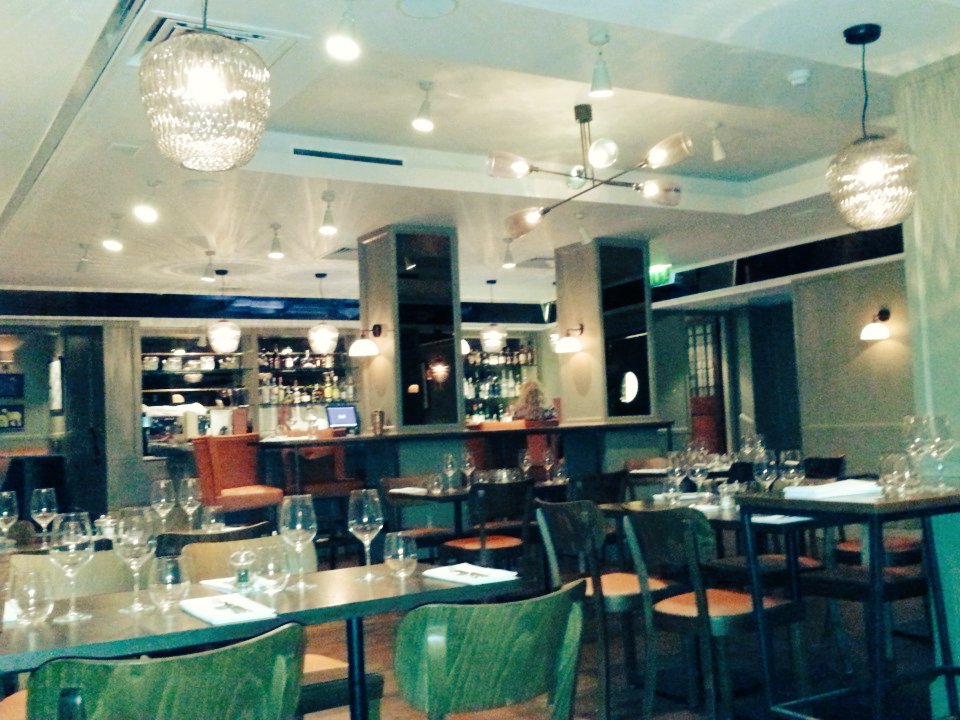 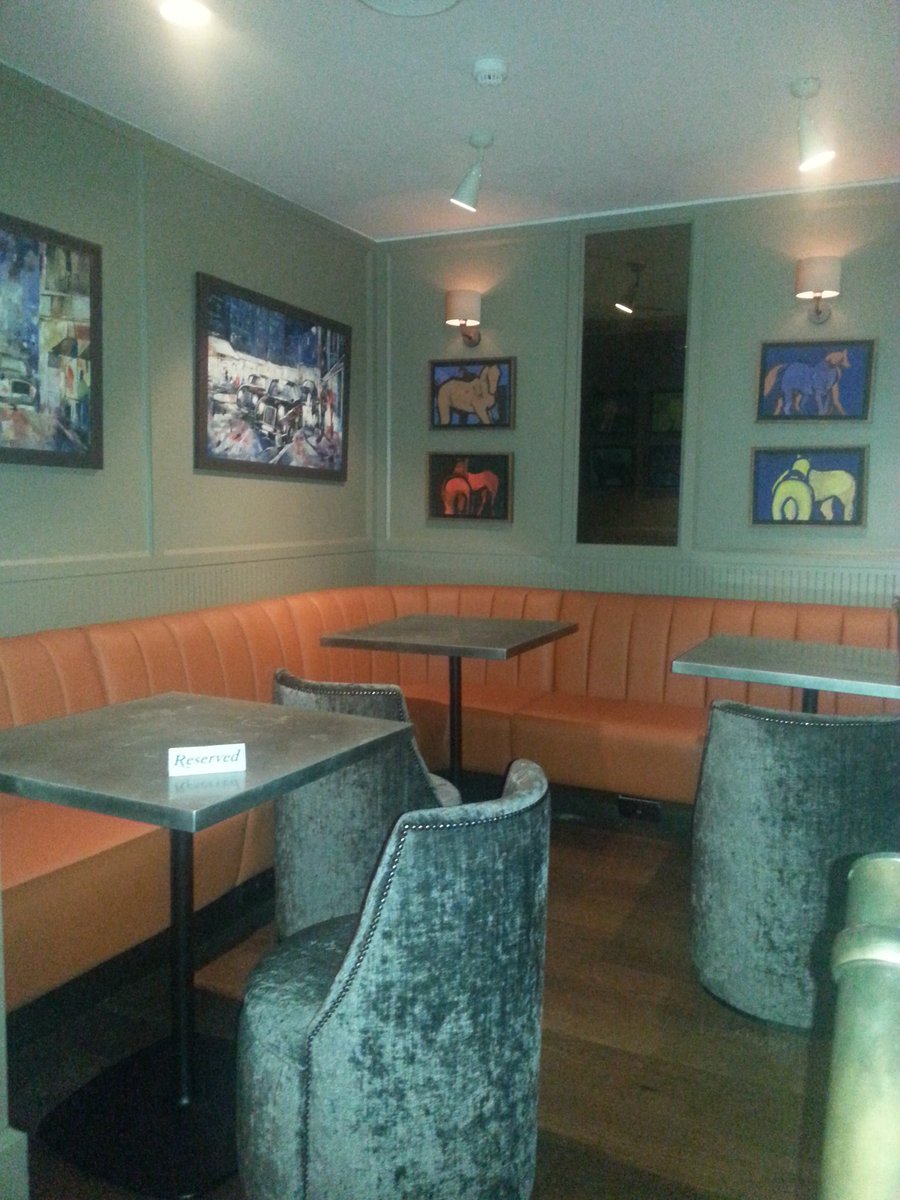 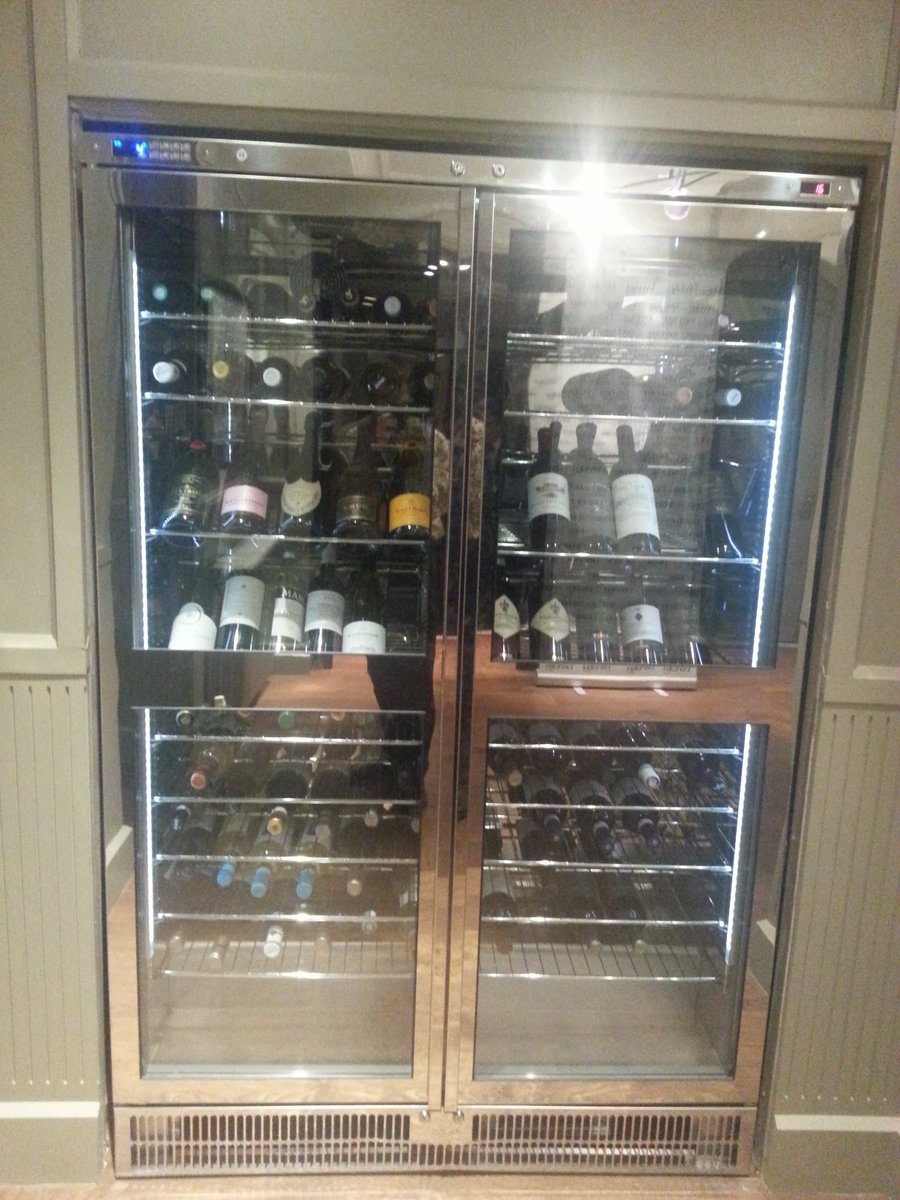 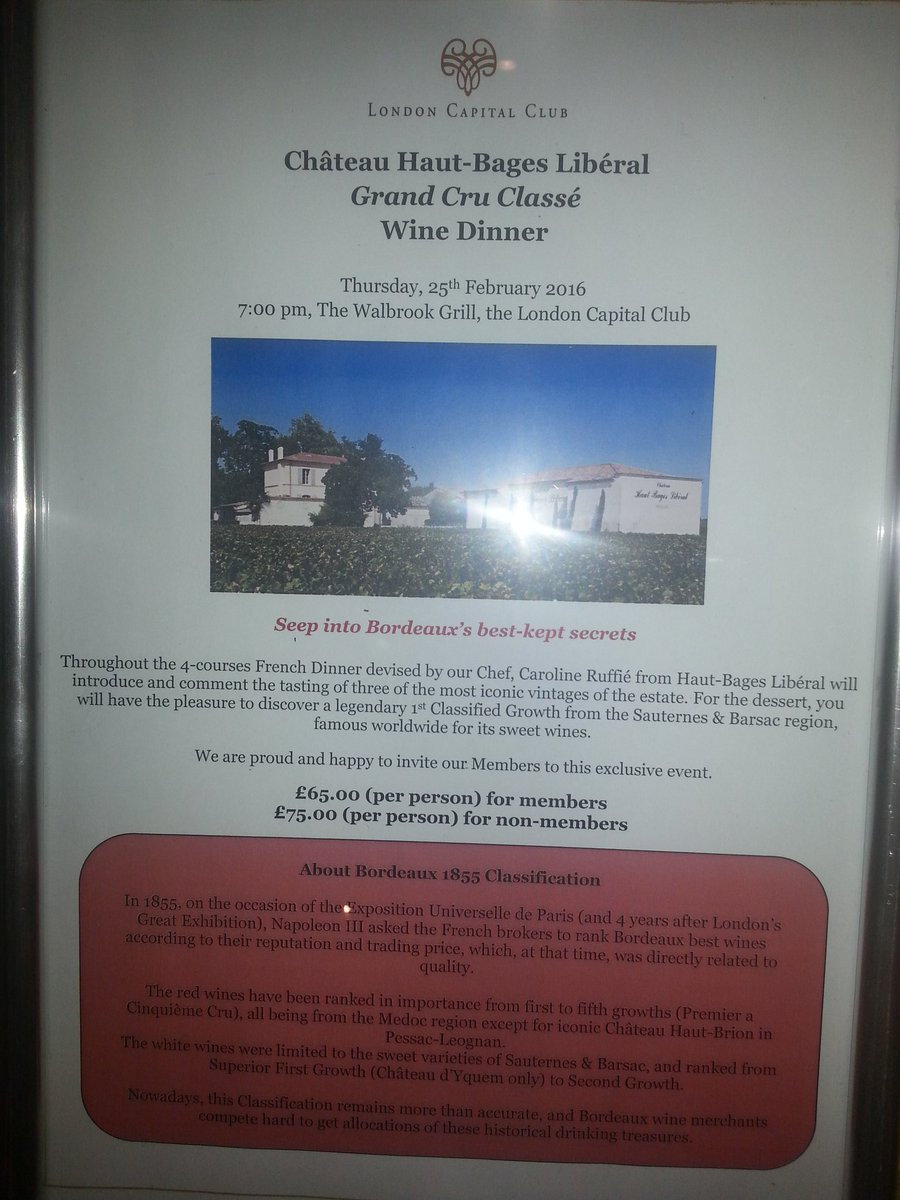 Settling down in our comfy sofa seats, we perused the dinner menu whilst sipping on a beautiful Deakin Estate Brut Chardonnay Pinot Noir NV (£24.50),which was bubbly, light and refreshing, accompanied by flat breads and gruyere toasts.

(The above photograph is courtesy of Yuri and London Capital Club.) 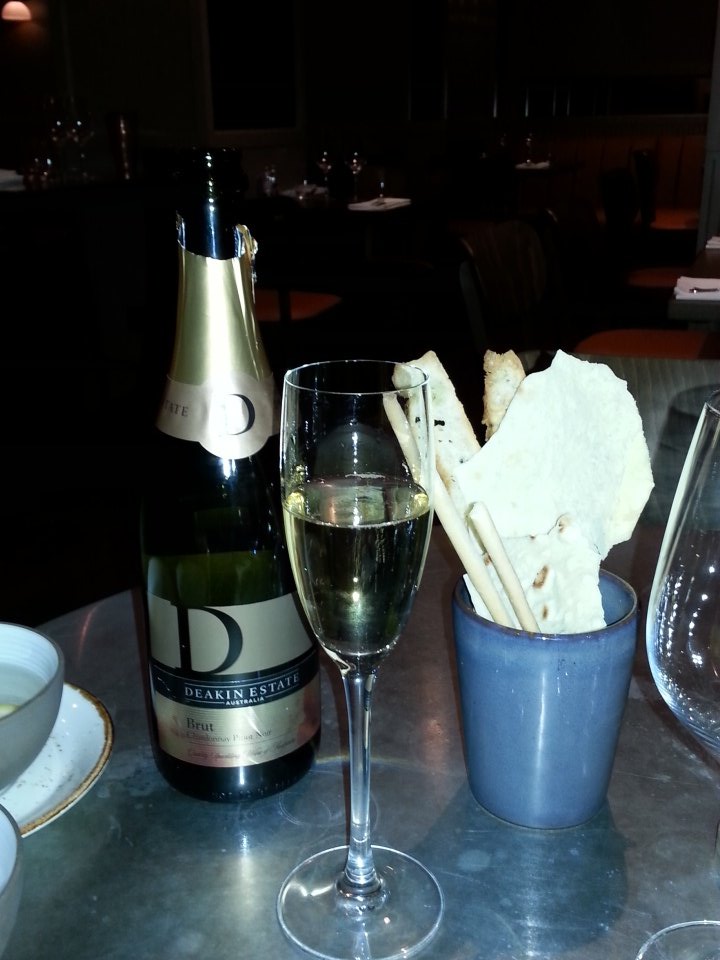 Vlad sadly broke the news that they had run out of all their whole Scottish lobsters at lunchtime, but said that the kitchen would be able to provide us with a lobster linguine and lobster burger instead. We were content as we had drinks in hand and we were still getting to try one of their signature dishes.

We started with delightful mussels in white wine, with french fries, (£9.50) , and velvety chicken liver parfait that came with peach gel and warm brioche toasts (£12.75). Though, we had to ask for more bread, so as not to waste the wonderful broth of the mussels. 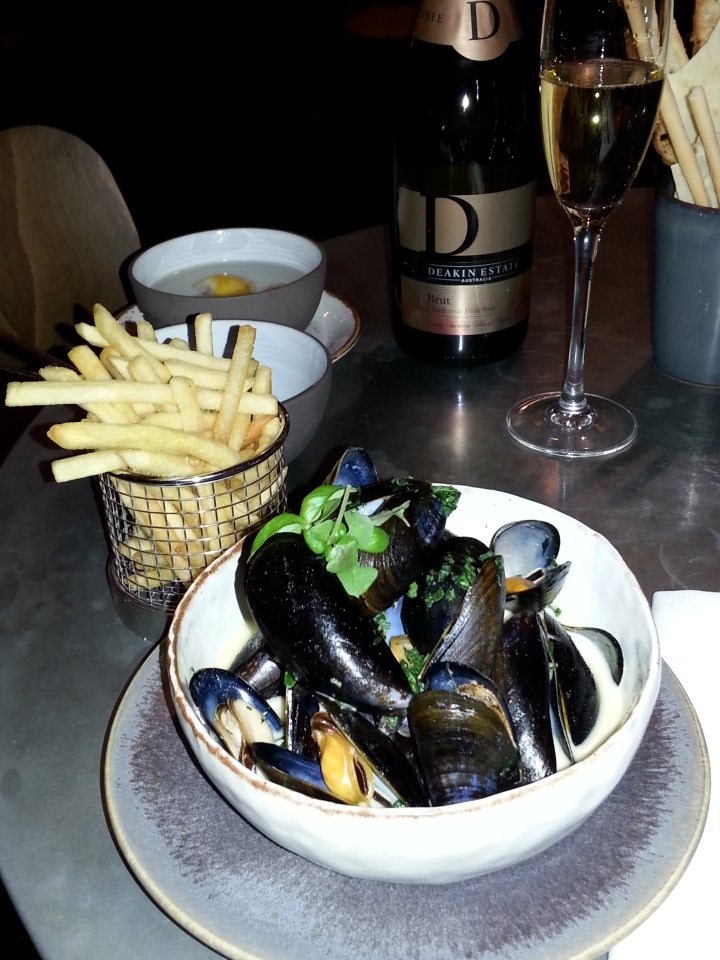 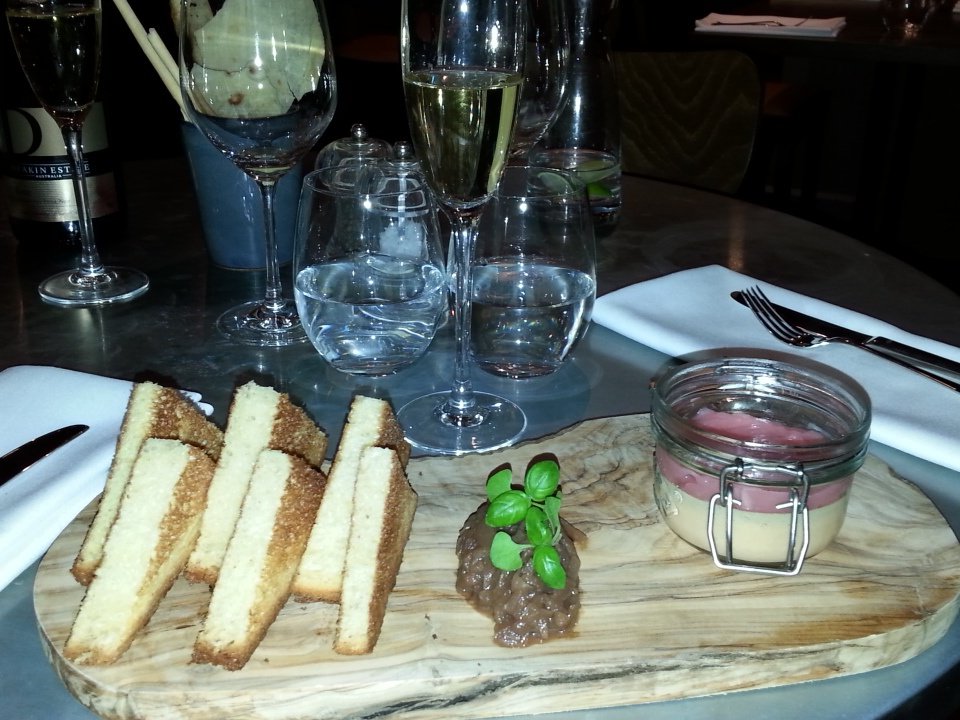 We then had an interesting conversation with Roy Sommer, their Food and Beverage Manager, about his input into the wine list and food and wine pairings for events at Tavern at 15.

When our mains arrived, C was still sad they didn’t have her whole lobster, but agreed that her lobster linguine (£35) looked pretty good! It brought back holiday memories of sitting by the sea in the Mediterranean. However, she had lobster envy, as my lobster burger had more lobster in it than hers (the small piece of lobster on top, plus the small piece at the front of the dish, that you can see in our photo were the only specimens of lobster in this dish).  She did report that it was enjoyable, fresh with its chilli and tomato sauce, but that the pasta could have done with more of a chilli kick. When she asked for some fresh chilli, all the kitchen was able to produce was a bottle of Tabasco.

Jean-Didier, please could you next time have some fresh chilli or chilli flakes to augment the dish, as well as add more lobster to justify the £35 pricetag. Many thanks. 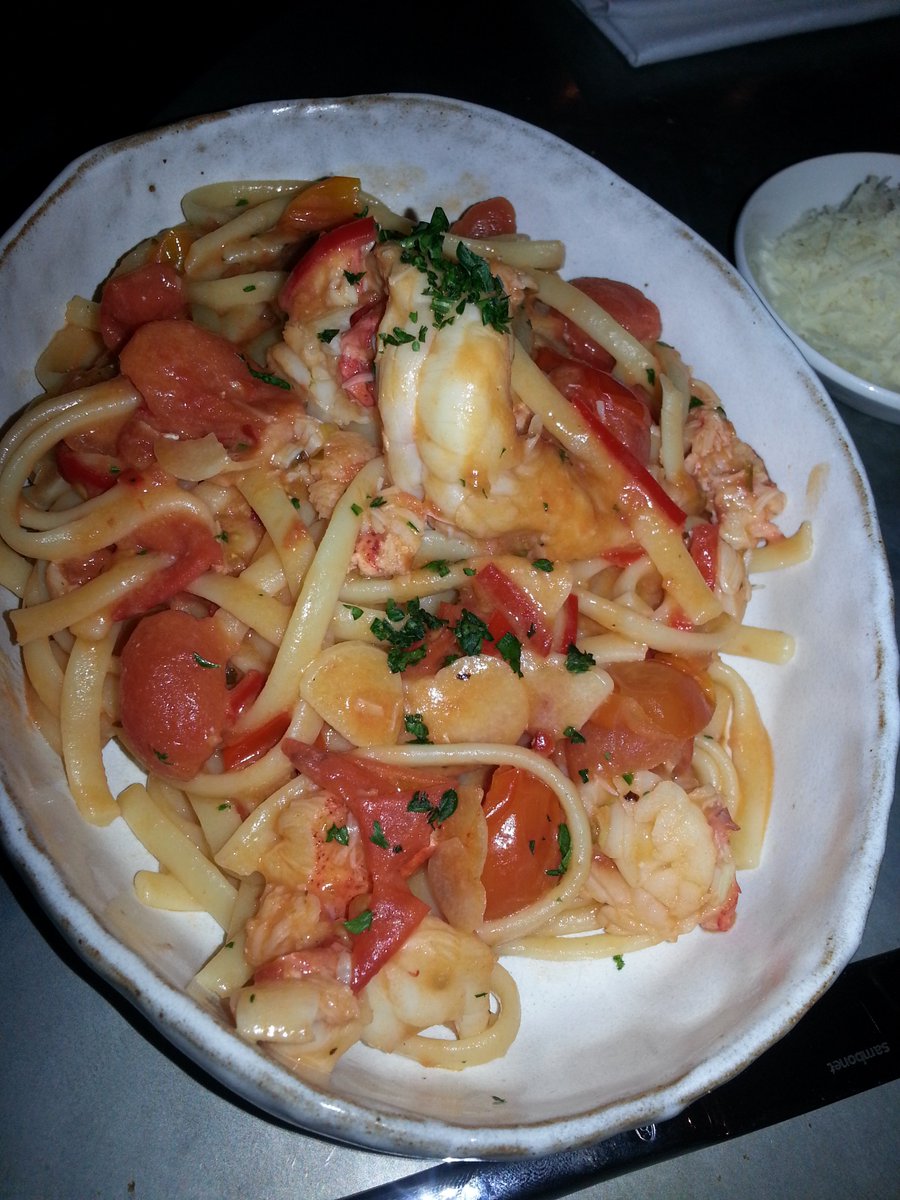 My lobster burger (£28.95) came jam packed with beautiful, juicy lobster pieces and proper chunky chips. The addition of the crab butter was a great twist created by Jean-Didier and brought the burger to life with each mouthful. Loved the texture of the toasted demi-brioche bun also. 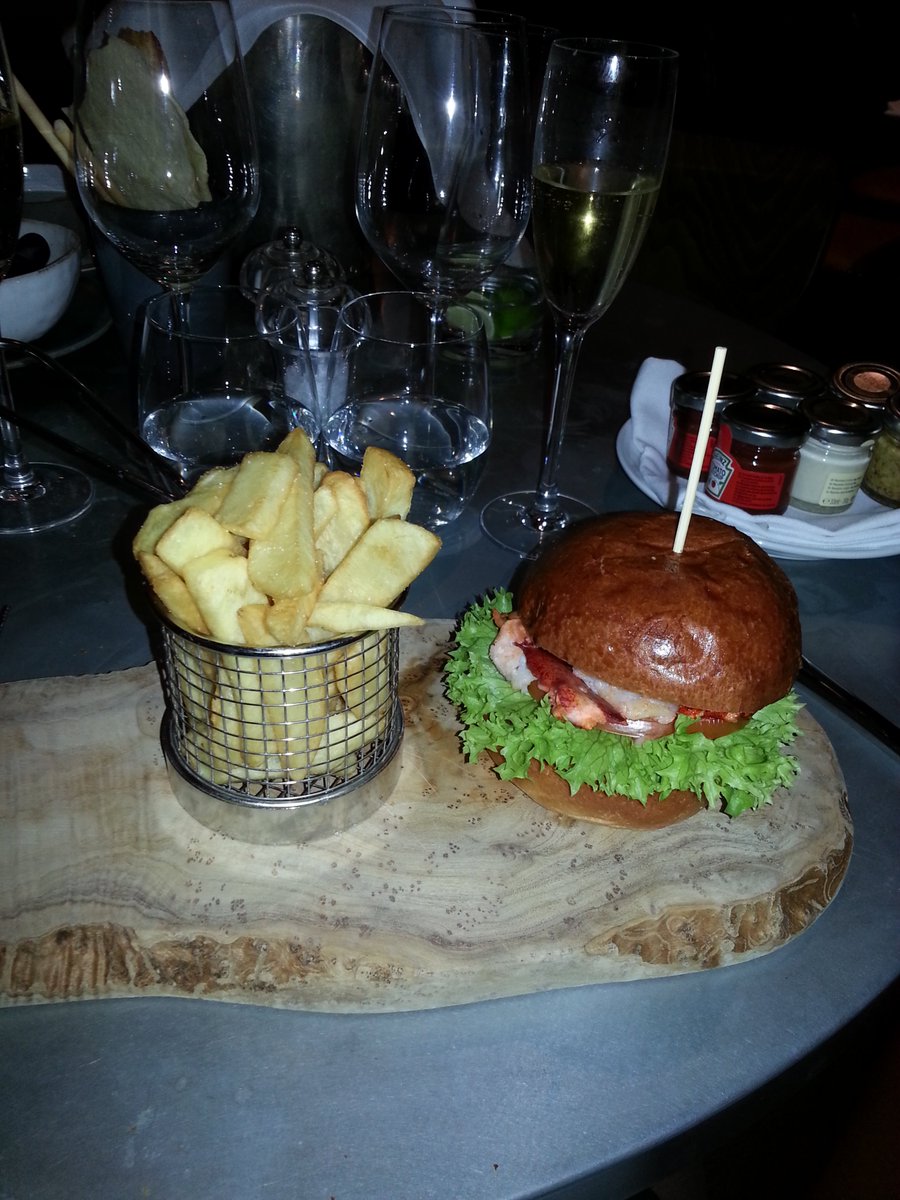 … and the money shot : lobster burger cut through ! 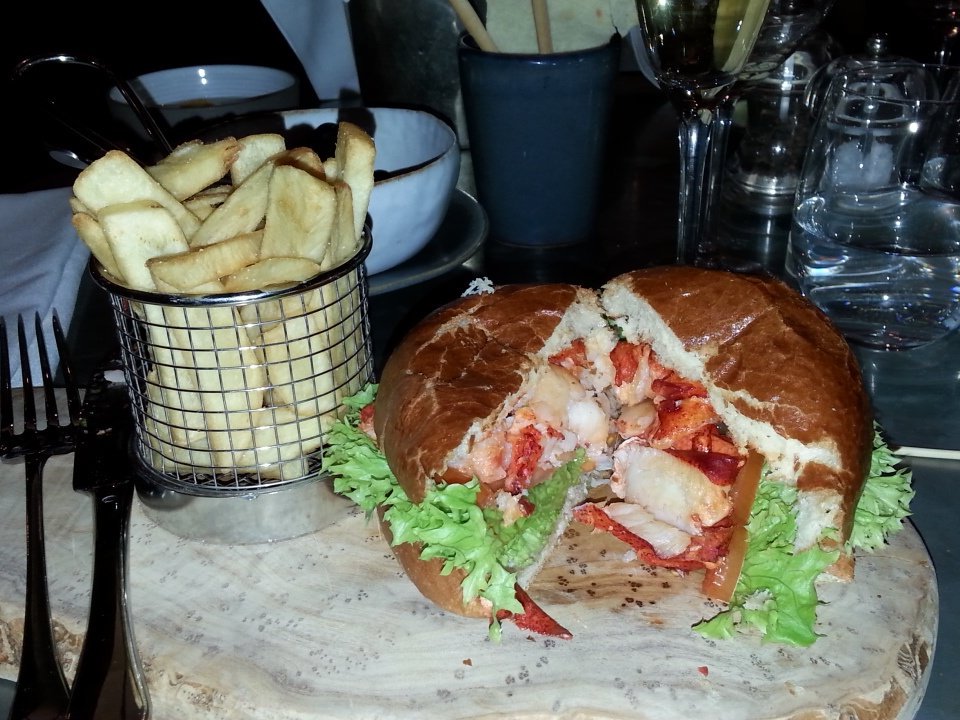 Loved the friendly, attentive service from Vlad, who also had great showmanship whilst creating some wonderful cocktails for neighboring tables. 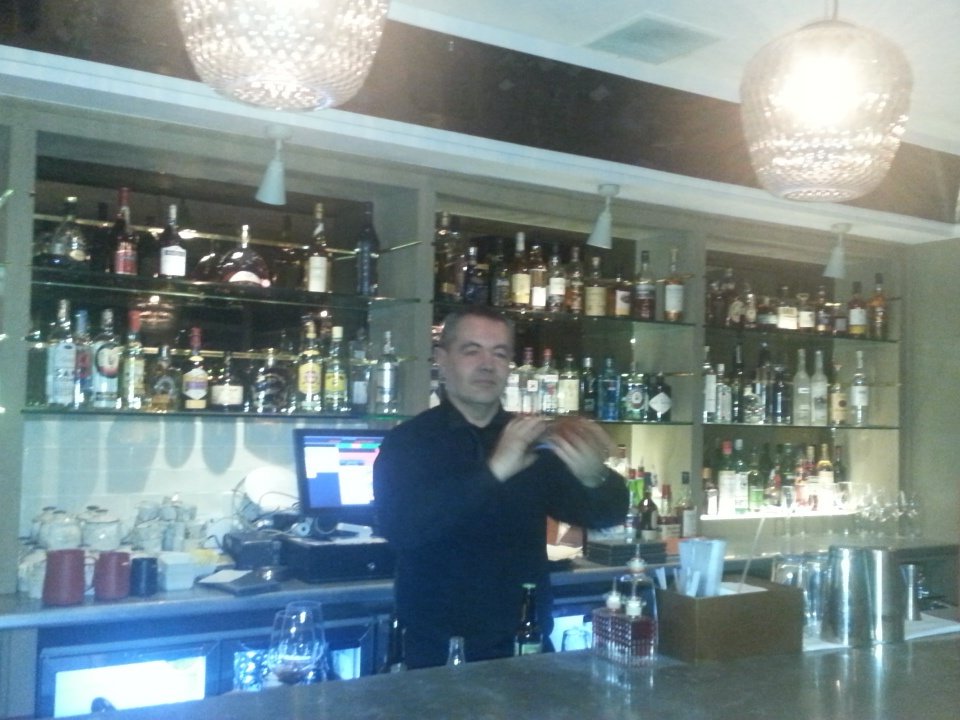 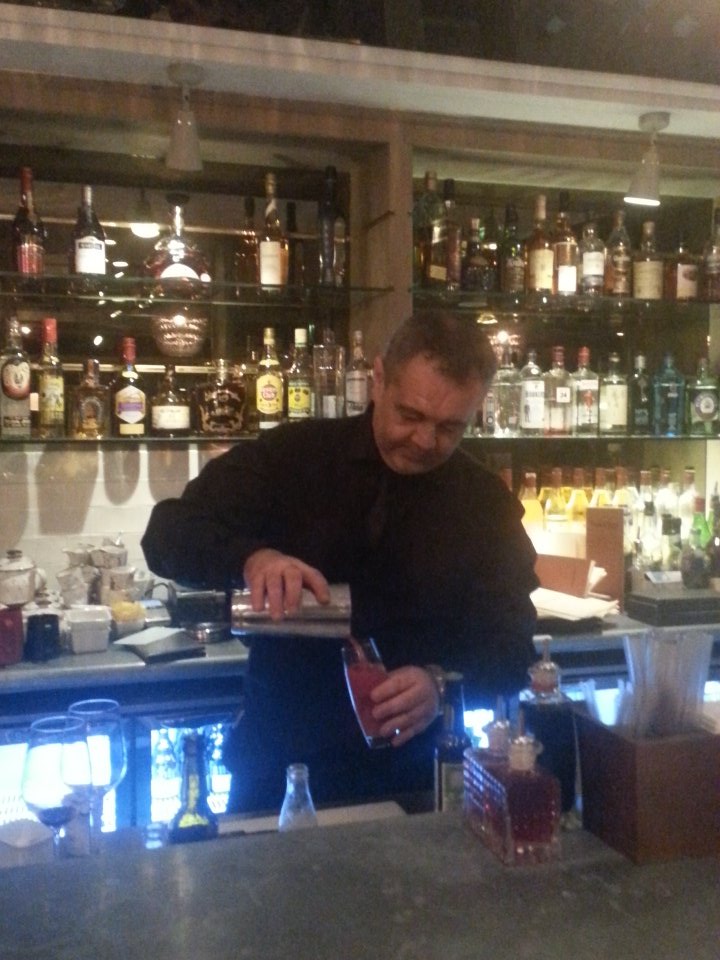 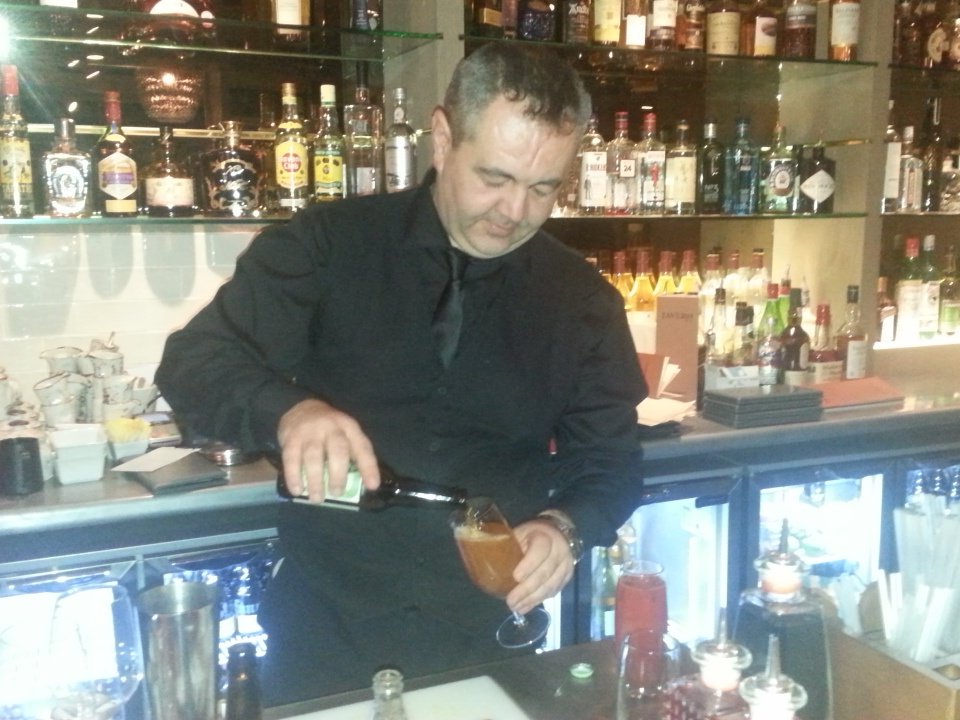 I loved my creme brulee (£7.50) with its crisp sugar top, that is creates so much pleasure when you hear it crack as you tap it with the back of a spoon. Life’s little pleasures! It went perfectly with my single shot espresso macchiato (£2.95). 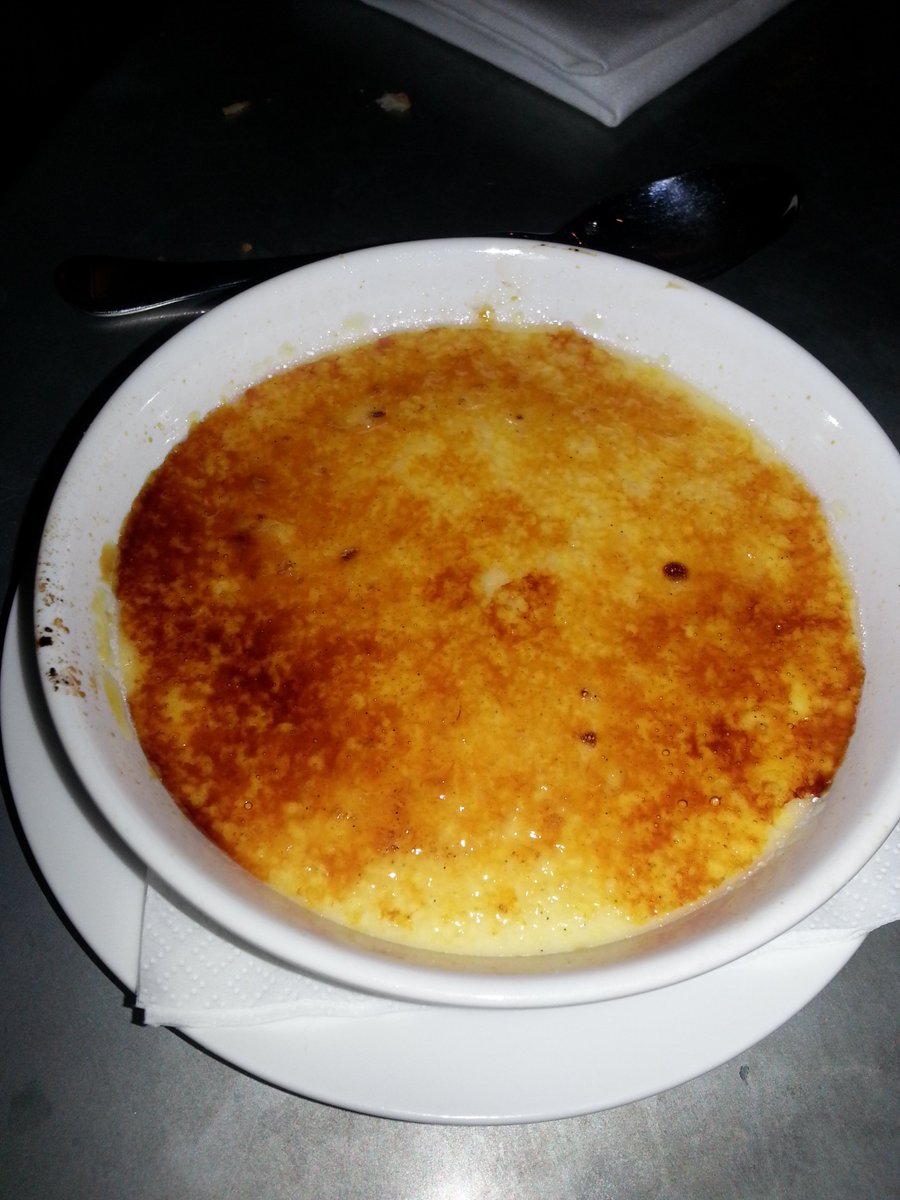 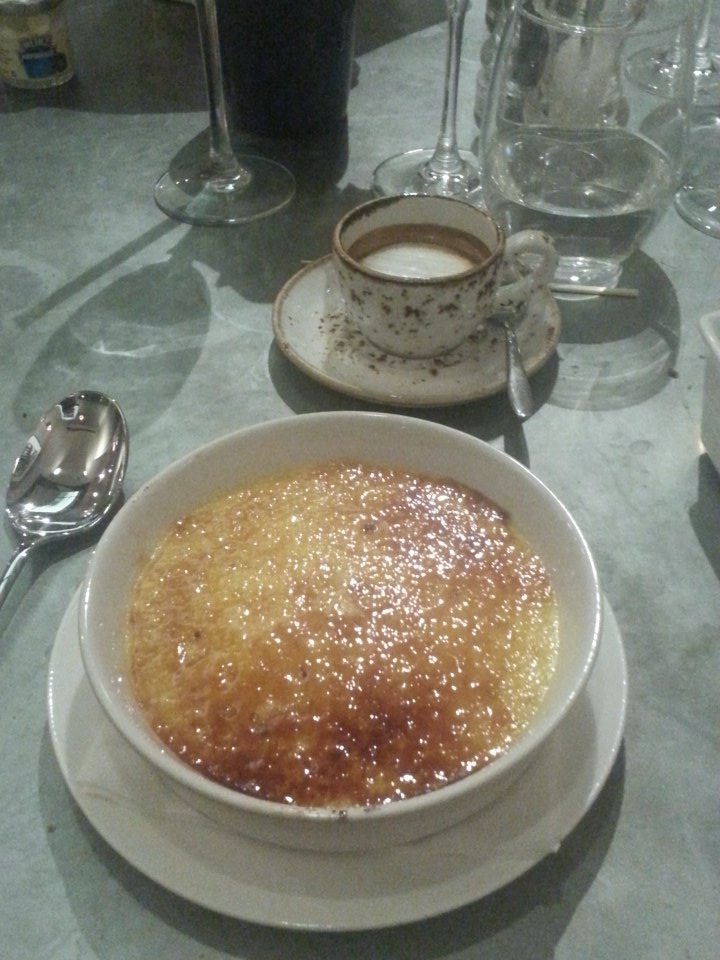 C’s tiramisu (£8.95) came nicely presented in a large coffee cup. She mentioned that her tiramisu  was pleasant to eat, but had a bit too much cream for her liking; she prefers the traditional Italian tiramisu with a higher cake to cream ratio. She had this with a filter coffee (£4.00). 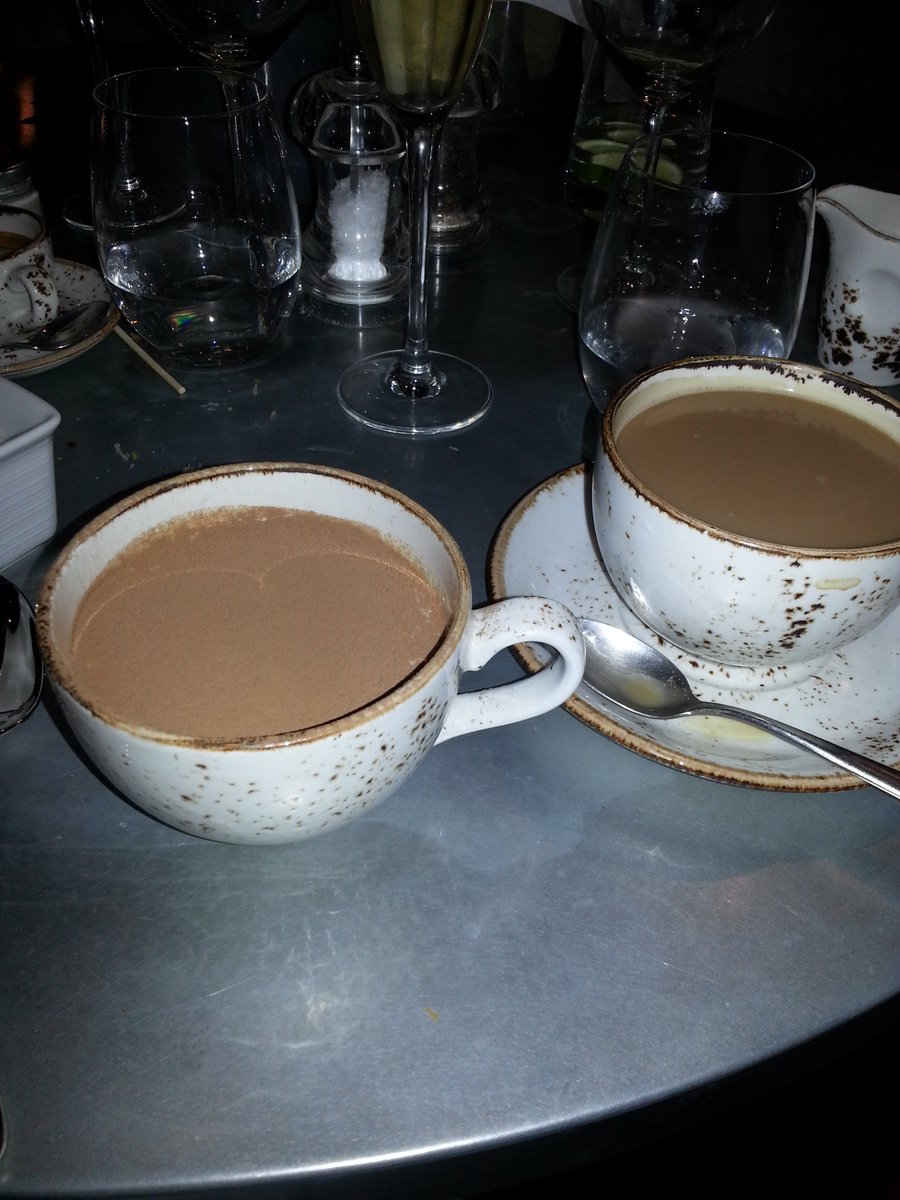 Overall, an enjoyable dining experience with pleasant service, and we would recommend visiting.

Though a note, if you want the lobster it may be an idea to pre-request it at booking, as we will be doing next time!

Go check out their next food and wine pairing event on Thursday 25th February, 2016 held in The Walbrook Grill on the theme of Bordeaux wines from the Château Haut-Bages Libéral in Pauillac and matched French culinary delights by Jean-Didier. Château Haut-Bages Libéral pride themselves on having biodynamic, sustainable vineyards. We adore Loire Valley wines, so this event sounds intriguing!

For membership and other information, please visit:

Thank you to Jean-Didier, Roy and Vlad for your hospitality, and to Yuri and Fabrizio for organising our meal. Looking forward to seeing you all again soon.

International food and travel blog by London based British Goan duo: Jason and Chiara Pinto. Twitter: @goantolondon @jasonpinto100 @chiarapinto About Goa: Goa is a small state on the western coast of India. Though the smallest Indian state, Goa has played an influential role in Indian history. Goa was one of the major trade centers in India, thus it had always been attracting the influential dynasties, seafarers, merchants, traders, monks and missionaries since its earliest known history. Throughout its history Goa has undergone continual transformation, leaving an indelible impression on various aspects of its cultural and socio-economic development. History of Goa: The East-West symbiosis of Goa makes it different from other parts of India, more than the historical and social niche. The history of Goa is a sweet and sour story of colonial heritage, oppressive rulers, a glorious culture, and uneventful immediate past. As a land with the identity of its own, Goa was brought into focus when it was liberated of Portugal from its oppressive rule of around 450 hundred years in 1961. Goa was captured and annexed to the Portuguese in 1510 following the urges of trade and demand of spices and also cottons and indigo. But, Goa has a history that starts much before Portugal even thought of Goa being where it is. Goa was coveted and ruled by a great number of Indian kingdoms and dynasties from the 4th century onwards. The first kingdom to rule Goa and Konkan were Bhojas, who were the feudatories of Ashoka in 4th and 5th centuries AD. The city of Chandrapur (present Chandor) was founded by Prince Chandraditya, son of Chalukya King Pulakesin from 566 to 597 A.D. after this, Goa was ruled consecutively by Silahara Dynasty, Kadamba Danasty, and finally Hoysalas from 1022 to 1342 A.D. From the 14th century onwards, Goa became a great trading center on the west coast, especially in the vast trade of horses imported from the Middle East. This was the time for bigger empires to move in and Vijayanagar Empire conquered it in 1344. But there empire was not going to last too long and in 1347, Bahmani Sultans defeated Vijayanagara forces in 1347 and controlled Goa. Afterwards, it was a time of great prosperity and peace for Gpa, especially during the rules of Yusuf Adil Shah and Ismail Adil Shah. They created beautiful houses, fortified Goa, and encouraged local craftsmen. Their liberal and progressive rule was not going to last too long and situation changed in 1510 A.D. Goa for all purposes was not on the Portuguese Radar even after a long time of their presence in India. When the Portuguese nobleman Alfonso de Albuquerque and his cousin Francisco de Albuquerque were sent with a powerful fleet in 1503 on the orders of King Dom Manuel I, the purpose was to defend the cargoes of spices, mostly pepper, against Arab Muslim raiders. The center of spice trade was Calicut at that time and Portuguese had built forts in Cochin and Cannanore. It was in 1506-08 that an opportunistic pirate, Timoja, persuaded Albuquerque to attack Goa and acquire a better land base. This made Goa, Portugal's first real territorial acquisition in Asia. After a brief period of recapturing by the Muslims, Goa Albuquerque finally captured Goa in 1510. The inquisition of Goa in 1540 reversed the previous liberal policy of Albuquerque and imposed strict censorship of literature and new laws to forbade non-Christians from professions. Forced conversions took place continuously, censorship was established on literature, the temples were destroyed, and non-Christian priests, holy men, and teachers were evicted. This led to continuous fleeing of Hindus from Goa to other parts of India. It is not that the relationship with Portugal brought only destruction for the Goans. Portuguese also built great churches like the church of St. Cajetan and Bom Jesus basilica in Old Goa, which is a pilgrimage site for the Christians from around the world. But it is also true that pre-1961; Goa was a highly impoverished region very backward and primitive. It is after the liberation that Goa of today has emerged and it has surprised even the locals many of whom had left their homeland before its liberation. Portugal and India are today friends and Goa continues to be a fascinating blend of Latin and Oriental. Information sourced from: http://www.royalorienttrain.com/goa/goa-history.html
View all posts by goantolondon →
This entry was posted in Australia, Bars, Deakin Estate, London Capital Club, London Capital Club PR & Marketing, Private Members Clubs, Victoria and tagged #SMDinerReview, @SquareMeal, Abchurch Lane, Australia, Australian Wines, Bank, Cannon Street, Deakin Estate, Leadenhall Market, Leadenhall Street, London, London Capital Club, Monument, Murray River, Square Meal, St Paul's, Victoria. Bookmark the permalink.