We were excited to be visiting Engawa, a small, upmarket Japanese dining room found on a side street off Shaftesbury Avenue, serving Kobe beef-focused set meals from an open kitchen, and were impressed by the bright airy feel and contemporary Japanese decor when we arrived for lunch.

Engawa imports the entire cow and does much of the butchering in-house, resulting in a unique range of cuts for diners.

We settled down and ordered cocktails – the Engawa takes on Espresso Martini and Negroni. These are C’s and my favourite drinks and we use these as bench marks to gauge a place on the skills of their bartenders and to see what their versions are on these classics.

The bar at Engawa with its beautiful light piece – and the bartender creating our cocktails with flare, and you could watch him in action through the glass screens of the dining room: 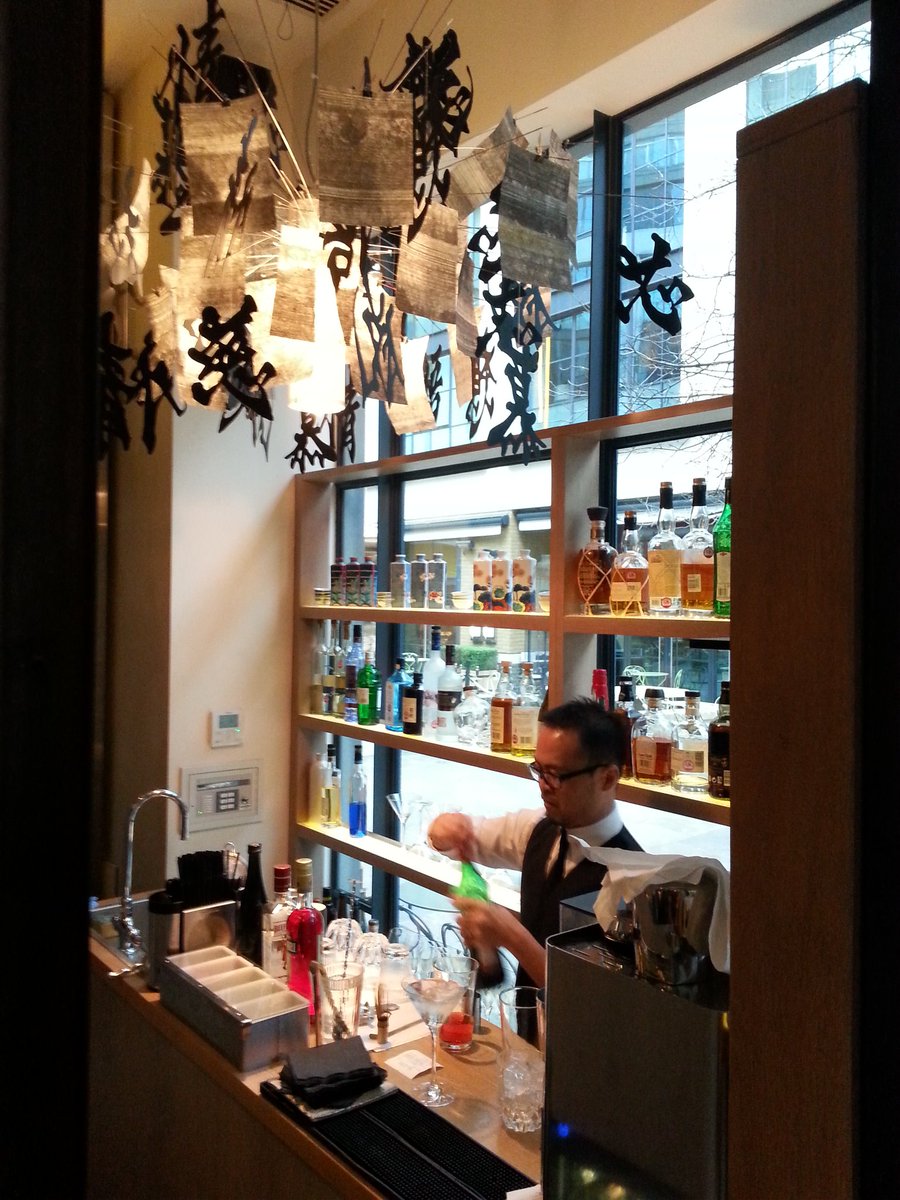 I loved my Japanese Negroni (£13) with its unique yuzu element from the subtle fresh citrus and chamomile flavours of the Tanqueray No.10 gin and notes from the bunraku junmai genshu sake. It was one of the best negronis I have had the pleasure of sampling around the world! 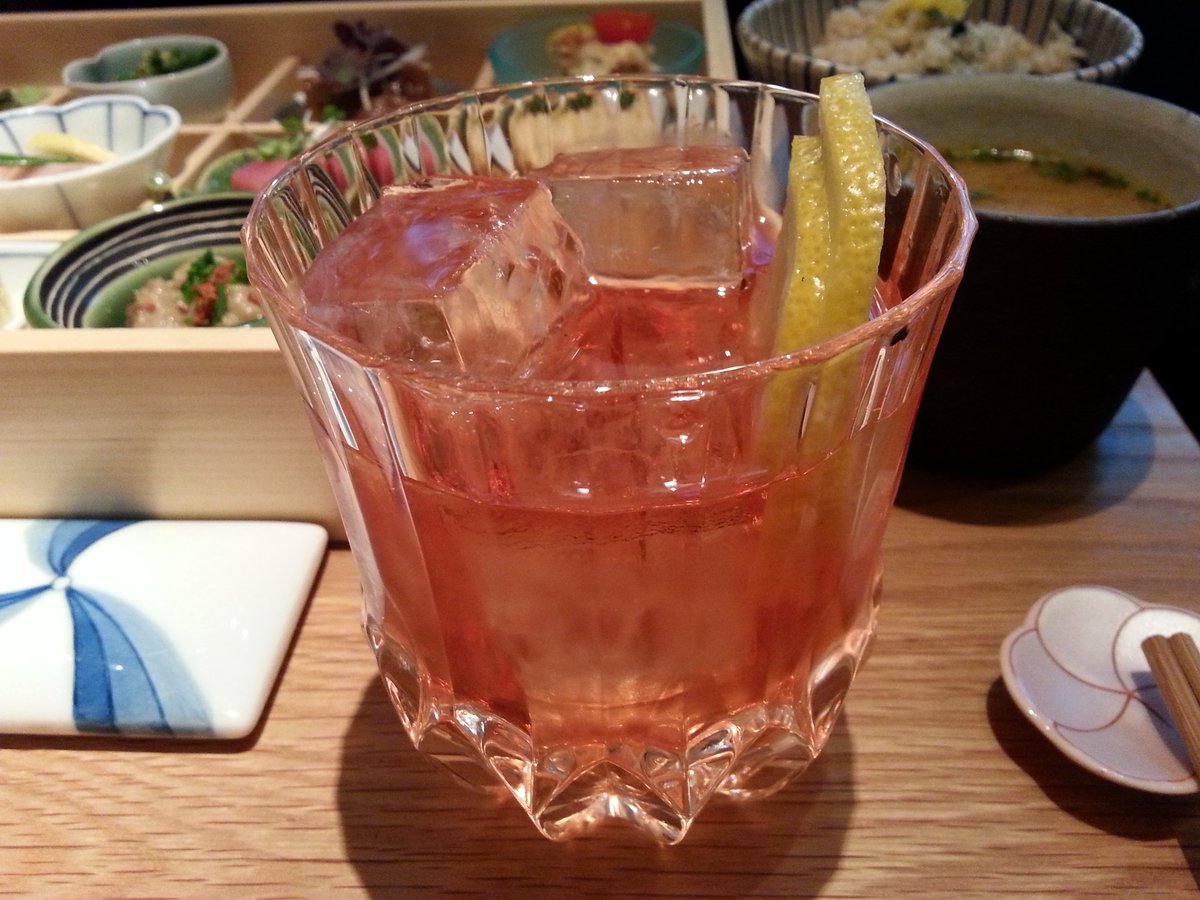 C’s Rum Nuts Espresso cocktail (£13) had a wonderful addition of hazelnuts liqueur – she was in cocktail heaven! 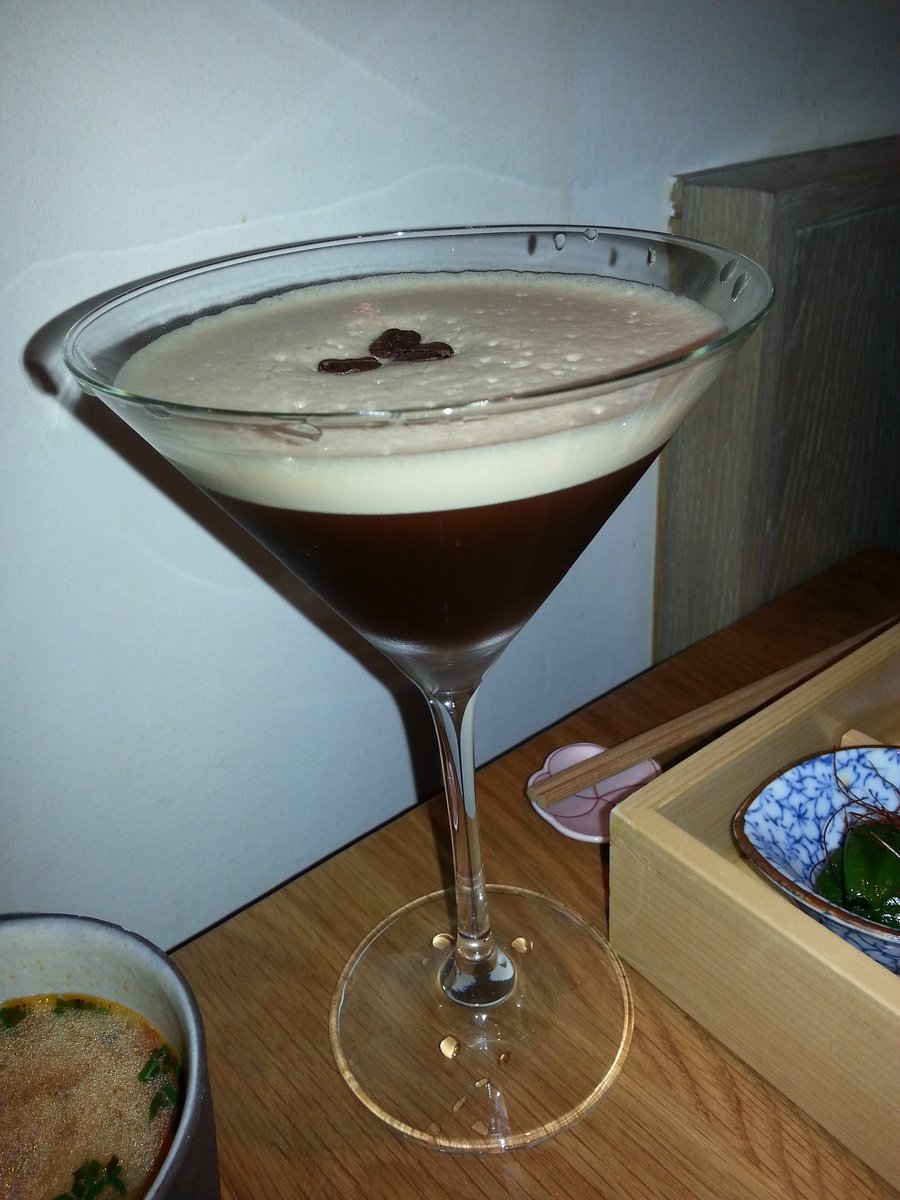 All the tables had pretty centre pieces of purple pansies displayed in little trinket boxes.

Engawa do a selection of bento boxes on their lunch menus ranging from the vegetarian bento box (£25) to the Kobe teppanyaki Hakozen bento box (£70).

Next, our 14 piece selection Hakozen bento boxes (£40) arrived with their lids closed and we loved the theatre of our waitresses removing the large wooden lids with flare, and also aligning with mathematical precision our accompaniments along the side of barley and mushroom rice and miso soup with daikon, carrot, dried tomato, chinese cabbage, onion and konnyaku (yam cake), ensuring our dining experience remained in harmony. The miso soup is useful in cleansing your palate between each item to enable you to experience the full flavours of each dish. 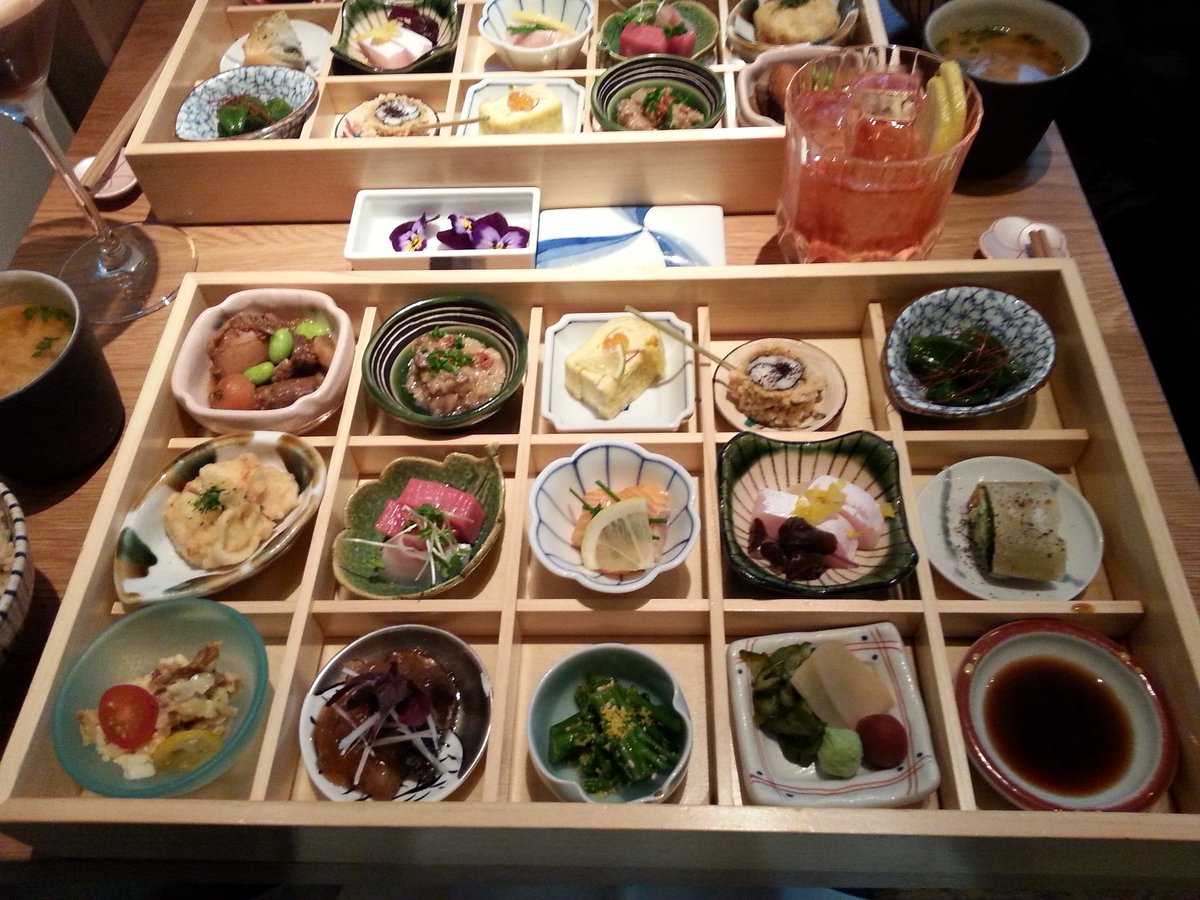 Our favourites were the fried seabass with rice cracker, tuna and seabass sashimi, and the divine Yellowtail sashimi with its light red flesh, slight fattiness but rich with deep flavours. The Kobe beef cooked in teriyaki sauce was perfectly cooked and did not overpower the delicate characteristics of the Kobe beef. However, the two Kobe beef stews were a disappointment; though they were pleasant to eat with the rice, they did not do justice to the Kobe beef. (For a detailed list of all the items in our bento box, check the end of this blog post.)

We will be keen to try next time the Kobe gyu don (£20) – Kobe beef finely sliced and cooked on the teppan with onions and a sukiyaki sauce – and the teppanyaki-cooked Kobe beef steak (Kaiseki lunch – £70).

Great selection of food showcasing the skills of the talented kitchen and bar teams, with beautifully presented items. Overall, an enjoyable experience with good service, and we recommend that you visit to enjoy some wonderful Japanese culinary creations.

Thank you to Beth from Roche Communications for organising this opportunity for us to sample Japanese delights in the centre of London!

In case you want to know what each item on the 14 piece bento box was (with another snap for ease of reference):

International food and travel blog by London based British Goan duo: Jason and Chiara Pinto. Twitter: @goantolondon @jasonpinto100 @chiarapinto About Goa: Goa is a small state on the western coast of India. Though the smallest Indian state, Goa has played an influential role in Indian history. Goa was one of the major trade centers in India, thus it had always been attracting the influential dynasties, seafarers, merchants, traders, monks and missionaries since its earliest known history. Throughout its history Goa has undergone continual transformation, leaving an indelible impression on various aspects of its cultural and socio-economic development. History of Goa: The East-West symbiosis of Goa makes it different from other parts of India, more than the historical and social niche. The history of Goa is a sweet and sour story of colonial heritage, oppressive rulers, a glorious culture, and uneventful immediate past. As a land with the identity of its own, Goa was brought into focus when it was liberated of Portugal from its oppressive rule of around 450 hundred years in 1961. Goa was captured and annexed to the Portuguese in 1510 following the urges of trade and demand of spices and also cottons and indigo. But, Goa has a history that starts much before Portugal even thought of Goa being where it is. Goa was coveted and ruled by a great number of Indian kingdoms and dynasties from the 4th century onwards. The first kingdom to rule Goa and Konkan were Bhojas, who were the feudatories of Ashoka in 4th and 5th centuries AD. The city of Chandrapur (present Chandor) was founded by Prince Chandraditya, son of Chalukya King Pulakesin from 566 to 597 A.D. after this, Goa was ruled consecutively by Silahara Dynasty, Kadamba Danasty, and finally Hoysalas from 1022 to 1342 A.D. From the 14th century onwards, Goa became a great trading center on the west coast, especially in the vast trade of horses imported from the Middle East. This was the time for bigger empires to move in and Vijayanagar Empire conquered it in 1344. But there empire was not going to last too long and in 1347, Bahmani Sultans defeated Vijayanagara forces in 1347 and controlled Goa. Afterwards, it was a time of great prosperity and peace for Gpa, especially during the rules of Yusuf Adil Shah and Ismail Adil Shah. They created beautiful houses, fortified Goa, and encouraged local craftsmen. Their liberal and progressive rule was not going to last too long and situation changed in 1510 A.D. Goa for all purposes was not on the Portuguese Radar even after a long time of their presence in India. When the Portuguese nobleman Alfonso de Albuquerque and his cousin Francisco de Albuquerque were sent with a powerful fleet in 1503 on the orders of King Dom Manuel I, the purpose was to defend the cargoes of spices, mostly pepper, against Arab Muslim raiders. The center of spice trade was Calicut at that time and Portuguese had built forts in Cochin and Cannanore. It was in 1506-08 that an opportunistic pirate, Timoja, persuaded Albuquerque to attack Goa and acquire a better land base. This made Goa, Portugal's first real territorial acquisition in Asia. After a brief period of recapturing by the Muslims, Goa Albuquerque finally captured Goa in 1510. The inquisition of Goa in 1540 reversed the previous liberal policy of Albuquerque and imposed strict censorship of literature and new laws to forbade non-Christians from professions. Forced conversions took place continuously, censorship was established on literature, the temples were destroyed, and non-Christian priests, holy men, and teachers were evicted. This led to continuous fleeing of Hindus from Goa to other parts of India. It is not that the relationship with Portugal brought only destruction for the Goans. Portuguese also built great churches like the church of St. Cajetan and Bom Jesus basilica in Old Goa, which is a pilgrimage site for the Christians from around the world. But it is also true that pre-1961; Goa was a highly impoverished region very backward and primitive. It is after the liberation that Goa of today has emerged and it has surprised even the locals many of whom had left their homeland before its liberation. Portugal and India are today friends and Goa continues to be a fascinating blend of Latin and Oriental. Information sourced from: http://www.royalorienttrain.com/goa/goa-history.html
View all posts by goantolondon →
This entry was posted in Beef, cocktails, Coffee, Engawa, England, Food Safari ideas, Global inspirations, Ham Yard, Japanese, Japanese, London, menus and prices, Oxford Street, Piccadilly Circus, present ideas, Roche Communications, seafood, Shaftesbury Avenue, Style of cooking, Sushi, Travel Guides, use of modern ingredients, Valentine's Day ideas, Venues for special occasions and tagged #bento, #Beth, #JapaneseFood, #MyFab5, #SMDinerReview, @EngawaLondon, @RocheCom, @SquareMeal, box, bunraku junmai genshu sake, campari, cocktails, Engawa, espresso, Espresso Martini, gin, Ham Yard, hazelnuts liqueur, Japanese, Japanese Negroni, kahlua, London, lunch, martini rosso, Negroni, nuts, Oxford Street, Piccadilly Circus, Regent Street, rum, Rum Nuts Espresso, Saturday, Shaftesbury Avenue, Square Meal. Bookmark the permalink.