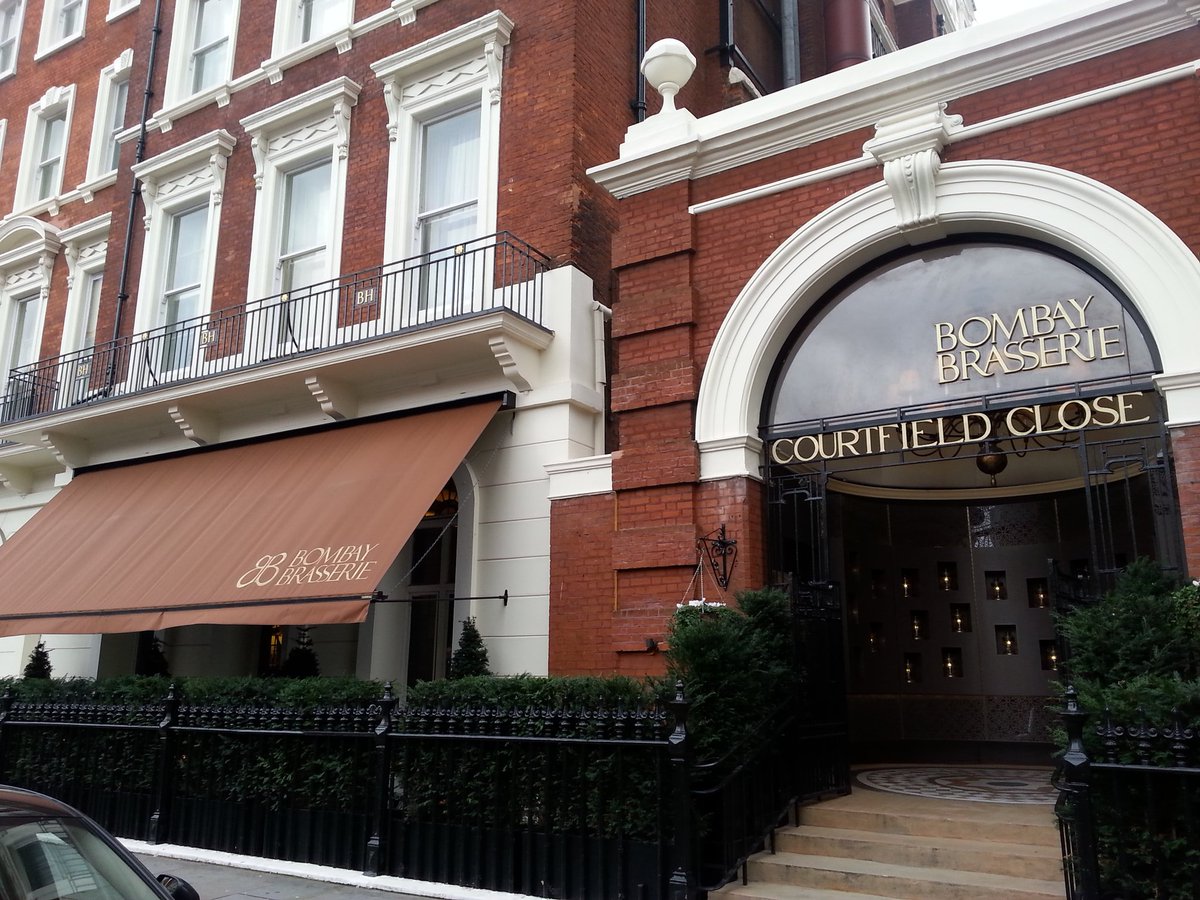 We were invited to review weekend brunch at Bombay Brasserie, the little sister to Michelin starred Quilon in SW1 – and were excited to be visiting a Taj Hotels Group business in London, as we have enjoyed staying at and dining at their properties when we are visiting relatives in Goa.

When you enter you walk into an impressive, sleek bar area with a warm glowing fire and pictures adorning the walls with Maharajahs and Maharinis as well as other notable people. 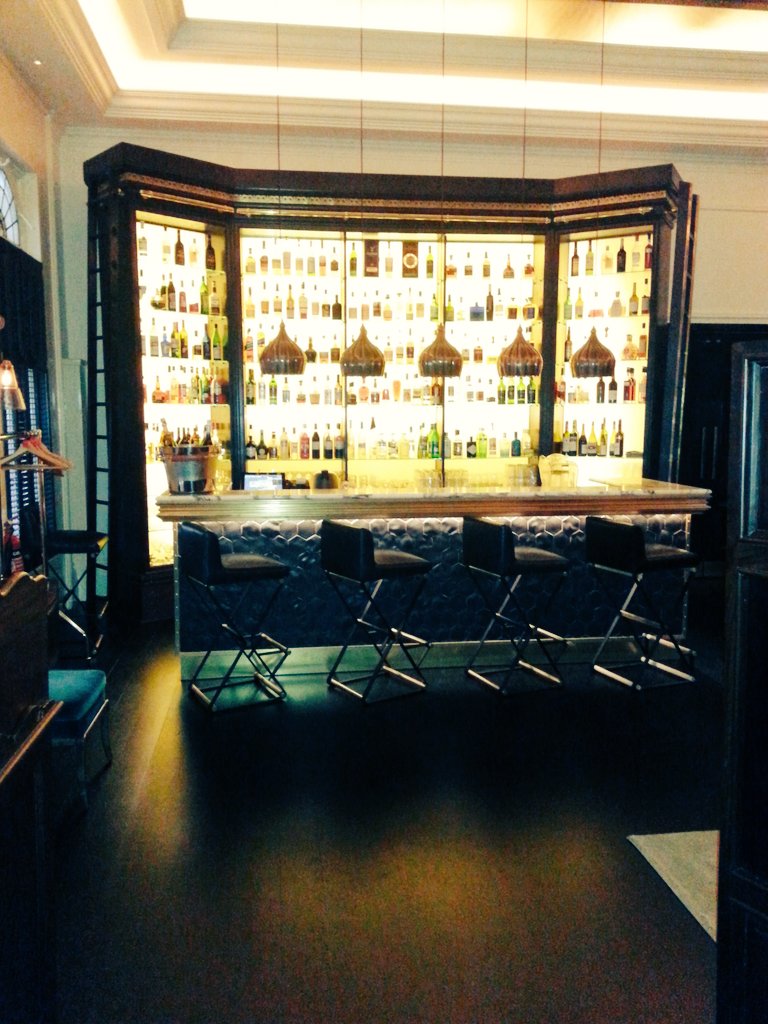 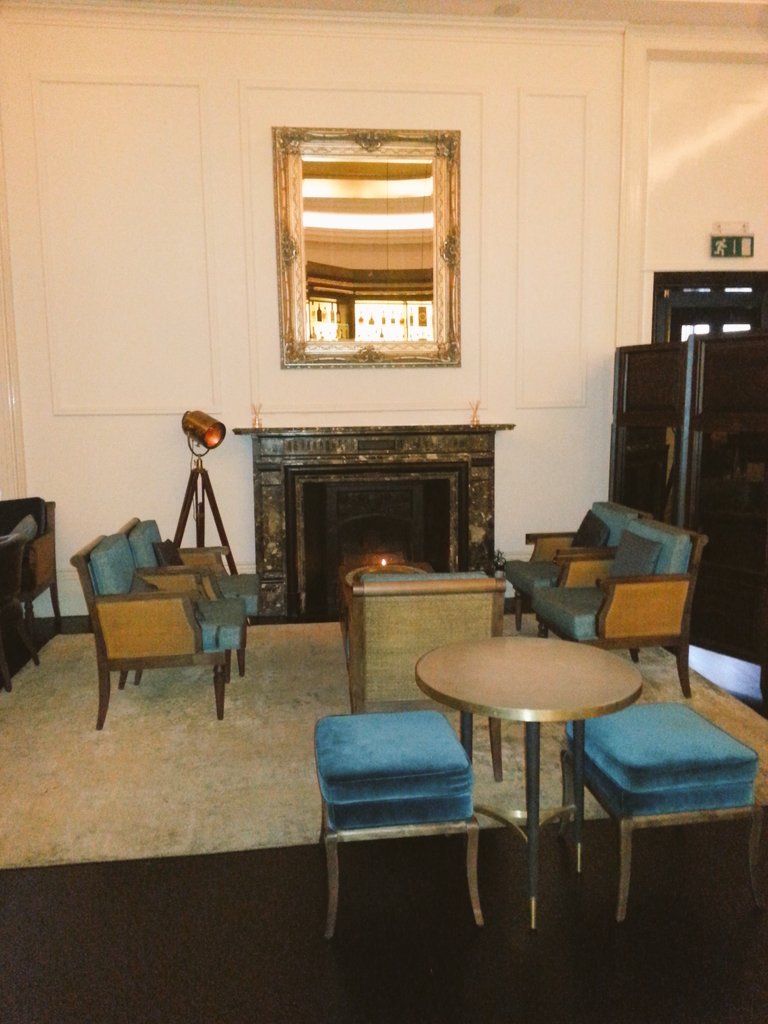 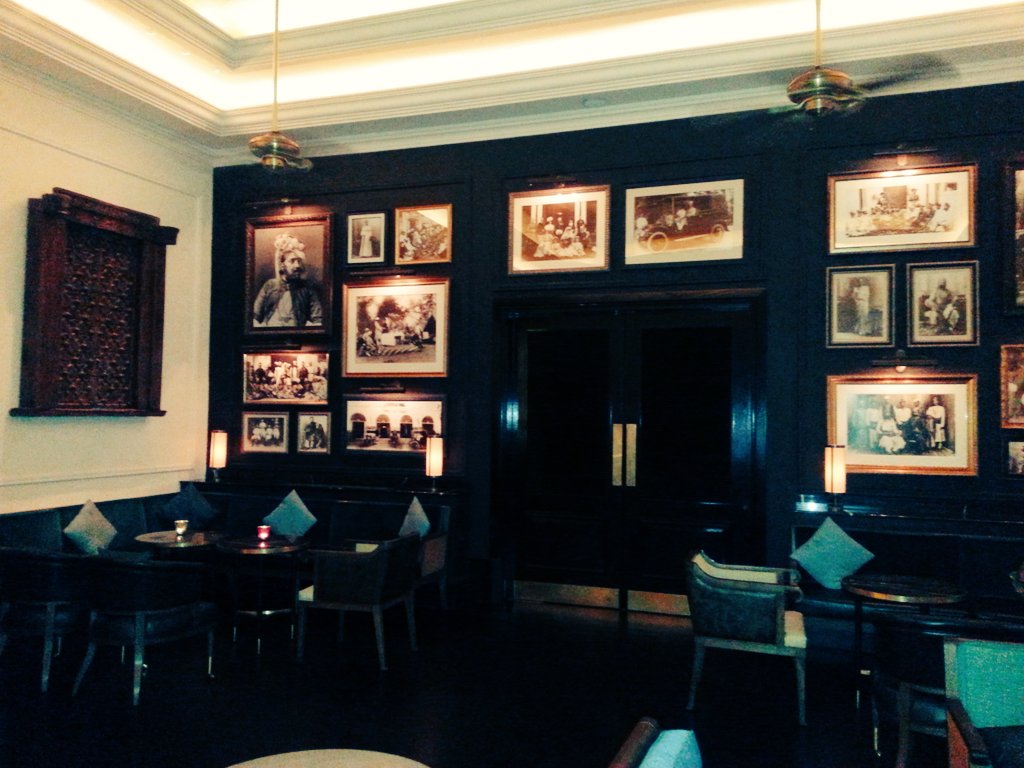 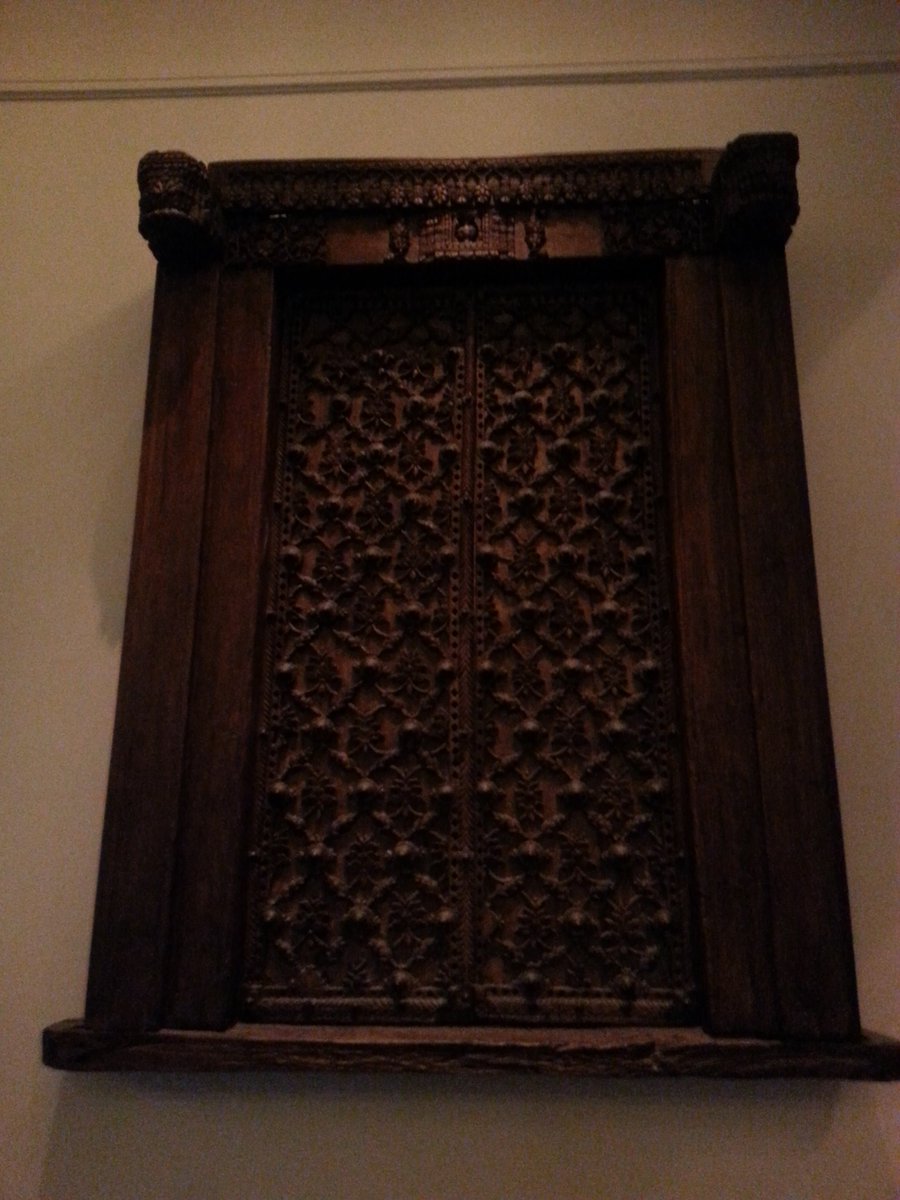 As you walk through the saloon doors, you are greeted by an breathtakingly beautiful chandelier and main dining room with its own resident pianist – who was amazing to listen to! 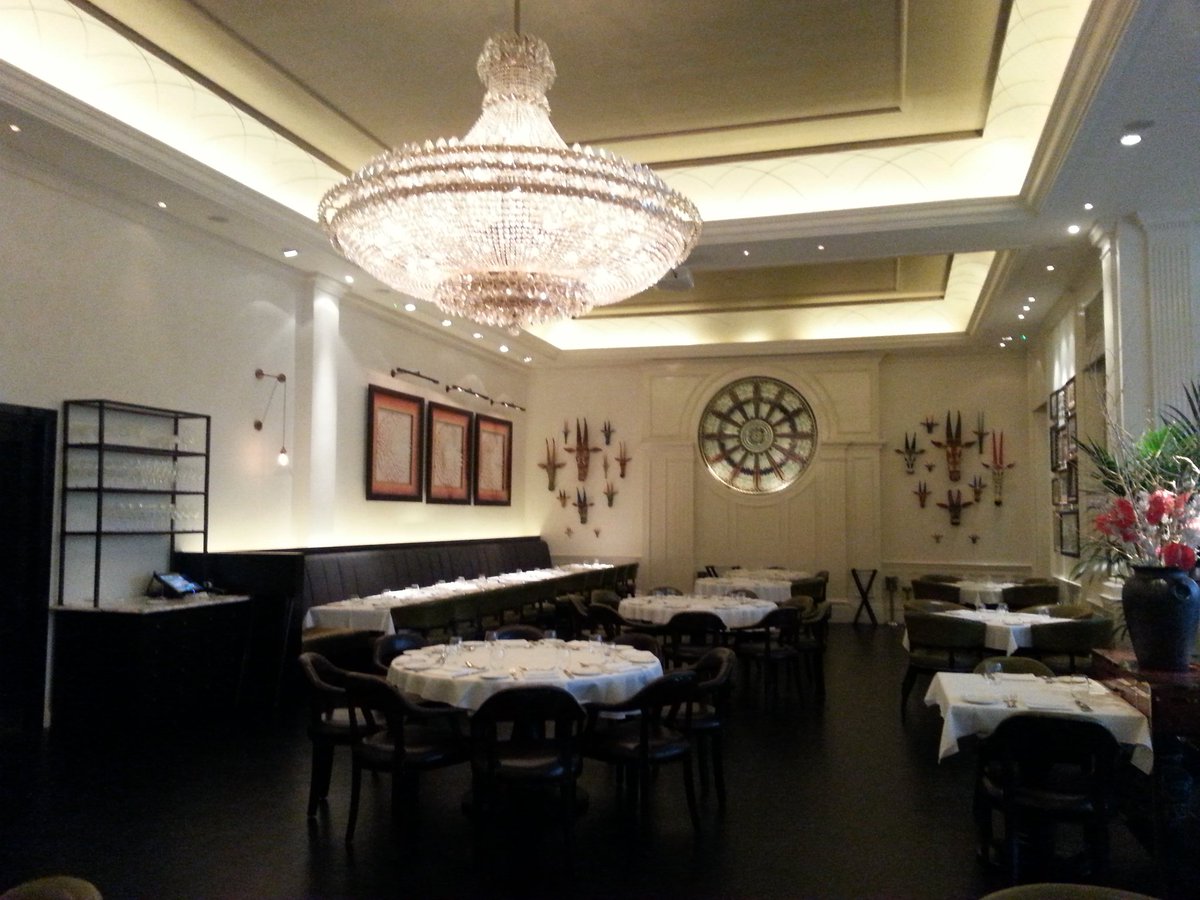 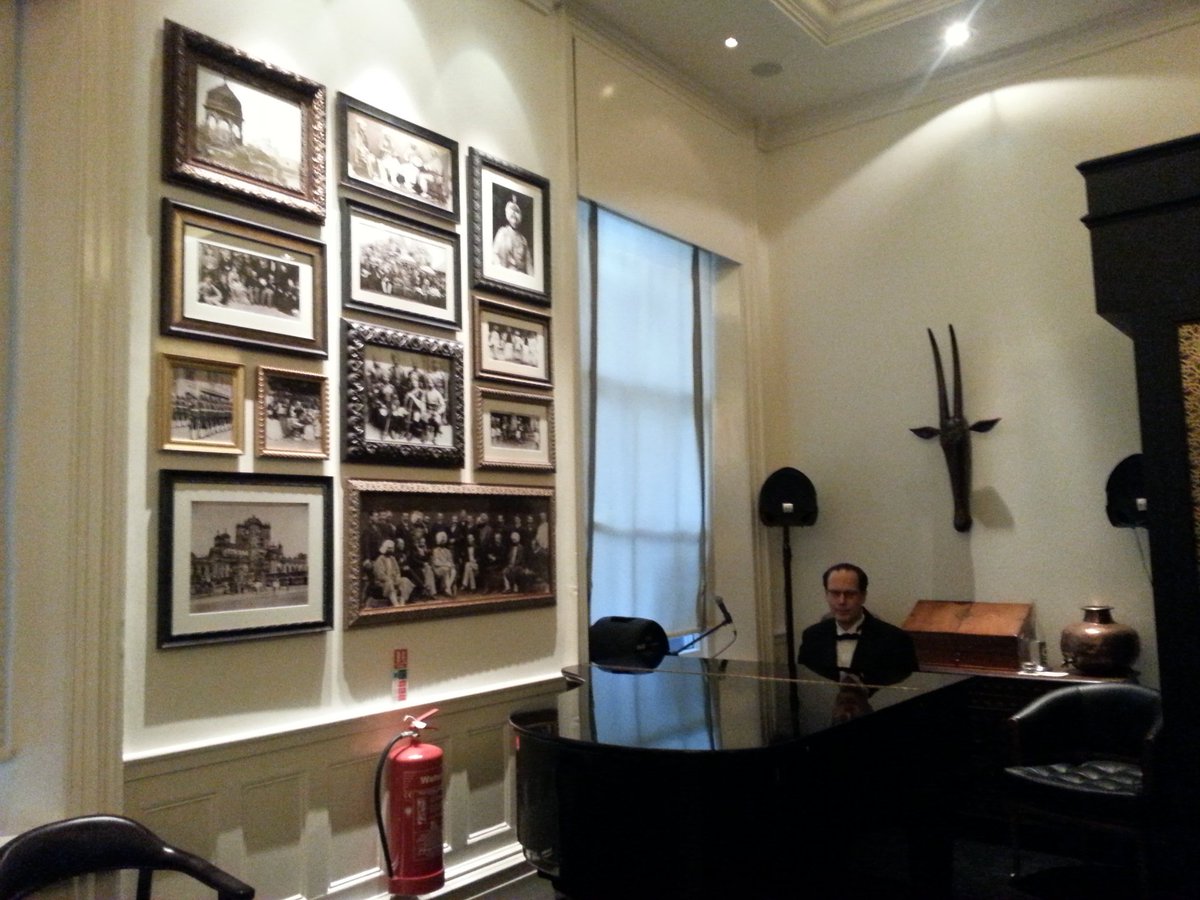 We then were guided into their conservatory for brunch. Loved the relaxed, bright airy feel and decor in the conservatory! 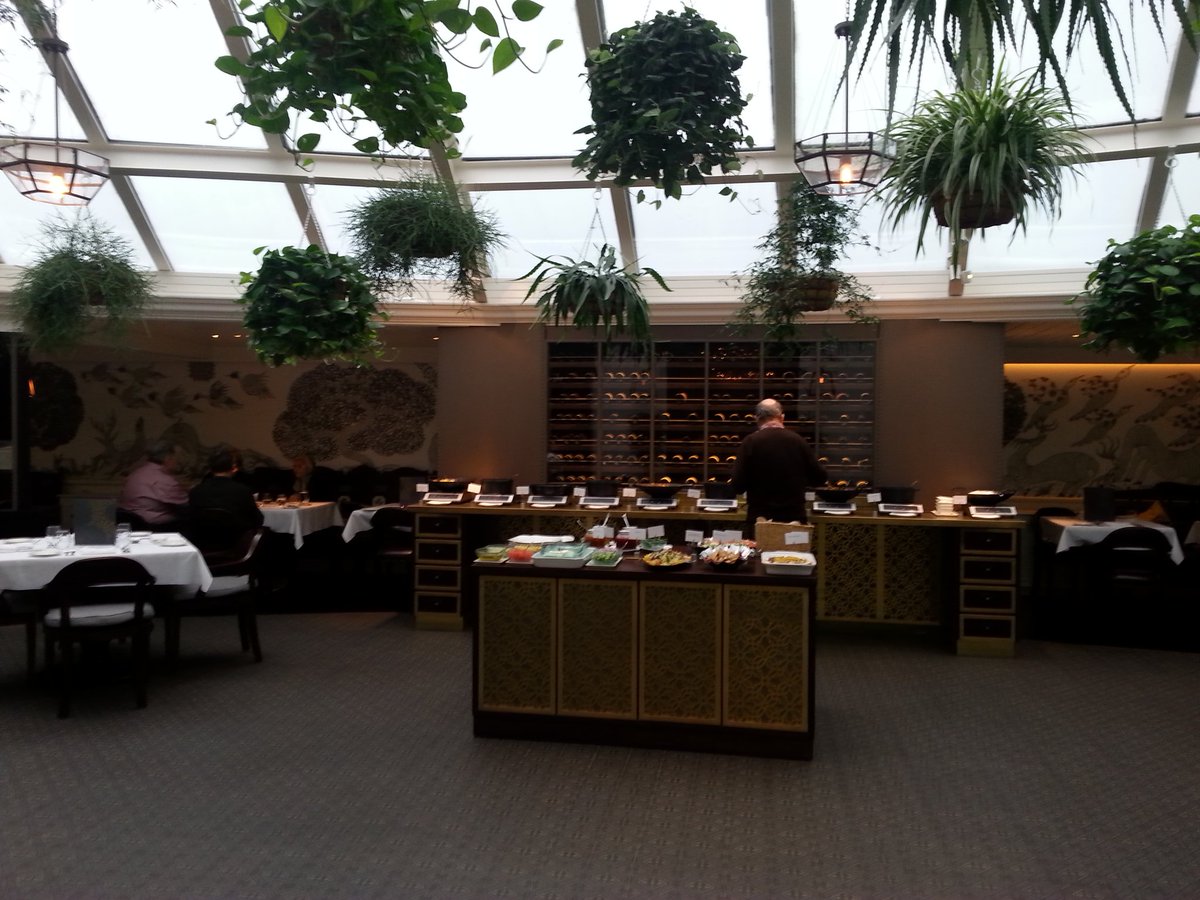 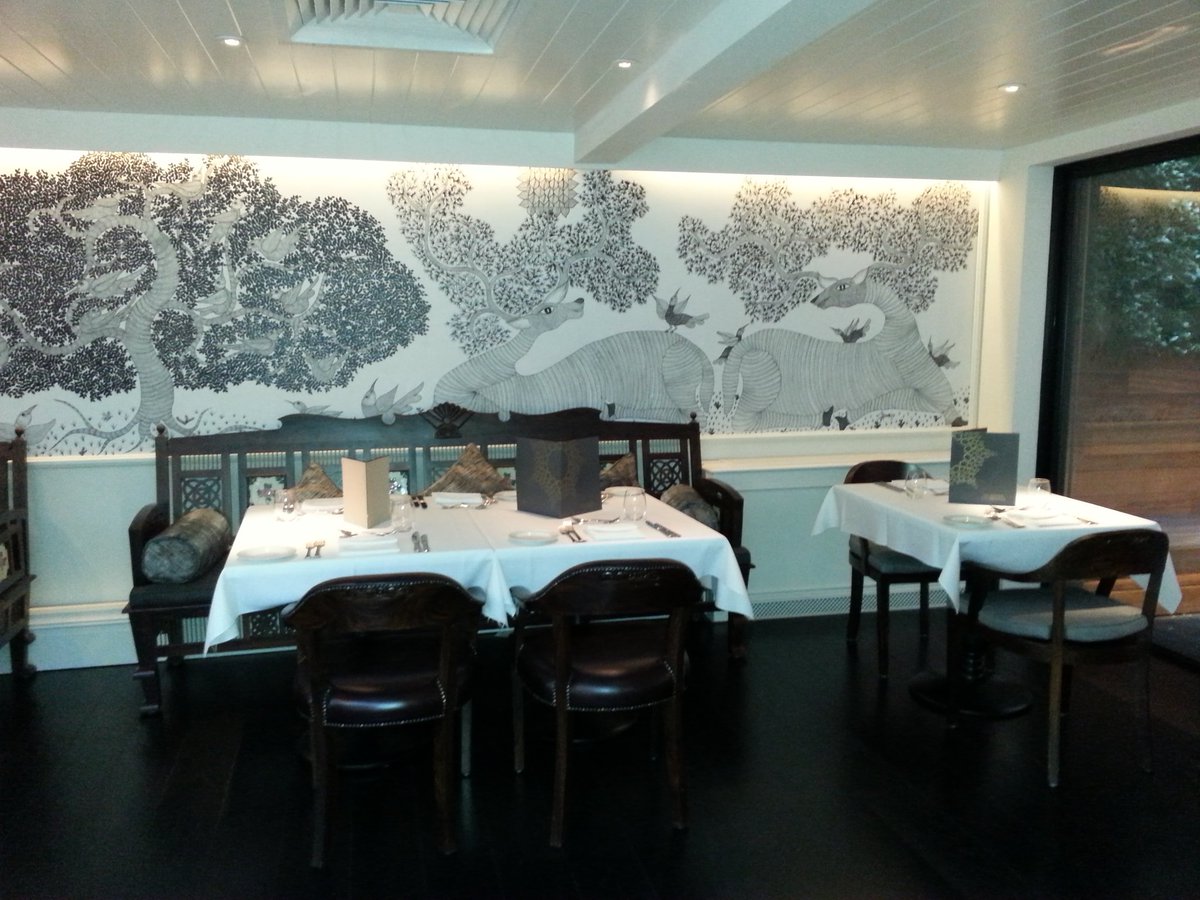 I think you will agree that their venue looks amazing post-refurb!

We kicked off proceedings with a visit to the chaat stand – Bombay Brasserie’s take on the street food stalls in India serving quick bite-sized snacks.

We were served an array of chaat stand delights by chef Elvis created with care and precision, as they are delicate little morsels  – including a bhel puri and pani puri sections: 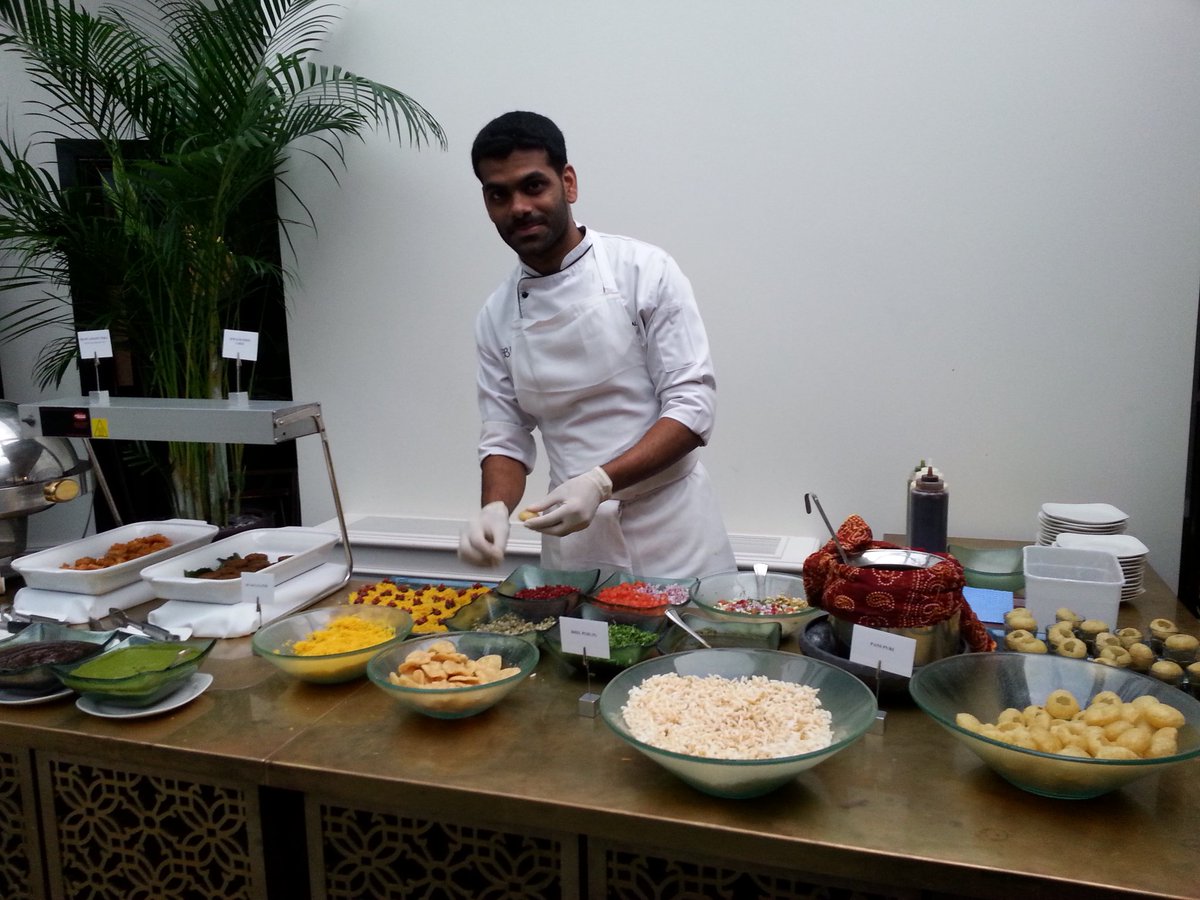 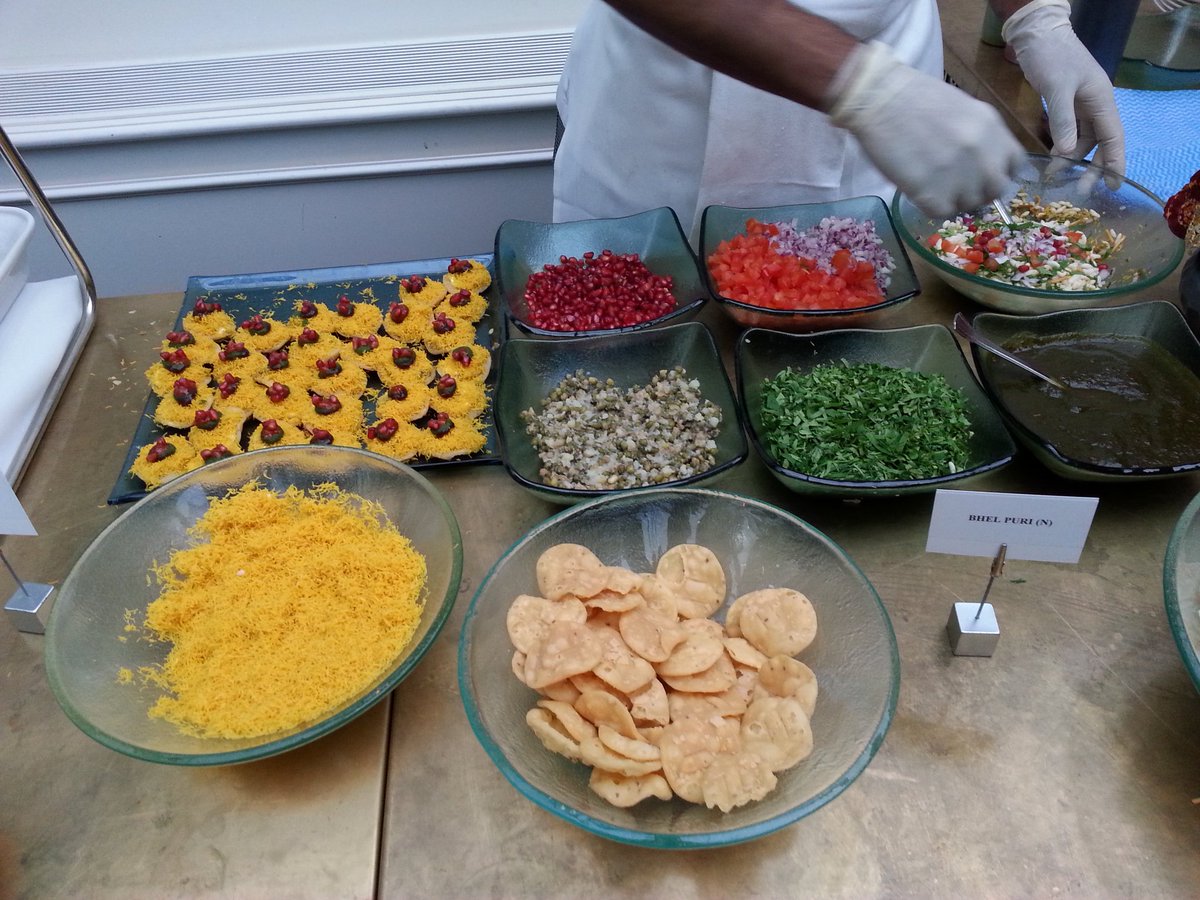 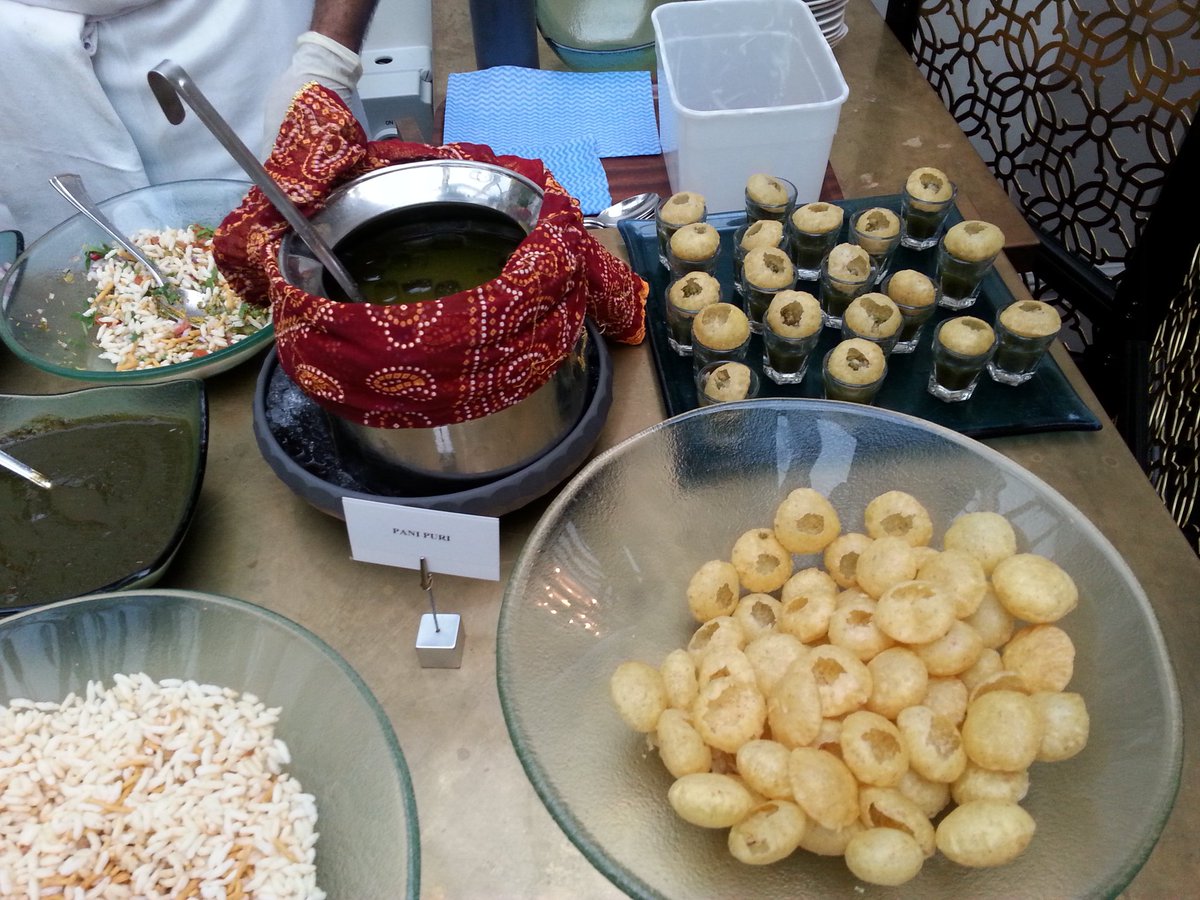 Here is C’s carefully selected plate of bhel puri and coconut prawns creatively decorated with tamarind sauce – she wanted to ensure she left space to try the main dishes: 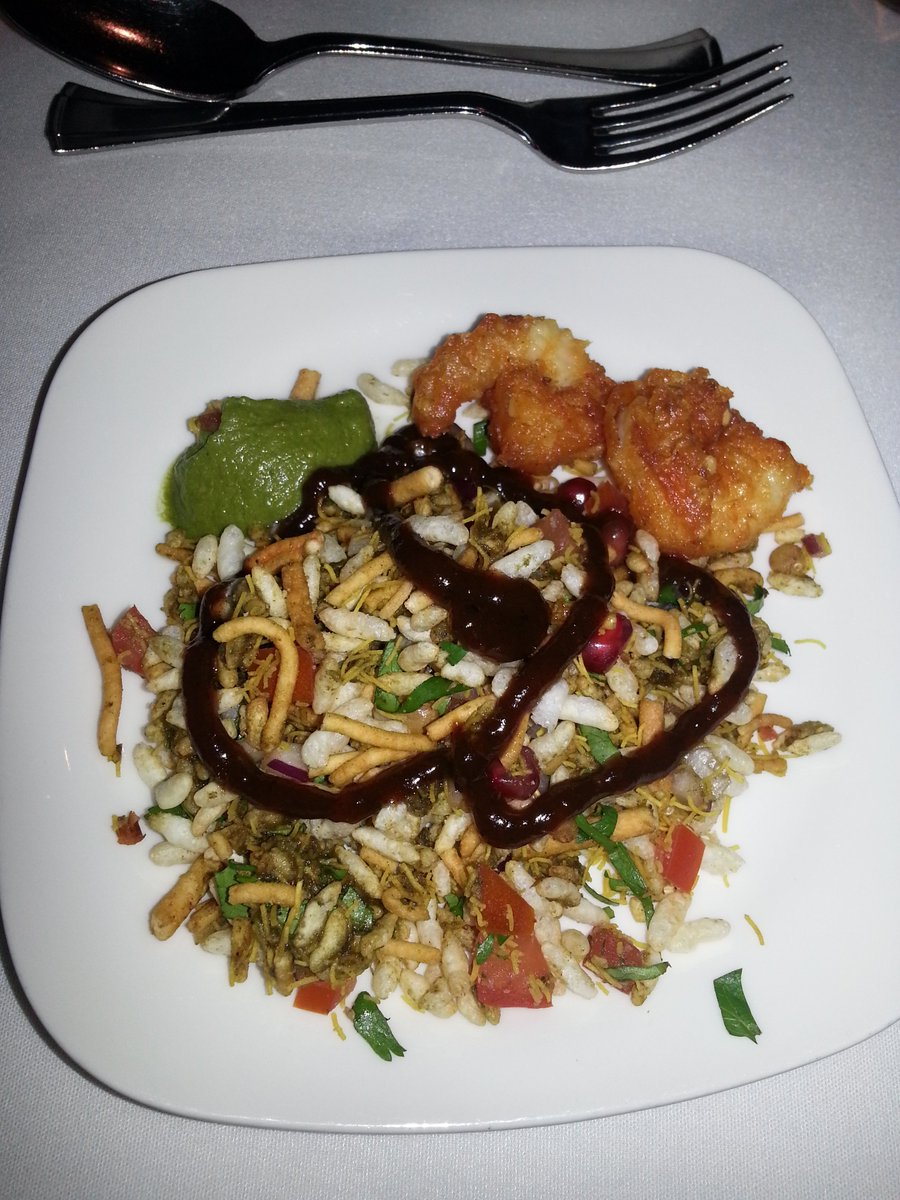 Though, Oster and Elvis insisted on me trying all the items on the chaat stand, so I had the full selection of: bhel puri, coconut prawns, pani puri with vegetable pakora and a tandoor cooked chicken in a dill marinade – a very colourful, and tasty, start to my brunch experience: 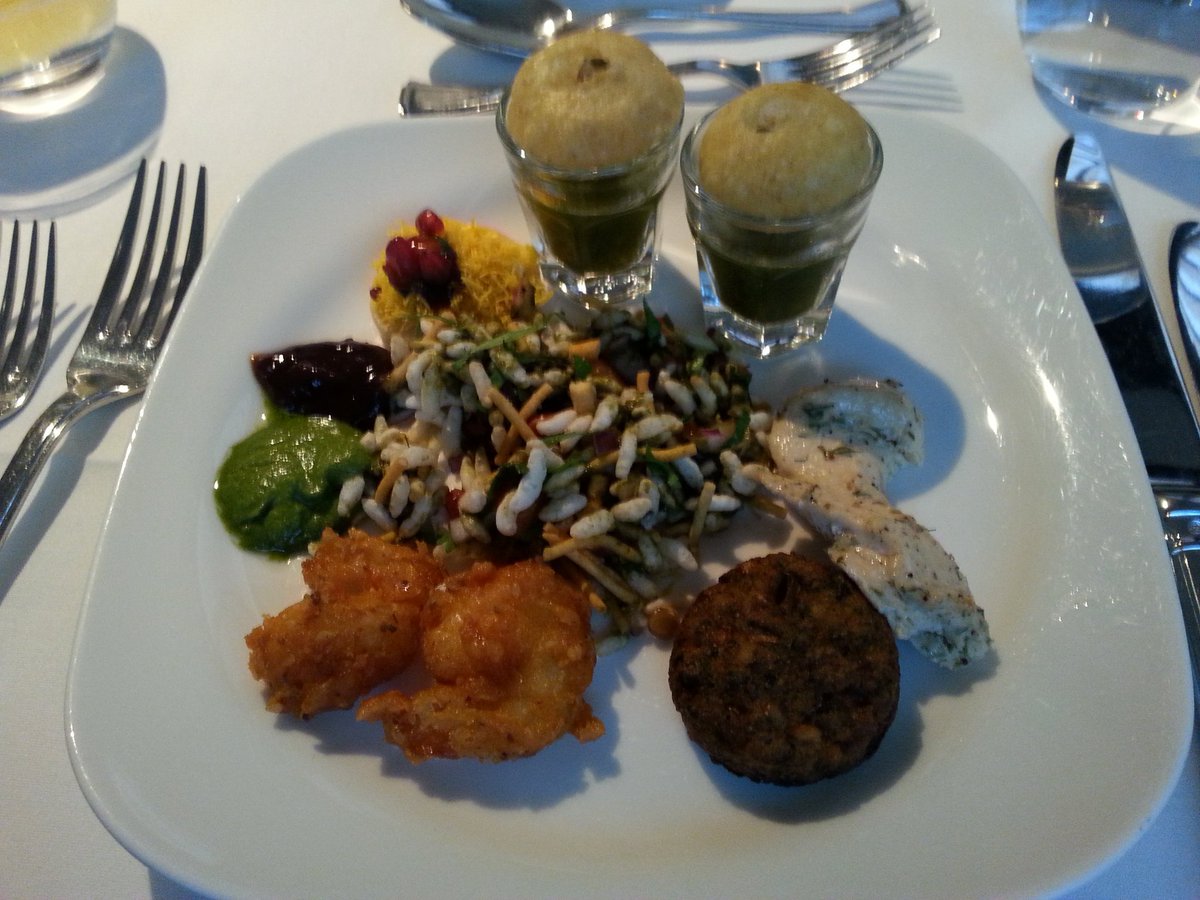 Bhelpuri is made out of puffed rice, vegetables and a tangy tamarind sauce. Panipuri, also called golgappa, is a street snack in several regions of India. It consists of a round, hollow puri, fried crisp and filled with a mixture of flavored water, tamarind chutney, chilli, chaat masala, potato, onion and chickpeas.

Chef Prahlad Hedge came over and chatted to us a few times during our meal, and we learnt that he had trained under Chef Cyrus Todiwala, which he spoke fondly of, and then continued his career moving around Taj Hotel locations, including the hotels in Goa near to our relatives. He was very passionate about sharing his experiences gained from his culinary career as well as the influences of his travels on new menu creations both on the a la carte menu and for the brunch menu.

Next we moved onto mains – too many choices! 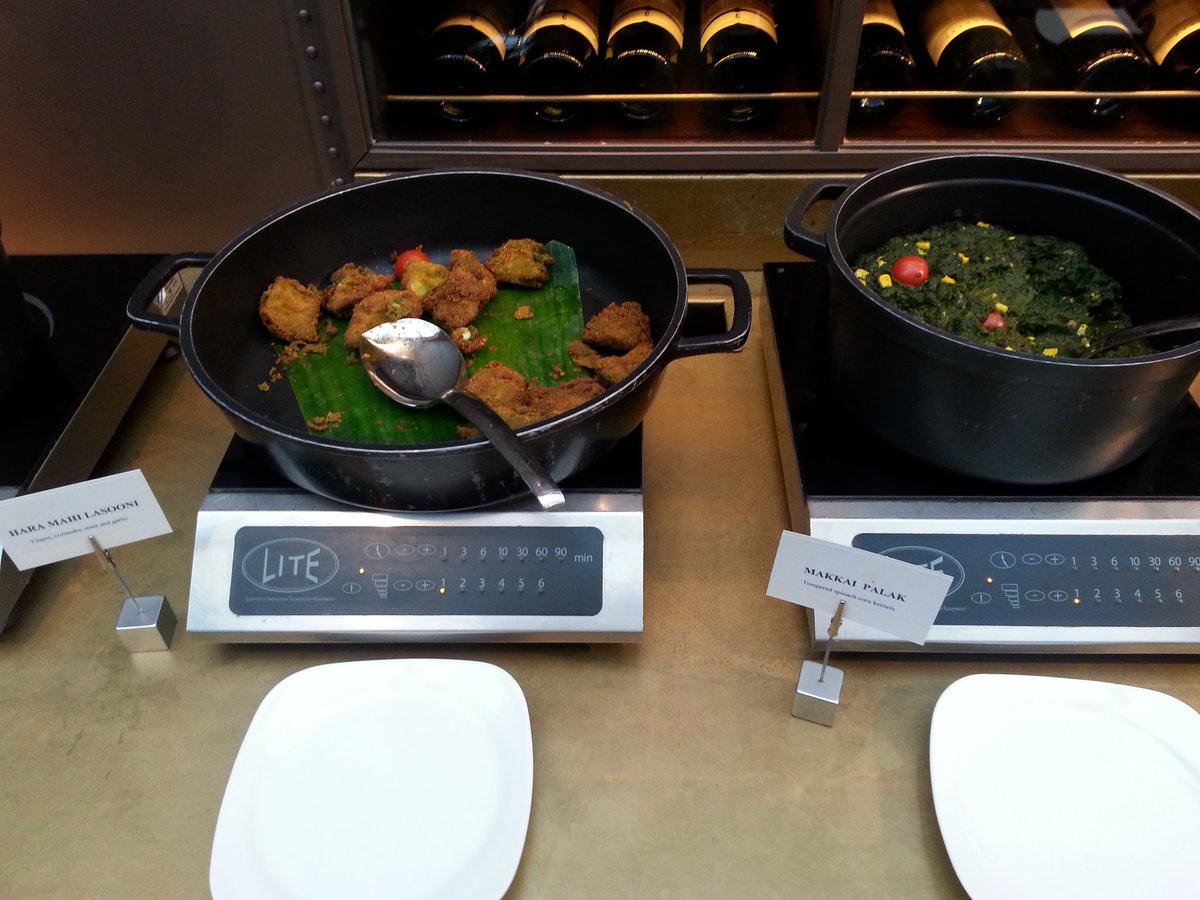 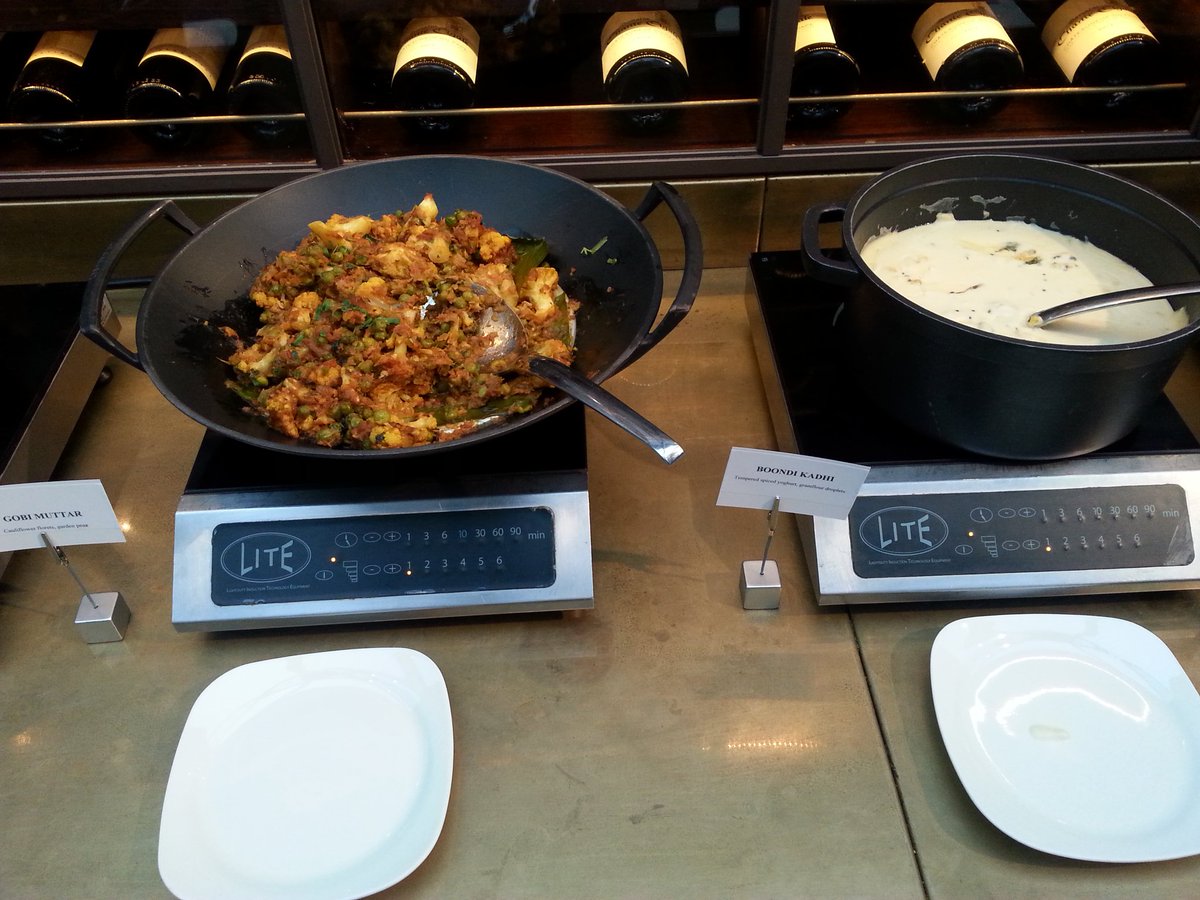 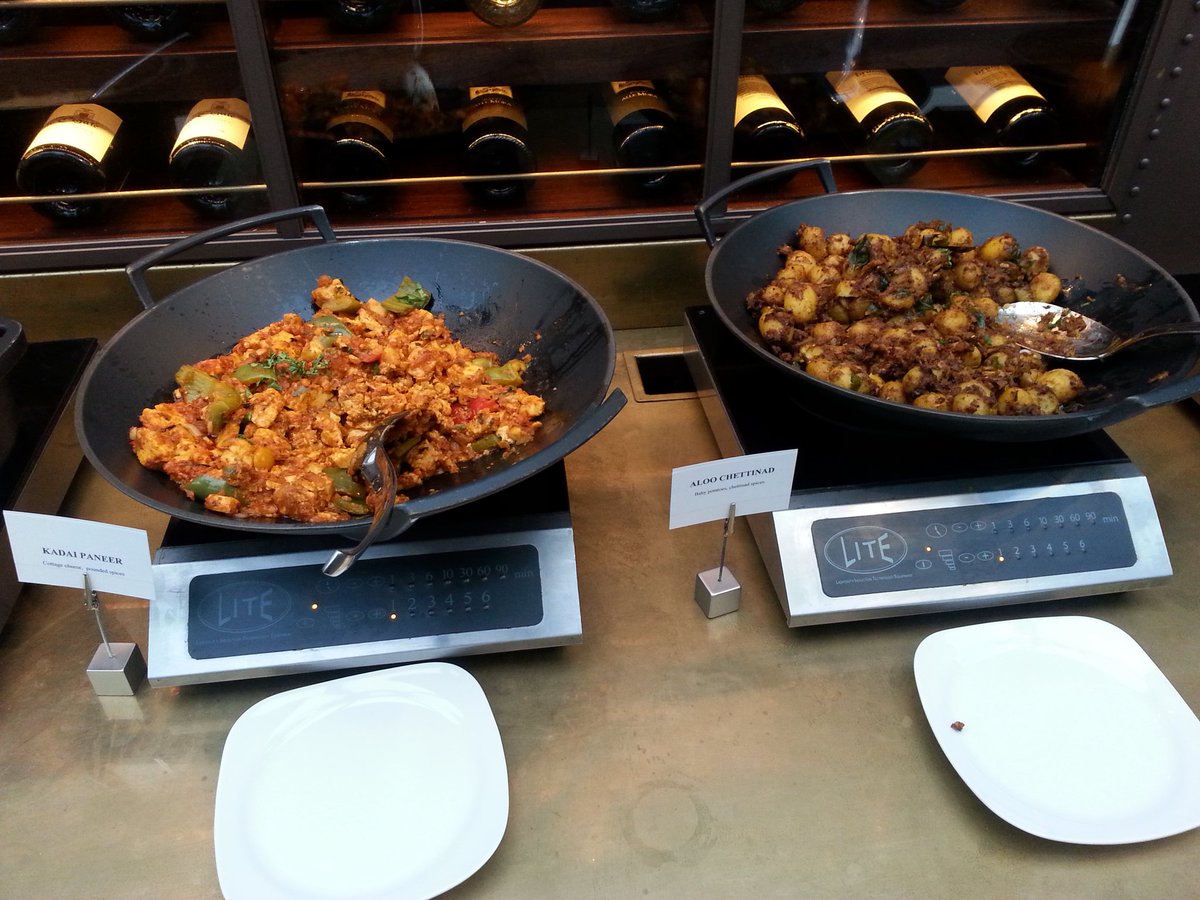 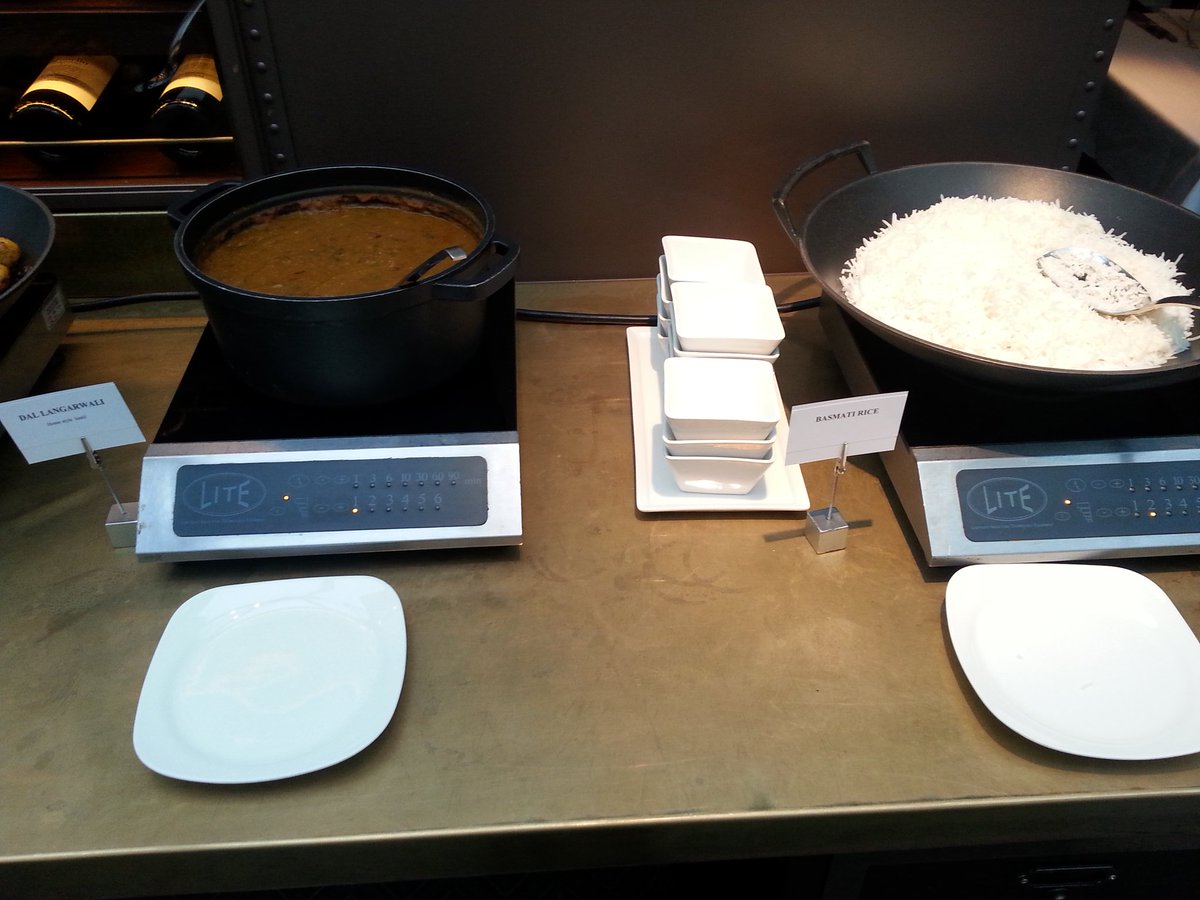 The raita station w/ pickles – to help quell any overload of chillies! : 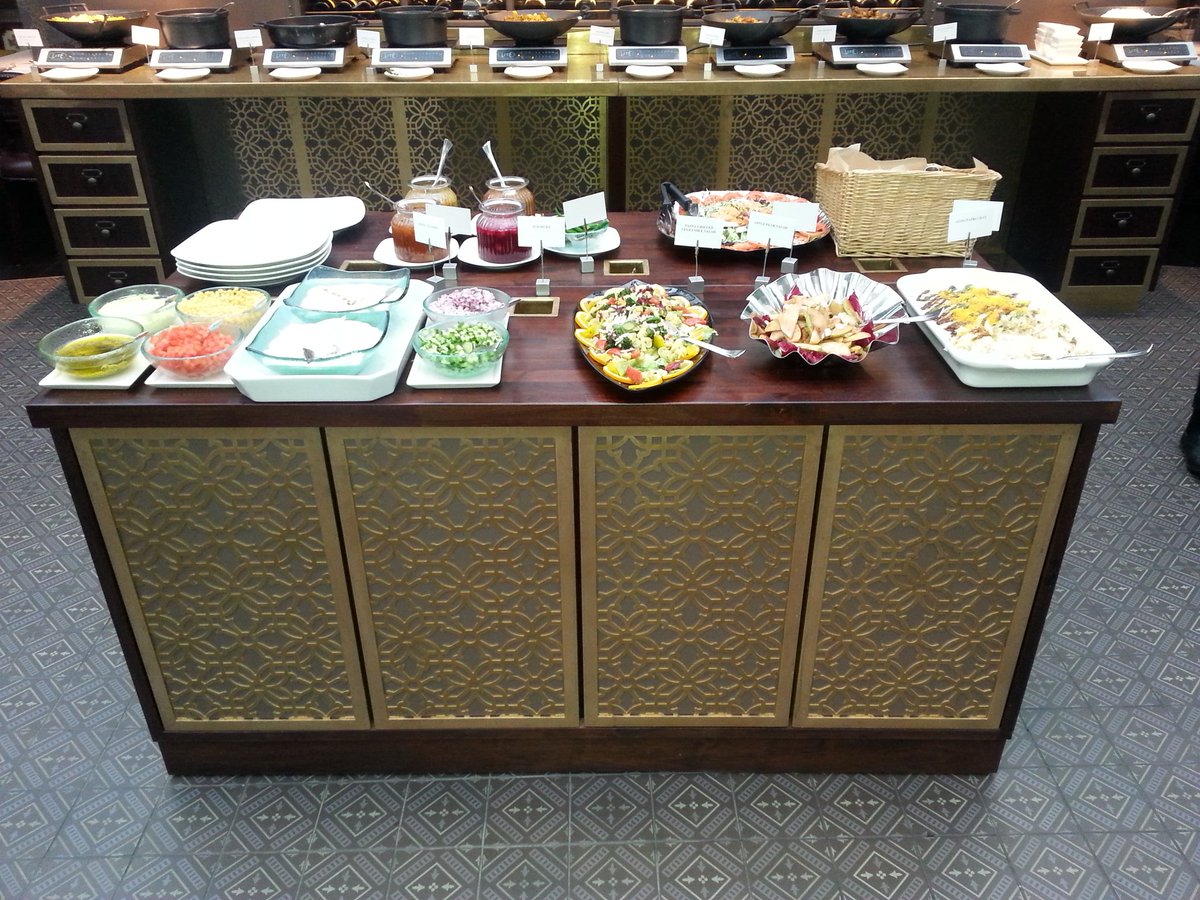 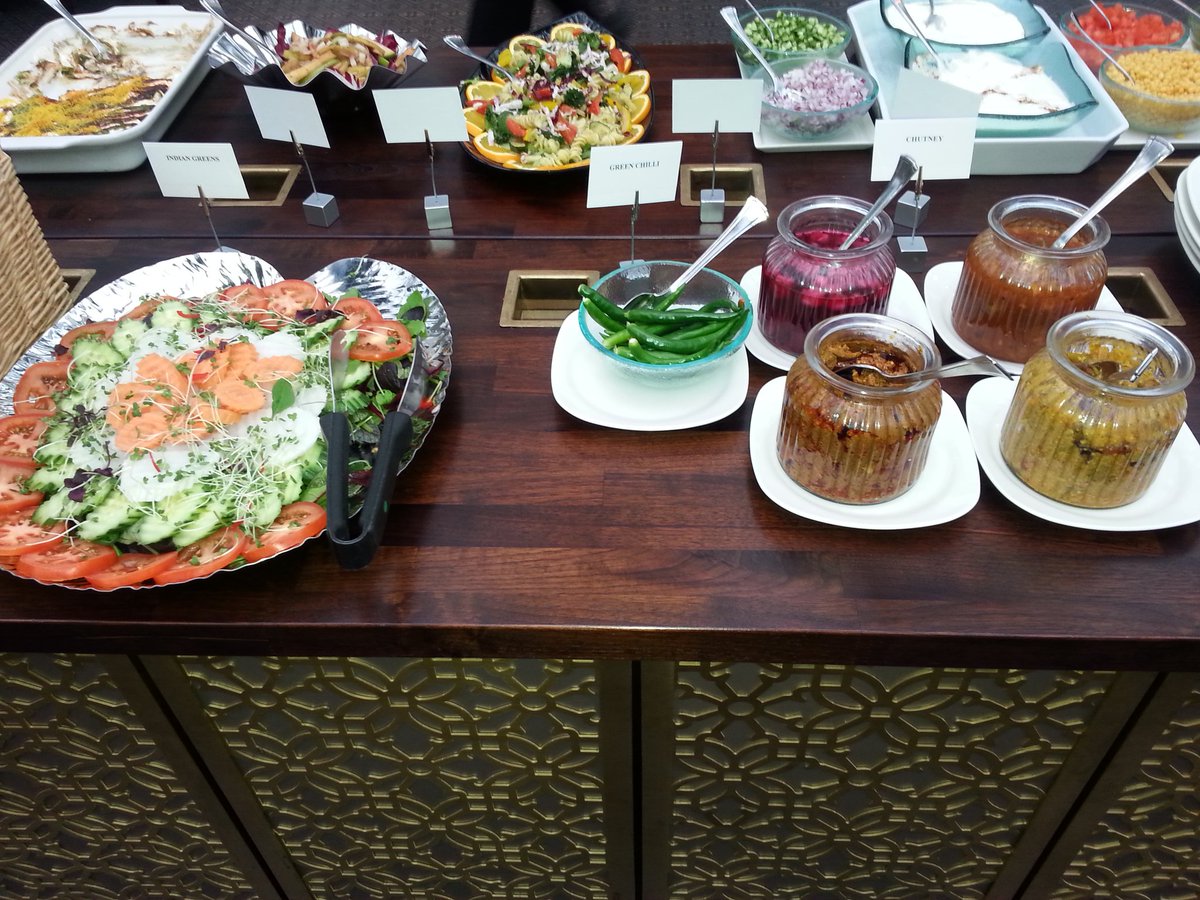 Here is a selection of some of the main dish items on offer: lamb with turnips, spice crusted tilapia, gunpowder potatoes, spinach with sweetcorn, and paneer : 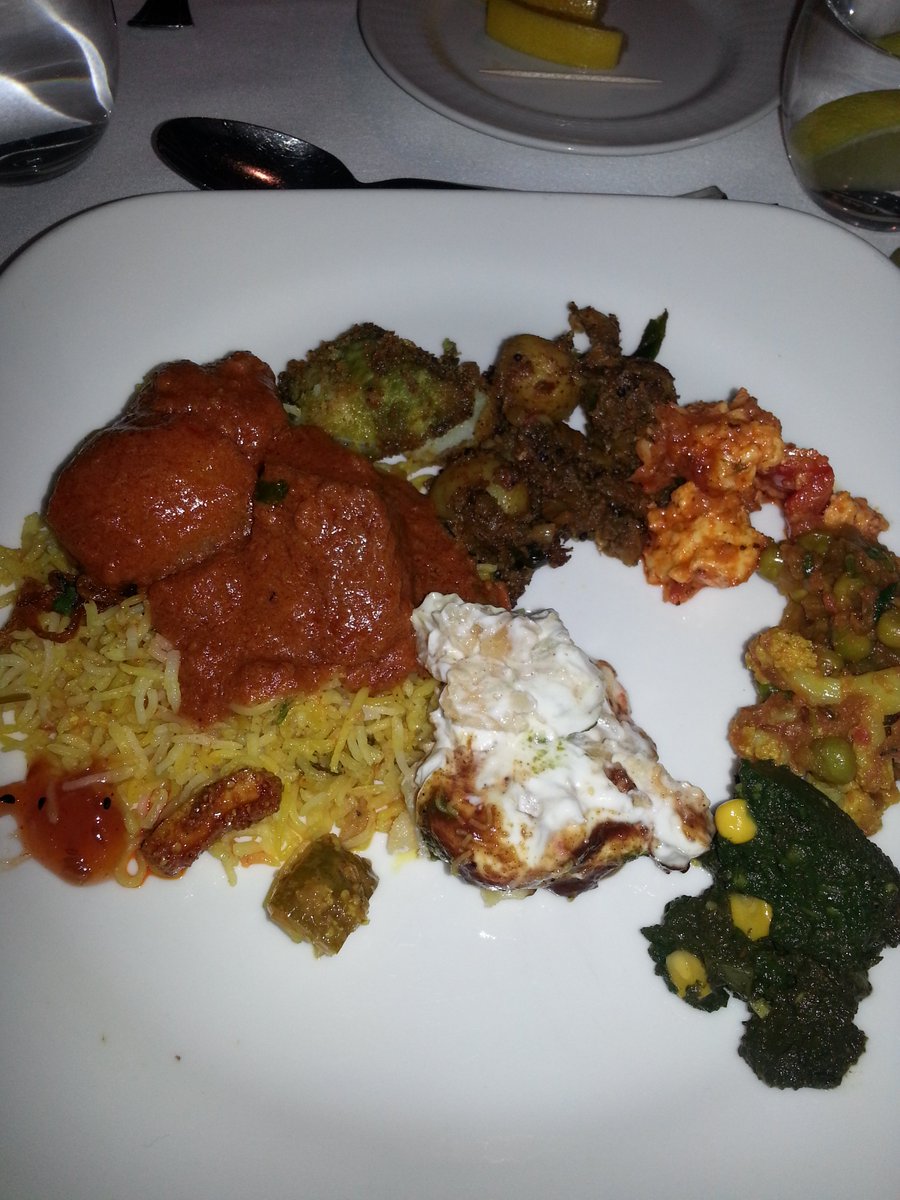 not forgetting the all important … side of hot buttery naan : 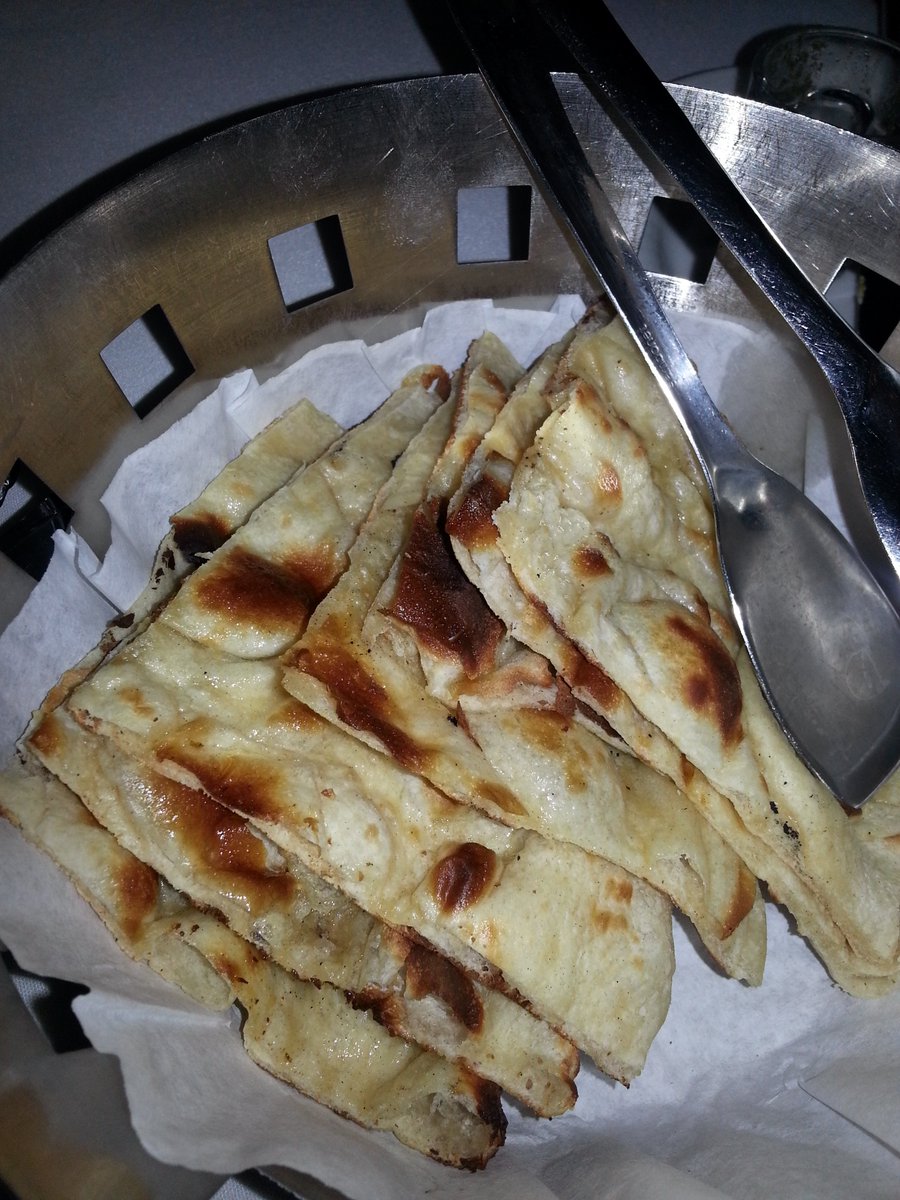 We especially loved the coriander and cumin crust on the talapia, comfort of the soft, pillowy paneer and the spicy hit from the gunpowder potatoes.

Now, as we have a sweet tooth, we had actually checked out the dessert selection even before visiting the chaat stand; can you fault us?! 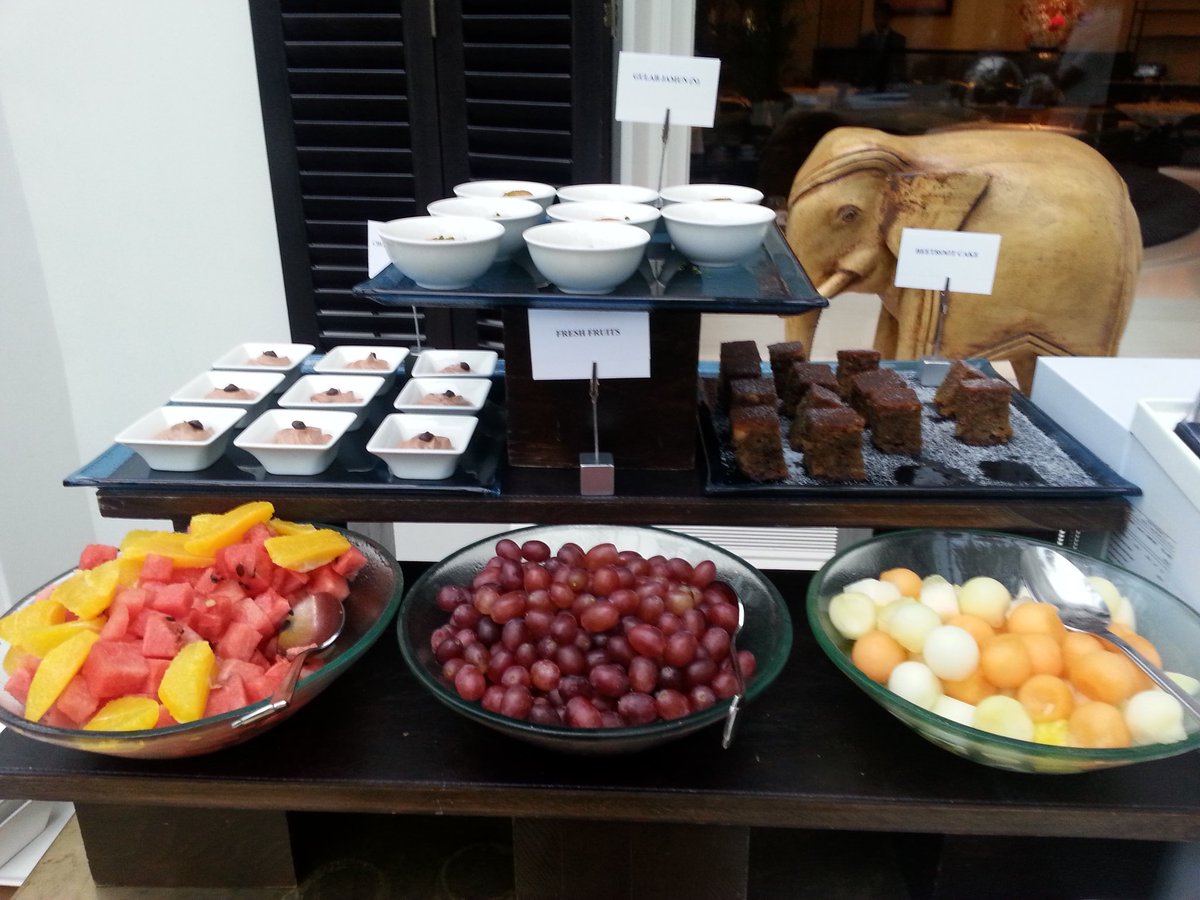 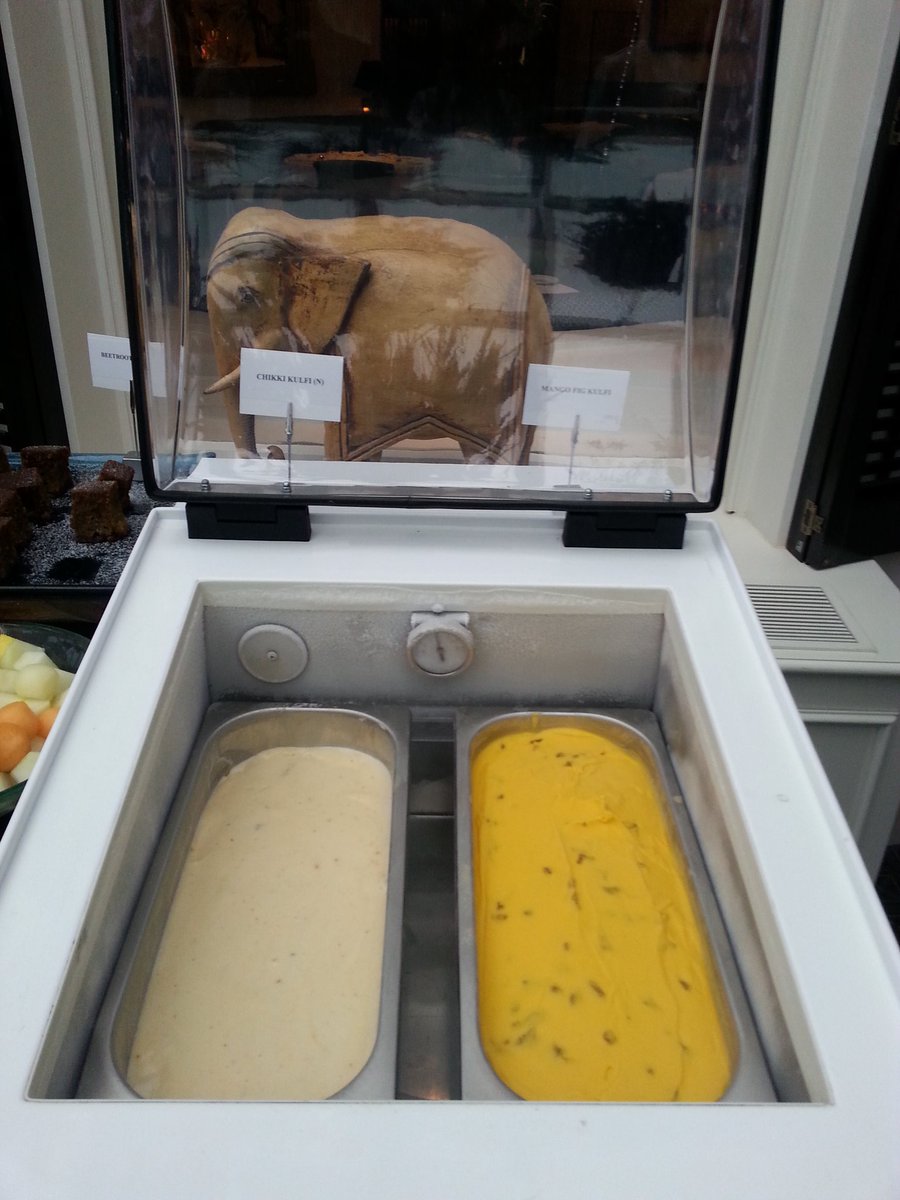 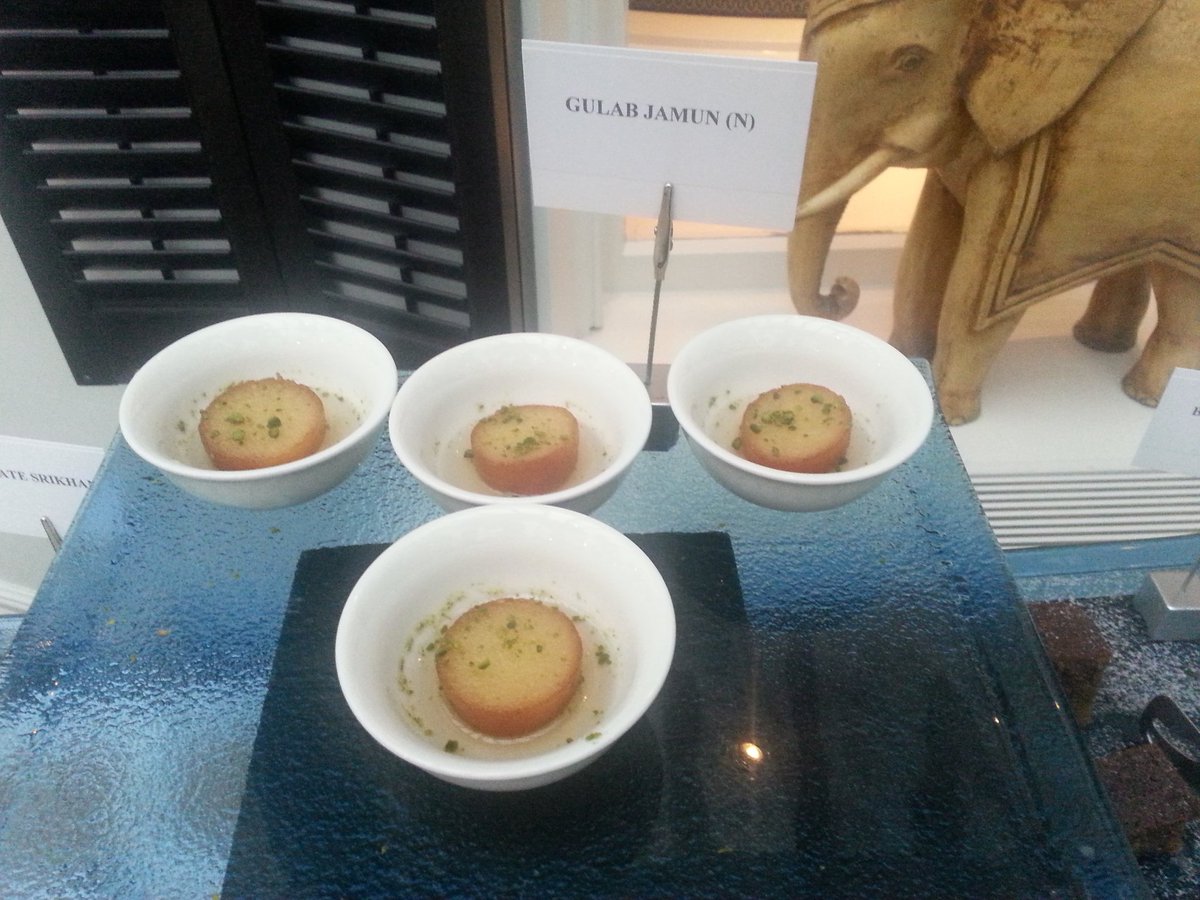 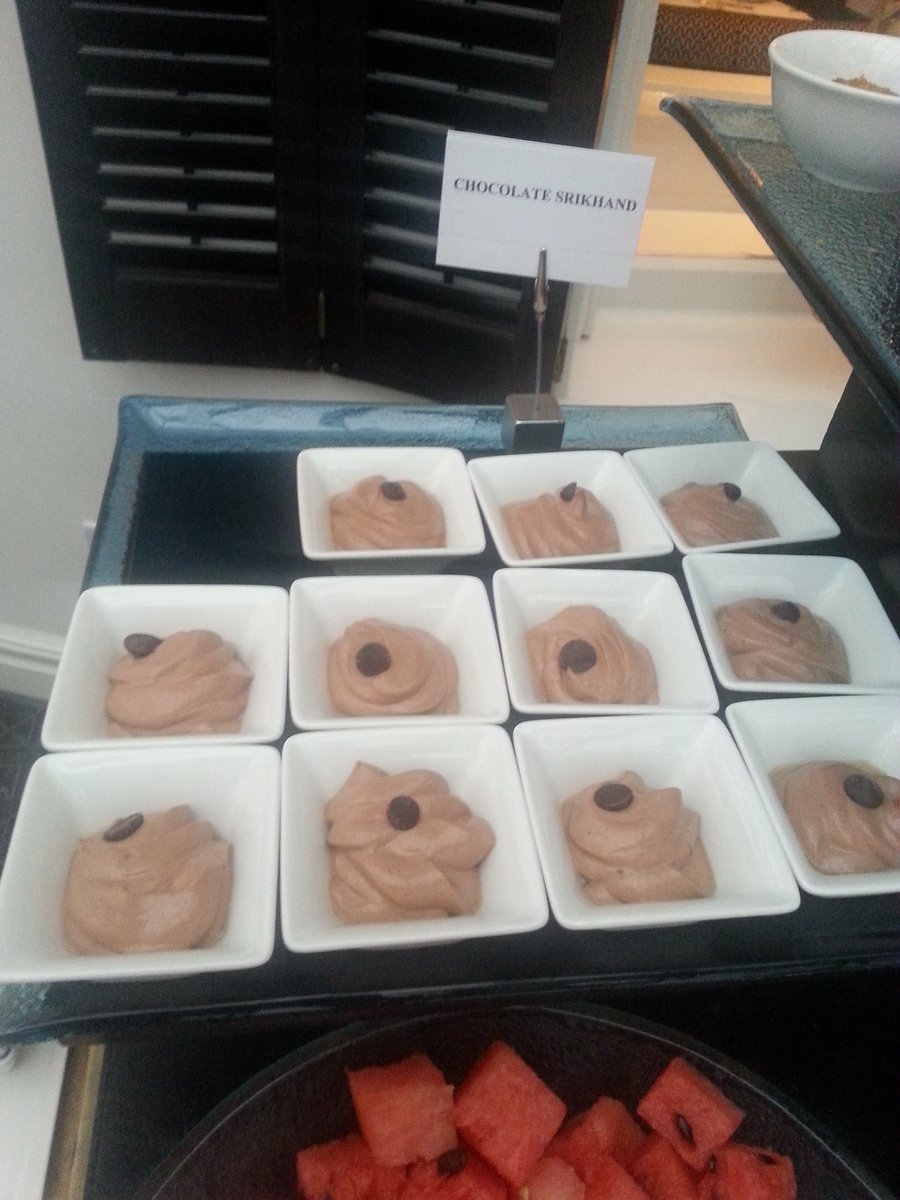 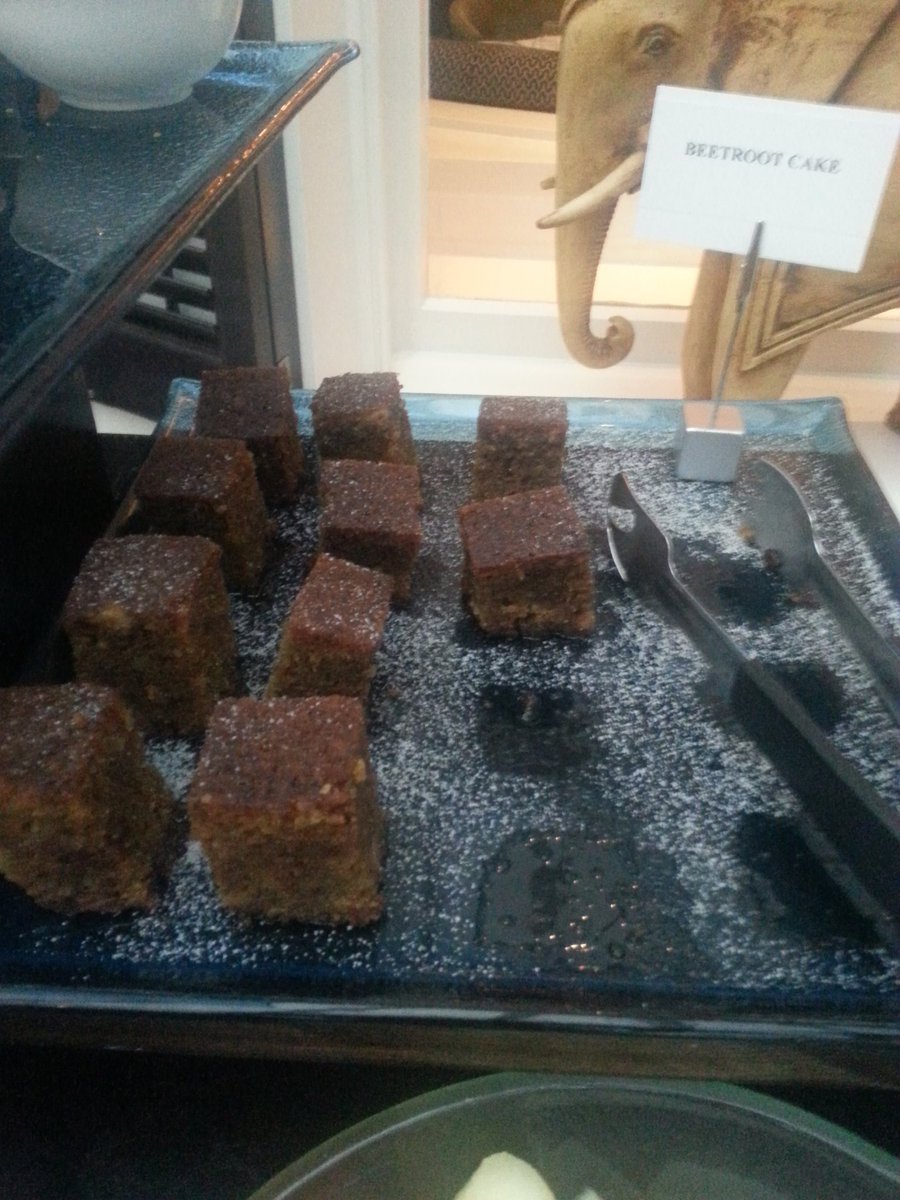 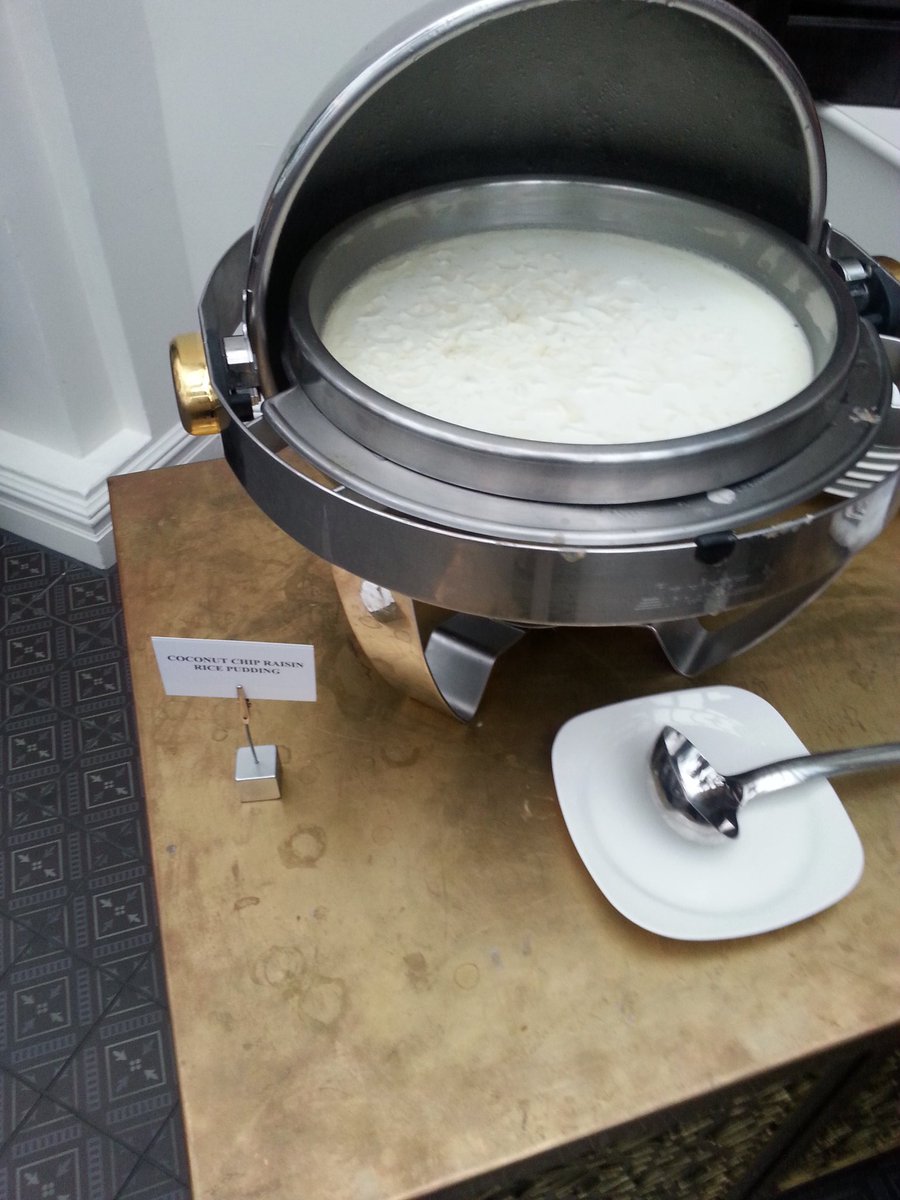 As I said before, we are dessert people and always check out menus and buffets to save space for those sweet delights at the end, so we particularly loved the mango and fig kulfi, as it had such an intense flavour! 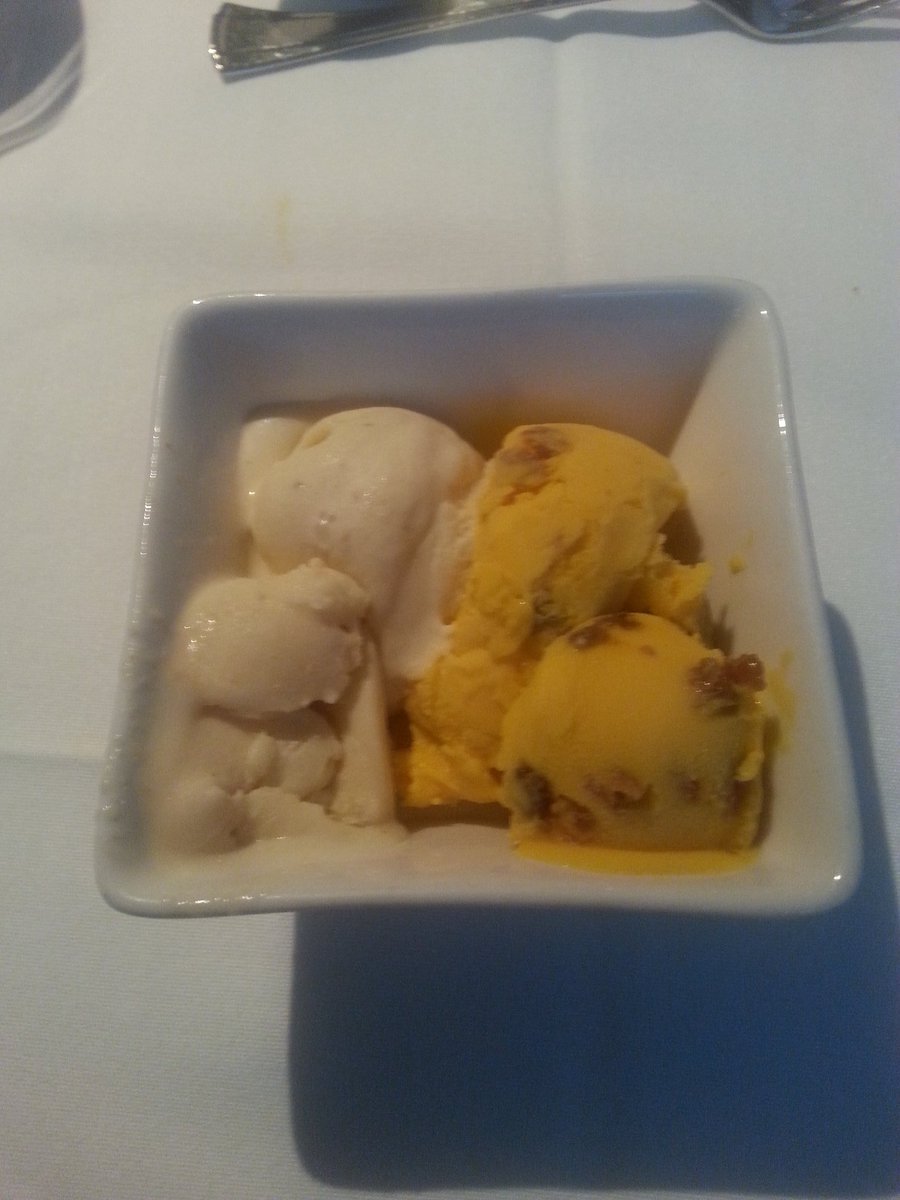 There were a few birthday parties going on at the same time, and it was a great spectacle to see cakes being brought out with several candles and one with a sparkler!

We would recommend visiting for both the ambiance and also to enjoy refined Indian cuisine with traditional, warm Taj Hotels Group service. Recommend visiting, especially for celebrations!

Enjoy an elaborate brunch at Bombay Brasserie every Saturday between 12:00-15:30 Price: £31 , excluding service

Thank you to Alexandra from Where 2 Do What for organising with Elani ( @Lans917 ) at Zomato UK for our review visit, and also to Chef Prahlad Hedge (Executive Chef), Mr Shailesh Pandya (Operations Manager), Mr Oster Fernandes (Assistant Manager) and their teams for their hospitality, especially our allocated waiters Seraj & Bernardo. We had a wonderful time and hope to see you all again soon!

International food and travel blog by London based British Goan duo: Jason and Chiara Pinto. Twitter: @goantolondon @jasonpinto100 @chiarapinto About Goa: Goa is a small state on the western coast of India. Though the smallest Indian state, Goa has played an influential role in Indian history. Goa was one of the major trade centers in India, thus it had always been attracting the influential dynasties, seafarers, merchants, traders, monks and missionaries since its earliest known history. Throughout its history Goa has undergone continual transformation, leaving an indelible impression on various aspects of its cultural and socio-economic development. History of Goa: The East-West symbiosis of Goa makes it different from other parts of India, more than the historical and social niche. The history of Goa is a sweet and sour story of colonial heritage, oppressive rulers, a glorious culture, and uneventful immediate past. As a land with the identity of its own, Goa was brought into focus when it was liberated of Portugal from its oppressive rule of around 450 hundred years in 1961. Goa was captured and annexed to the Portuguese in 1510 following the urges of trade and demand of spices and also cottons and indigo. But, Goa has a history that starts much before Portugal even thought of Goa being where it is. Goa was coveted and ruled by a great number of Indian kingdoms and dynasties from the 4th century onwards. The first kingdom to rule Goa and Konkan were Bhojas, who were the feudatories of Ashoka in 4th and 5th centuries AD. The city of Chandrapur (present Chandor) was founded by Prince Chandraditya, son of Chalukya King Pulakesin from 566 to 597 A.D. after this, Goa was ruled consecutively by Silahara Dynasty, Kadamba Danasty, and finally Hoysalas from 1022 to 1342 A.D. From the 14th century onwards, Goa became a great trading center on the west coast, especially in the vast trade of horses imported from the Middle East. This was the time for bigger empires to move in and Vijayanagar Empire conquered it in 1344. But there empire was not going to last too long and in 1347, Bahmani Sultans defeated Vijayanagara forces in 1347 and controlled Goa. Afterwards, it was a time of great prosperity and peace for Gpa, especially during the rules of Yusuf Adil Shah and Ismail Adil Shah. They created beautiful houses, fortified Goa, and encouraged local craftsmen. Their liberal and progressive rule was not going to last too long and situation changed in 1510 A.D. Goa for all purposes was not on the Portuguese Radar even after a long time of their presence in India. When the Portuguese nobleman Alfonso de Albuquerque and his cousin Francisco de Albuquerque were sent with a powerful fleet in 1503 on the orders of King Dom Manuel I, the purpose was to defend the cargoes of spices, mostly pepper, against Arab Muslim raiders. The center of spice trade was Calicut at that time and Portuguese had built forts in Cochin and Cannanore. It was in 1506-08 that an opportunistic pirate, Timoja, persuaded Albuquerque to attack Goa and acquire a better land base. This made Goa, Portugal's first real territorial acquisition in Asia. After a brief period of recapturing by the Muslims, Goa Albuquerque finally captured Goa in 1510. The inquisition of Goa in 1540 reversed the previous liberal policy of Albuquerque and imposed strict censorship of literature and new laws to forbade non-Christians from professions. Forced conversions took place continuously, censorship was established on literature, the temples were destroyed, and non-Christian priests, holy men, and teachers were evicted. This led to continuous fleeing of Hindus from Goa to other parts of India. It is not that the relationship with Portugal brought only destruction for the Goans. Portuguese also built great churches like the church of St. Cajetan and Bom Jesus basilica in Old Goa, which is a pilgrimage site for the Christians from around the world. But it is also true that pre-1961; Goa was a highly impoverished region very backward and primitive. It is after the liberation that Goa of today has emerged and it has surprised even the locals many of whom had left their homeland before its liberation. Portugal and India are today friends and Goa continues to be a fascinating blend of Latin and Oriental. Information sourced from: http://www.royalorienttrain.com/goa/goa-history.html
View all posts by goantolondon →
This entry was posted in Bombay Brasserie, Saturday Brunch, Taj Hotels Group, Where 2 Do What and tagged #foodie, #londoneats, #londonfood, #londonfoodie, #MyFab5, #SMDinerReview, #toplondonrestaurants, @bestfood.london, @ctodiwala, @SquareMeal, @top_london_restaurants, Bombay Brasserie, brunch, buffet, chaat, gloucester road, high end, indian, London, raita, Square Meal, station, Where 2 Do What. Bookmark the permalink.