Presenting Japan – Learning about Japanese Culture and Food at the QEII Centre!

Posted on November 4, 2015 by goantolondon

After enjoying the previous Presenting Japan event held in May, we were keen to understand more about Japanese Culture and Food.

We learnt about The Washoku Way – the Japanese nuanced approach to food. Intrinsic to the concept is the balance between the way foods are prepared, presented and enjoyed. Also, the approach stresses that the ingredients should be handled with care and gratitude, and that as they are the are the very source of life and so nothing should be wasted. This attention to detail ensures that your sensory experience encompasses all five senses and that the resulting food that you enjoy is pleasing to the eye. The morning session was moderated by food writer Sybil Kapoor. 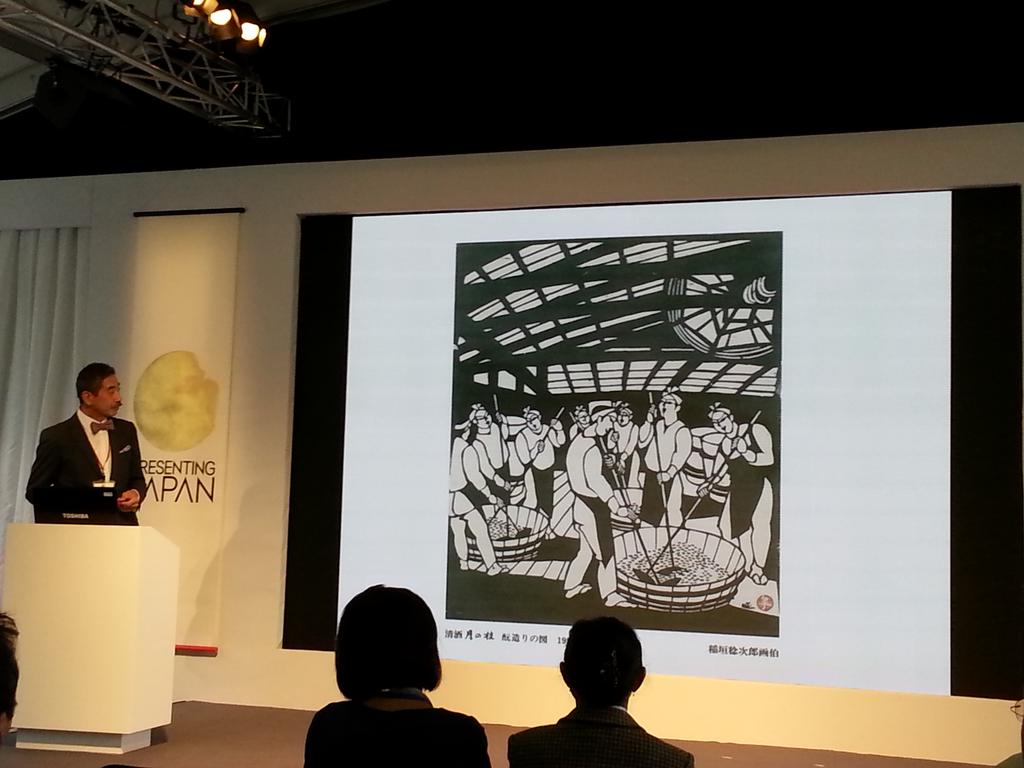 It was great watching and later briefly speaking to Chef Yoshino Ishii, Executive Head Chef of Umu Restaurant, and learning more about his passion for maintaining Japanese traditions and reflecting these in his food, but elevating them to a 2 Michelin Star level. 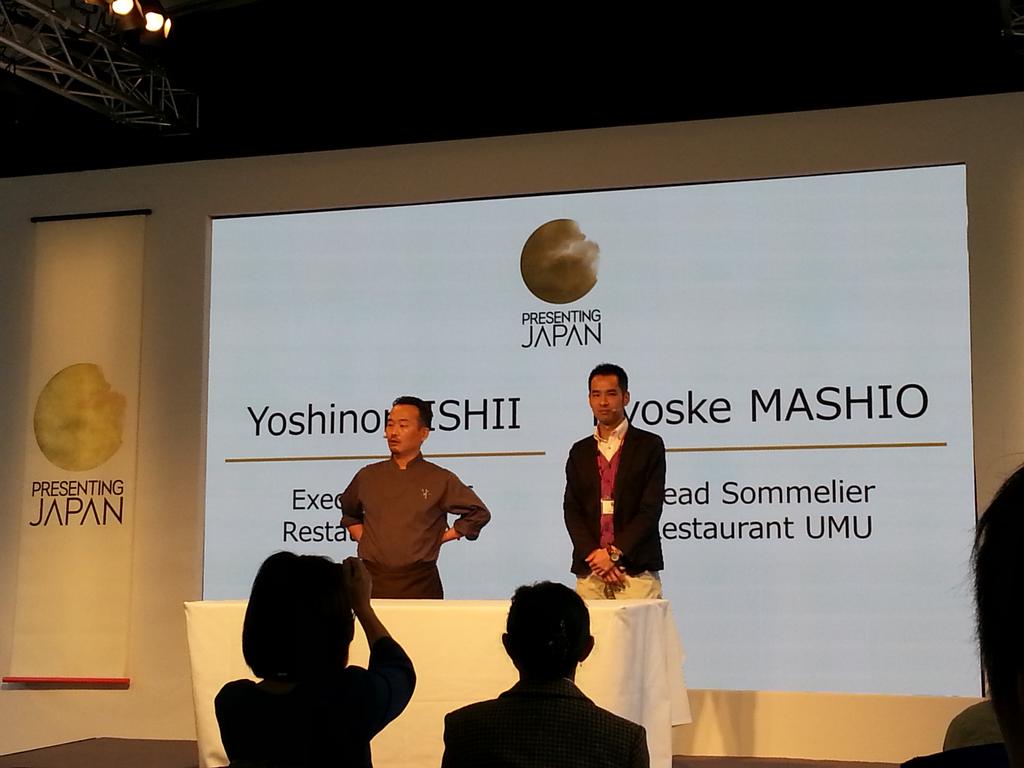 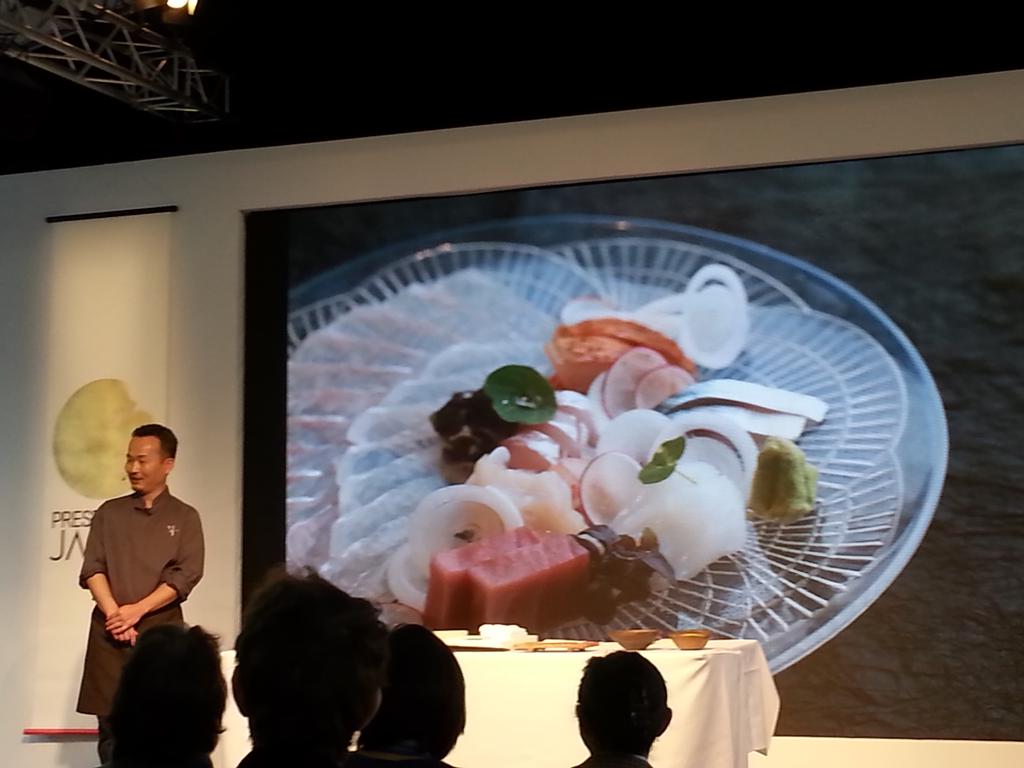 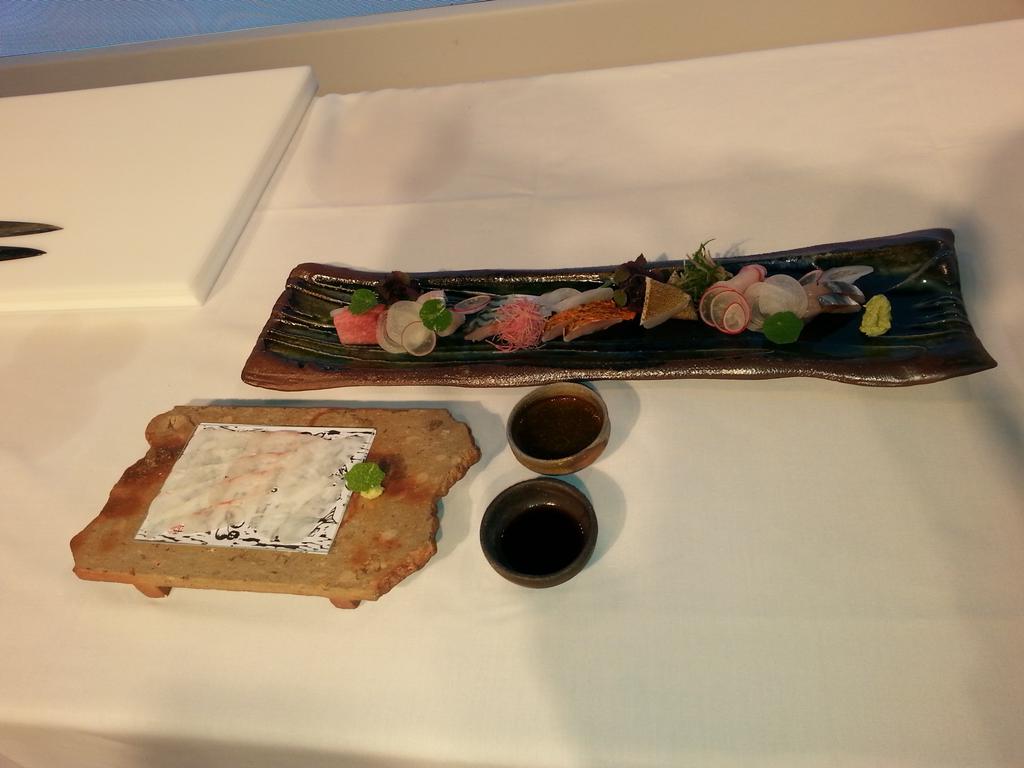 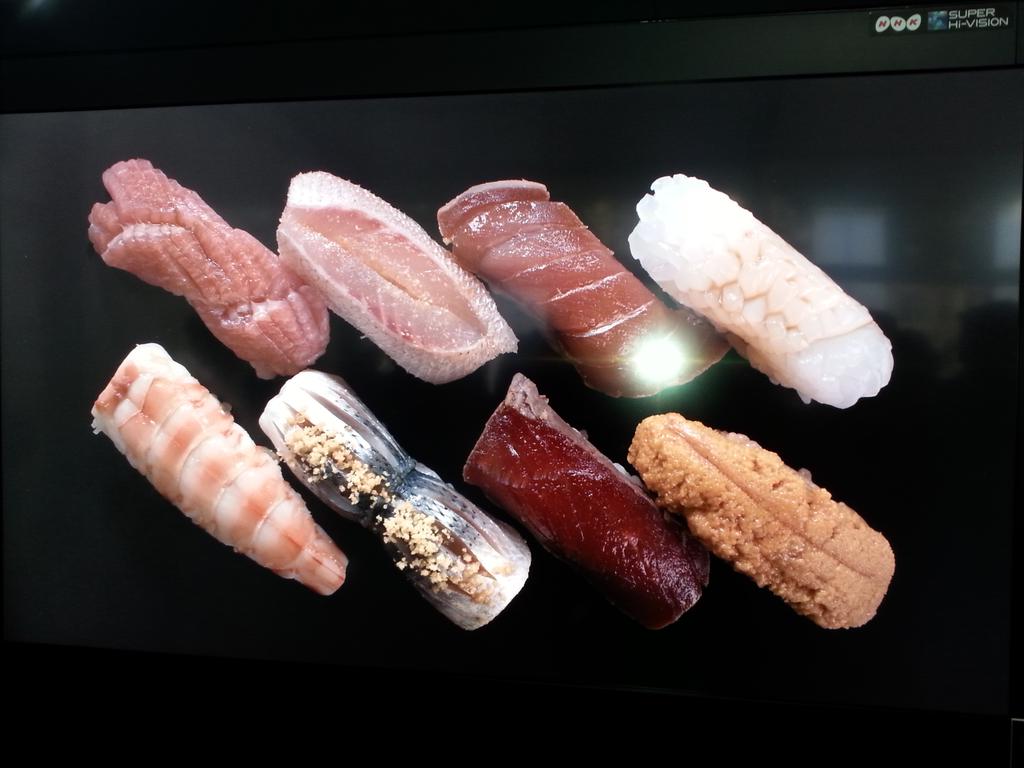 We also experienced a sake masterclass from Ryosuke Mashio, Head Sommelier at Umu Restaurant, where we learnt about the three different types of sake and six different varieties distinguished by the brewing method used; and that you can enjoy them cold, room temperature and warm which will change its characteristics making them pair well with different ingredients and dishes. Did you know that there is a sparkling sake? Neither did we! It turned out to be our favourite during the course of the food and drink pairing talk – it is carbonated sake, with a mouth feel reminiscent of champagne. 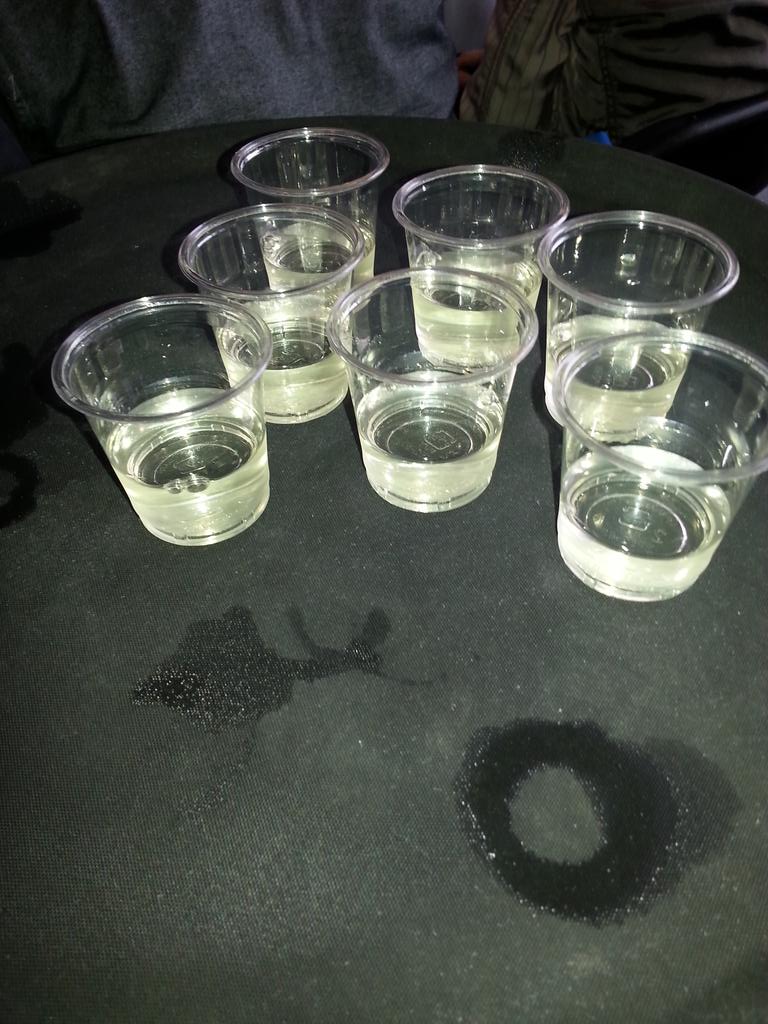 Chef Brett Graham then also shared his passions for Japanese cuisine during the next linked presentation on food pairing. 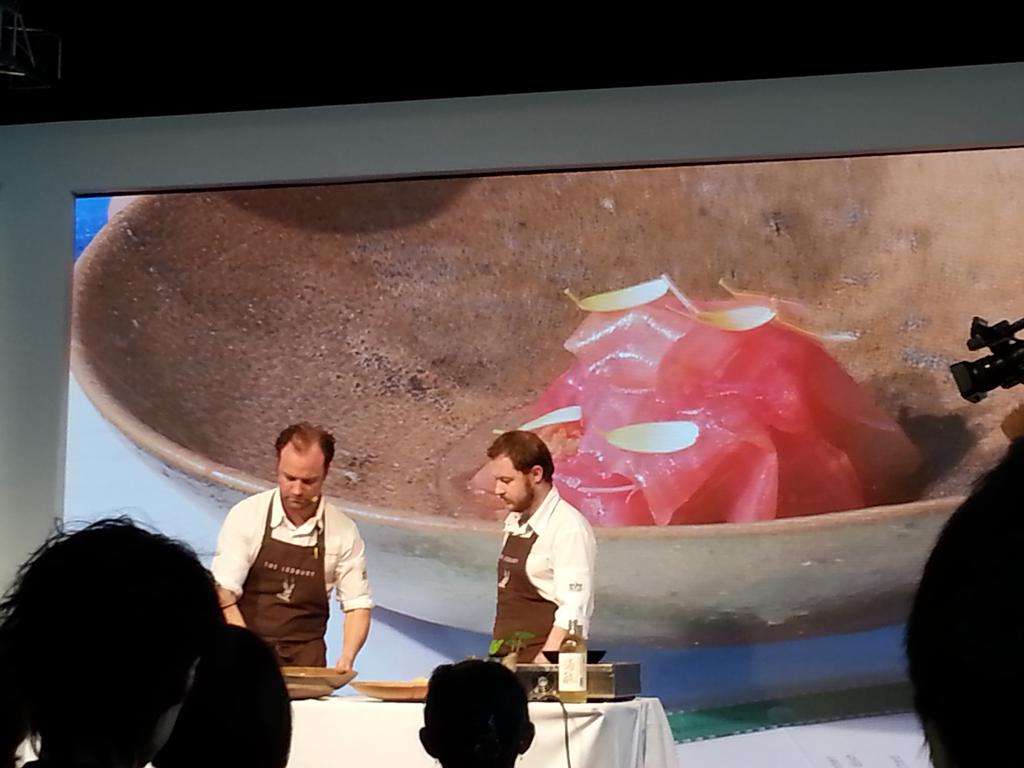 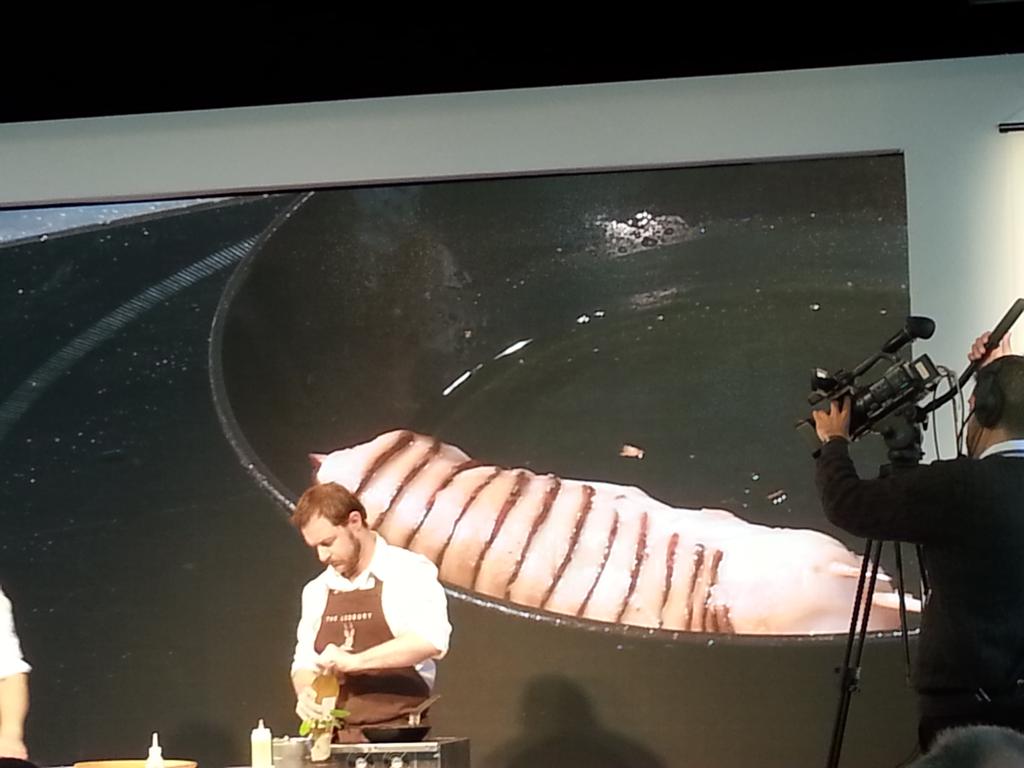 This then lead onto the following sake and food pairings:

Mussels, cream and caviar – paired with a Damon (transparent) sake 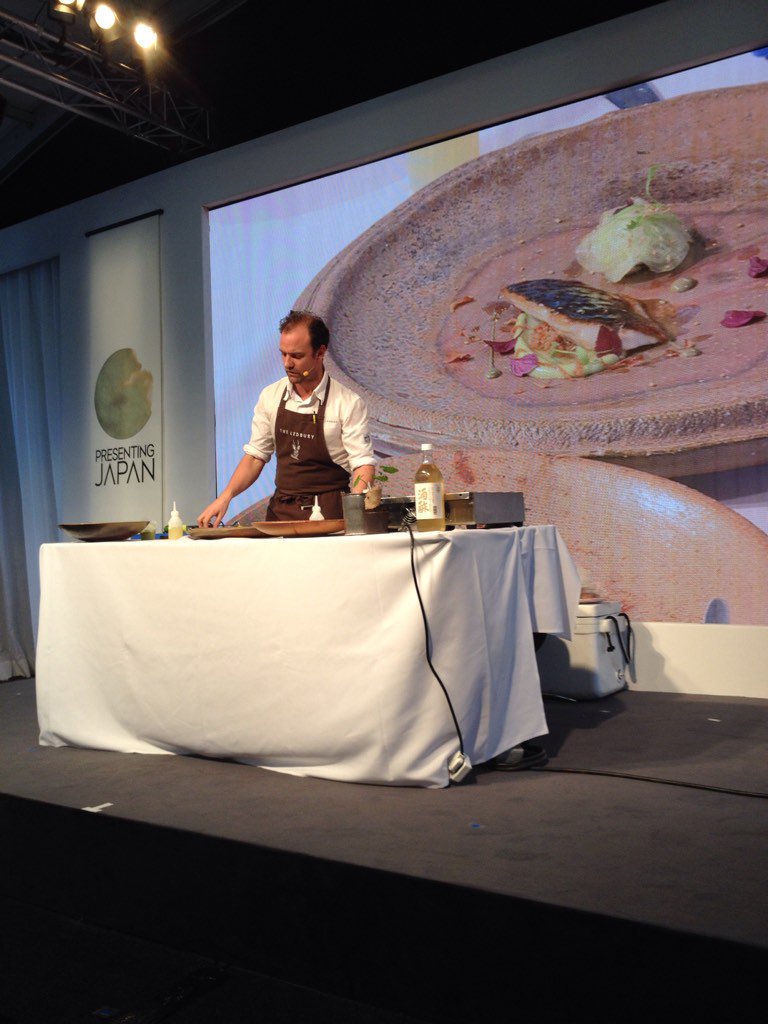 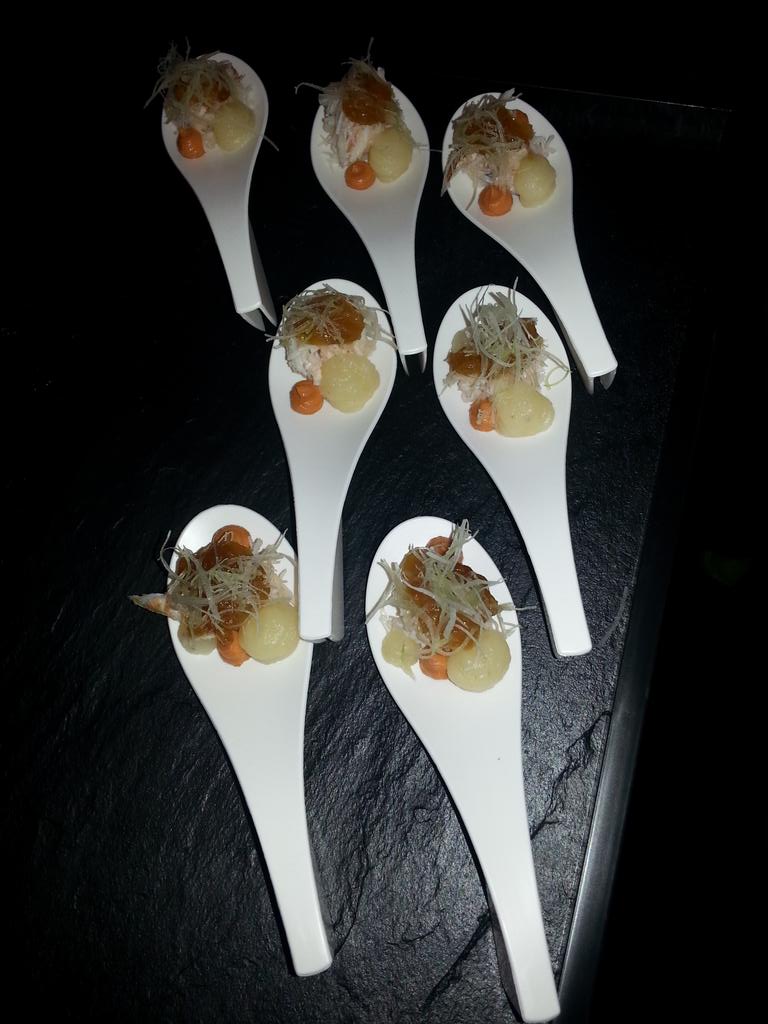 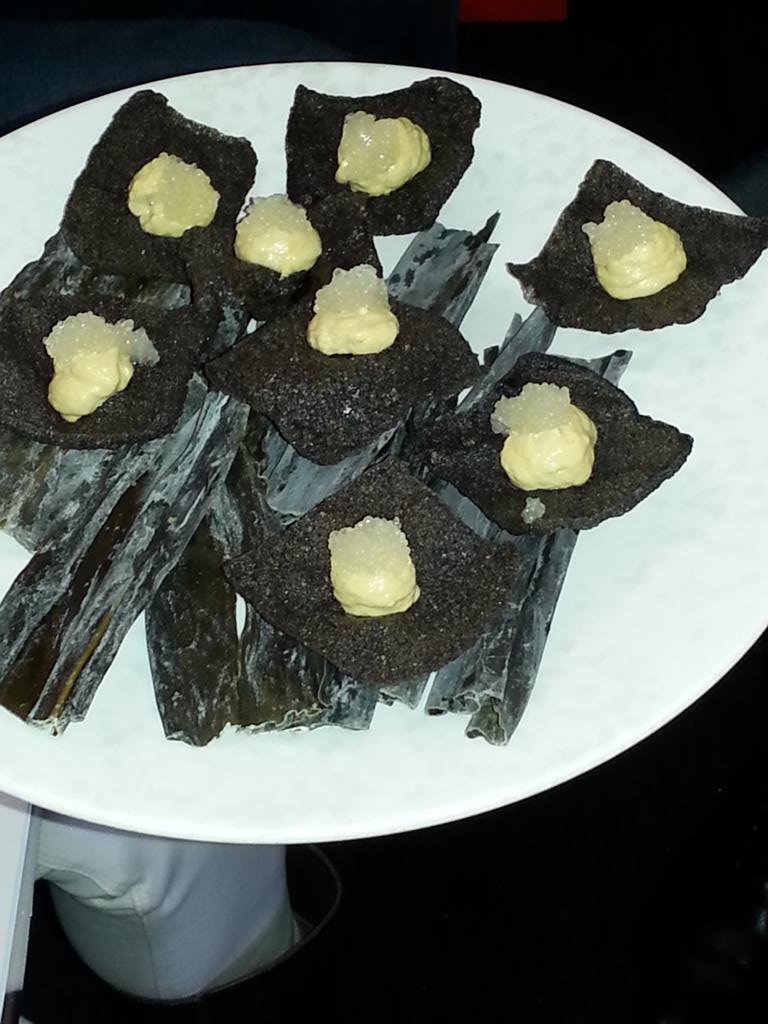 Look forward to meeting you Chef Ishii and Ryosuke again at Umu restaurant to get more of a Japanese immersive experience, and improve our knowledge about food and drinks pairings with Ryosuke!

Next, we were enthralled by the pottery skills and creations of Kazuya Ishida. 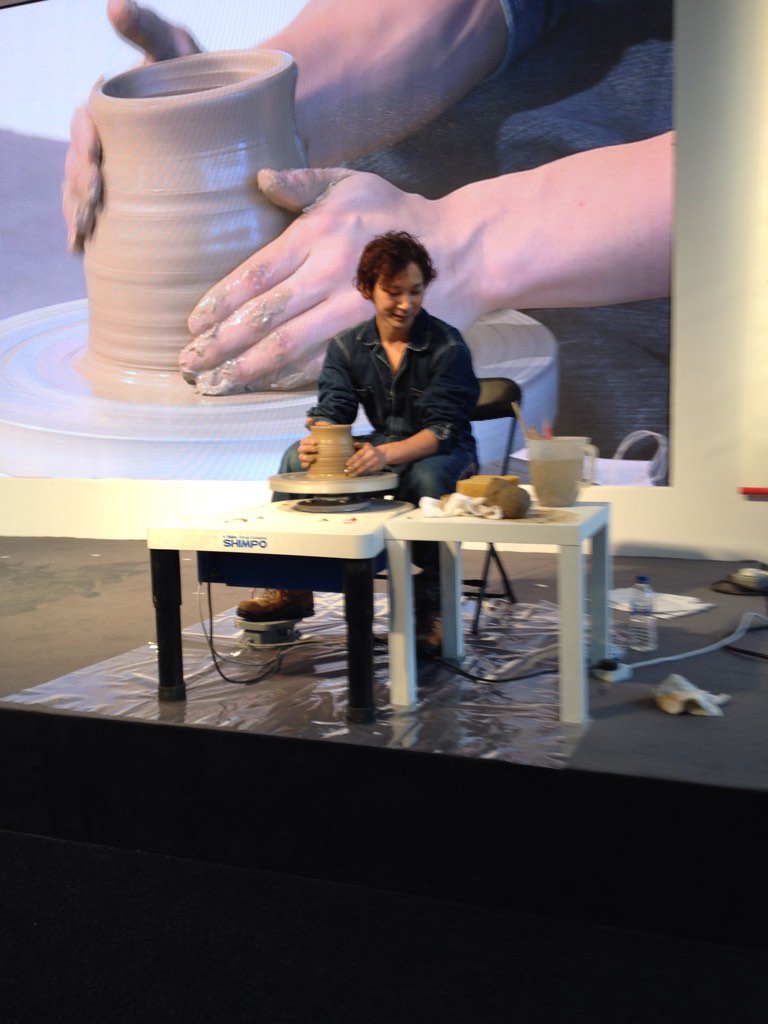 After a short break taking in the London landmarks around Westminster and stopping for tea, we returned to the QEII centre as we were excited to also be able to go to a special invite only Presenting Japan evening event, where we met fellow food blogger friends Vi Vian , Maria and Felicia and whose company we enjoyed during the evening. 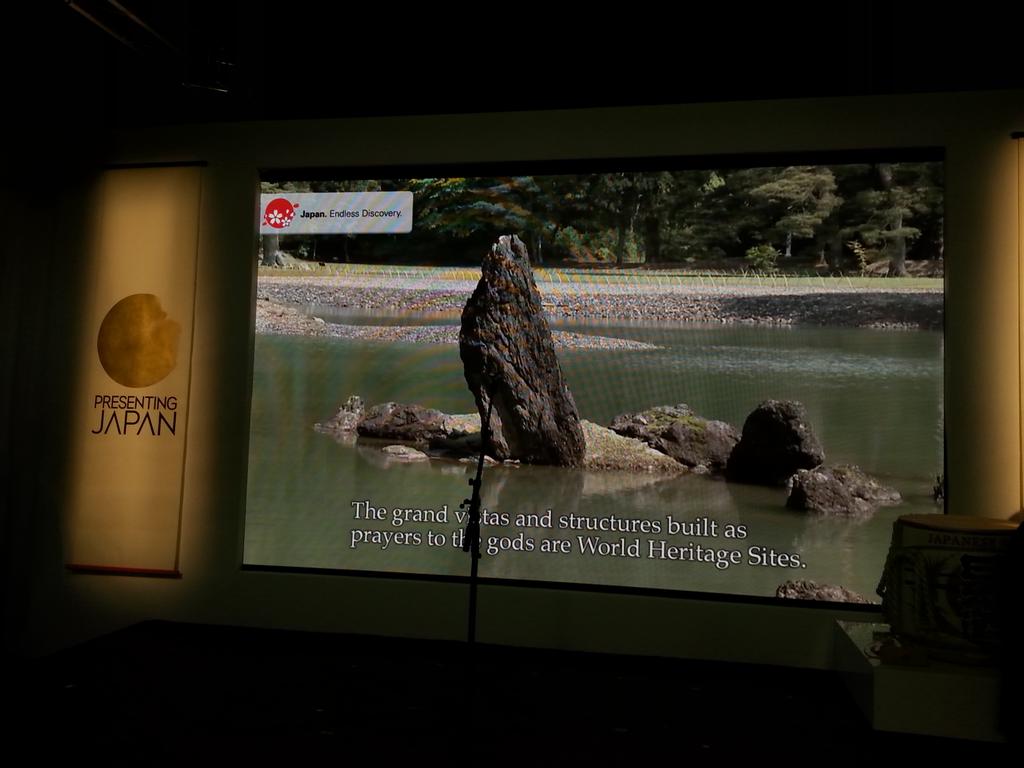 The evening included watching a traditional Sake blessing ceremony and breaking of the sake barrel, and sampling various sakes and Japanese 2 Michelin star dishes from Umu Restaurant and The Ledbury. 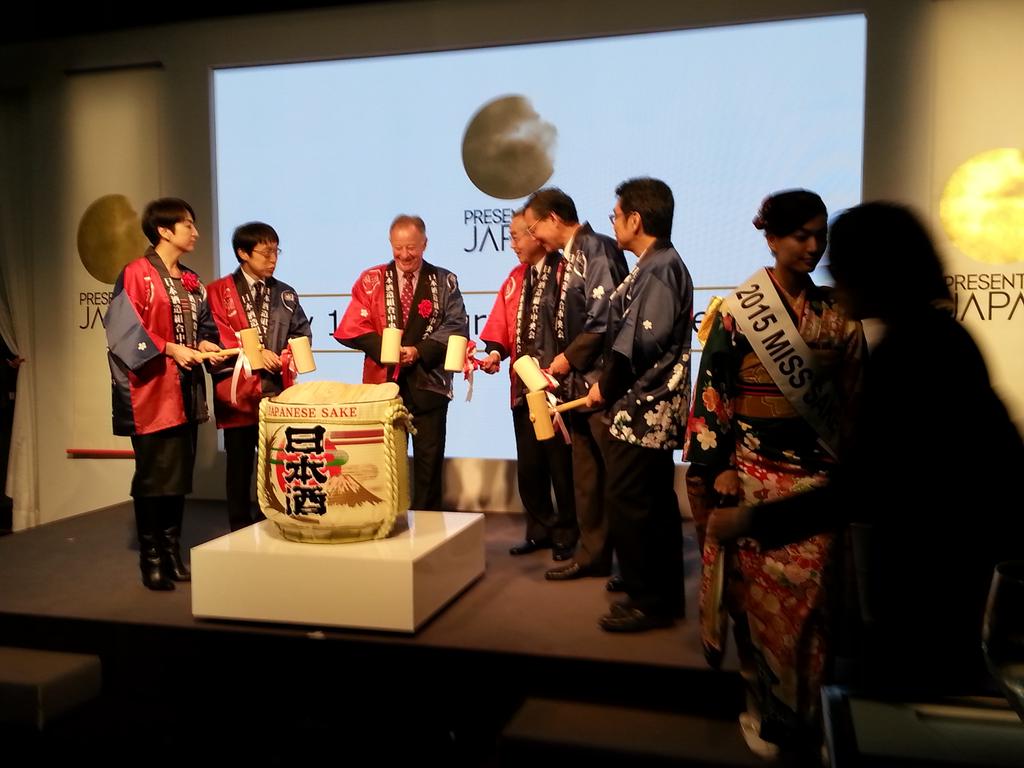 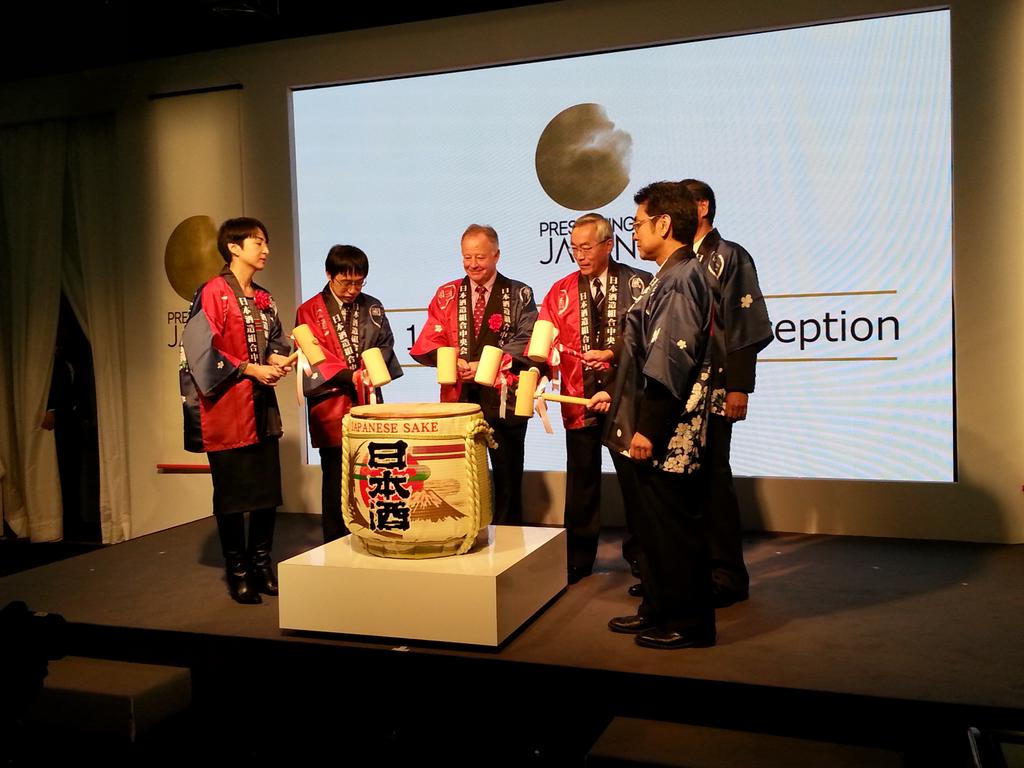 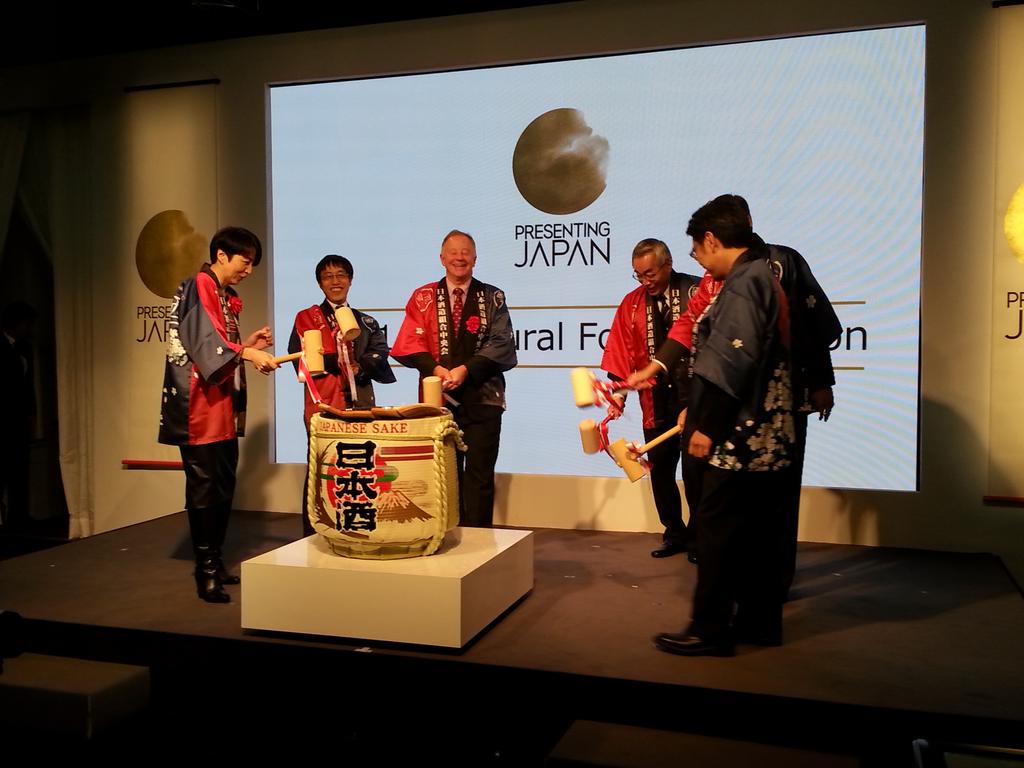 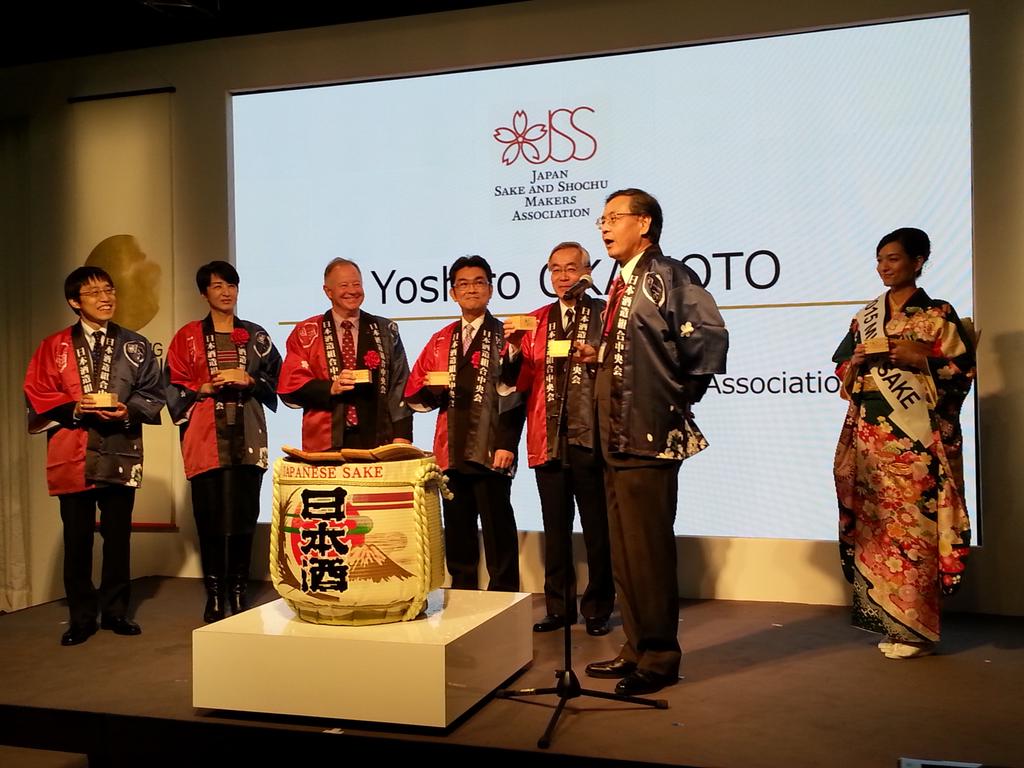 Whilst we tried the various types of sake, we sampled red bean paste and white bean paste with chestnuts from Tokimeite restaurant – the chestnut was an enlightened addition which raised the white bean paste snack to another level. 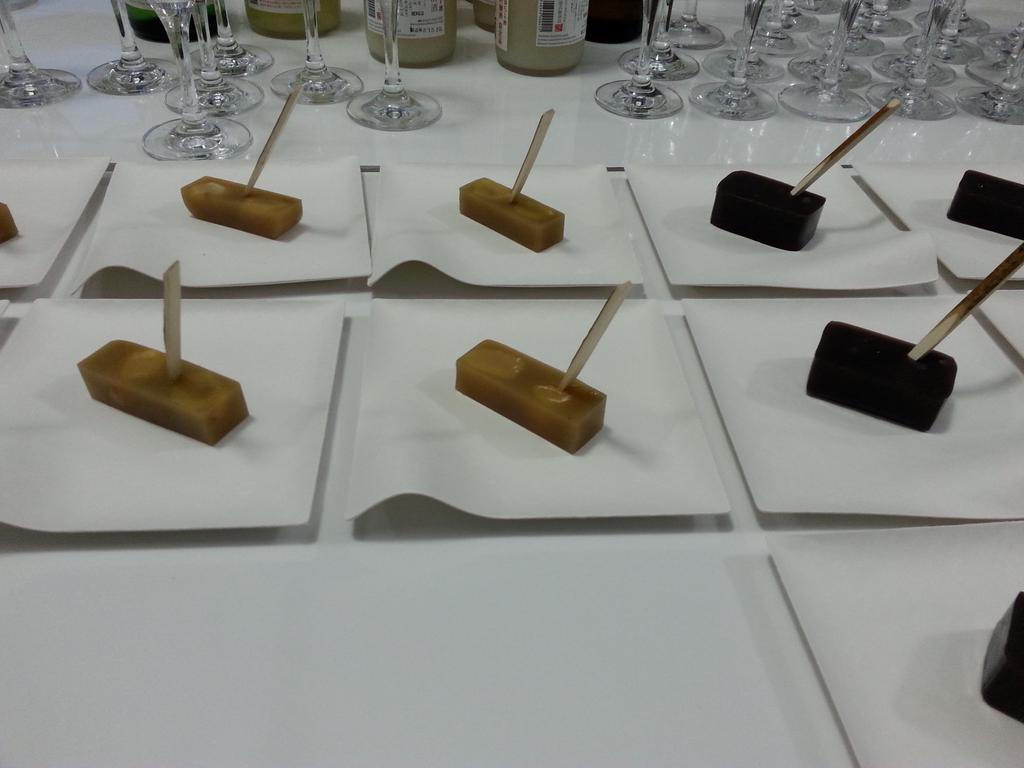 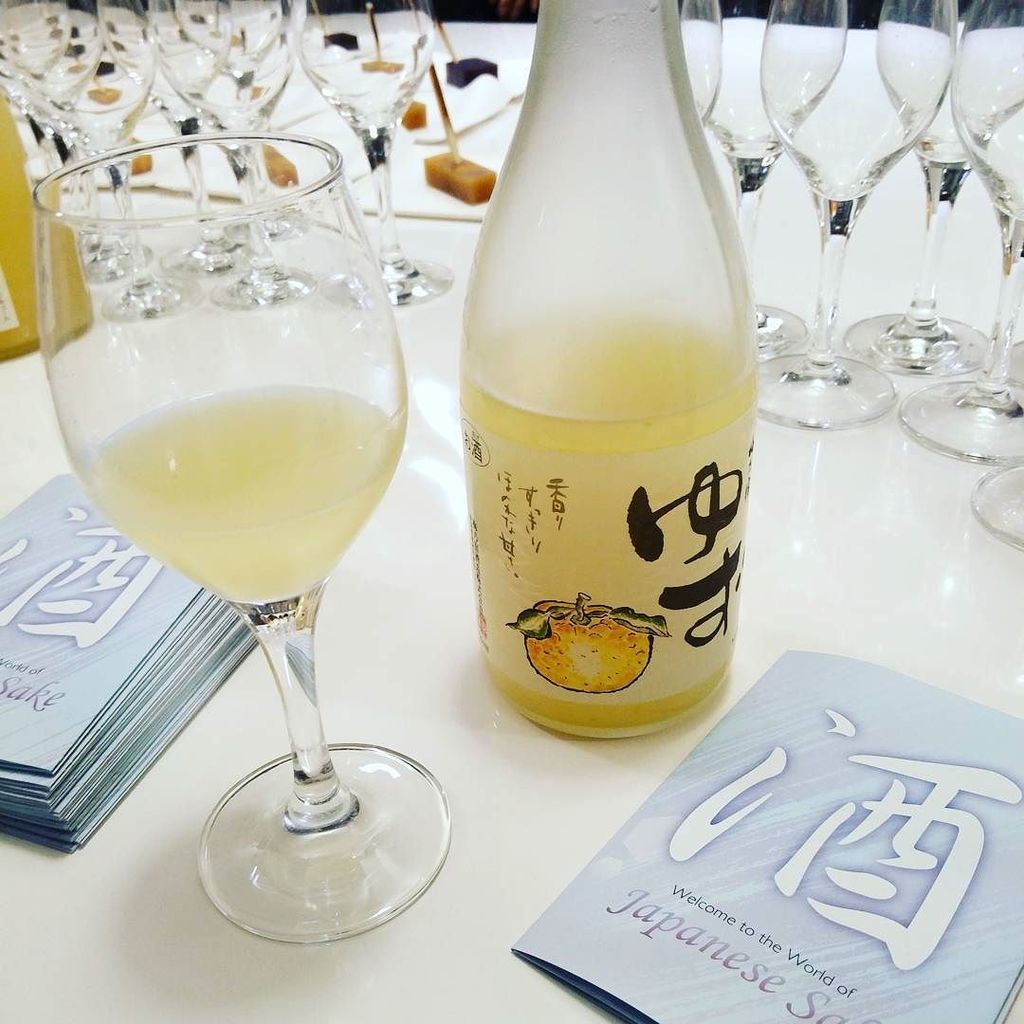 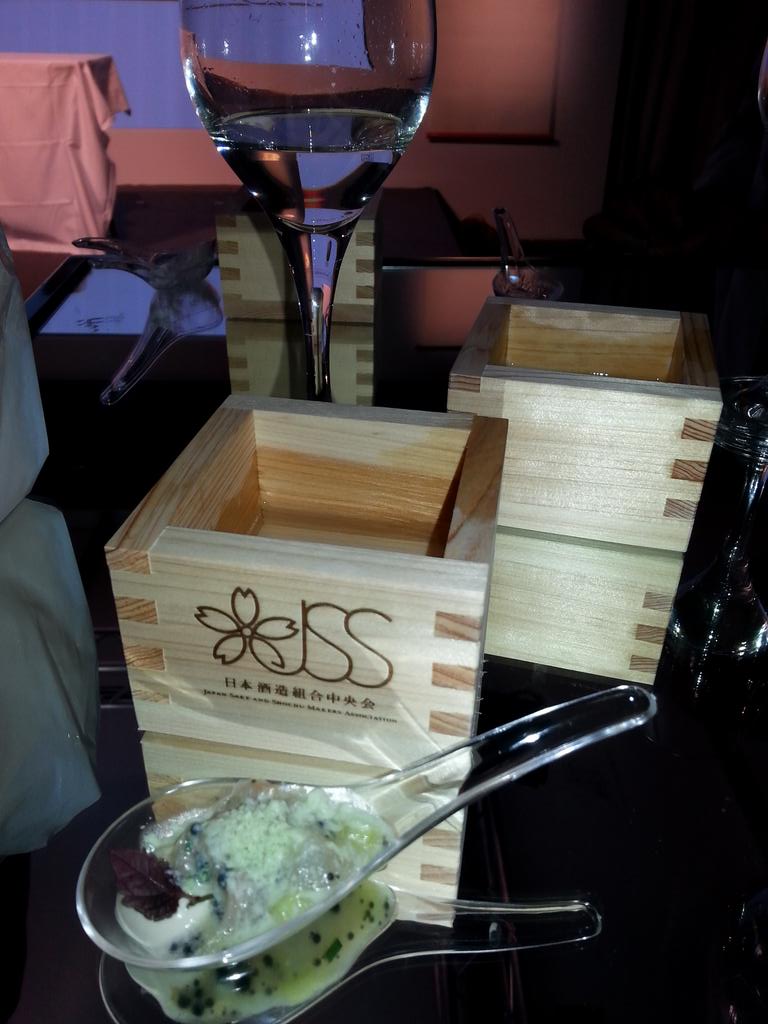 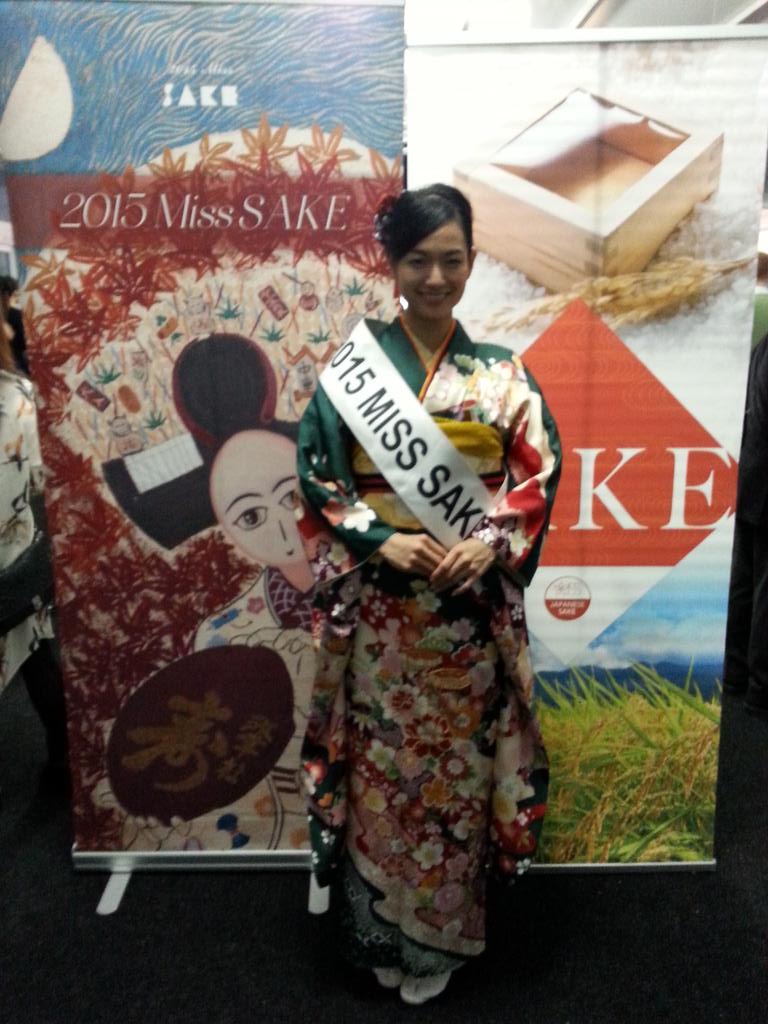 Turnip soup with Cornish crab meat, topped with miso and orange zest (a combination which we were not a fan off)

and rounded off the meal with: 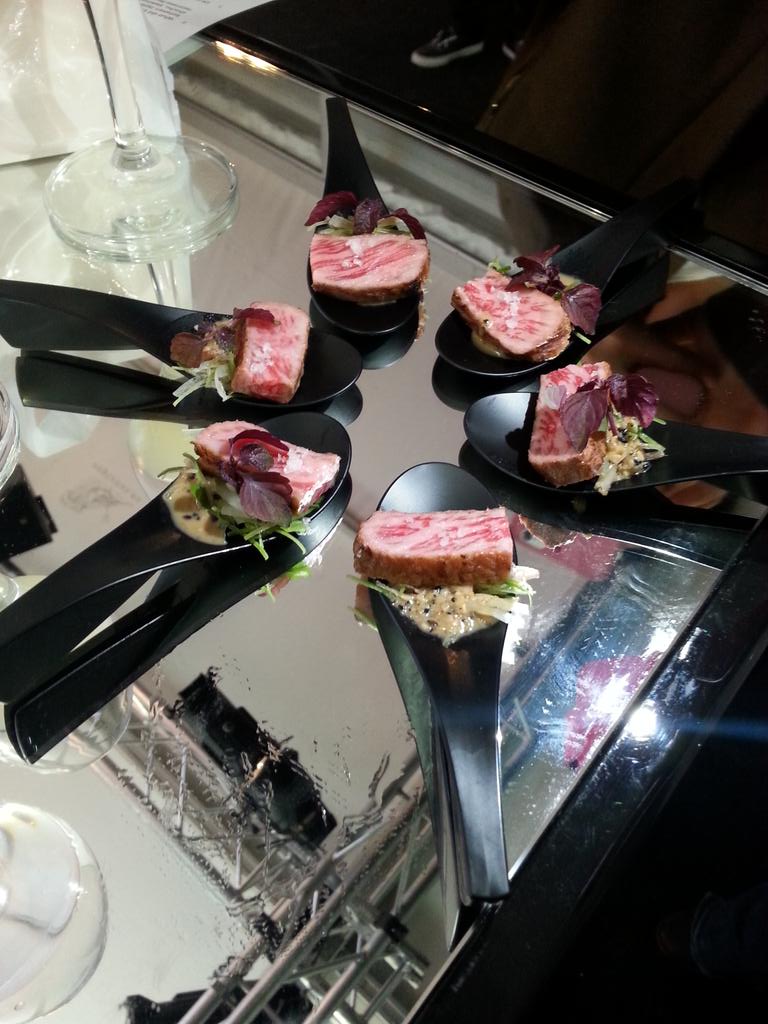 The highlights of the evening were the Wagu beef – with its trademark fine marbling, which you can see in the above picture, and which makes the slices of Wagu so succulent that they melt in the mouth; watching mochi being skillfully created by Hiromori Uchida into flower masterpieces, as well as seeing the beautiful presentation boxes that link in with the washoku philosophy; and meeting Brett Graham, Executive Head Chef of The Ledbury – we are huge fans, and are looking forward to visiting soon with some of our other fellow food blogger friends, who you also met on the evening: Vi Vian , Maria and Felicia ! We are already co-ordinating diaries. 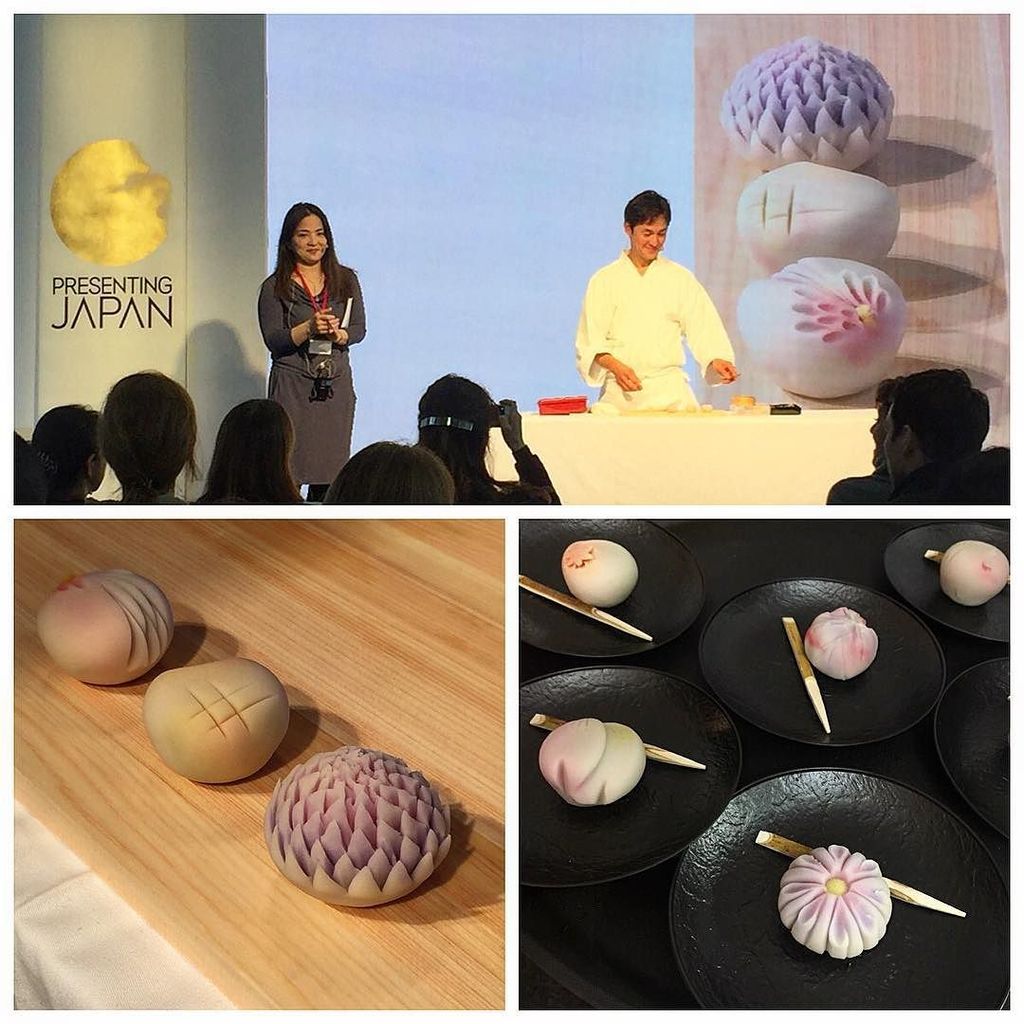 Our favourite design, the flower: 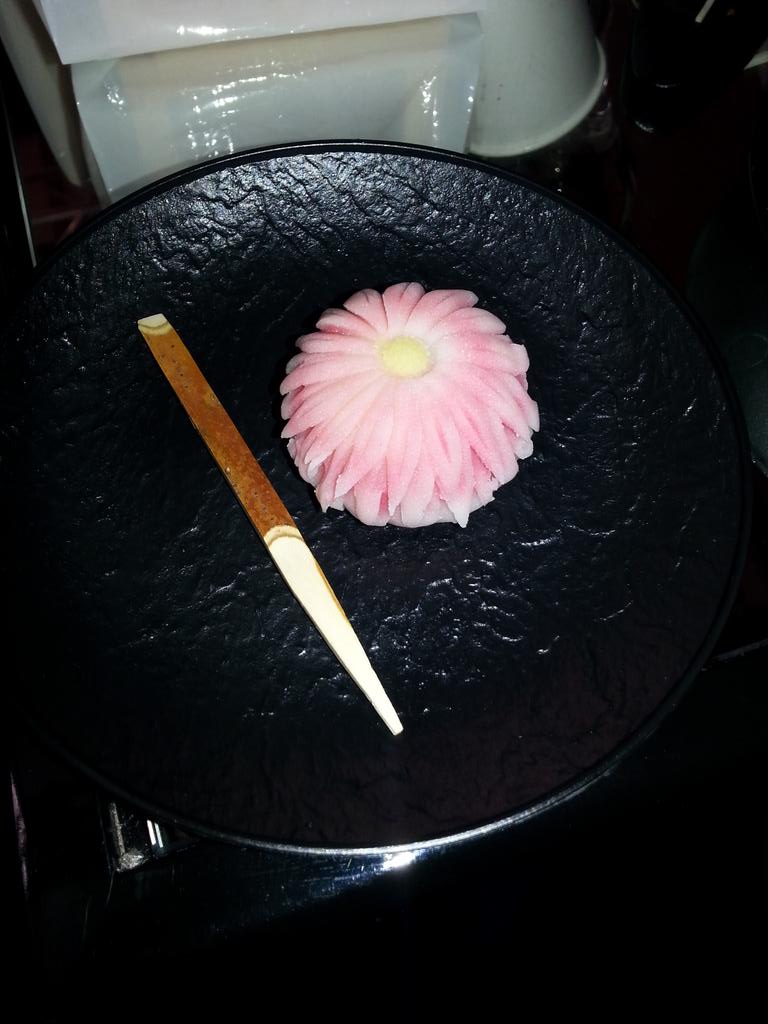 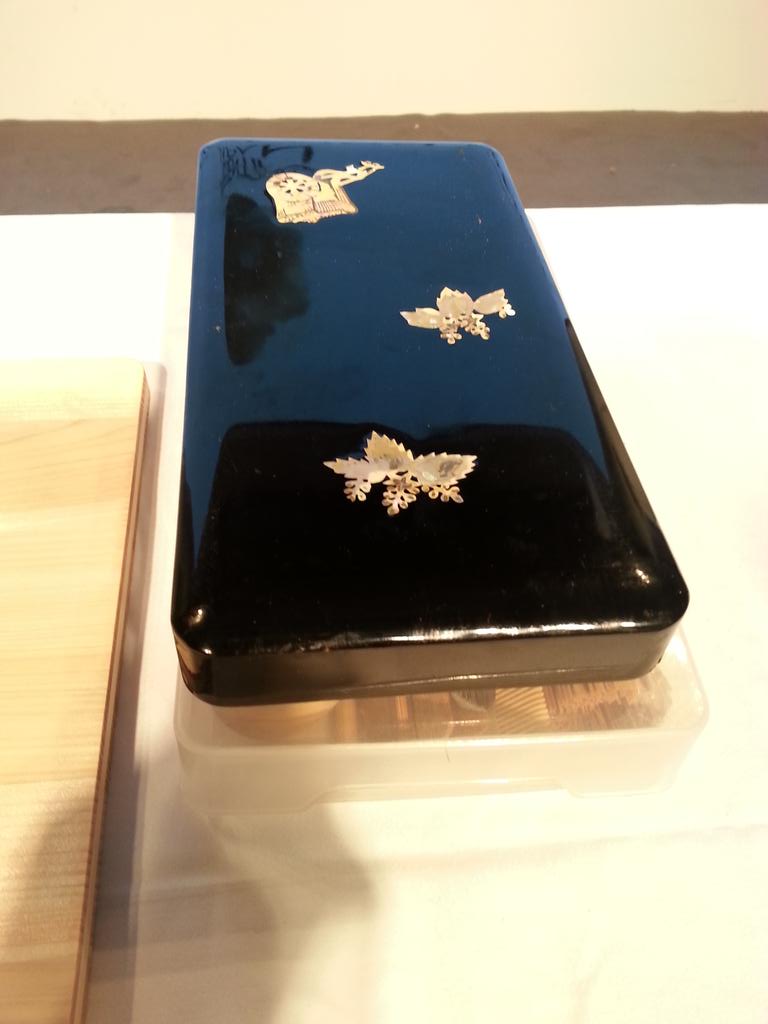 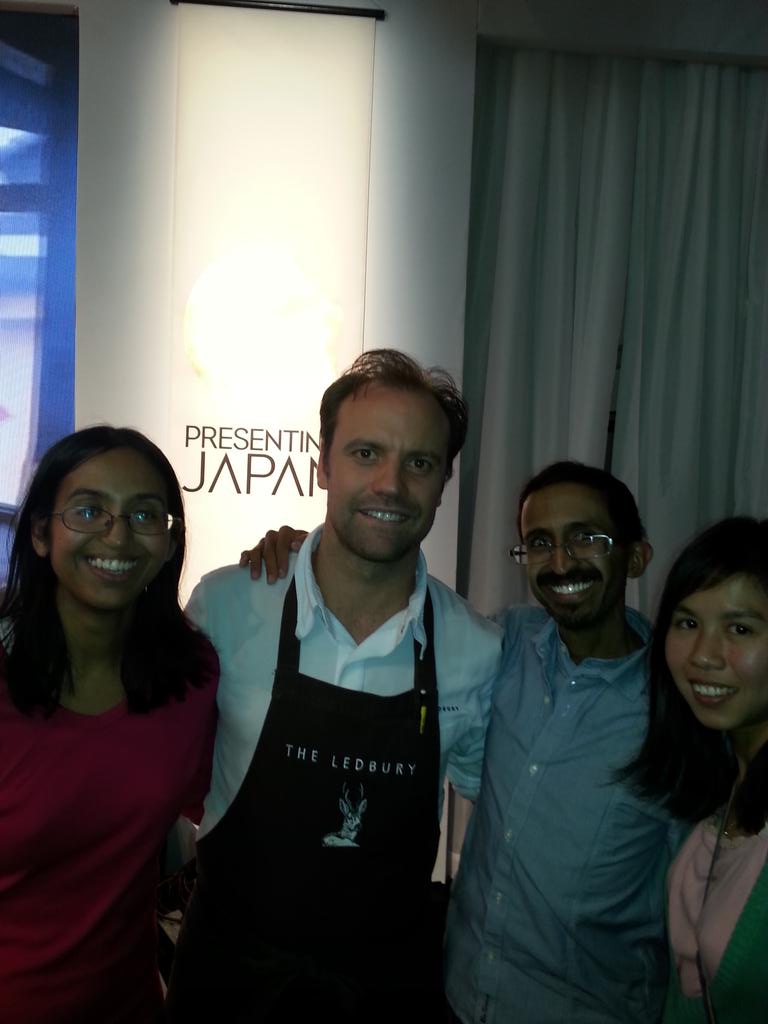 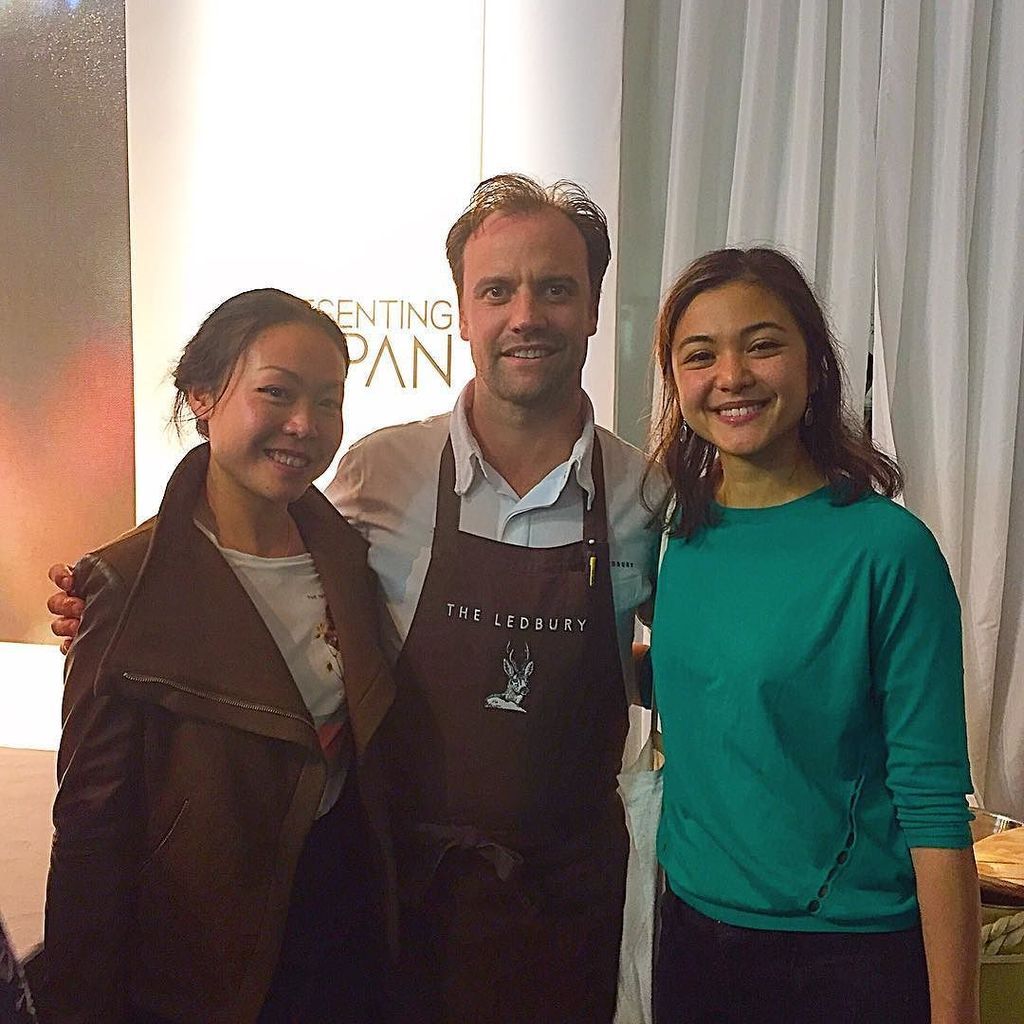 Thank you to JETRO, Presenting Japan, Chitose Nagao (Dentsu Inc Japan  – PR Division), Chef Yoshinori Ishii, Chef Brett Graham, Sommelier Ryosuke Mashio and Carl Stanley (Director of Photography, White Fox Studios – Official Photographer for Presenting Japan) for the invites and wonderful hospitality during the day and evening. It was great meeting you all and hope to see you all again soon!

For more about the previous Presenting Japan event we attended in May, 2015 at the Intercontinental Park Lane, check out the link below:

International food and travel blog by London based British Goan duo: Jason and Chiara Pinto. Twitter: @goantolondon @jasonpinto100 @chiarapinto About Goa: Goa is a small state on the western coast of India. Though the smallest Indian state, Goa has played an influential role in Indian history. Goa was one of the major trade centers in India, thus it had always been attracting the influential dynasties, seafarers, merchants, traders, monks and missionaries since its earliest known history. Throughout its history Goa has undergone continual transformation, leaving an indelible impression on various aspects of its cultural and socio-economic development. History of Goa: The East-West symbiosis of Goa makes it different from other parts of India, more than the historical and social niche. The history of Goa is a sweet and sour story of colonial heritage, oppressive rulers, a glorious culture, and uneventful immediate past. As a land with the identity of its own, Goa was brought into focus when it was liberated of Portugal from its oppressive rule of around 450 hundred years in 1961. Goa was captured and annexed to the Portuguese in 1510 following the urges of trade and demand of spices and also cottons and indigo. But, Goa has a history that starts much before Portugal even thought of Goa being where it is. Goa was coveted and ruled by a great number of Indian kingdoms and dynasties from the 4th century onwards. The first kingdom to rule Goa and Konkan were Bhojas, who were the feudatories of Ashoka in 4th and 5th centuries AD. The city of Chandrapur (present Chandor) was founded by Prince Chandraditya, son of Chalukya King Pulakesin from 566 to 597 A.D. after this, Goa was ruled consecutively by Silahara Dynasty, Kadamba Danasty, and finally Hoysalas from 1022 to 1342 A.D. From the 14th century onwards, Goa became a great trading center on the west coast, especially in the vast trade of horses imported from the Middle East. This was the time for bigger empires to move in and Vijayanagar Empire conquered it in 1344. But there empire was not going to last too long and in 1347, Bahmani Sultans defeated Vijayanagara forces in 1347 and controlled Goa. Afterwards, it was a time of great prosperity and peace for Gpa, especially during the rules of Yusuf Adil Shah and Ismail Adil Shah. They created beautiful houses, fortified Goa, and encouraged local craftsmen. Their liberal and progressive rule was not going to last too long and situation changed in 1510 A.D. Goa for all purposes was not on the Portuguese Radar even after a long time of their presence in India. When the Portuguese nobleman Alfonso de Albuquerque and his cousin Francisco de Albuquerque were sent with a powerful fleet in 1503 on the orders of King Dom Manuel I, the purpose was to defend the cargoes of spices, mostly pepper, against Arab Muslim raiders. The center of spice trade was Calicut at that time and Portuguese had built forts in Cochin and Cannanore. It was in 1506-08 that an opportunistic pirate, Timoja, persuaded Albuquerque to attack Goa and acquire a better land base. This made Goa, Portugal's first real territorial acquisition in Asia. After a brief period of recapturing by the Muslims, Goa Albuquerque finally captured Goa in 1510. The inquisition of Goa in 1540 reversed the previous liberal policy of Albuquerque and imposed strict censorship of literature and new laws to forbade non-Christians from professions. Forced conversions took place continuously, censorship was established on literature, the temples were destroyed, and non-Christian priests, holy men, and teachers were evicted. This led to continuous fleeing of Hindus from Goa to other parts of India. It is not that the relationship with Portugal brought only destruction for the Goans. Portuguese also built great churches like the church of St. Cajetan and Bom Jesus basilica in Old Goa, which is a pilgrimage site for the Christians from around the world. But it is also true that pre-1961; Goa was a highly impoverished region very backward and primitive. It is after the liberation that Goa of today has emerged and it has surprised even the locals many of whom had left their homeland before its liberation. Portugal and India are today friends and Goa continues to be a fascinating blend of Latin and Oriental. Information sourced from: http://www.royalorienttrain.com/goa/goa-history.html
View all posts by goantolondon →
This entry was posted in Japanese, JETRO, Presenting Japan - JETRO / MAFF Japan Events, sake and food pairings, seafood, Sushi, Westminster and tagged #2MichelinStars, #BrettGraham, #culturaljapan, #Culture, #foodpairings, #Japan, #JapaneseFood, #presentingjapan, #transportedto, #whitefoxstudios, @DentsuPR, @experiencejapan, @flyme360magazine, @InsideJapan, @JapanGov, @JETRO_info, @jpflondon, @JSS_MAFF, @MAFF_JAPAN, @MariaSisci, @MichelinGuideUK, @SquareMeal, @SybilKapoor, @the_cheeksterx, @TimeOutTokyo, @tokimeitelondon, @UmuRestaurant, @vi_woo, Big Ben, Brett Graham, cuisine, Cultural Japan, food, food pairings, House of Commons, Houses of Parlimanent, Japanese, JETRO, learning, London, London Eye, MAFF Japan, nigiri, Notting Hill, Presenting Japan, QEII Centre, sake, sashimi, sushi, The Ledbury, The Washoku Way, travel, Two Michelin Star, Umu Restaurant, washoku, Westminster, Westminster Bridge. Bookmark the permalink.