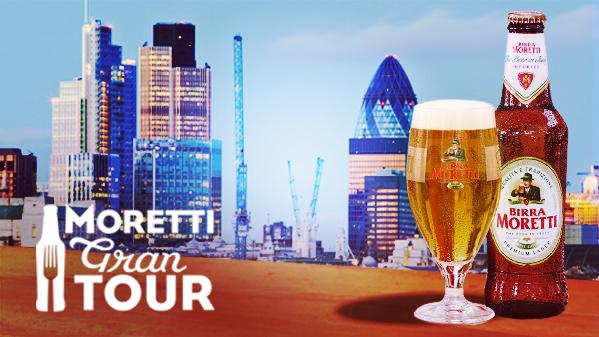 We loved the cool vibe of The Courtyard at Space Studios when we arrived for the Moretti Grand Tour, with the wonderful smells and inviting music wafting over the walls, and then you walk into a bright, lively space. 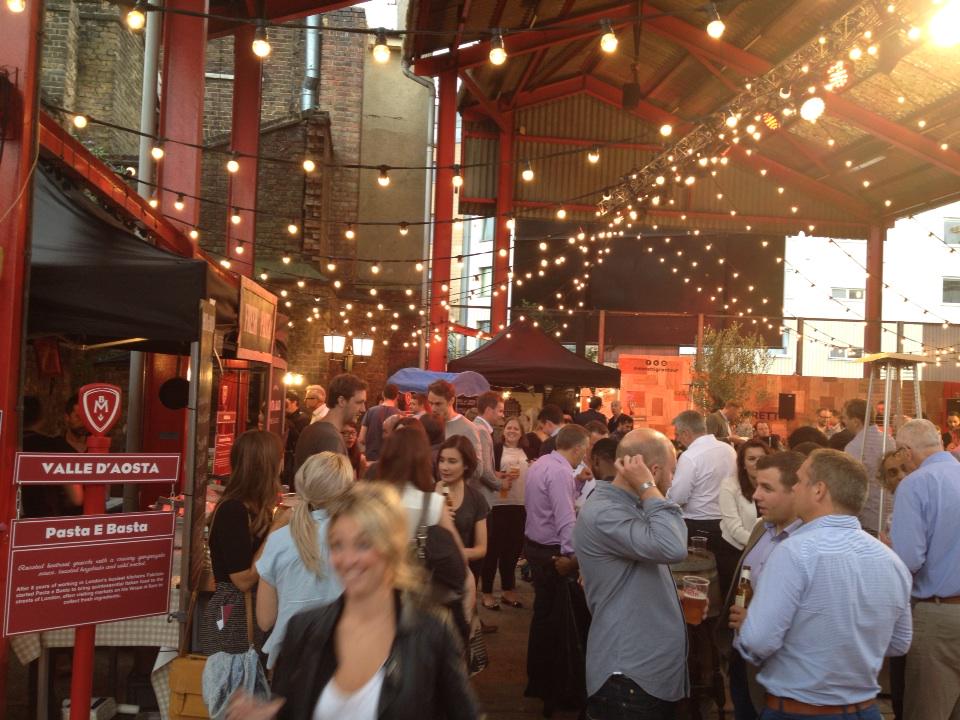 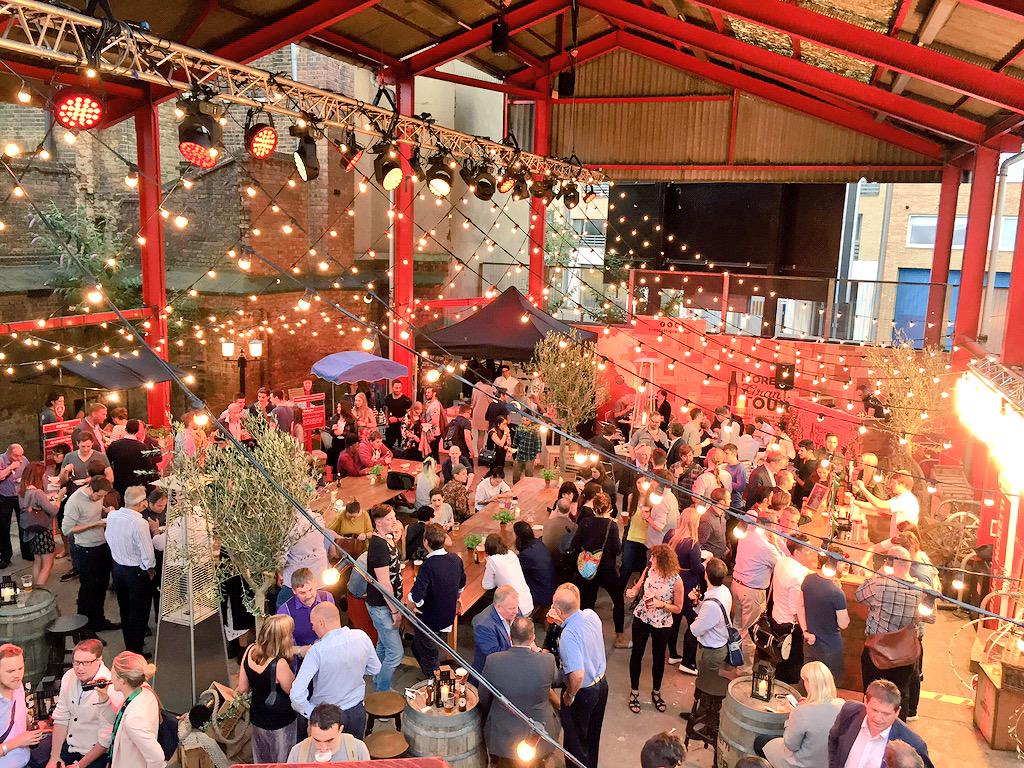 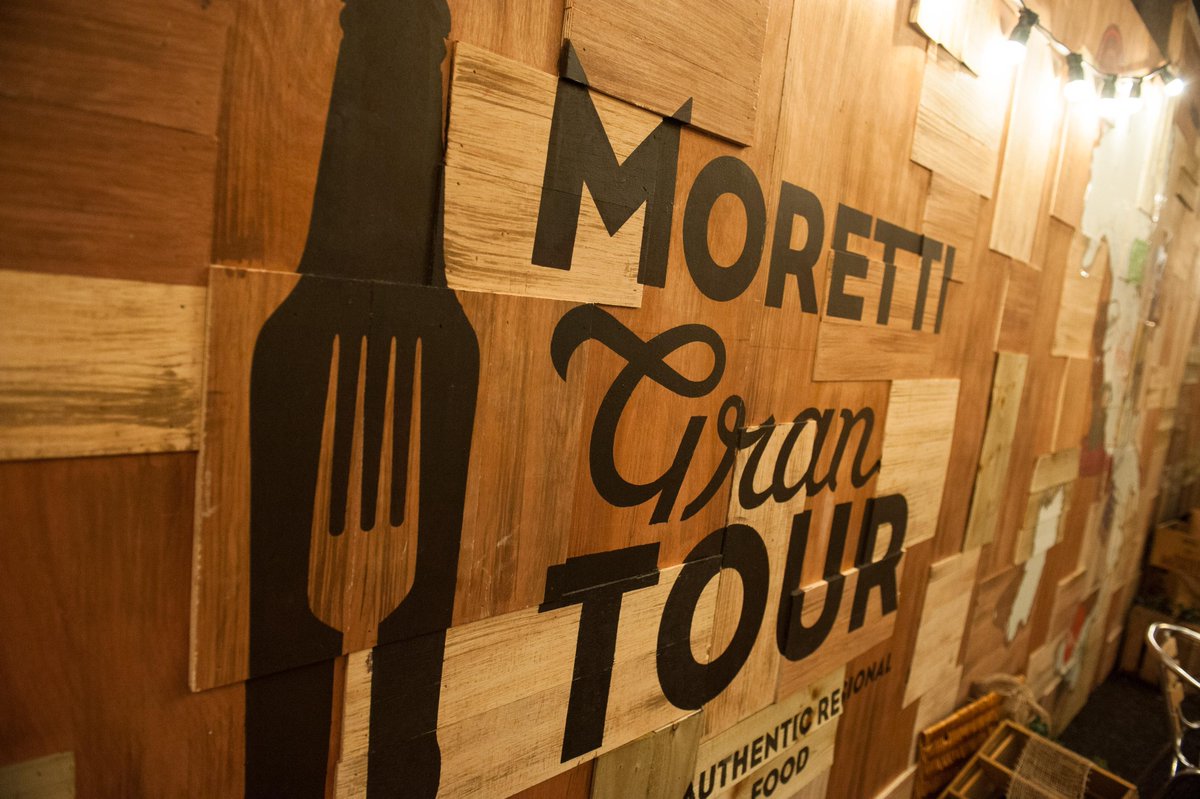 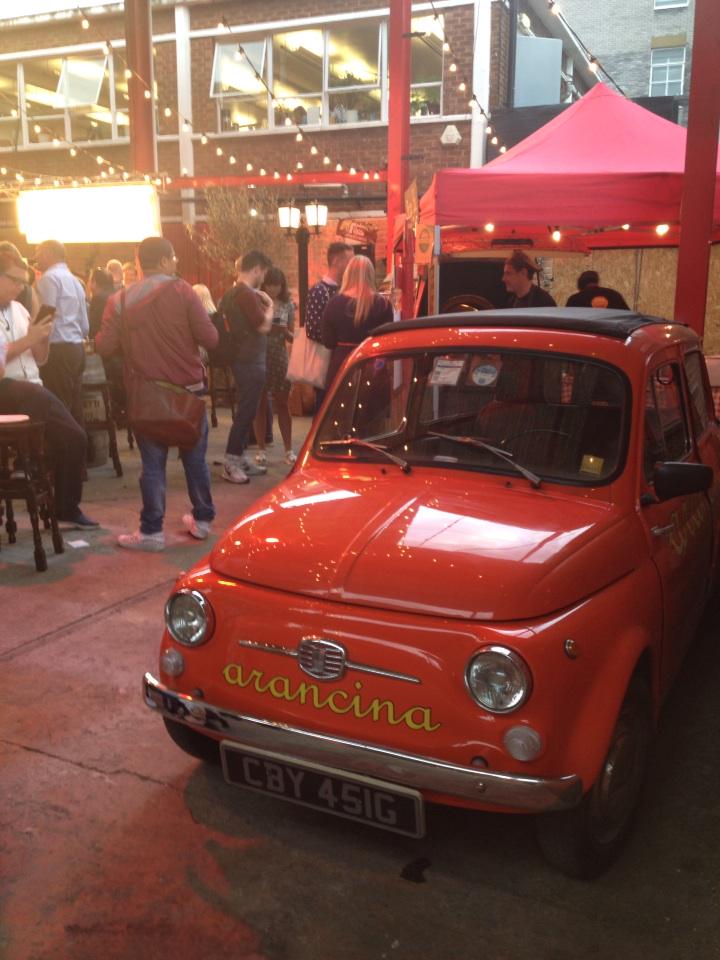 The Moretti Grand Tour returns for a second summer of great food and beer, bringing some of the UK’s finest Italian street food vendors (Arancina, Paste E Basta, Cooking Cooks, The Arancini Brothers, Wop, Gelupo and Forza Win) together under one roof, serving traditional dishes from Italian regions including Campania, Lombardia and Sicilia; alongside live music. Each vendor showcases authentic cooking methods and shares signature regional dishes they are representing, such as a pizza from Naples, arancini balls from Sicily and Panino Teca with famous truffles from Norcia.

The Gran Tour continues Birra Moretti’s rich heritage in the UK street food movement. Over the past decade, Birra Moretti has been involved with Street Feast, Urban Food Festival, Big Feastival, Pizza in the Piazza and Model Market to name just a few.

There will also be cookery masterclasses (such as the ravioli masterclass below) by Cin Cin Executive Chef Luke Robinson for you to learn the techniques required to cook delicious Italian dishes yourself.

Don’t forget to enjoy a glass or more of the cold, refreshing Birra Moretti! 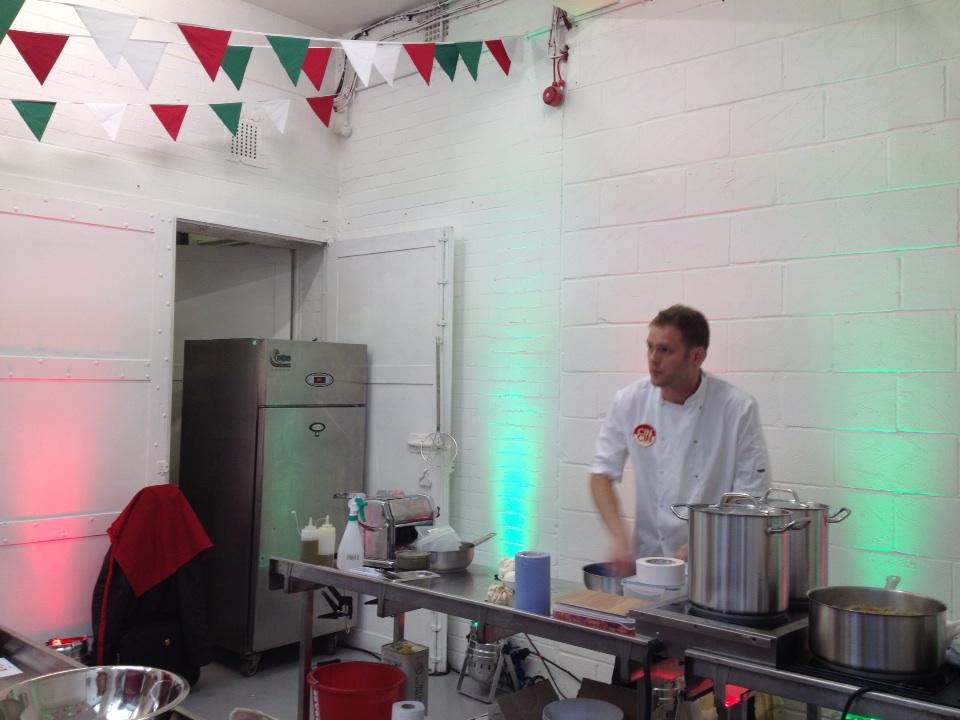 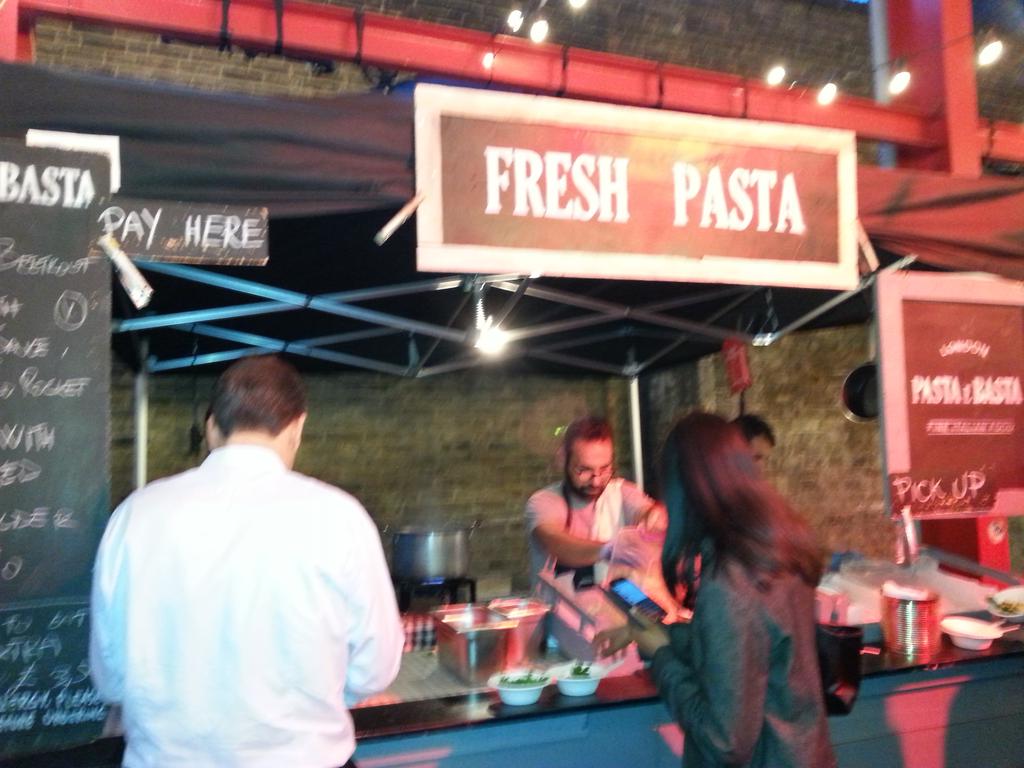 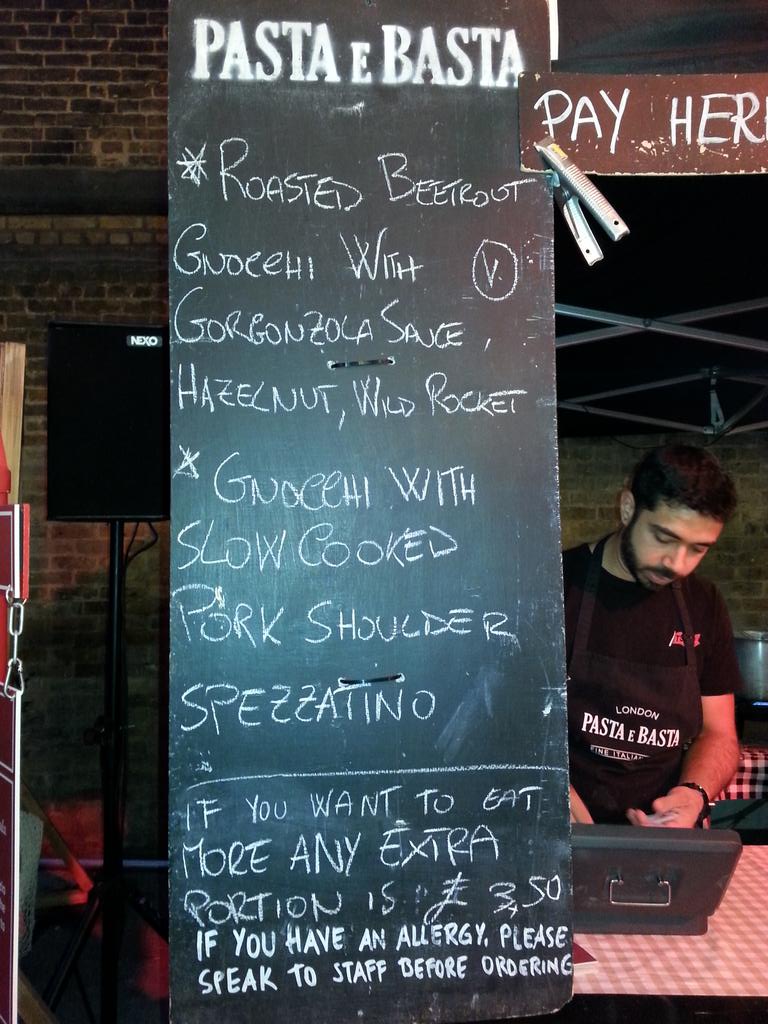 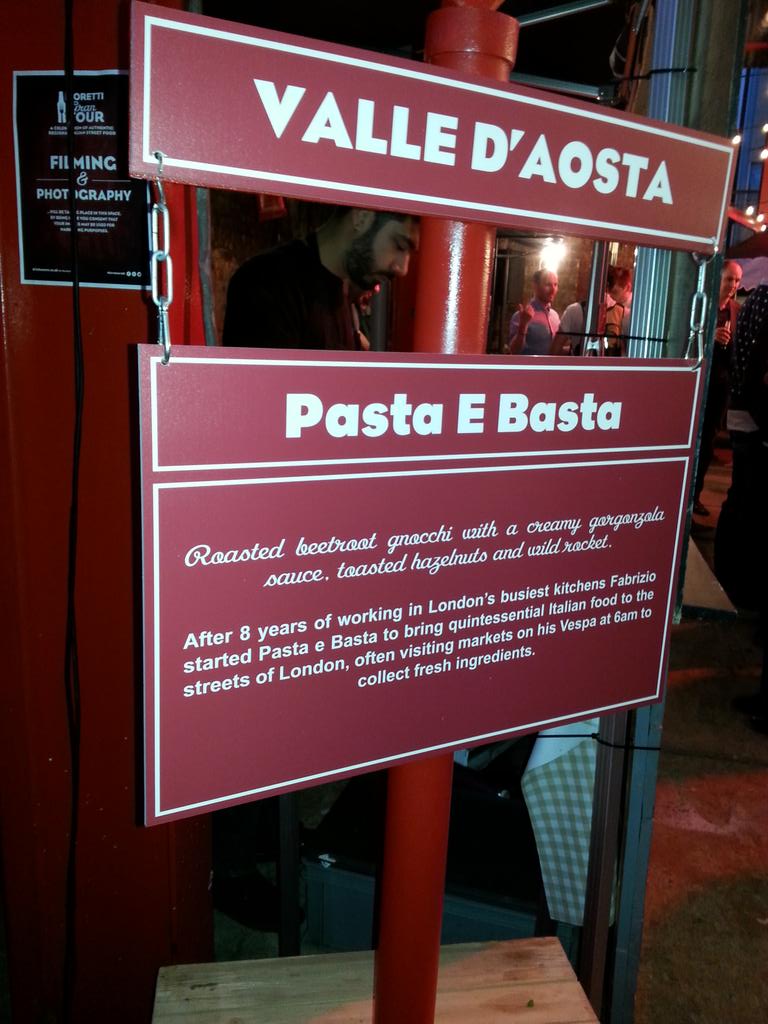 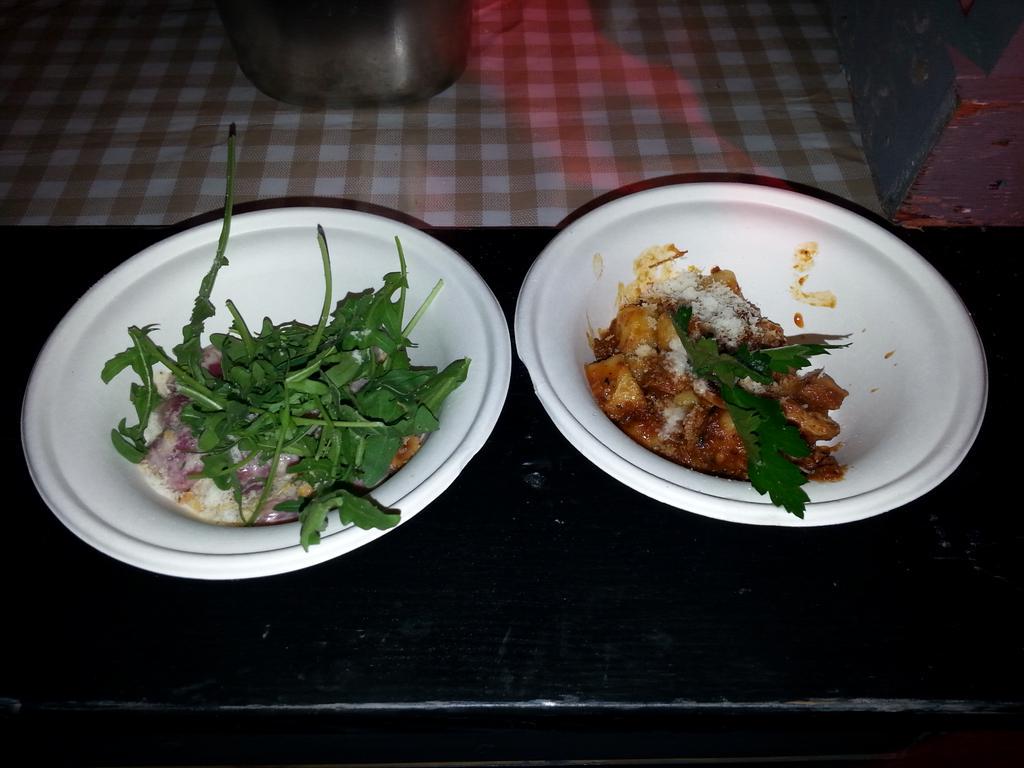 Next we tucked into a Paletta Romana pizza with peppery pork sausage from Edoardo and Michele Mortani at Arancina – showcasing the Lazio region: 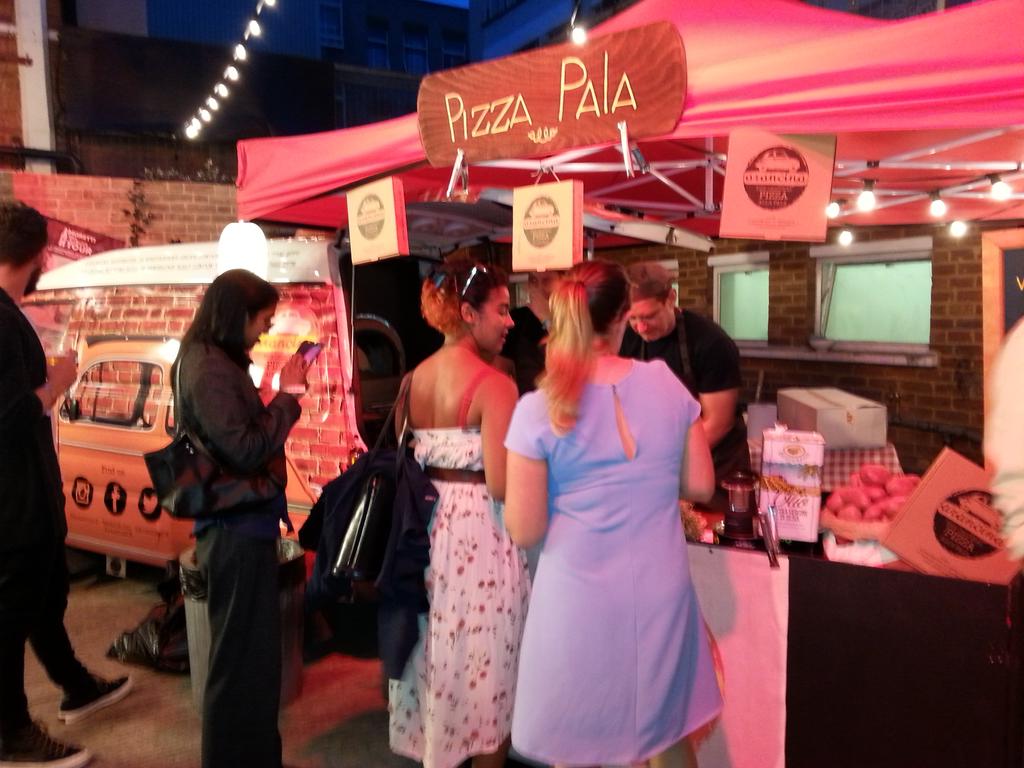 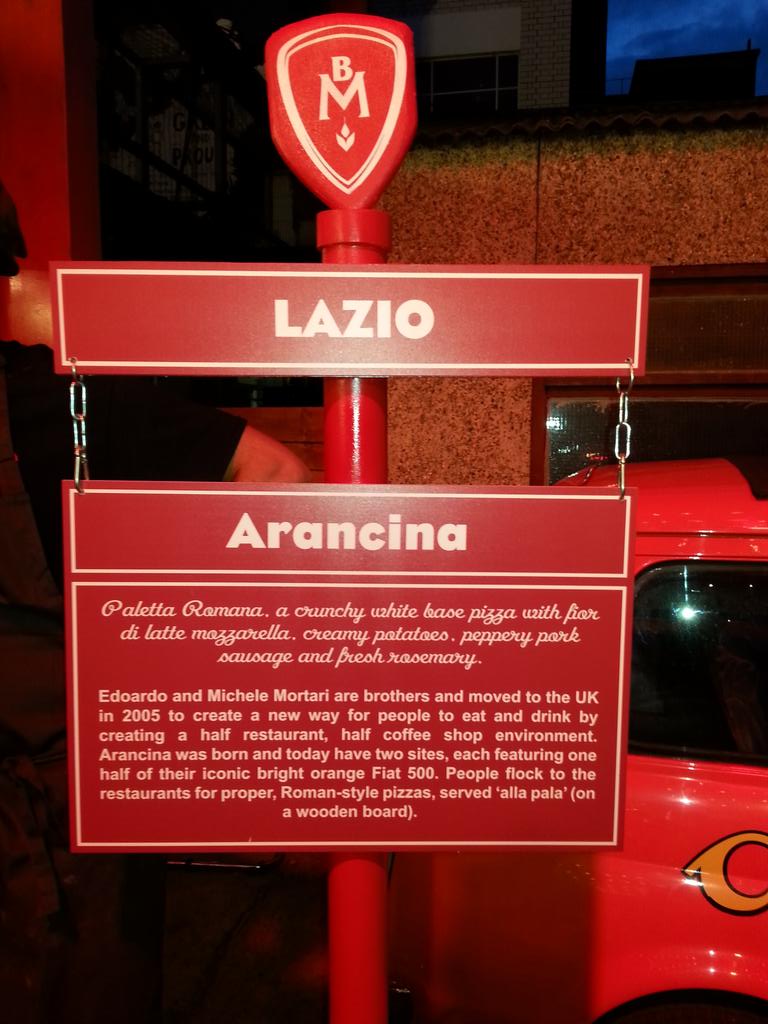 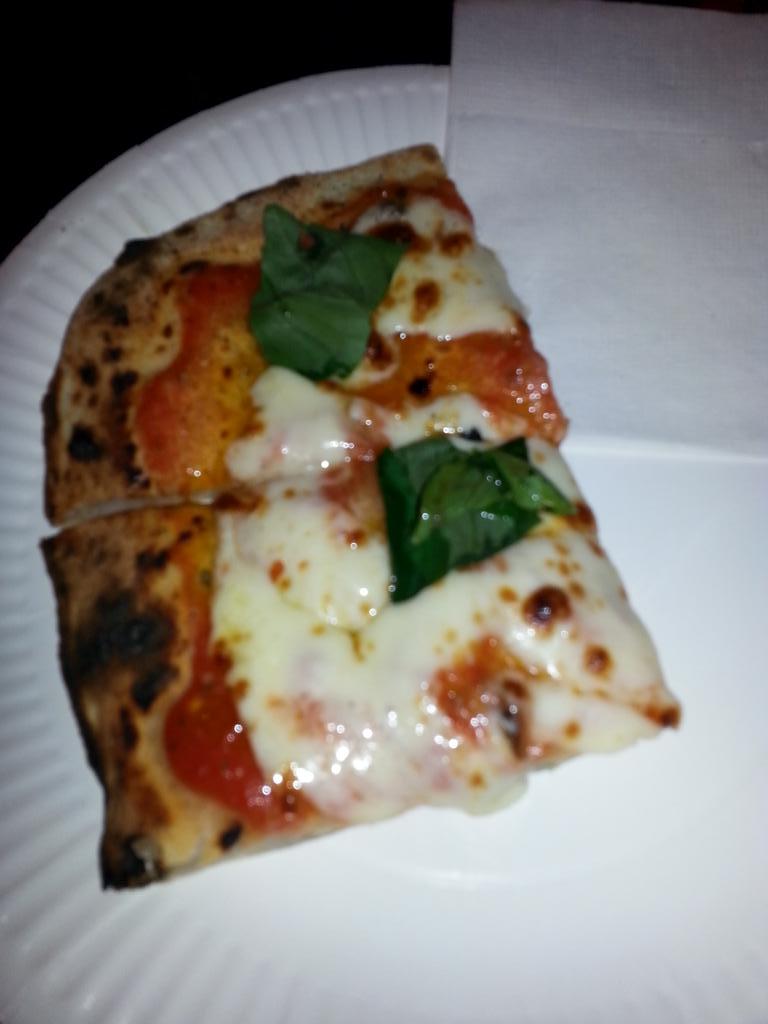 We moved onto Sicilian fried risotto balls from the friendly Melbourne born Arancini Brothers – showcasing Sicilia. They brought back happy memories of our trip to Taormina and Palermo! 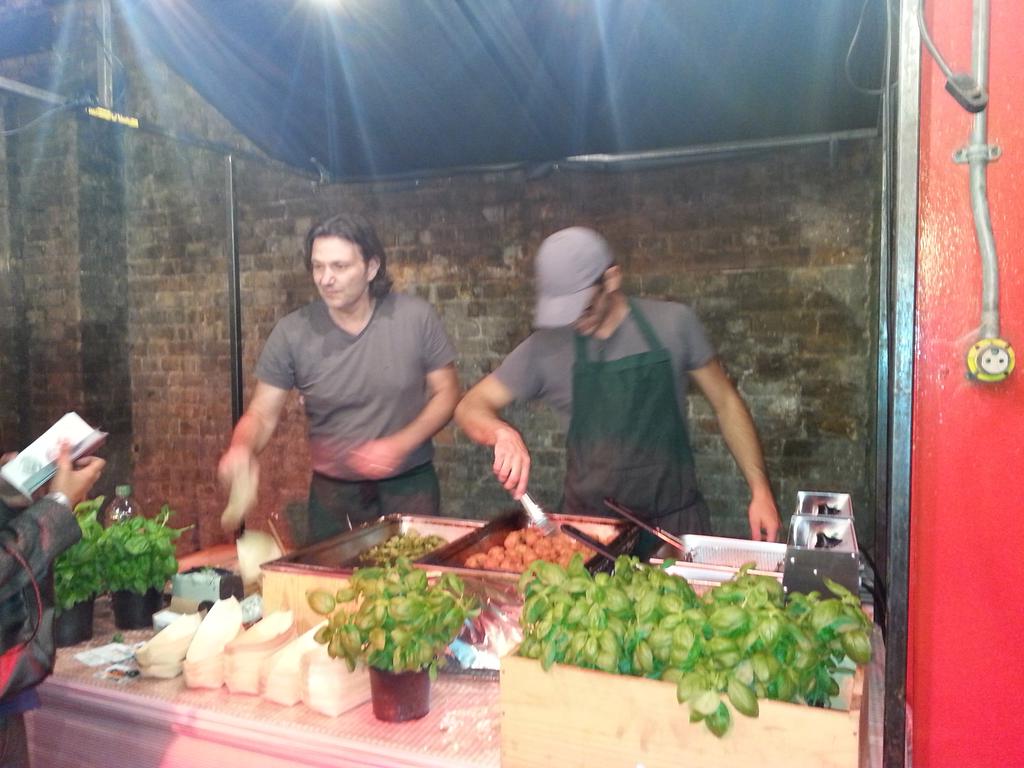 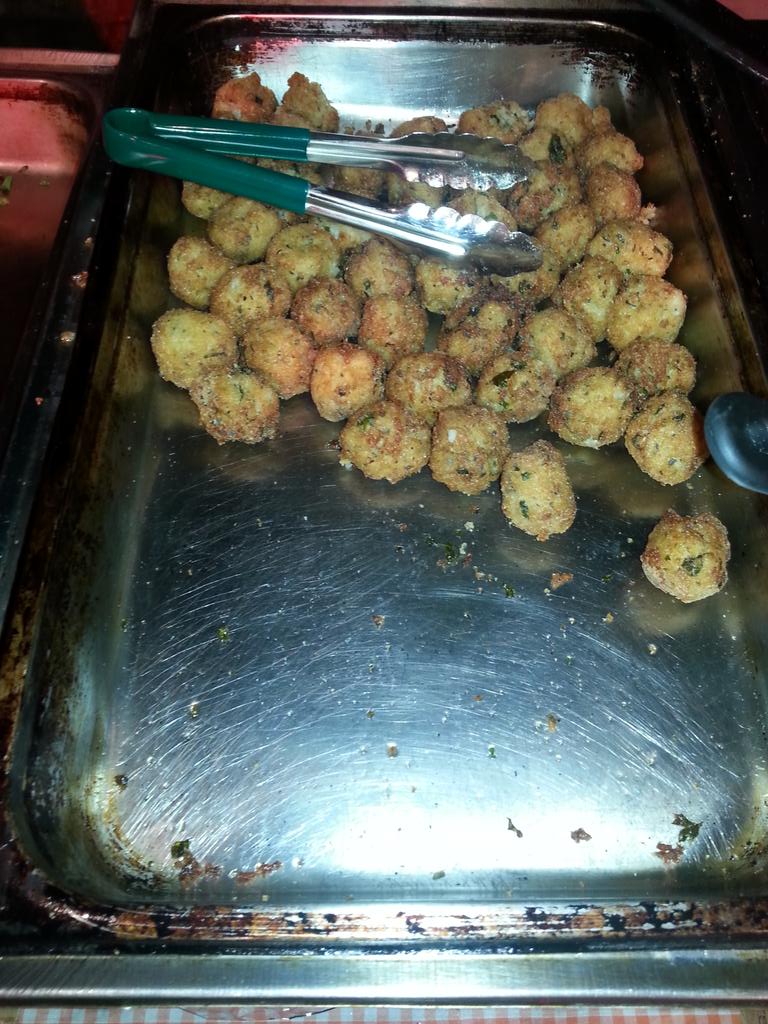 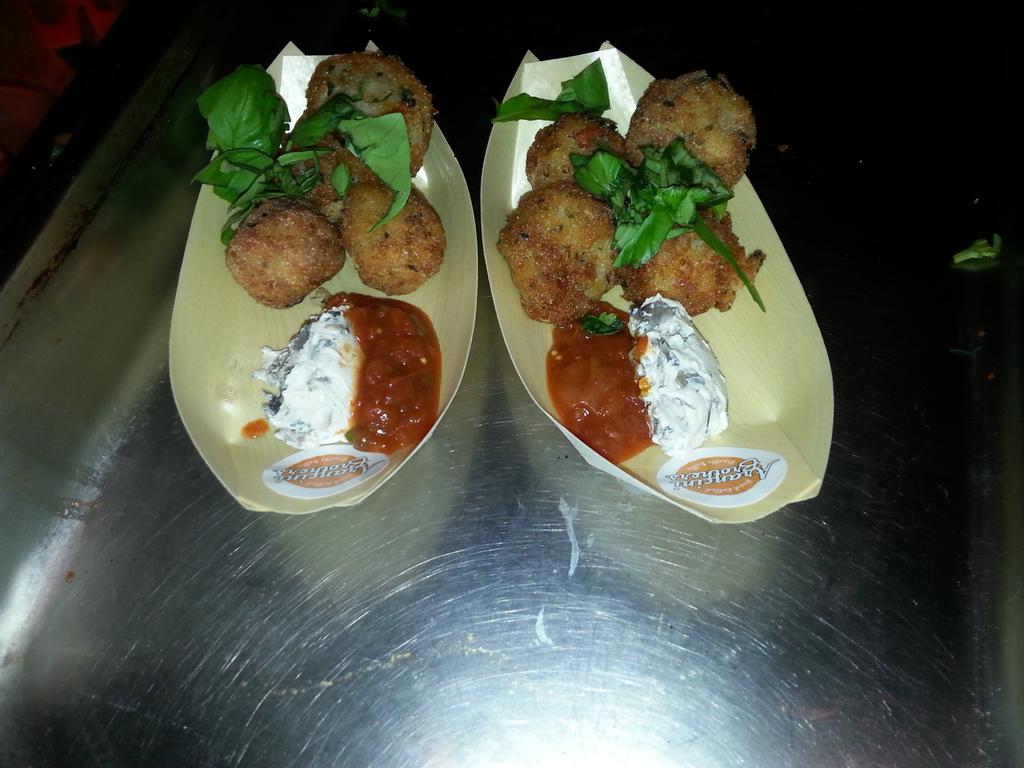 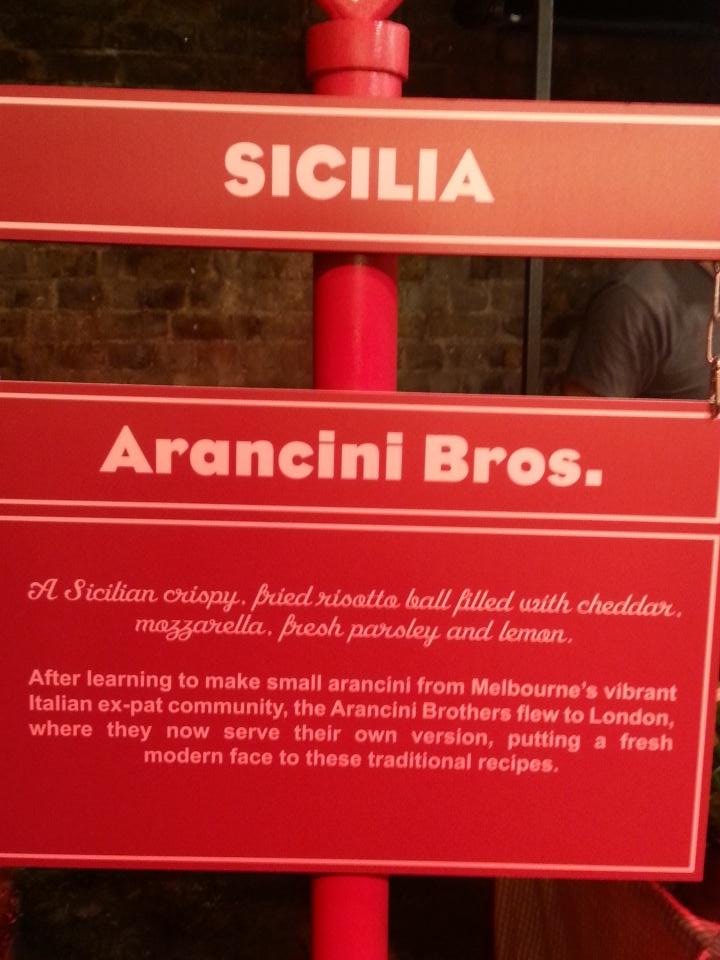 Next was a Torta Fritta from pleasant Wop crew (showcasing the delights of the Emilia Romagna region) – crispy fried dough served with guanciale, parmesan cheese and balsamic vinegar. Though we found this one slightly too salty from both the meat and cheese for our tastes : 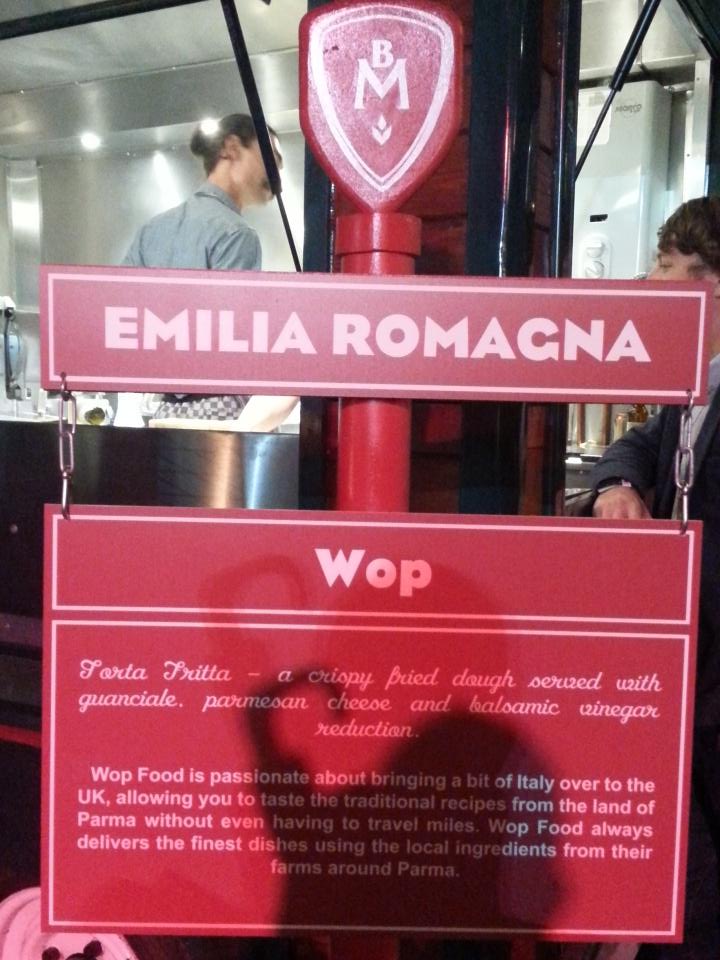 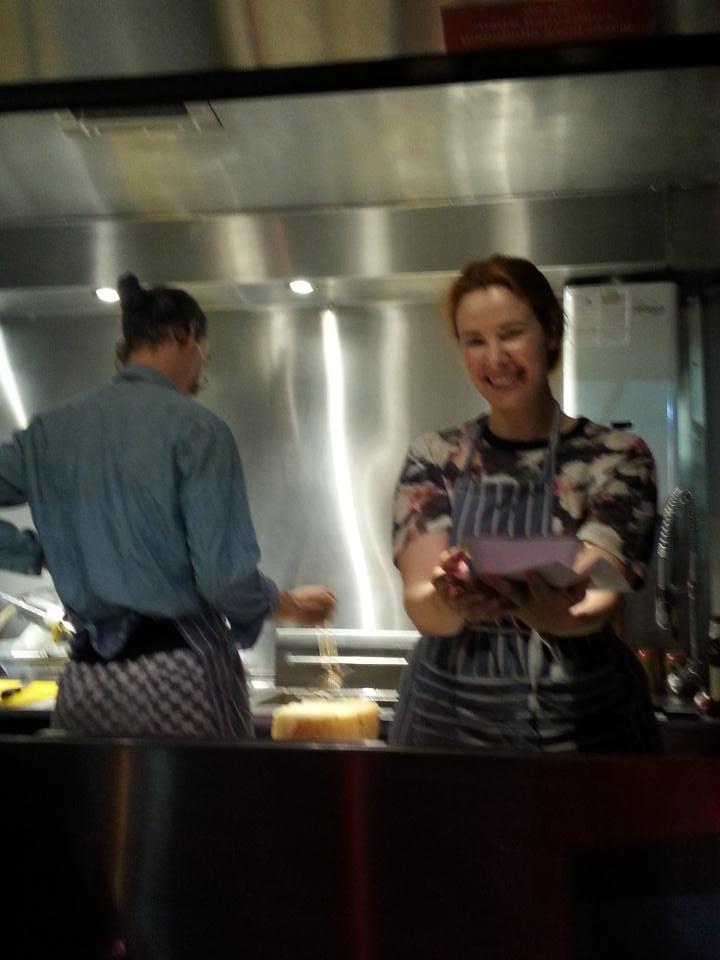 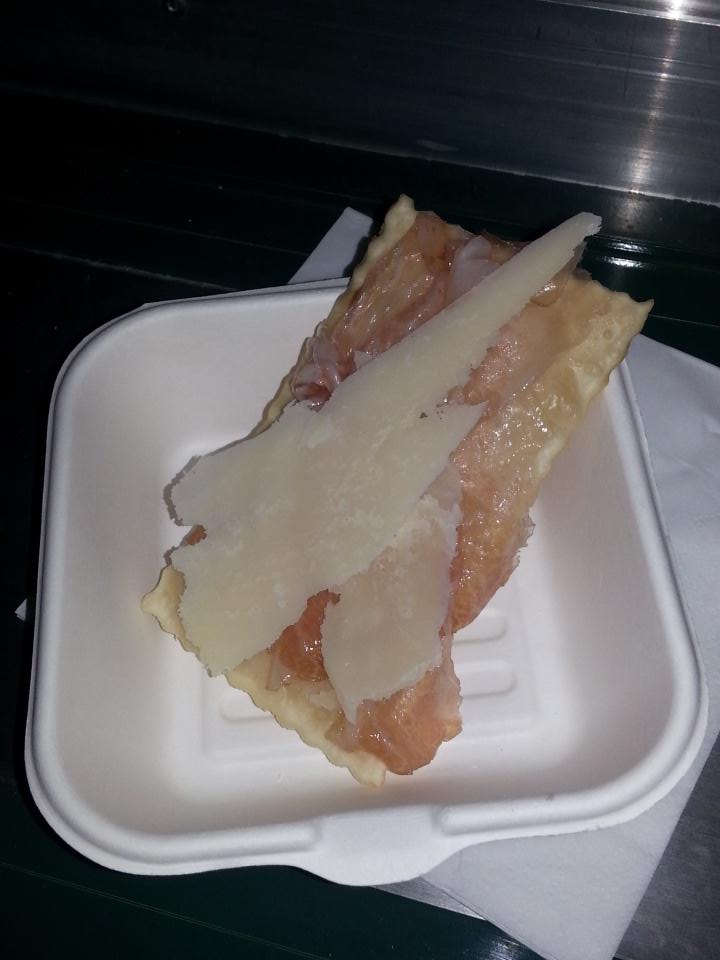 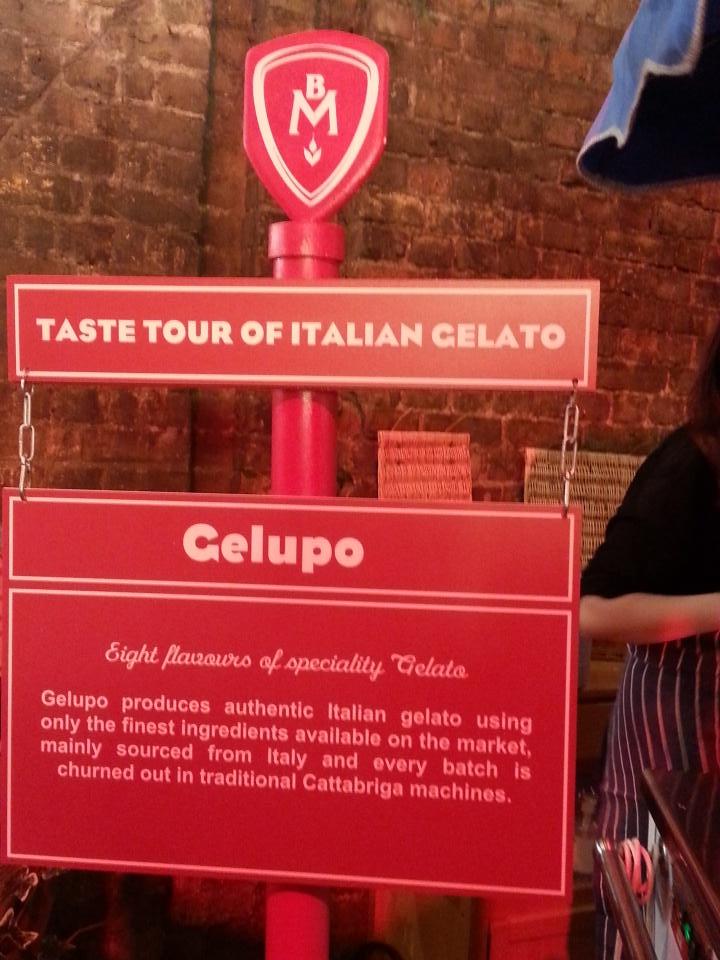 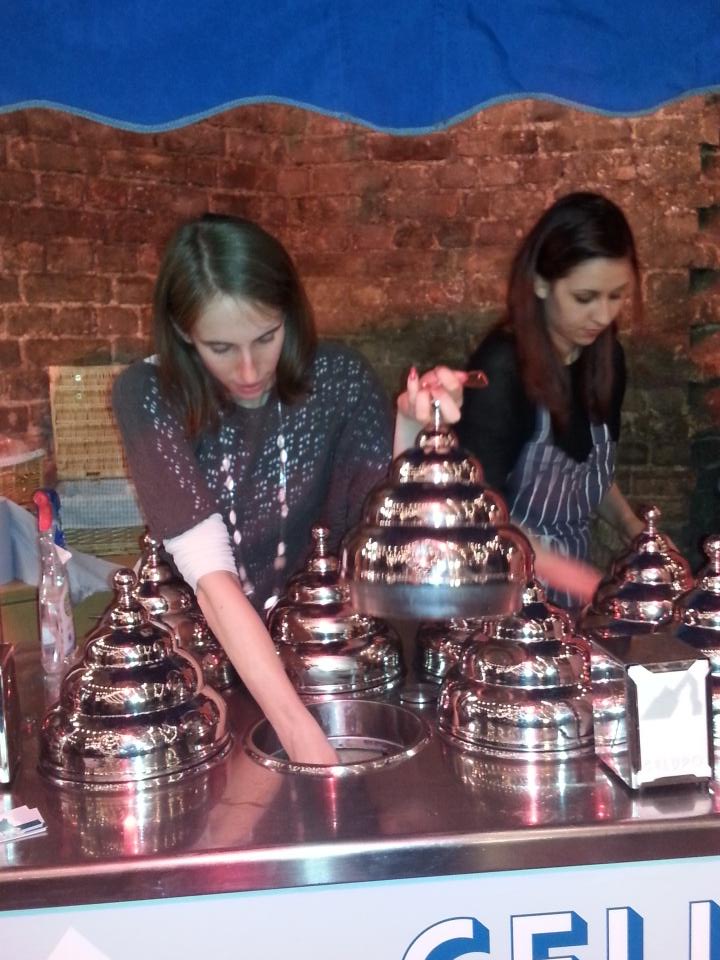 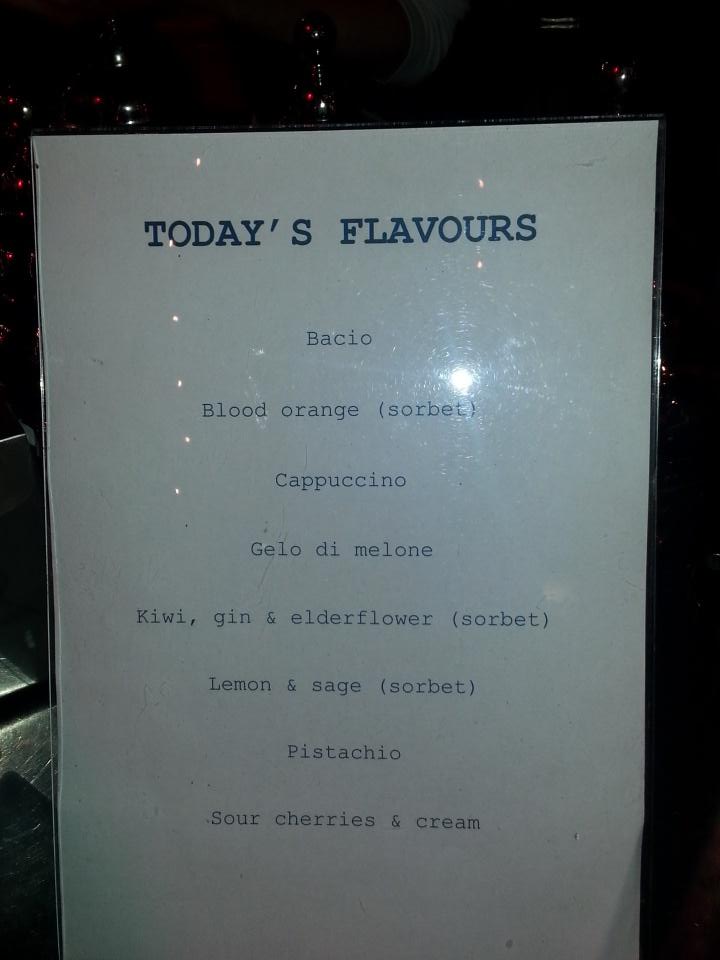 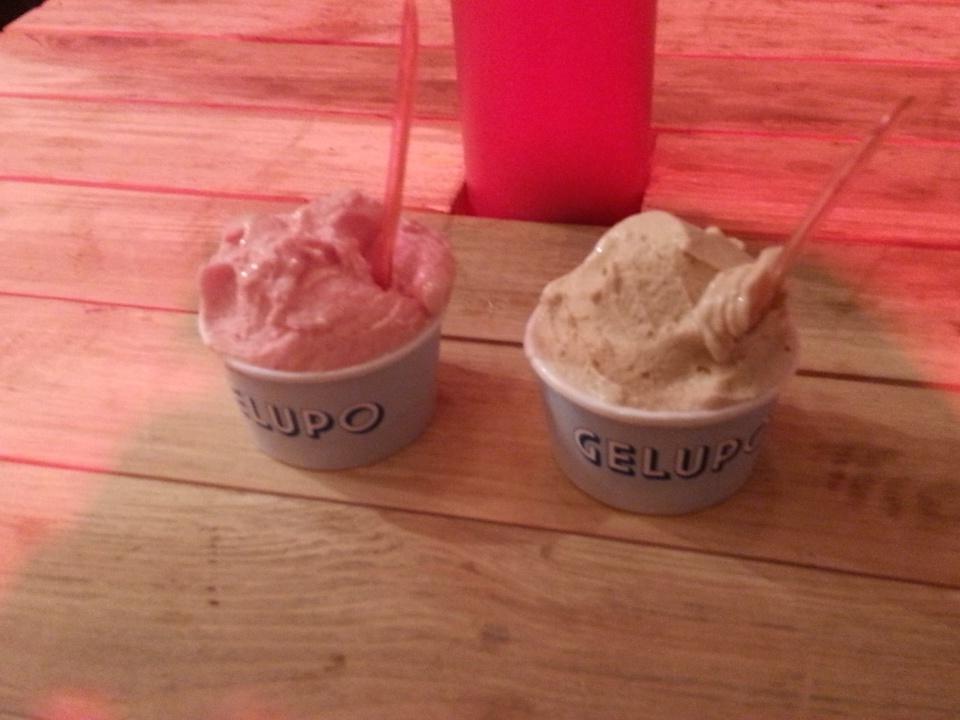 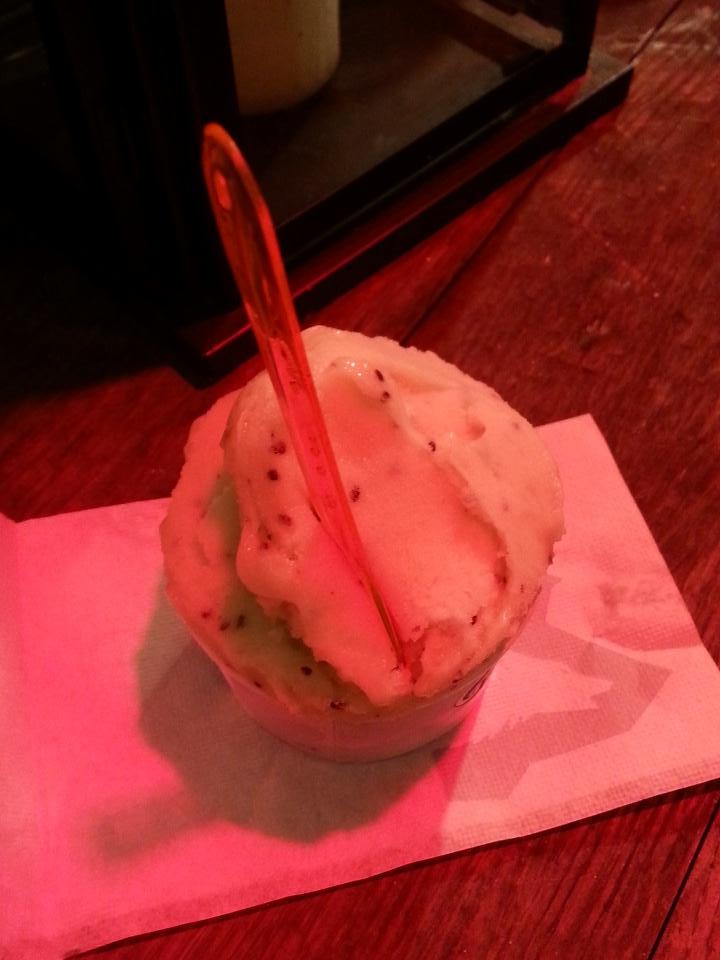 Saving this one to continue the happy vibes into the rest of this week! 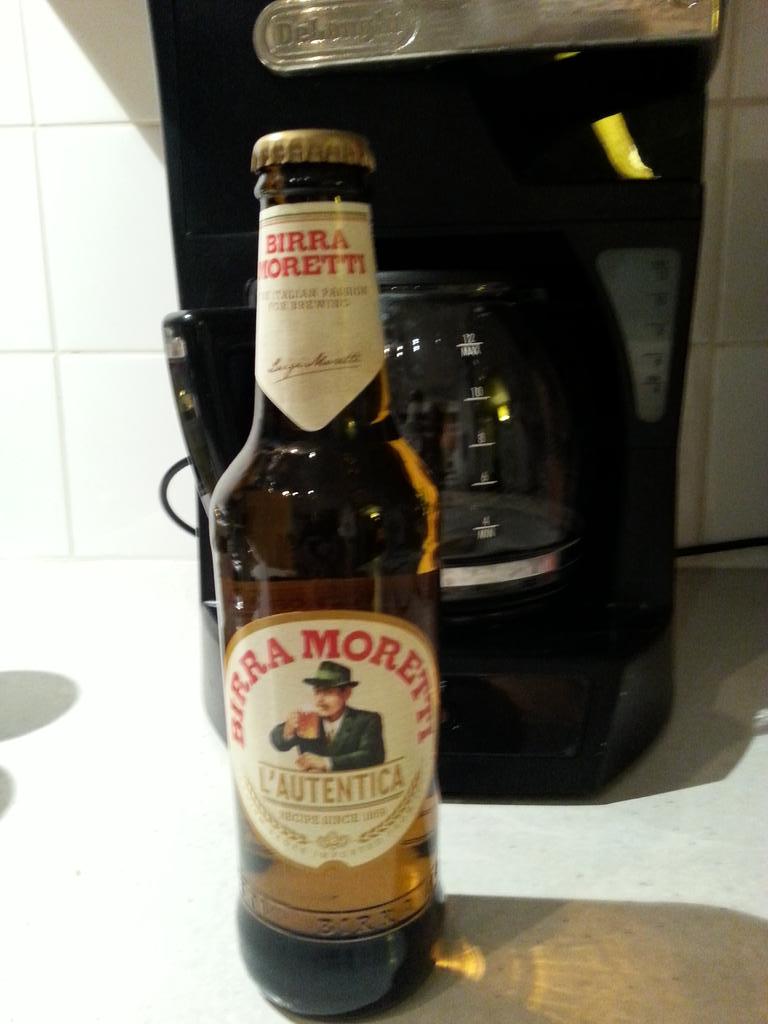 We would like to thank Lloyd at Cow PR for inviting us to the preview evening which enabled us to try most of the foodie delights on offer!

International food and travel blog by London based British Goan duo: Jason and Chiara Pinto. Twitter: @goantolondon @jasonpinto100 @chiarapinto About Goa: Goa is a small state on the western coast of India. Though the smallest Indian state, Goa has played an influential role in Indian history. Goa was one of the major trade centers in India, thus it had always been attracting the influential dynasties, seafarers, merchants, traders, monks and missionaries since its earliest known history. Throughout its history Goa has undergone continual transformation, leaving an indelible impression on various aspects of its cultural and socio-economic development. History of Goa: The East-West symbiosis of Goa makes it different from other parts of India, more than the historical and social niche. The history of Goa is a sweet and sour story of colonial heritage, oppressive rulers, a glorious culture, and uneventful immediate past. As a land with the identity of its own, Goa was brought into focus when it was liberated of Portugal from its oppressive rule of around 450 hundred years in 1961. Goa was captured and annexed to the Portuguese in 1510 following the urges of trade and demand of spices and also cottons and indigo. But, Goa has a history that starts much before Portugal even thought of Goa being where it is. Goa was coveted and ruled by a great number of Indian kingdoms and dynasties from the 4th century onwards. The first kingdom to rule Goa and Konkan were Bhojas, who were the feudatories of Ashoka in 4th and 5th centuries AD. The city of Chandrapur (present Chandor) was founded by Prince Chandraditya, son of Chalukya King Pulakesin from 566 to 597 A.D. after this, Goa was ruled consecutively by Silahara Dynasty, Kadamba Danasty, and finally Hoysalas from 1022 to 1342 A.D. From the 14th century onwards, Goa became a great trading center on the west coast, especially in the vast trade of horses imported from the Middle East. This was the time for bigger empires to move in and Vijayanagar Empire conquered it in 1344. But there empire was not going to last too long and in 1347, Bahmani Sultans defeated Vijayanagara forces in 1347 and controlled Goa. Afterwards, it was a time of great prosperity and peace for Gpa, especially during the rules of Yusuf Adil Shah and Ismail Adil Shah. They created beautiful houses, fortified Goa, and encouraged local craftsmen. Their liberal and progressive rule was not going to last too long and situation changed in 1510 A.D. Goa for all purposes was not on the Portuguese Radar even after a long time of their presence in India. When the Portuguese nobleman Alfonso de Albuquerque and his cousin Francisco de Albuquerque were sent with a powerful fleet in 1503 on the orders of King Dom Manuel I, the purpose was to defend the cargoes of spices, mostly pepper, against Arab Muslim raiders. The center of spice trade was Calicut at that time and Portuguese had built forts in Cochin and Cannanore. It was in 1506-08 that an opportunistic pirate, Timoja, persuaded Albuquerque to attack Goa and acquire a better land base. This made Goa, Portugal's first real territorial acquisition in Asia. After a brief period of recapturing by the Muslims, Goa Albuquerque finally captured Goa in 1510. The inquisition of Goa in 1540 reversed the previous liberal policy of Albuquerque and imposed strict censorship of literature and new laws to forbade non-Christians from professions. Forced conversions took place continuously, censorship was established on literature, the temples were destroyed, and non-Christian priests, holy men, and teachers were evicted. This led to continuous fleeing of Hindus from Goa to other parts of India. It is not that the relationship with Portugal brought only destruction for the Goans. Portuguese also built great churches like the church of St. Cajetan and Bom Jesus basilica in Old Goa, which is a pilgrimage site for the Christians from around the world. But it is also true that pre-1961; Goa was a highly impoverished region very backward and primitive. It is after the liberation that Goa of today has emerged and it has surprised even the locals many of whom had left their homeland before its liberation. Portugal and India are today friends and Goa continues to be a fascinating blend of Latin and Oriental. Information sourced from: http://www.royalorienttrain.com/goa/goa-history.html
View all posts by goantolondon →
This entry was posted in Birra Moretti, England, Hackney, Hackney, Italian, London, London 2015, Mare Street, Moretti Grand Tour, This is Cow PR and tagged #MorettiGrandTour, #TasteofItaly, #VIP, @ArancinaUK, @AranciniBros, @CinCinUK, @forzawin, @GelupoGelato, @MorettiUK, @PastaeBastaLndn, @spacestudios, @thisiscow, @wop_food, Arancina, beer, Birra Moretti, Cooking Cooks, drink, food, Forza Win, Gelupo, hackney, hospitality, italian, Italian street food, Leeds, live music, London, Mare Street, Moretti Grand Tour, Paste E Basta, PR, Space Studios, The Arancini Brothers, The Courtyard, This Is Cow PR, UK, Wop. Bookmark the permalink.