We were invited to dinner hosted by Loire Valley wines and Square Meal at Portland 113. We were really interested to explore the range of wines on offer and hoped they would bring back happy memories of our holidays in the Loire. London may be short on chauteaux but a few sips of the Domaine Bellevue Sauvignon Blanc Touraine (£10.99) transported me to sunnier climes! This wine was really refreshing, its crisp acidity made my mouth water for what was to come. And what came was a stunning selection of starters. 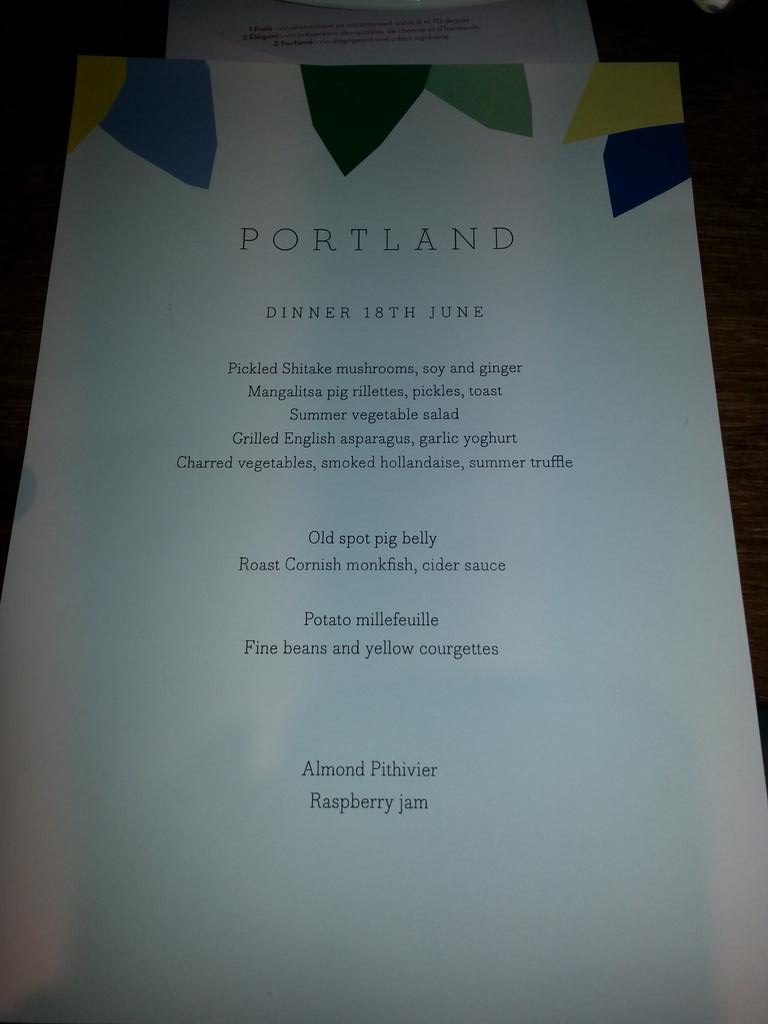 On reading the menu, as a committed carnivore, I was expecting to love the Mangalitsa pig rillettes. And I did, the Mangalitsa is a heritage breed of pig that has been compared to Kobe beef, it has a real depth of flavour thanks to the lovely fatty meat. Velvety smooth rillettes spread onto crunchy toast paired with sharp pickles to cut through the richness. 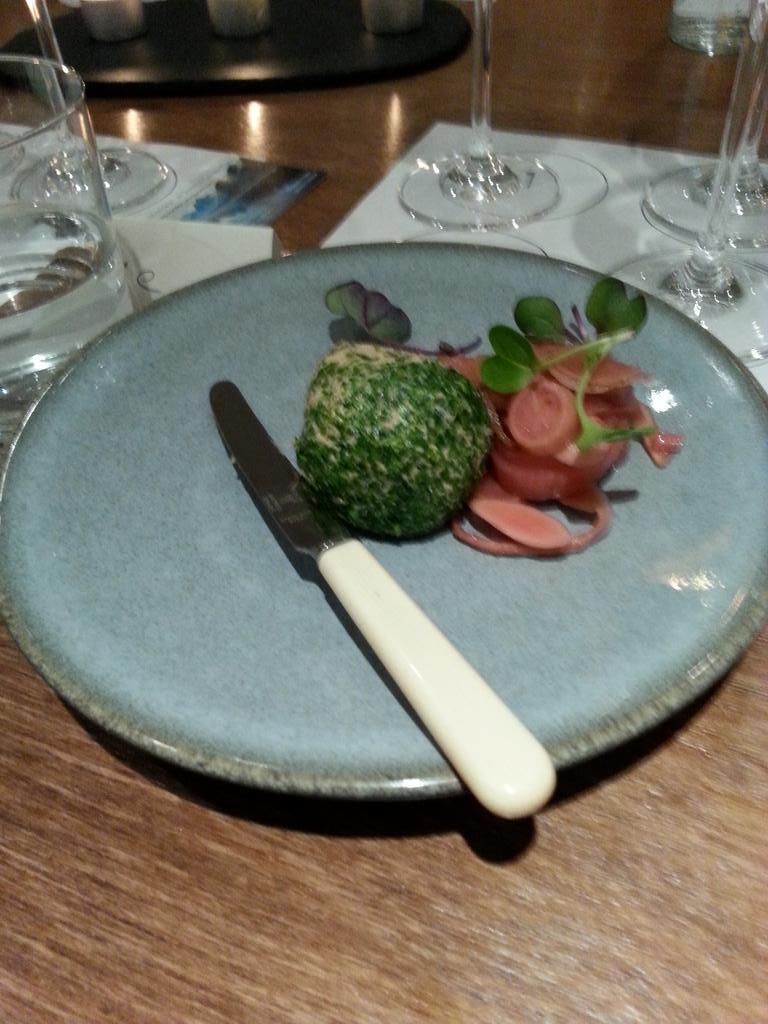 An intriguing textured dish of pickled Shitake mushrooms with soy and ginger followed: 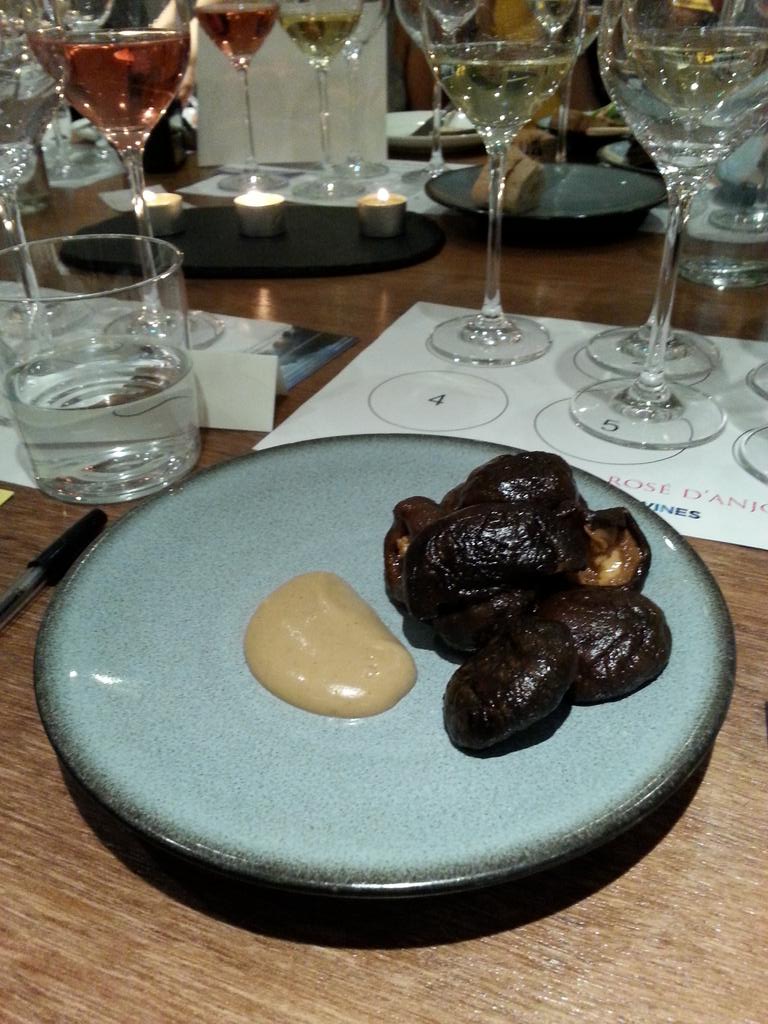 But the starters that really wowed me were the veggie ones, I adored the charred vegetables with smoked hollandaise and summer truffle. This was paired with Domaine de l’Aumonier, Touraine Sauvignon (£9.95), the grassy and citrus notes really enhanced the smoky char. 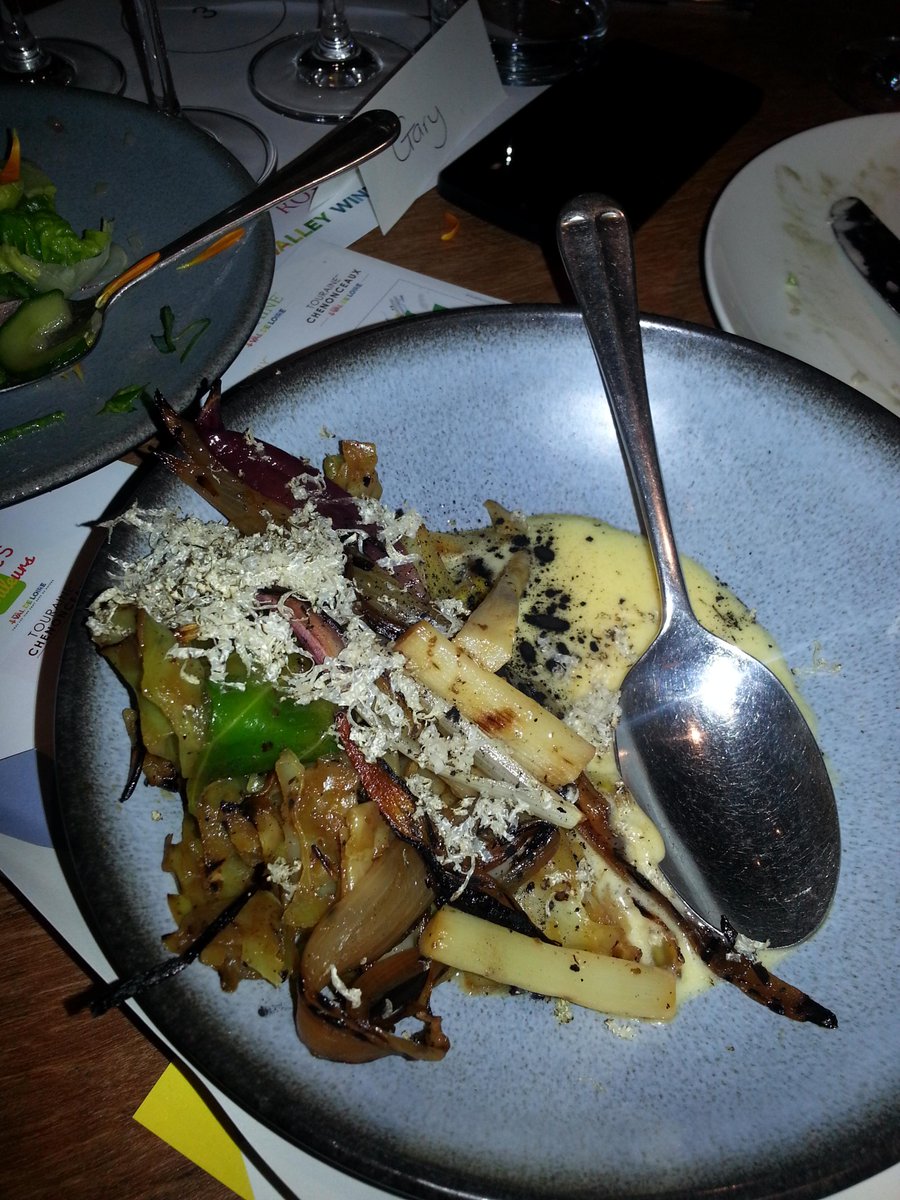 This was followed by a beautiful summer salad, as pretty as a picture with edible flowers, matched with a Rose d’Anjou Domaine Des Essarts (£8.50), slightly sweet but again with enough acidity to keep things refreshing and (dangerously!) drinkable. Grilled English asparagus had enough heft to stand up to the punch of garlic yoghurt. 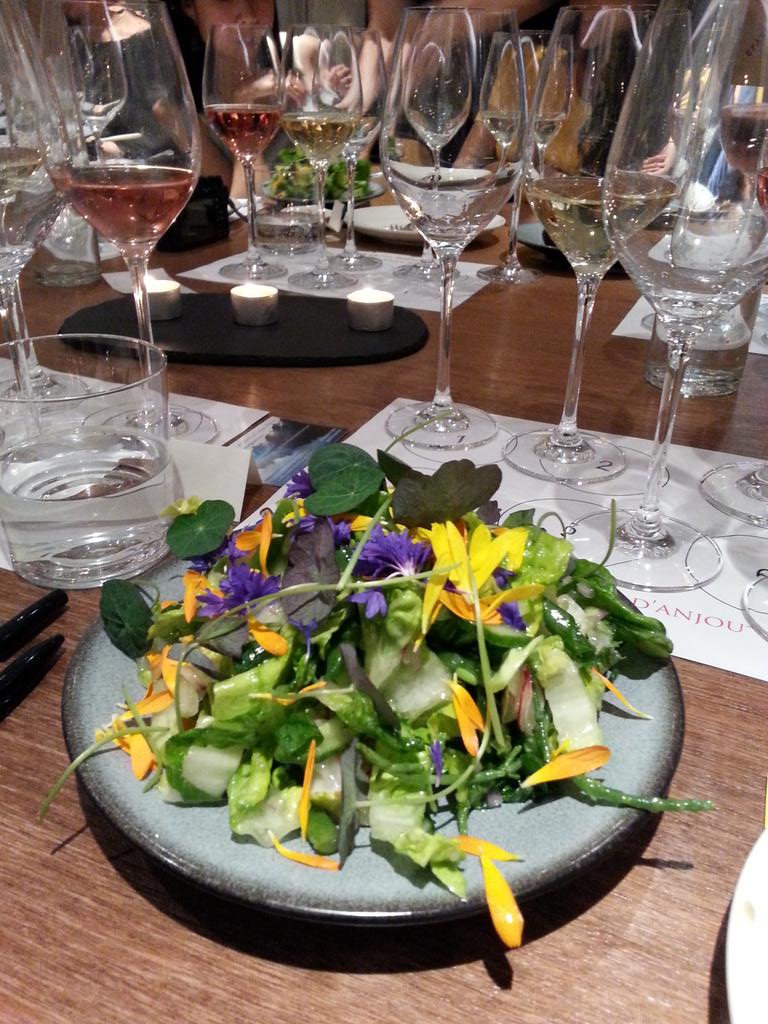 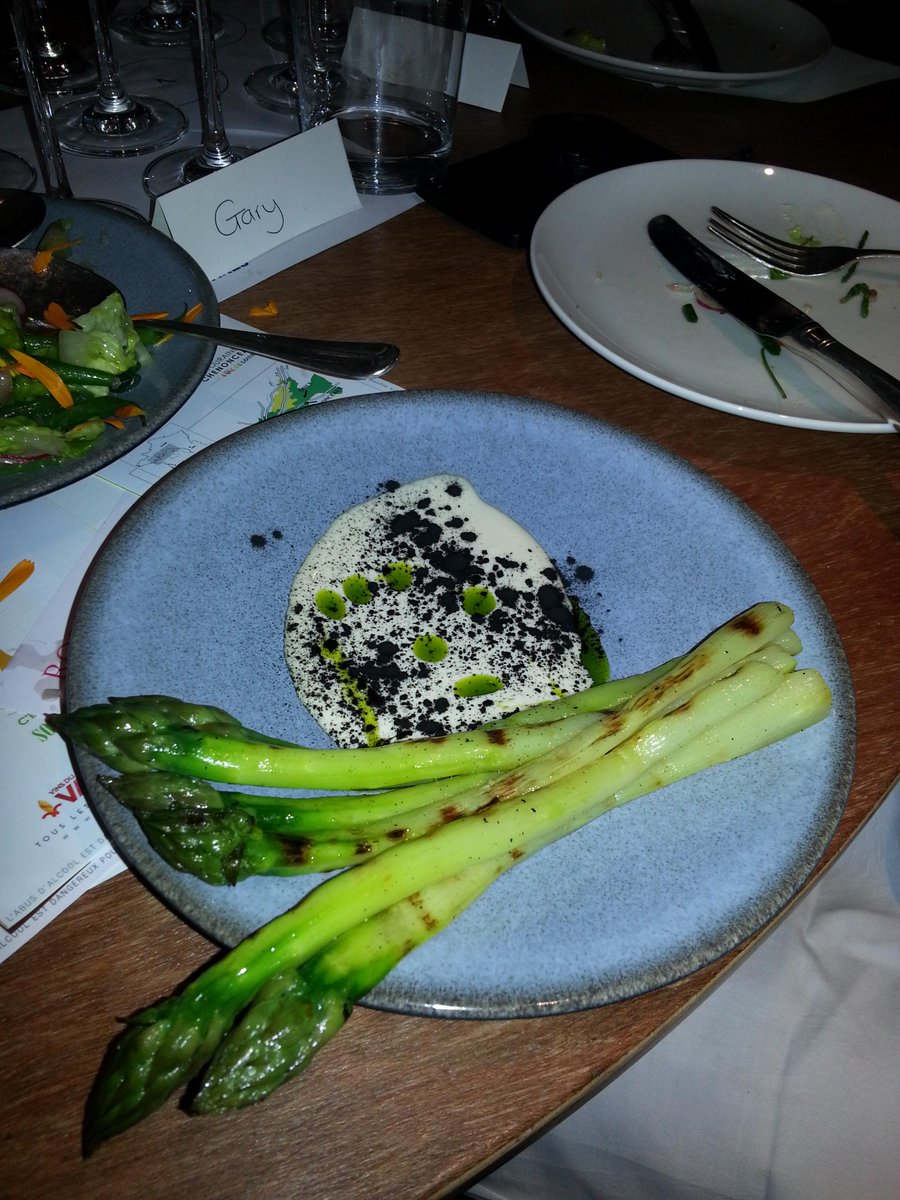 We then moved on to main courses of Old Spot pig belly with a fine layer of fat (mmn tasty, tasty fat!) accompanied by a potato millefeuille. I don’t even want to think about what was done to that potato to achieve the myriad, crispy layers of deliciousness but I’m going to pretend it didn’t also involve copious amounts of fat and in my blissful ignorance chalk it up as one of my five a day. Potatoes are a vegetable right?! Plus actual veggies of fine beans and yellow courgettes. 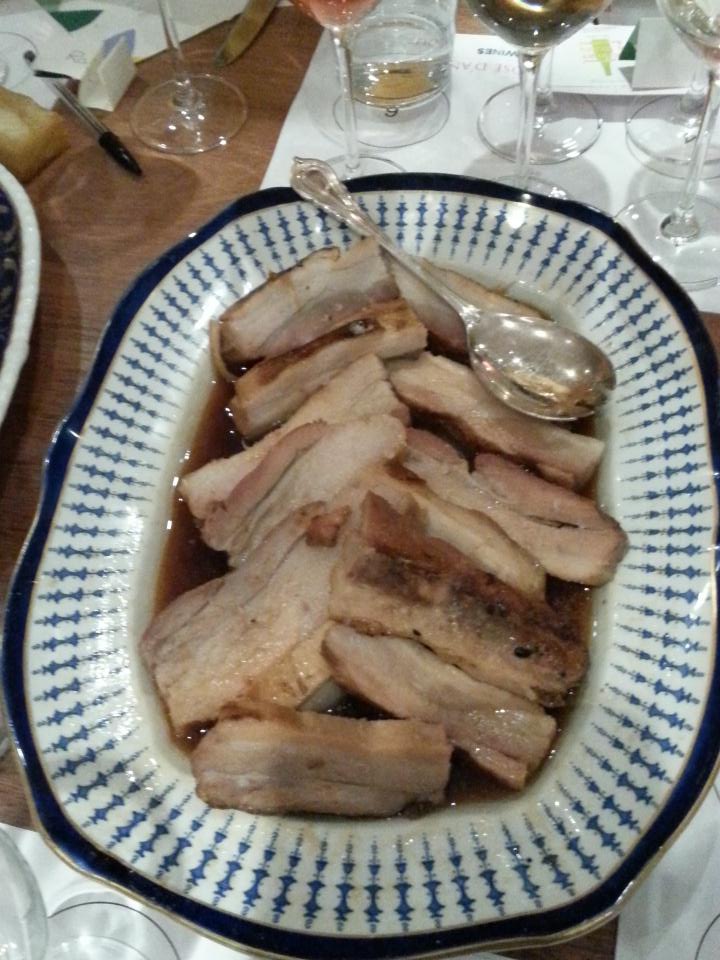 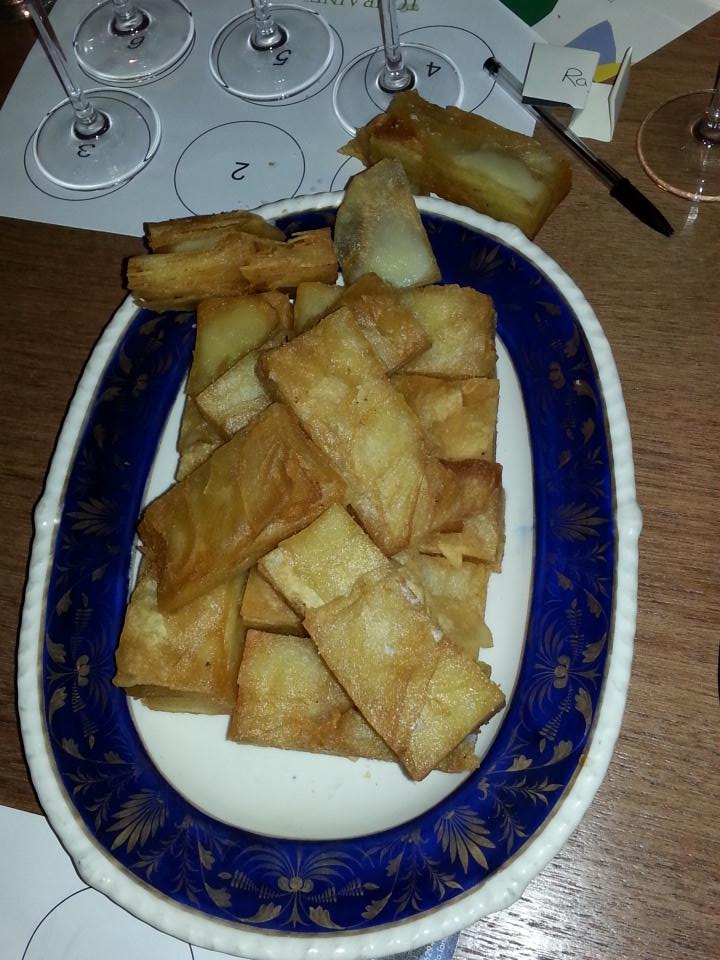 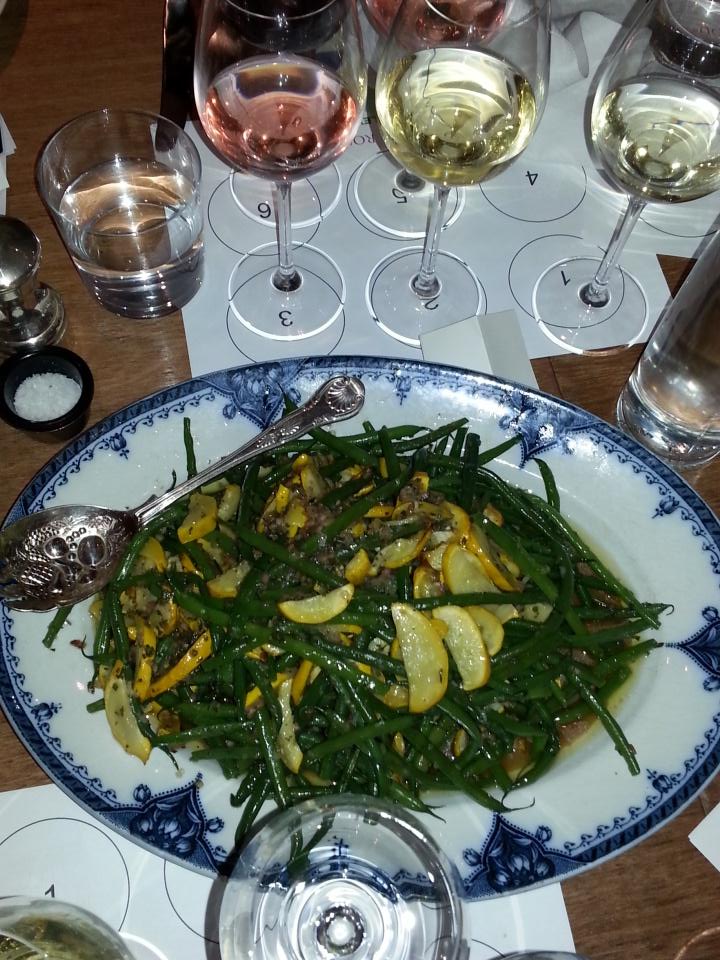 The other main of Cornish Monkfish had an interesting cider sauce which J enjoyed as he loves to get ideas for fish dishes when we dine out: 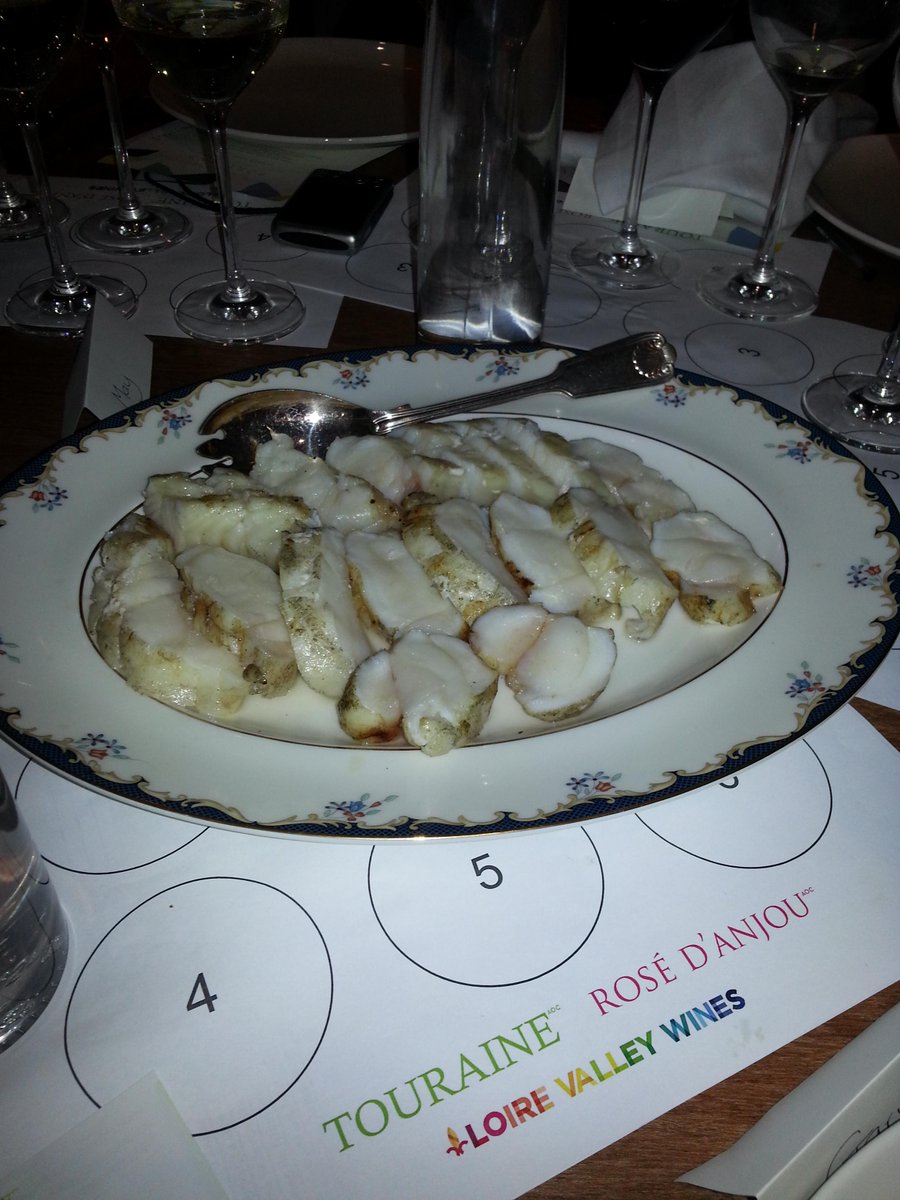 We rounded things off with an almond pithivier with lashings of raspberry jam and cream fraiche paired perfectly with the red fruit flavours of the Rose D’Anjou, La Jaglerie (£7.99). 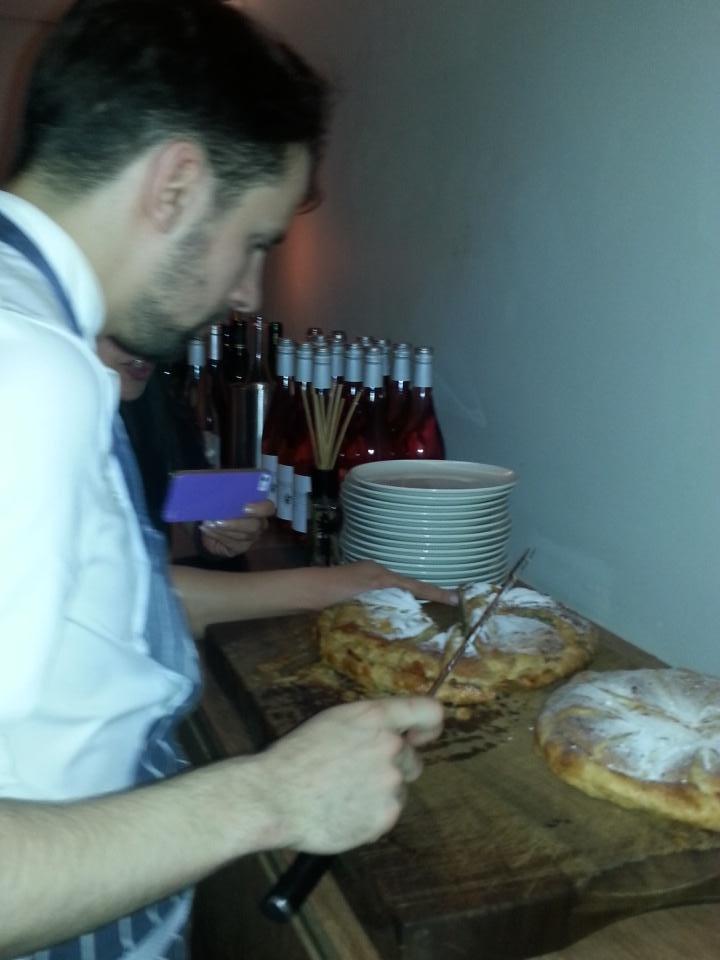 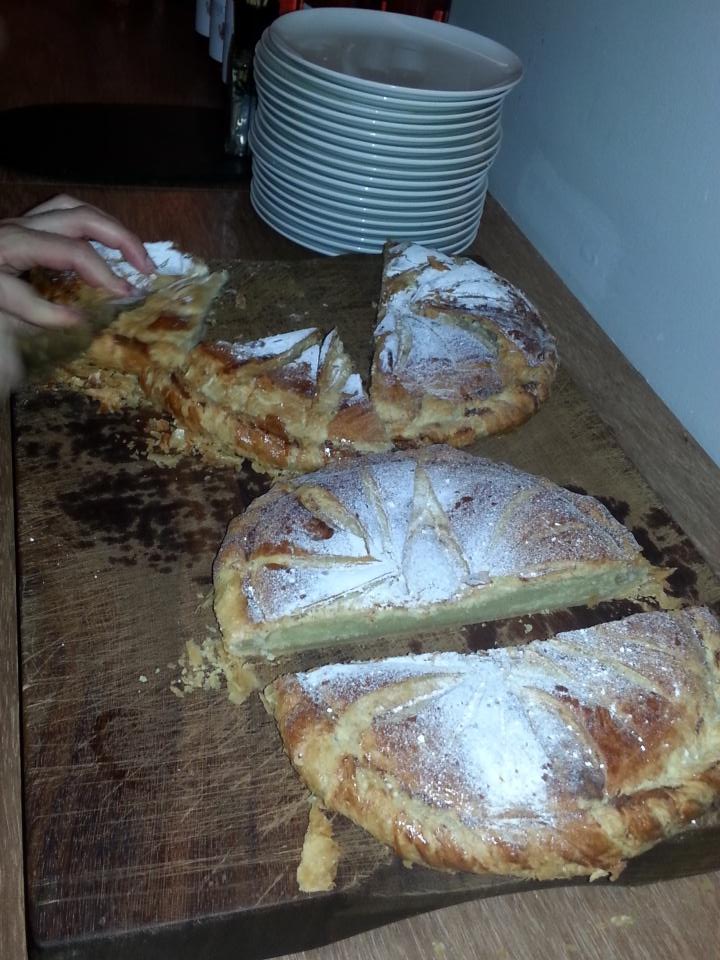 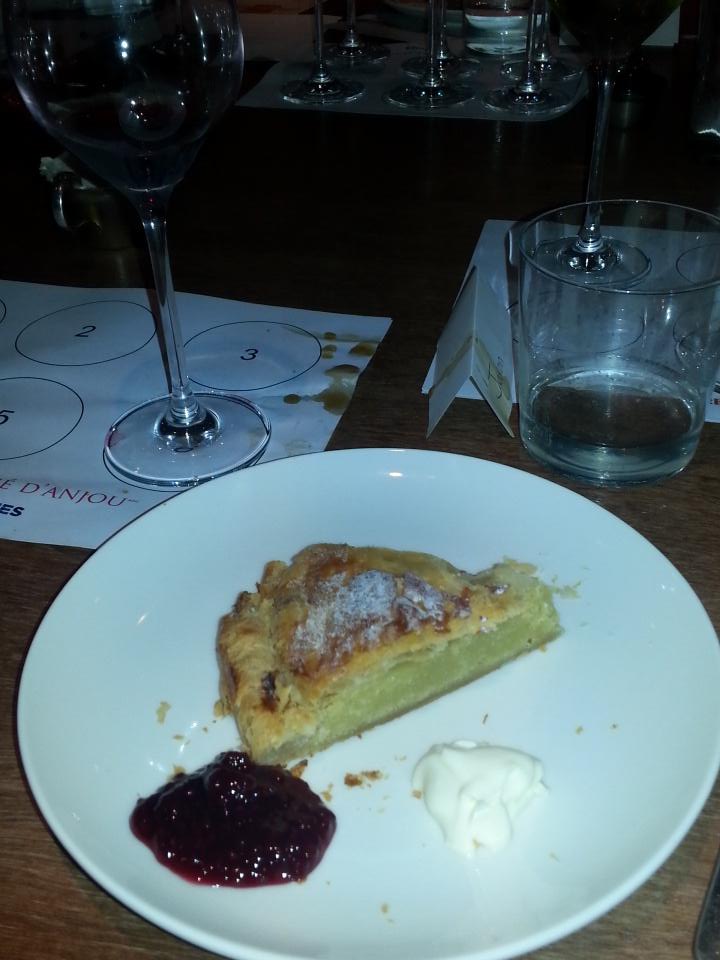 I floated home on a cloud of amazing food with a new found affection for the wines of the Loire, especially the Sauvignon Blanc Touraine which I can see myself sipping in the garden of my own chauteaux on the (hopefully!) many sunny afternoons to come.

International food and travel blog by London based British Goan duo: Jason and Chiara Pinto. Twitter: @goantolondon @jasonpinto100 @chiarapinto About Goa: Goa is a small state on the western coast of India. Though the smallest Indian state, Goa has played an influential role in Indian history. Goa was one of the major trade centers in India, thus it had always been attracting the influential dynasties, seafarers, merchants, traders, monks and missionaries since its earliest known history. Throughout its history Goa has undergone continual transformation, leaving an indelible impression on various aspects of its cultural and socio-economic development. History of Goa: The East-West symbiosis of Goa makes it different from other parts of India, more than the historical and social niche. The history of Goa is a sweet and sour story of colonial heritage, oppressive rulers, a glorious culture, and uneventful immediate past. As a land with the identity of its own, Goa was brought into focus when it was liberated of Portugal from its oppressive rule of around 450 hundred years in 1961. Goa was captured and annexed to the Portuguese in 1510 following the urges of trade and demand of spices and also cottons and indigo. But, Goa has a history that starts much before Portugal even thought of Goa being where it is. Goa was coveted and ruled by a great number of Indian kingdoms and dynasties from the 4th century onwards. The first kingdom to rule Goa and Konkan were Bhojas, who were the feudatories of Ashoka in 4th and 5th centuries AD. The city of Chandrapur (present Chandor) was founded by Prince Chandraditya, son of Chalukya King Pulakesin from 566 to 597 A.D. after this, Goa was ruled consecutively by Silahara Dynasty, Kadamba Danasty, and finally Hoysalas from 1022 to 1342 A.D. From the 14th century onwards, Goa became a great trading center on the west coast, especially in the vast trade of horses imported from the Middle East. This was the time for bigger empires to move in and Vijayanagar Empire conquered it in 1344. But there empire was not going to last too long and in 1347, Bahmani Sultans defeated Vijayanagara forces in 1347 and controlled Goa. Afterwards, it was a time of great prosperity and peace for Gpa, especially during the rules of Yusuf Adil Shah and Ismail Adil Shah. They created beautiful houses, fortified Goa, and encouraged local craftsmen. Their liberal and progressive rule was not going to last too long and situation changed in 1510 A.D. Goa for all purposes was not on the Portuguese Radar even after a long time of their presence in India. When the Portuguese nobleman Alfonso de Albuquerque and his cousin Francisco de Albuquerque were sent with a powerful fleet in 1503 on the orders of King Dom Manuel I, the purpose was to defend the cargoes of spices, mostly pepper, against Arab Muslim raiders. The center of spice trade was Calicut at that time and Portuguese had built forts in Cochin and Cannanore. It was in 1506-08 that an opportunistic pirate, Timoja, persuaded Albuquerque to attack Goa and acquire a better land base. This made Goa, Portugal's first real territorial acquisition in Asia. After a brief period of recapturing by the Muslims, Goa Albuquerque finally captured Goa in 1510. The inquisition of Goa in 1540 reversed the previous liberal policy of Albuquerque and imposed strict censorship of literature and new laws to forbade non-Christians from professions. Forced conversions took place continuously, censorship was established on literature, the temples were destroyed, and non-Christian priests, holy men, and teachers were evicted. This led to continuous fleeing of Hindus from Goa to other parts of India. It is not that the relationship with Portugal brought only destruction for the Goans. Portuguese also built great churches like the church of St. Cajetan and Bom Jesus basilica in Old Goa, which is a pilgrimage site for the Christians from around the world. But it is also true that pre-1961; Goa was a highly impoverished region very backward and primitive. It is after the liberation that Goa of today has emerged and it has surprised even the locals many of whom had left their homeland before its liberation. Portugal and India are today friends and Goa continues to be a fascinating blend of Latin and Oriental. Information sourced from: http://www.royalorienttrain.com/goa/goa-history.html
View all posts by goantolondon →
This entry was posted in Bloomsbury, England, Fitzrovia, Food Blogger Dinners, Global inspirations, Great Portland Street, London, menus and prices, Modern British, Pork, Pork, Portland 113, seafood, Square Meal, Square Meal - blogger reviews, Square Meal PR, Style of cooking, use of modern ingredients and tagged #foodblogger, #LoireValleyWines, 113 Portland Street, @legslonglength, @portland113, @SopexaUK, @SquareMeal, almond pithivier, Bloomsbury, creme fraiche, dinner, Fitzrovia, Great Portland Street, Loire, Loire Valley, Loire Valley Wines, London, modern british, Portland 113, raspberry jam, Square Meal, wine matching, wines. Bookmark the permalink.