After a warm greeting from Ian and team, we settled down to dinner. As we did not know where to start, we decided to opt to be in the capable hands of Ian providing us with a chef’s selection of an array of their dishes. Whilst chatting to Ian, he explained that some of the items, like the Mantou buns for the Peking Duck, were inspired by his travels.

We kicked off with a Passion Fruit Kiss (£10) and Blooming Hibiscus (£12) cocktails – an appropriately decadent way to start Wednesday evening! Both were very pretty and bursting with colours, and their was even an open hibiscus flower at the bottom. The Passion Fruit Kiss was a wonderful balance of sweetness and sourness and contained one of our favourite spirits: cachaca, plus the Hibiscus’ Tanqueray Gin added a great citrus note with the added bonus of the sweet, edible hibiscus flower to consume at the end of the cocktail; a perfect way to complete a refreshing cocktail. 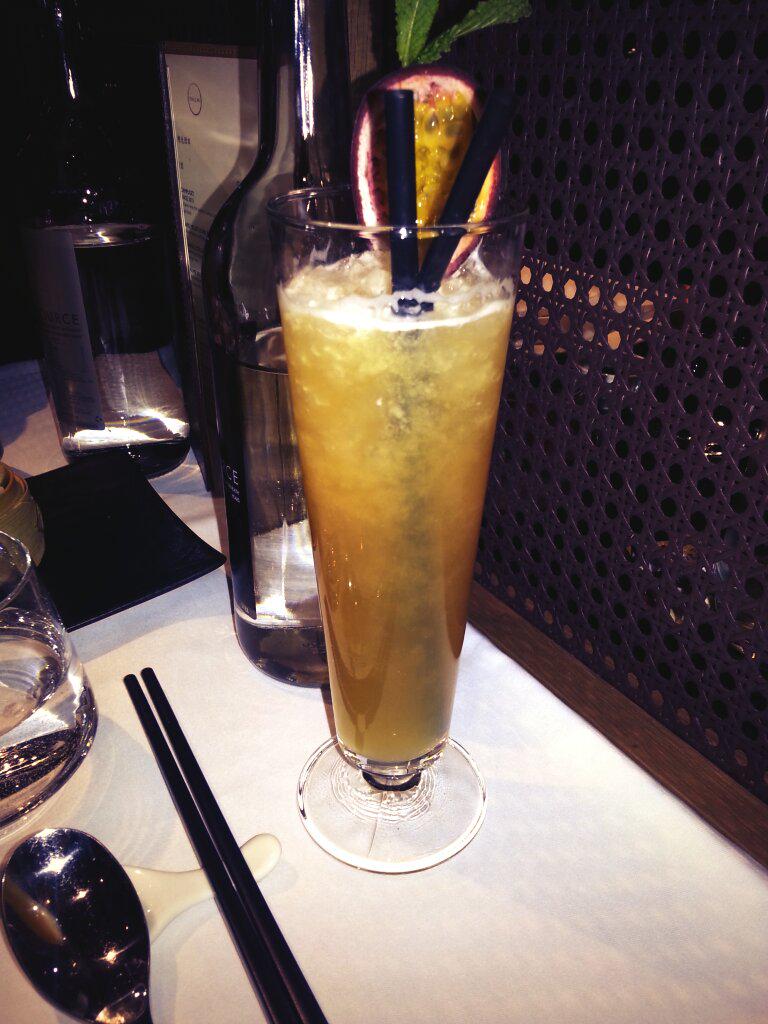 These were accompanied by delights of a gold topped dim sum platter selection (£32) of: vegetarian dumpling with goji berries, lobster dumpling topped with caviar, sea bass with gold leaf, prawn with truffle, seafood with truffle, and scallop with axo sauce; salt and pepper squid with red chillies and Szechuan peppercorns (£15); and Wagyu Puffs (£18) with black sesame seeds and gold leaf. The dim sum were velvety and brimming with colours and flavours, and we particularly loved the seafood with truffle and lobster with caviar dumplings. They reminded us of our enjoyable family trip through eastern China a few years ago. Also, the Wagyu Puffs were pillows of decadence and did justice to the Wagyu beef inside. However, the squid may have been slightly overcooked as it had gone a bit rubbery but loved the heat from the Szechuan peppercorns. 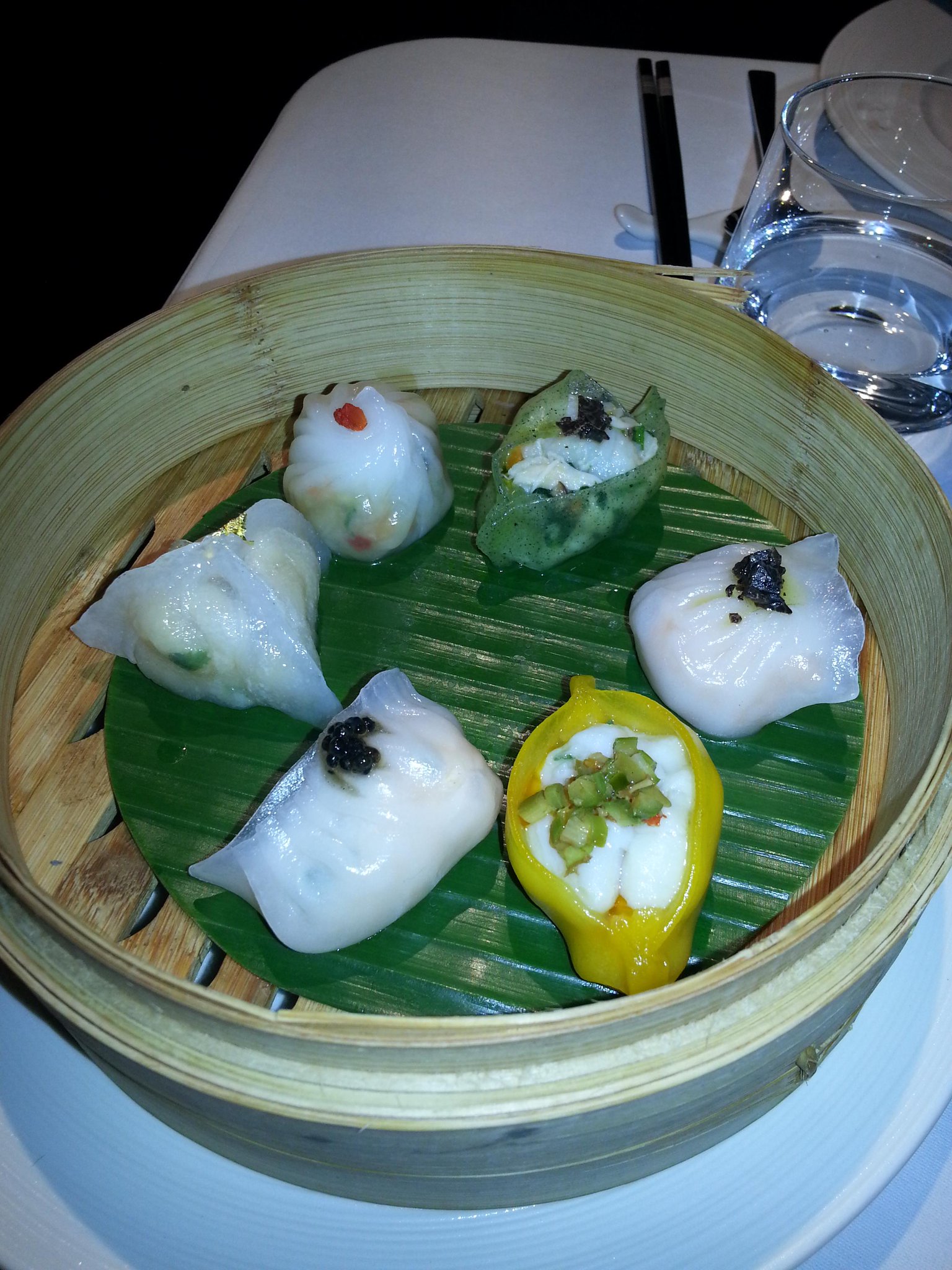 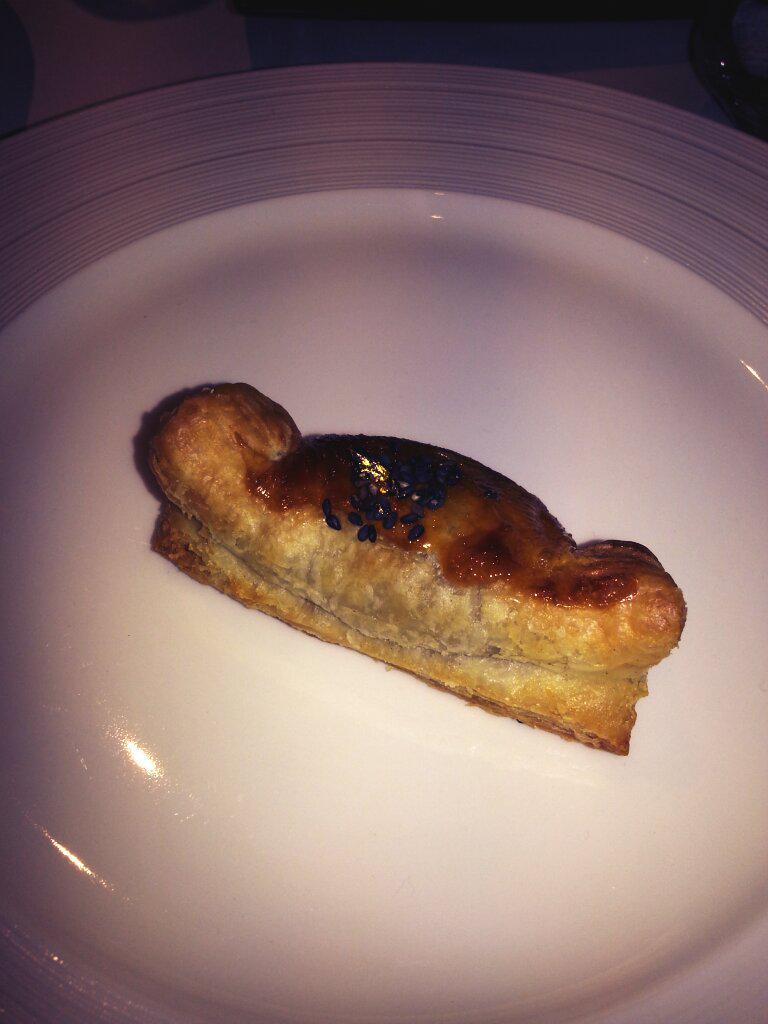 Next we were served a chef’s selection of sashimi which made a spectacular entrance arriving on billowing dry ice! Our favourites were the salmon and swordfish. 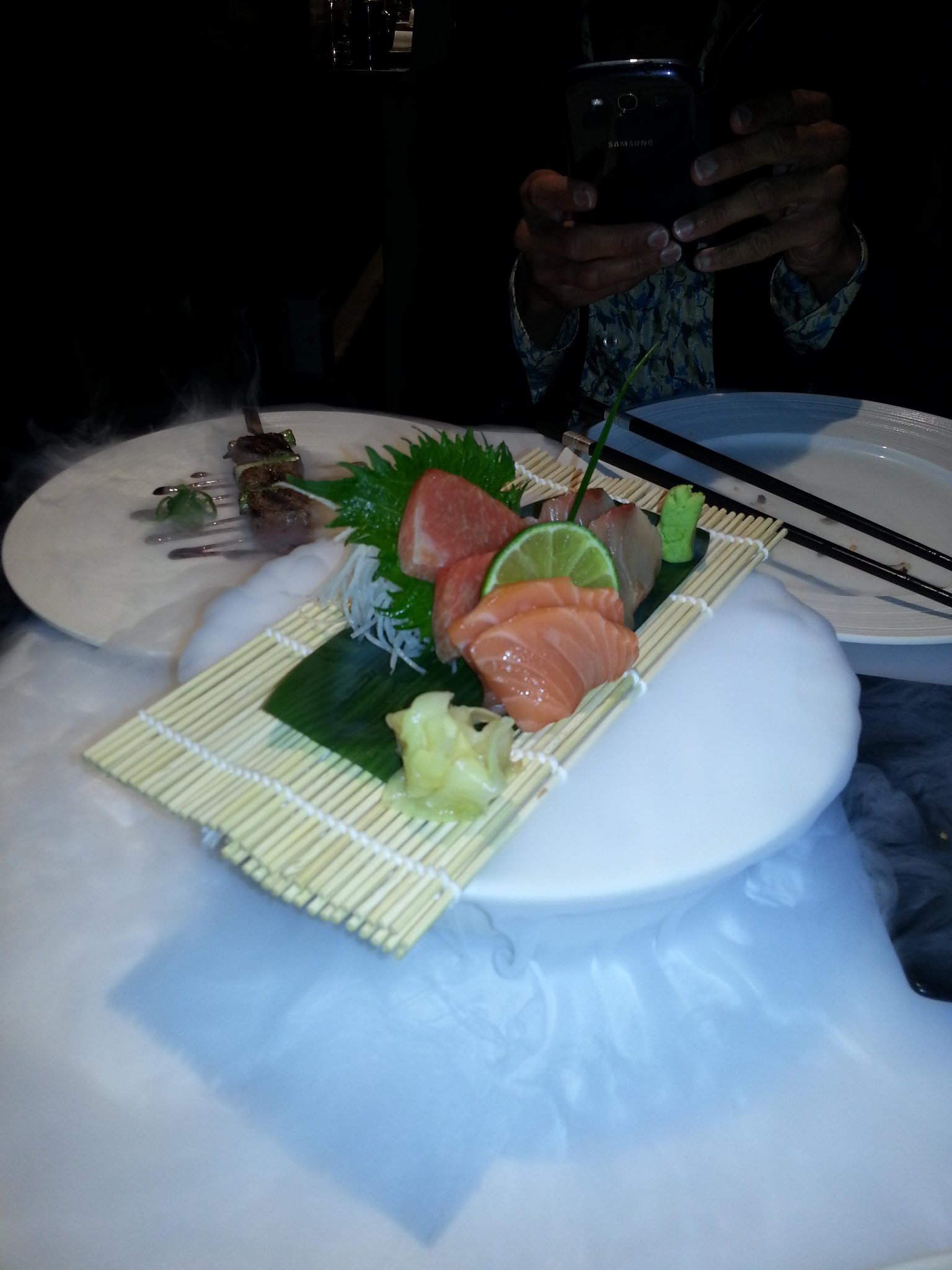 This was accompanied by Wagyu Beef skewers (£29) which were surprisingly chewy and a bit of a disappointment. 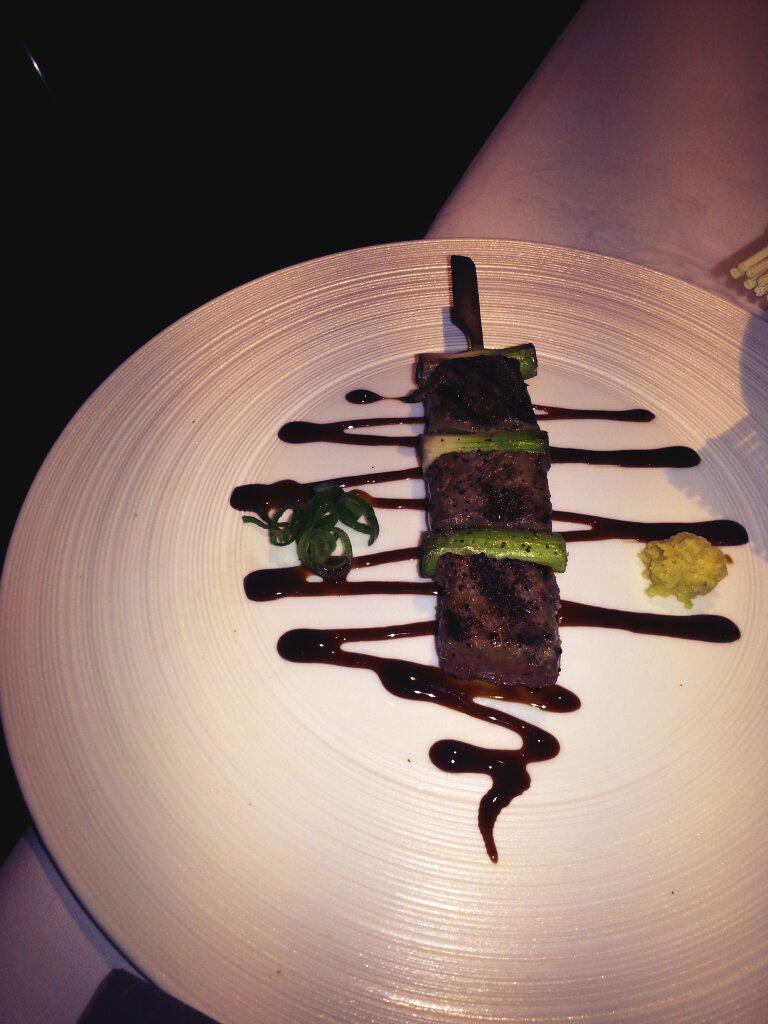 Then arrived Chai Wu’s signature dish of Beijing Duck (half duck £42 / full duck £68) served with various sauces and designed to hit all the senses. It was carved ceremoniously at our table. Wonderful crispy skin and served with pancakes and Mantou buns (a traditional Chinese bread). It was much better than the crispy ducks we ate whilst on our China tour, so credit to Ian for create such a fantastic and memorable dish (we are still talking about it)! 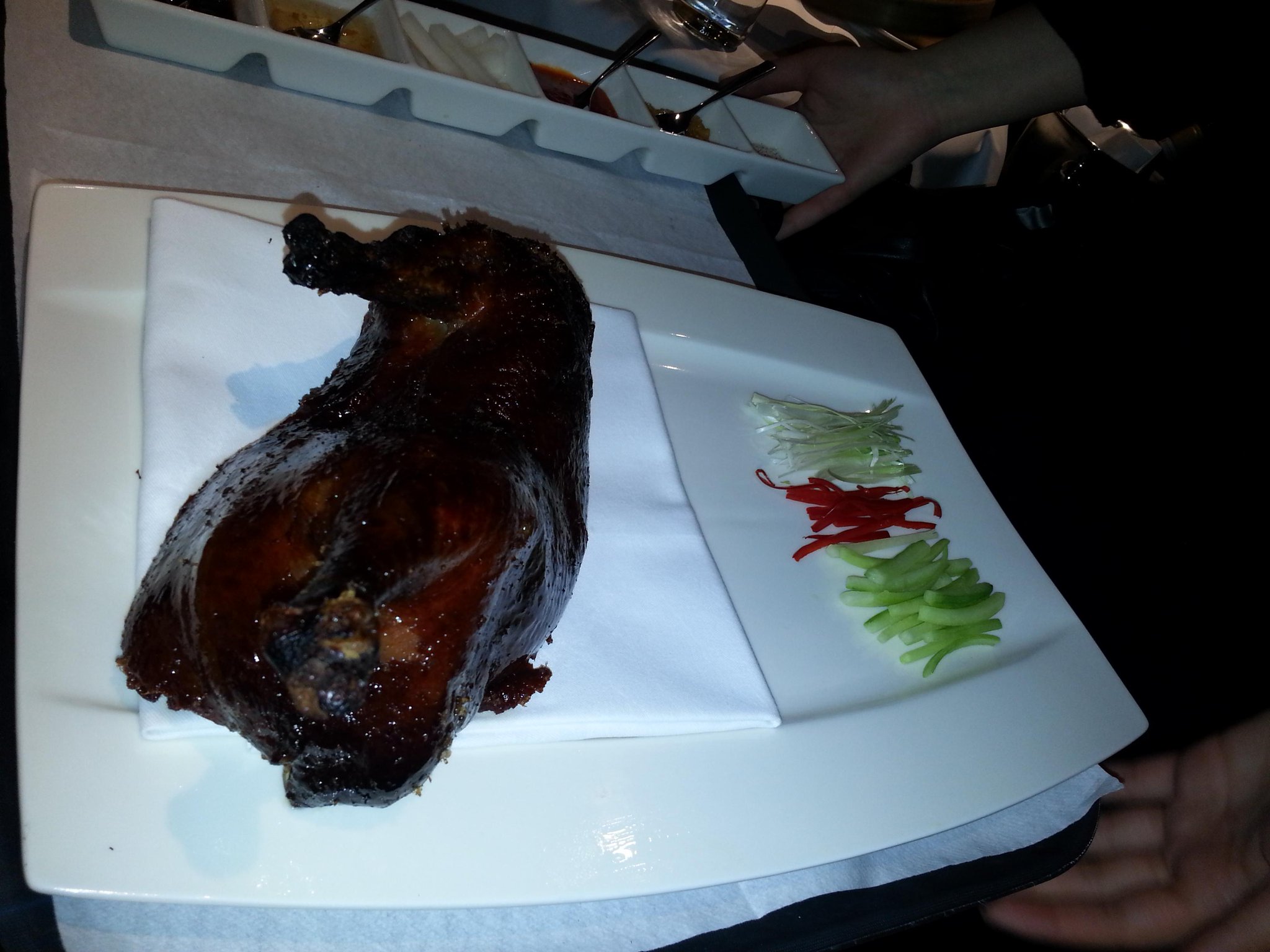 The other half of the duck was used to create minced duck served on lettuce leaves. 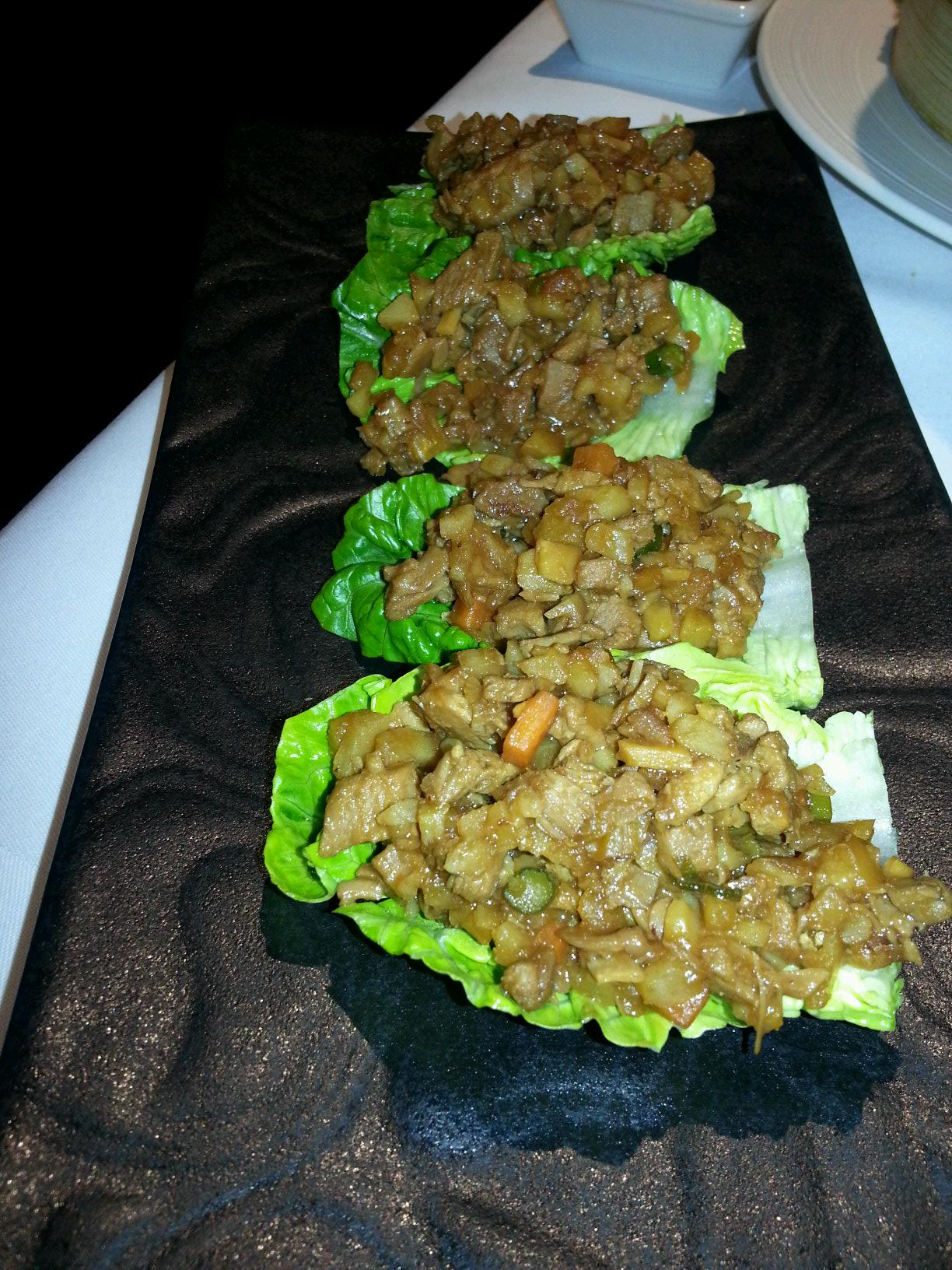 Next arrived sweet and sour chicken with dragon fruit (£18) which was very pretty, and J was especially happy as dragon fruit is one of his favourites. The crispiness of the chicken was complemented by the natural sweetness and texture of the dragon fruit. 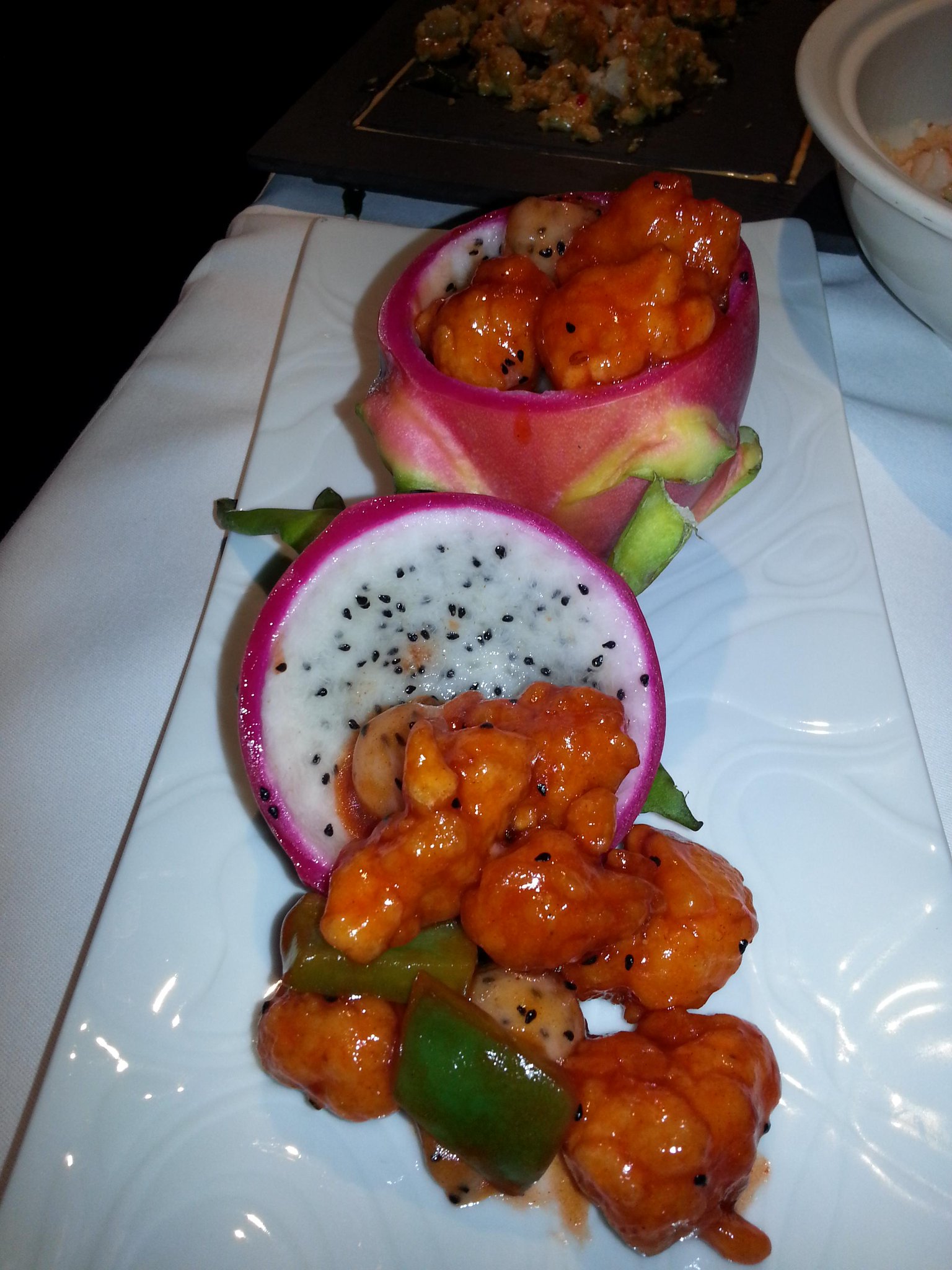 Chai Wu fried rice, coconut prawns, Chilean seabass with champagne and honey sauce followed. The Chai Wu rice (£21) was full of spring colours and flavours with its Prawns, Alaskan king crab, and fresh peas. The coconut prawns (£23) were sweet and juicy in flavour and we loved the texture and crunch from the fresh coconut. The Chilean seabass with champagne and honey sauce (£28) was delicate and flaky and complemented by the champagne foam and sweetness of the honey sauce.

J chose to opt for a Chai Wu Fizz (£16.50) recommended by our pleasant waitress Alice, a champagne cocktail which she said went well with the above dishes as the Midori, lychee juice and champagne complemented their flavours. J agreed. 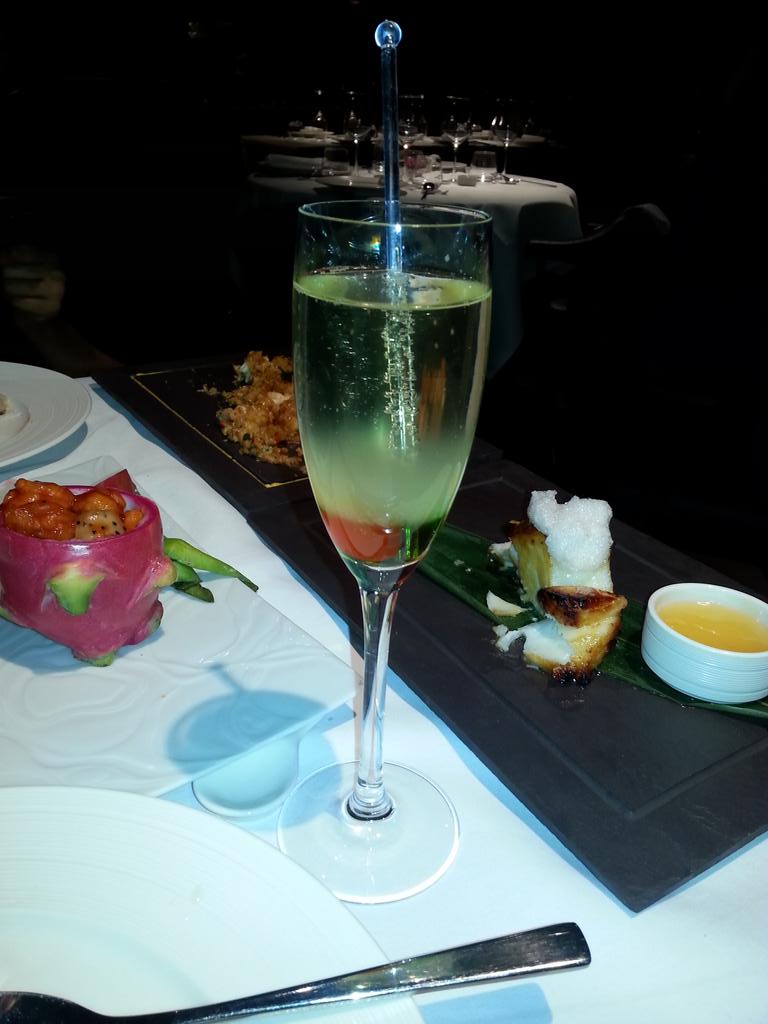 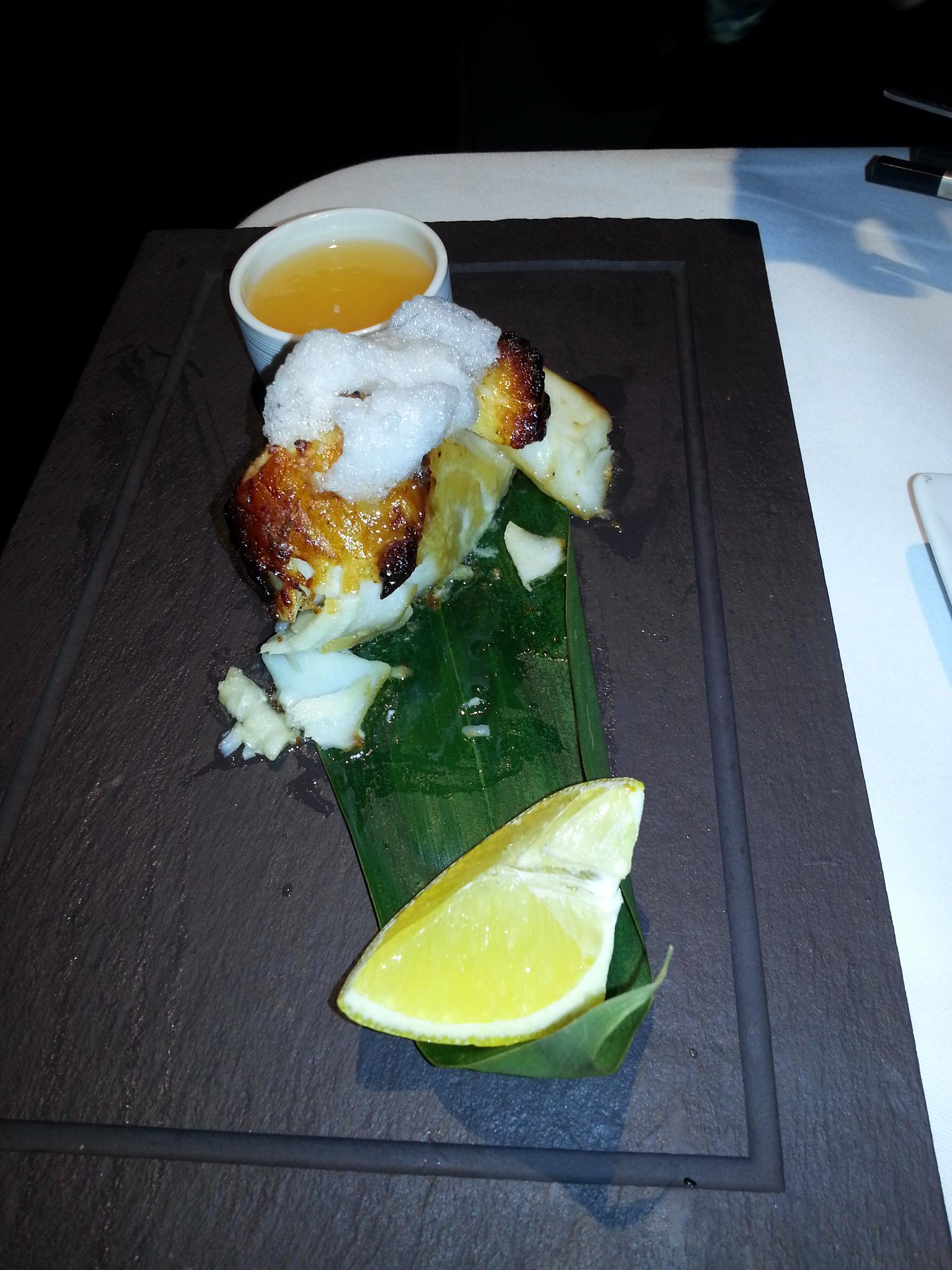 Being dessert obsessed, we had checked out the dessert menu before arriving and had both agreed that our desserts of choice were the chocolate sphere & green tea chocolate fondant. Ian must have read our minds as these were exactly what arrived …

Chocolate sphere in the process of being melted by hot white chocolate stream/ sauce (£9): 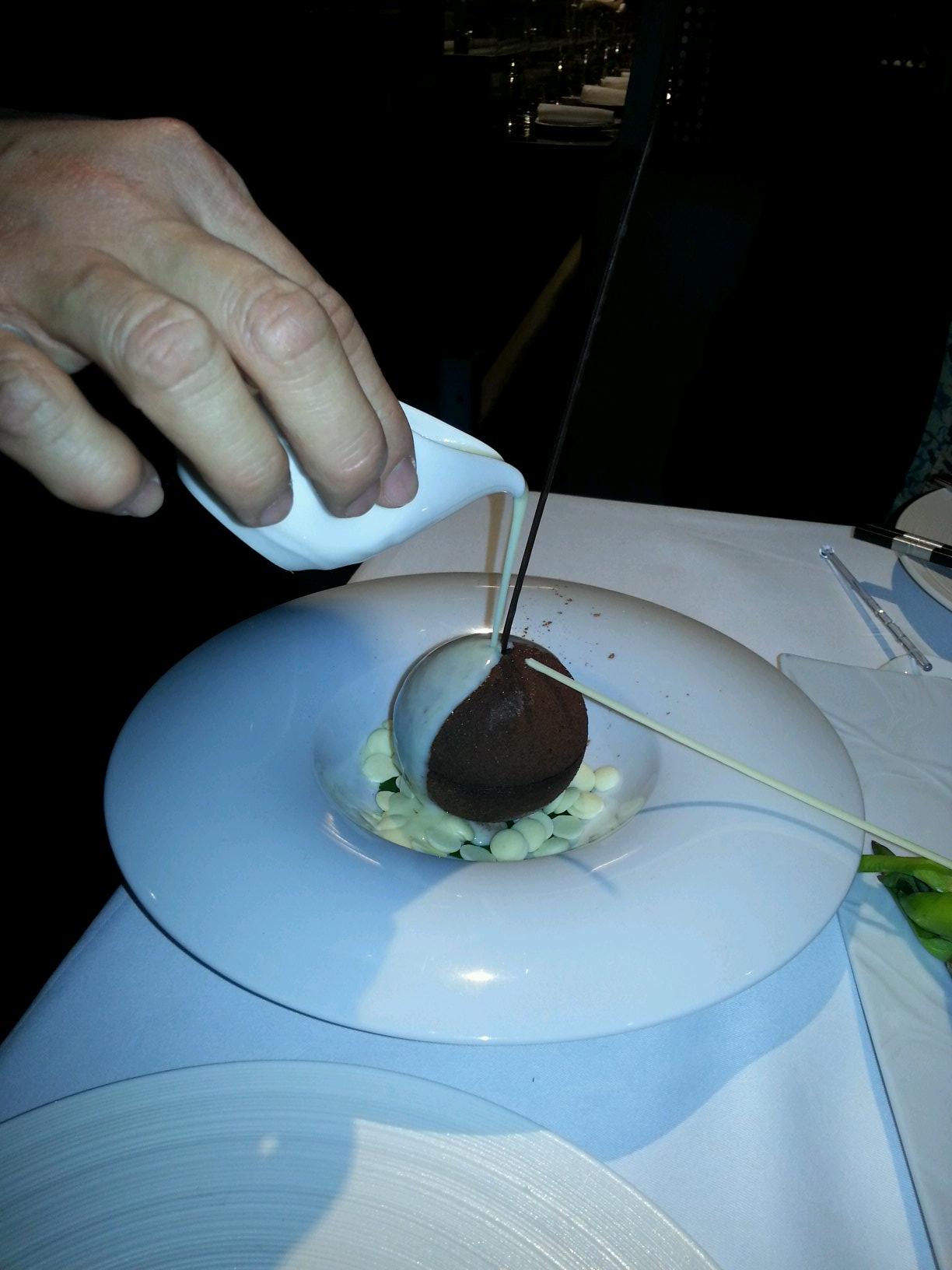 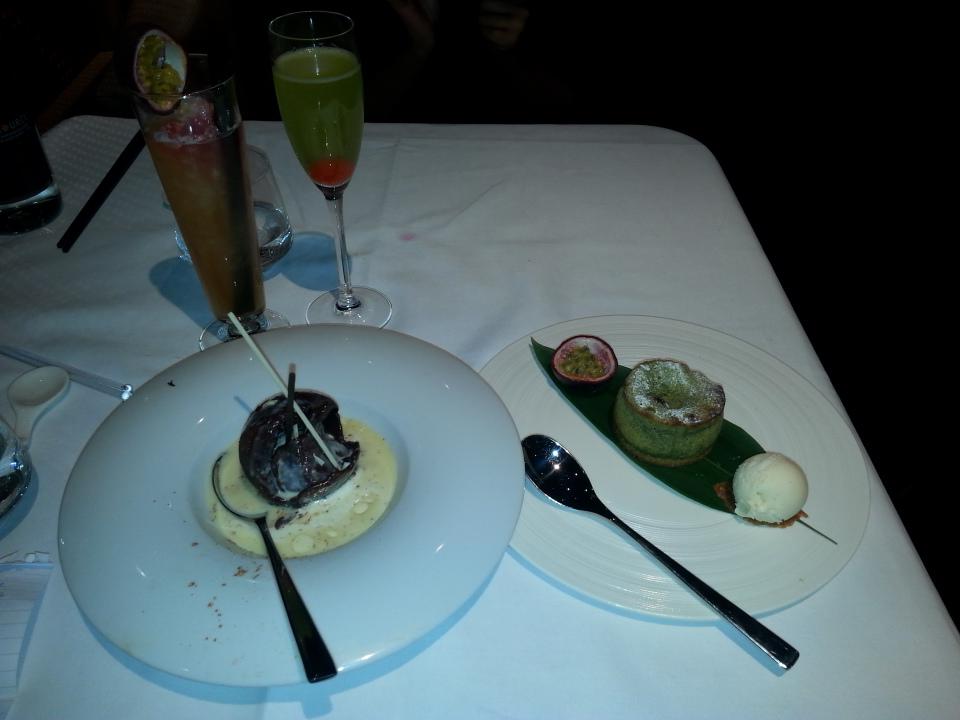 C got a Strawberry Champagne Bellini (£16.50) to accompany her dessert. 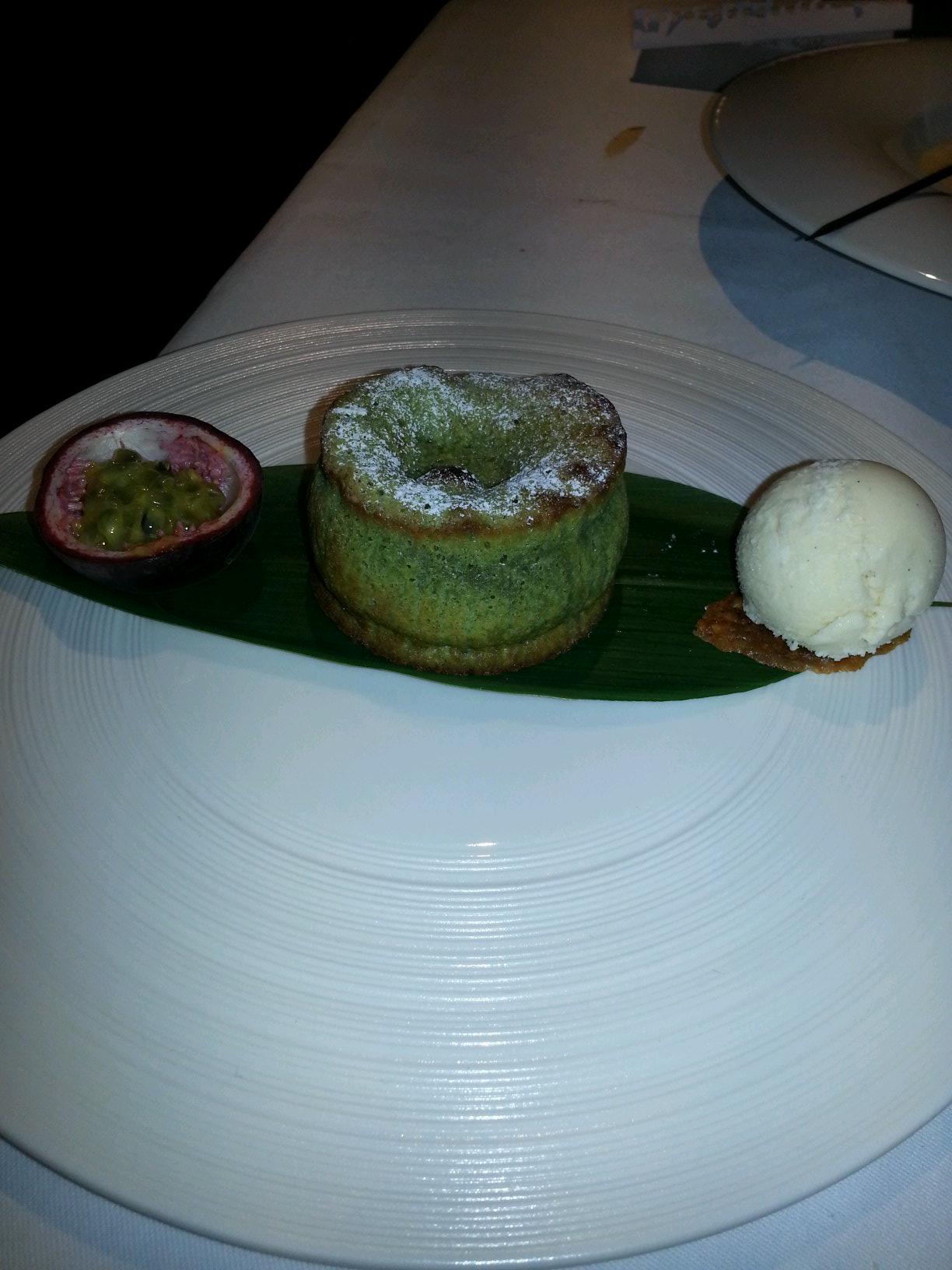 Sadly, even though we love desserts, the white chocolate stream/ sauce was way too sweet for our liking and masked the flavours of the dark chocolate sphere and the Madagascan vanilla ice cream held within. Maybe a mango coulis or a passionfruit jelly would work better.

Our favourite dessert was the green tea chocolate fondant with light, warm exterior encasing its gorgeous bright green liquid centre – that was dying to escape! 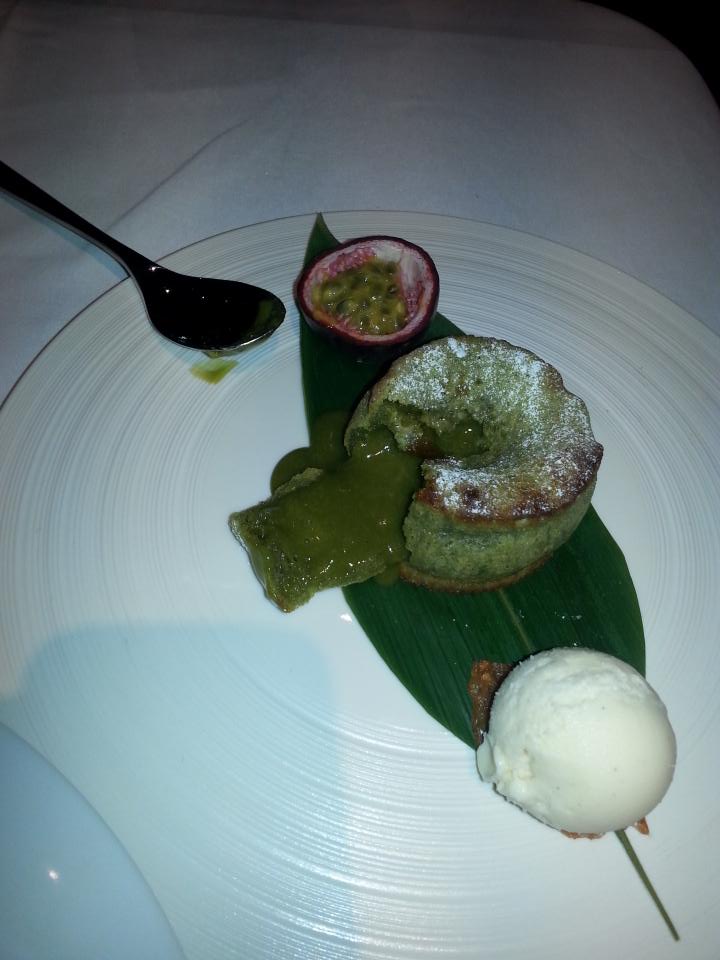 And the money shot! 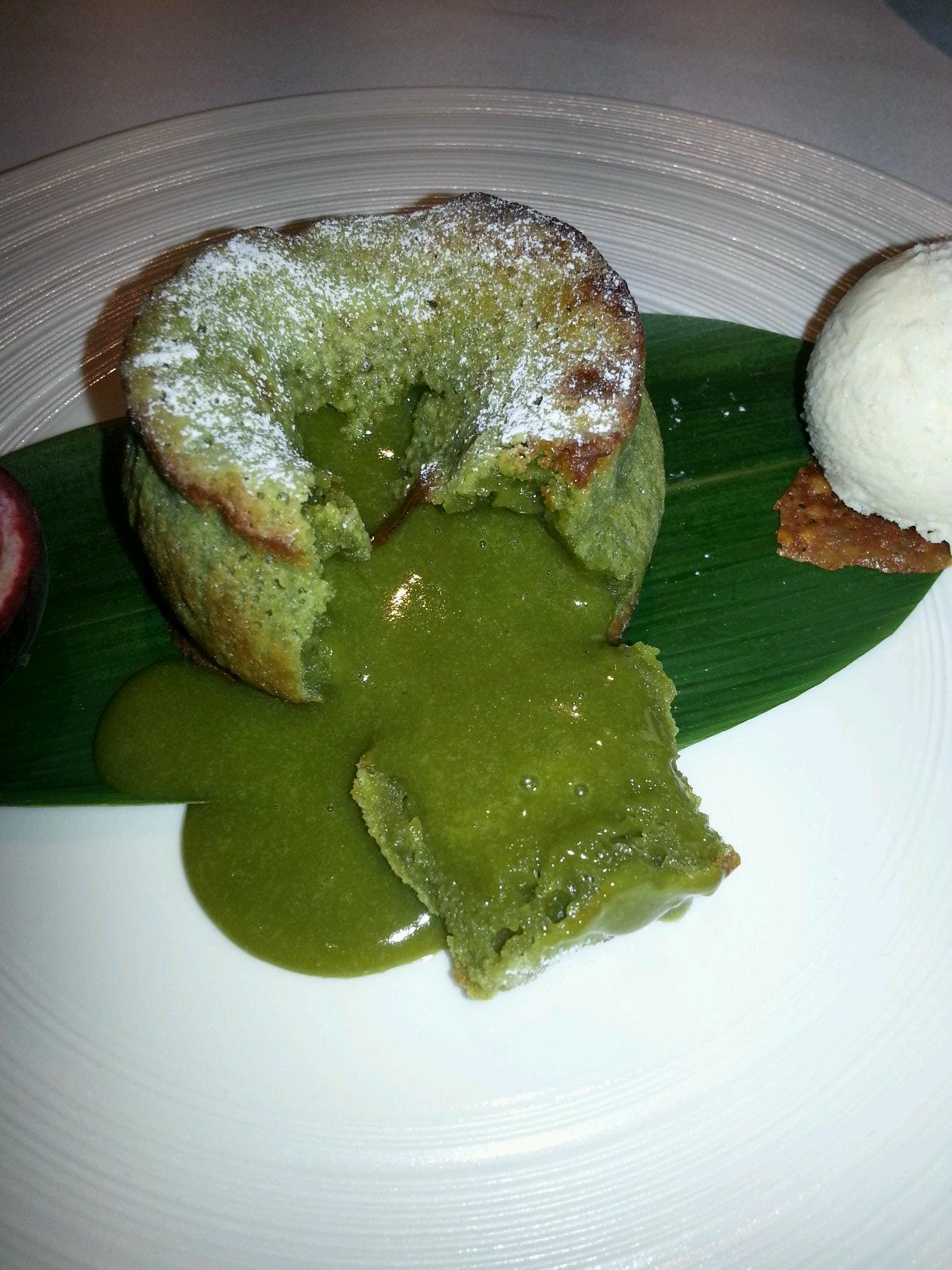 Chai Wu is a peaceful oasis away from the shopping frienze around Knightsbridge and in Harrods serving fantastic food. Highly recommended, especially if you are looking for an elegant option for a celebration serving the finest of Chinese cuisine. See you again soon!

Please also see our Facebook page for more photos from our visit.

Thank you to Faye and Rose at Sauce Communications and Zillah (PR for Mango Tree Group) for organising our dinner.

International food and travel blog by London based British Goan duo: Jason and Chiara Pinto. Twitter: @goantolondon @jasonpinto100 @chiarapinto About Goa: Goa is a small state on the western coast of India. Though the smallest Indian state, Goa has played an influential role in Indian history. Goa was one of the major trade centers in India, thus it had always been attracting the influential dynasties, seafarers, merchants, traders, monks and missionaries since its earliest known history. Throughout its history Goa has undergone continual transformation, leaving an indelible impression on various aspects of its cultural and socio-economic development. History of Goa: The East-West symbiosis of Goa makes it different from other parts of India, more than the historical and social niche. The history of Goa is a sweet and sour story of colonial heritage, oppressive rulers, a glorious culture, and uneventful immediate past. As a land with the identity of its own, Goa was brought into focus when it was liberated of Portugal from its oppressive rule of around 450 hundred years in 1961. Goa was captured and annexed to the Portuguese in 1510 following the urges of trade and demand of spices and also cottons and indigo. But, Goa has a history that starts much before Portugal even thought of Goa being where it is. Goa was coveted and ruled by a great number of Indian kingdoms and dynasties from the 4th century onwards. The first kingdom to rule Goa and Konkan were Bhojas, who were the feudatories of Ashoka in 4th and 5th centuries AD. The city of Chandrapur (present Chandor) was founded by Prince Chandraditya, son of Chalukya King Pulakesin from 566 to 597 A.D. after this, Goa was ruled consecutively by Silahara Dynasty, Kadamba Danasty, and finally Hoysalas from 1022 to 1342 A.D. From the 14th century onwards, Goa became a great trading center on the west coast, especially in the vast trade of horses imported from the Middle East. This was the time for bigger empires to move in and Vijayanagar Empire conquered it in 1344. But there empire was not going to last too long and in 1347, Bahmani Sultans defeated Vijayanagara forces in 1347 and controlled Goa. Afterwards, it was a time of great prosperity and peace for Gpa, especially during the rules of Yusuf Adil Shah and Ismail Adil Shah. They created beautiful houses, fortified Goa, and encouraged local craftsmen. Their liberal and progressive rule was not going to last too long and situation changed in 1510 A.D. Goa for all purposes was not on the Portuguese Radar even after a long time of their presence in India. When the Portuguese nobleman Alfonso de Albuquerque and his cousin Francisco de Albuquerque were sent with a powerful fleet in 1503 on the orders of King Dom Manuel I, the purpose was to defend the cargoes of spices, mostly pepper, against Arab Muslim raiders. The center of spice trade was Calicut at that time and Portuguese had built forts in Cochin and Cannanore. It was in 1506-08 that an opportunistic pirate, Timoja, persuaded Albuquerque to attack Goa and acquire a better land base. This made Goa, Portugal's first real territorial acquisition in Asia. After a brief period of recapturing by the Muslims, Goa Albuquerque finally captured Goa in 1510. The inquisition of Goa in 1540 reversed the previous liberal policy of Albuquerque and imposed strict censorship of literature and new laws to forbade non-Christians from professions. Forced conversions took place continuously, censorship was established on literature, the temples were destroyed, and non-Christian priests, holy men, and teachers were evicted. This led to continuous fleeing of Hindus from Goa to other parts of India. It is not that the relationship with Portugal brought only destruction for the Goans. Portuguese also built great churches like the church of St. Cajetan and Bom Jesus basilica in Old Goa, which is a pilgrimage site for the Christians from around the world. But it is also true that pre-1961; Goa was a highly impoverished region very backward and primitive. It is after the liberation that Goa of today has emerged and it has surprised even the locals many of whom had left their homeland before its liberation. Portugal and India are today friends and Goa continues to be a fascinating blend of Latin and Oriental. Information sourced from: http://www.royalorienttrain.com/goa/goa-history.html
View all posts by goantolondon →
This entry was posted in Chai Wu, Chai Wu, Chicken, Chinese, Duck, England, Fine Dining, Harrods, Knightsbridge, London, Mango Tree Restaurant Group, menus and prices, present ideas, Sauce Communications, Sushi and tagged @ChaiWuLondon, @IanPengelley, @SauceComms, Beijing Duck, Chai Wu, chef's selection, Chinese, dim sum, dry ice, Fine dining, Harrods, Ian Pengelley, Knightsbridge, London, Mango Tree, Mango Tree Restaurant Group, peking duck, sashimi, sushi. Bookmark the permalink.