The British are a rowdy lot, a lot that enjoys their food. Many of us have grown up with various kinds of food, and surprisingly some of the healthiest dishes in the world due to our love of roast vegetables. But if you’re getting a little bored of the way our dishes are served or are after a little home away from home, you can always travel to other countries to try similar dishes. Below are a handful of hearty British meals and where they can be best enjoyed and why. 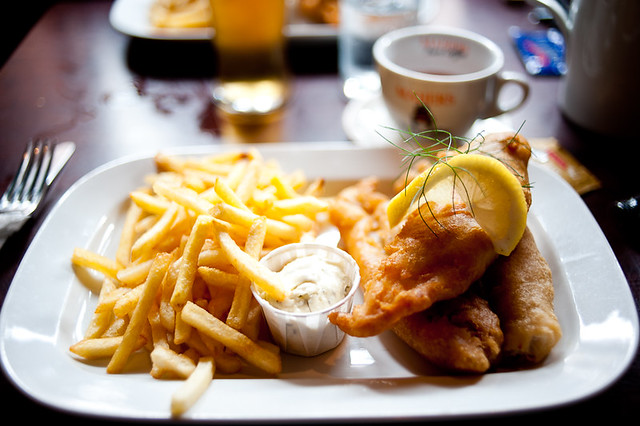 Fish and chips to a grown adult is a slightly more grown up way of eating fish fingers with smiley faces, we all went there. But fish and chips has long been a meal for those living on the coast, but has slowly made its way into the mainland. Fish should be best enjoyed when fresh, which means going to a country well known for it’s fresh fish. For raw fish of course you would want to go to Japan, however for cooked fish you’d be better off in Malaysia. The fish here is almost all fresh and the even the stalls will serve ready to eat fish dishes. Although you may be hard pressed to find what we see as chips over there, you can still find other delicious alternatives such as roast potatoes and even deep fried potatoes which are simply divine. 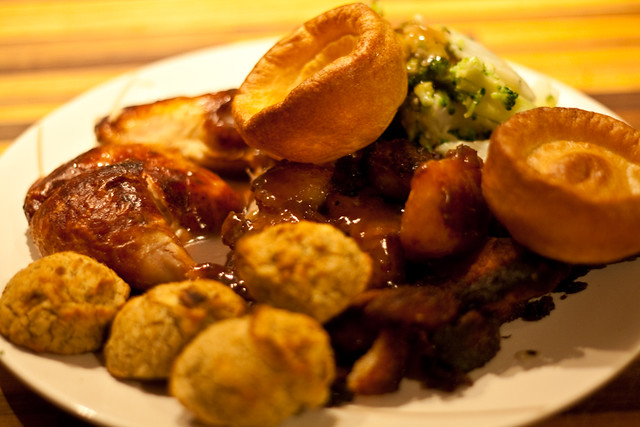 Long associated with Christmas dinner, this traditionally Sunday dish derives from the last supper in the Holy Bible. We see a roast dinner as our very own last supper, and every Sunday we’ll have a small roast to remind us of the religious connotations that come with it. But you don’t have to be Christian to enjoy it, as it’s a popular dish across Europe, not just the UK. Many will go away for Christmas, which means finding a way of having that roast dinner close enough to the one your mum makes. It’s difficult to find one outside of the EU, but if you’re not going far then you can enjoy one in several countries. The best, bar Britain, by far comes from Spain. The spanish know exactly what to do with chicken (and turkey), and can roast to it to absolute perfection.

Yorkshire Pudding/Toad in the Hole 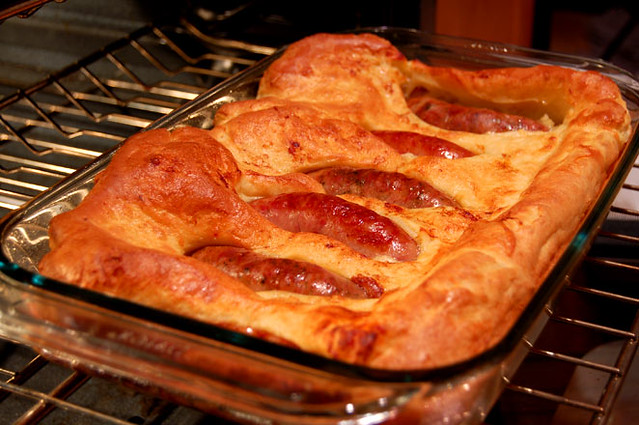 One of the most British dishes on this list simply has to be toad in the hole. The first glimpse of this dish came in the form of a recipe by Charles Elme Francatelli in 1861, which instead of having sausages included various chunks of meat. The name has been long debated, but it’s generally accepted that the name comes from the way it looks (like a toad poking its head out of a hole in the ground). A dish very close to this, of German-American origin, is called a Dutch Puff or Dutch Baby pancake. Like many pancakes, you can have this pancake savoury (although it’s more popular in its sweet version). It looks almost identical to a typical yorkshire pudding and can have meat added such as sausages or bacon (which can also be added to sweet pancakes). This breakfast pancake perfectly suits the few American diners it’s usually served in and is extremely popular in Oregon. 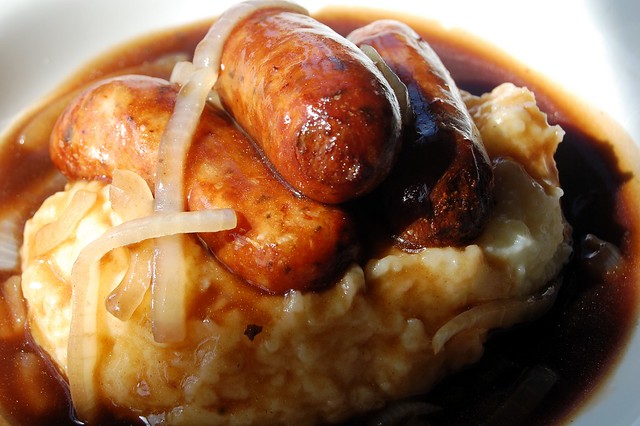 Boy, we really do love our sausages and potatoes don’t we? Yet another tasty dish, the meal bangers and mash has long been a popular dish among Brits young and old. It’s simplicity helps its popularity greatly, but it’s not just popular with the British crowd. This dish is enjoyed in 2 other countries, far from us. The first is the large and laid back country that is Canada and the second is neighbour to Auz, New Zealand. It could be said that it’s popularity in New Zealand could be due to the reign of Queen Elizabeth, however it’s much nicer to think of it just being all too delicious! The ingredients here are fresh, so even though the characteristics to this dish are the same, the flavour is more powerful and the meat is more tender and juicy here. 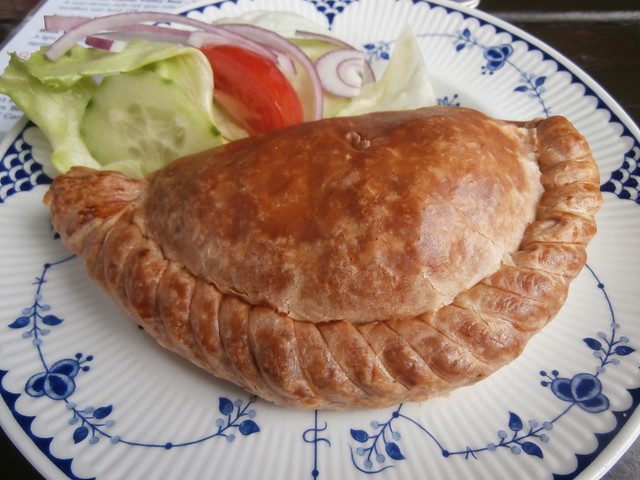 This is one of the more challenging dishes to find abroad, not because of the ingredients or the way it’s baked but because the Cornish pasty specifically has name protection throughout the EU, meaning it cannot go by a different name. In America they call this a pastie or a British pasty the reason for the change in spelling is due to a pasty in America (and other parts of the world) being a nipple accessory for burlesque performers. So is there anything close to this abroad? Well, you won’t find a pasty specifically, but you can find many other pastries equally as wonderful. You can actually have your very own Humble Pie from Australia! This is a pie company in Australia who specialize in pastry of all kinds and although this is a manufactured item of food, it’s still a fantastic dish which has been enjoyed since 1982. 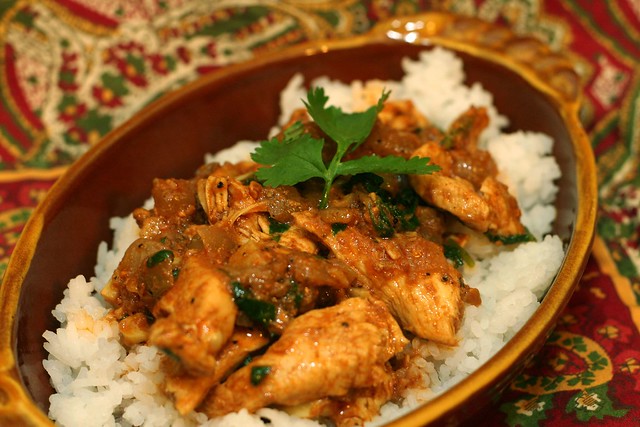 Okay so you might have caught me out slightly, this cuisine has long been debated as a British dish. However, this simply isn’t the case. We may love the delicious curry, but it was created by the people of India who call it “Kari”. The confusion came when curry was discovered in India by British traders, who made it popular and created their own versions with less powerful spices. To truly eat this dish you must go to India, where it is everyones main meal. You can get hundreds of different curries, from a calm korma all the way up to a steamy vindaloo. You can tell how hot a curry is by how dark it is, usually the darker it is is the hotter it is (as calmer curries tend to include yoghurt). Curry is traditionally eaten with the hands, more specifically with the right hand. This is because in India food is eaten with the right and your left hand is used when going to the toilet.

Author Bio: Jade Waddy is an experienced writer with an NOCN level 3 in journalism, she writes on all manner of subjects but specialises in travel and works on behalf of MyBreakTrip.

International food and travel blog by London based British Goan duo: Jason and Chiara Pinto. Twitter: @goantolondon @jasonpinto100 @chiarapinto About Goa: Goa is a small state on the western coast of India. Though the smallest Indian state, Goa has played an influential role in Indian history. Goa was one of the major trade centers in India, thus it had always been attracting the influential dynasties, seafarers, merchants, traders, monks and missionaries since its earliest known history. Throughout its history Goa has undergone continual transformation, leaving an indelible impression on various aspects of its cultural and socio-economic development. History of Goa: The East-West symbiosis of Goa makes it different from other parts of India, more than the historical and social niche. The history of Goa is a sweet and sour story of colonial heritage, oppressive rulers, a glorious culture, and uneventful immediate past. As a land with the identity of its own, Goa was brought into focus when it was liberated of Portugal from its oppressive rule of around 450 hundred years in 1961. Goa was captured and annexed to the Portuguese in 1510 following the urges of trade and demand of spices and also cottons and indigo. But, Goa has a history that starts much before Portugal even thought of Goa being where it is. Goa was coveted and ruled by a great number of Indian kingdoms and dynasties from the 4th century onwards. The first kingdom to rule Goa and Konkan were Bhojas, who were the feudatories of Ashoka in 4th and 5th centuries AD. The city of Chandrapur (present Chandor) was founded by Prince Chandraditya, son of Chalukya King Pulakesin from 566 to 597 A.D. after this, Goa was ruled consecutively by Silahara Dynasty, Kadamba Danasty, and finally Hoysalas from 1022 to 1342 A.D. From the 14th century onwards, Goa became a great trading center on the west coast, especially in the vast trade of horses imported from the Middle East. This was the time for bigger empires to move in and Vijayanagar Empire conquered it in 1344. But there empire was not going to last too long and in 1347, Bahmani Sultans defeated Vijayanagara forces in 1347 and controlled Goa. Afterwards, it was a time of great prosperity and peace for Gpa, especially during the rules of Yusuf Adil Shah and Ismail Adil Shah. They created beautiful houses, fortified Goa, and encouraged local craftsmen. Their liberal and progressive rule was not going to last too long and situation changed in 1510 A.D. Goa for all purposes was not on the Portuguese Radar even after a long time of their presence in India. When the Portuguese nobleman Alfonso de Albuquerque and his cousin Francisco de Albuquerque were sent with a powerful fleet in 1503 on the orders of King Dom Manuel I, the purpose was to defend the cargoes of spices, mostly pepper, against Arab Muslim raiders. The center of spice trade was Calicut at that time and Portuguese had built forts in Cochin and Cannanore. It was in 1506-08 that an opportunistic pirate, Timoja, persuaded Albuquerque to attack Goa and acquire a better land base. This made Goa, Portugal's first real territorial acquisition in Asia. After a brief period of recapturing by the Muslims, Goa Albuquerque finally captured Goa in 1510. The inquisition of Goa in 1540 reversed the previous liberal policy of Albuquerque and imposed strict censorship of literature and new laws to forbade non-Christians from professions. Forced conversions took place continuously, censorship was established on literature, the temples were destroyed, and non-Christian priests, holy men, and teachers were evicted. This led to continuous fleeing of Hindus from Goa to other parts of India. It is not that the relationship with Portugal brought only destruction for the Goans. Portuguese also built great churches like the church of St. Cajetan and Bom Jesus basilica in Old Goa, which is a pilgrimage site for the Christians from around the world. But it is also true that pre-1961; Goa was a highly impoverished region very backward and primitive. It is after the liberation that Goa of today has emerged and it has surprised even the locals many of whom had left their homeland before its liberation. Portugal and India are today friends and Goa continues to be a fascinating blend of Latin and Oriental. Information sourced from: http://www.royalorienttrain.com/goa/goa-history.html
View all posts by goantolondon →
This entry was posted in Jade Waddy, My Break Trip, Popular British Cuisines Best Enjoyed Abroad and tagged Abroad, Best, British, Cuisines, Editor, Enjoyed, guest post, Jade Waddy, My Break Trip, Popular, Popular British Cuisines Best Enjoyed Abroad, Writer. Bookmark the permalink.