Posted on February 2, 2015 by goantolondon

You have to walk down some fairly nondescript stairs to reach this basement cafe. But when you get there it is as if you are walking into your grandma’s living room. Cozy in all senses of the word, you will get up close and personal with your fellow diners, or in this case high tea-ers. We settled in on the sofas at the end and prepared for a serious case of Indian style overfeeding. If you’ve never experienced Indian hospitality before remember to pace yourself, there’s lots of food to come!

We kicked off with masala chai (Indian spiced tea), meethi (Indian savoury crackers made with semolina flour and fennel seeds), rich tea biscuits and a variety of sandwiches (Cucumber, Mint & Apple; Mix Veg; and Garam Masala Chicken). Though the sandwiches were pleasant, we felt that the aniseed notes in the chicken were slightly overpowering. It would be nice to have the crusts cut off!

Masala chai is made with ginger, cardamom, cloves, loose teas leaves, plus milk and boiled to get that authentic taste. Theirs was the perfect balance of spices and complements the sandwiches and chai bites during the afternoon.

Love the mixture of different crockery and cute teapots. 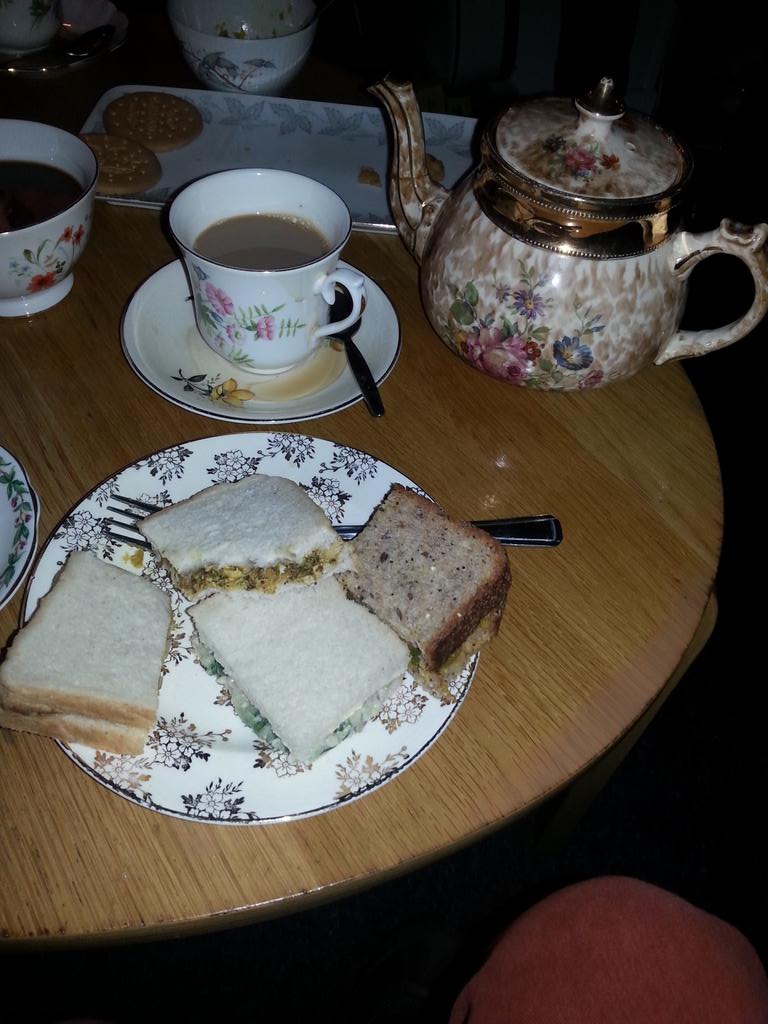 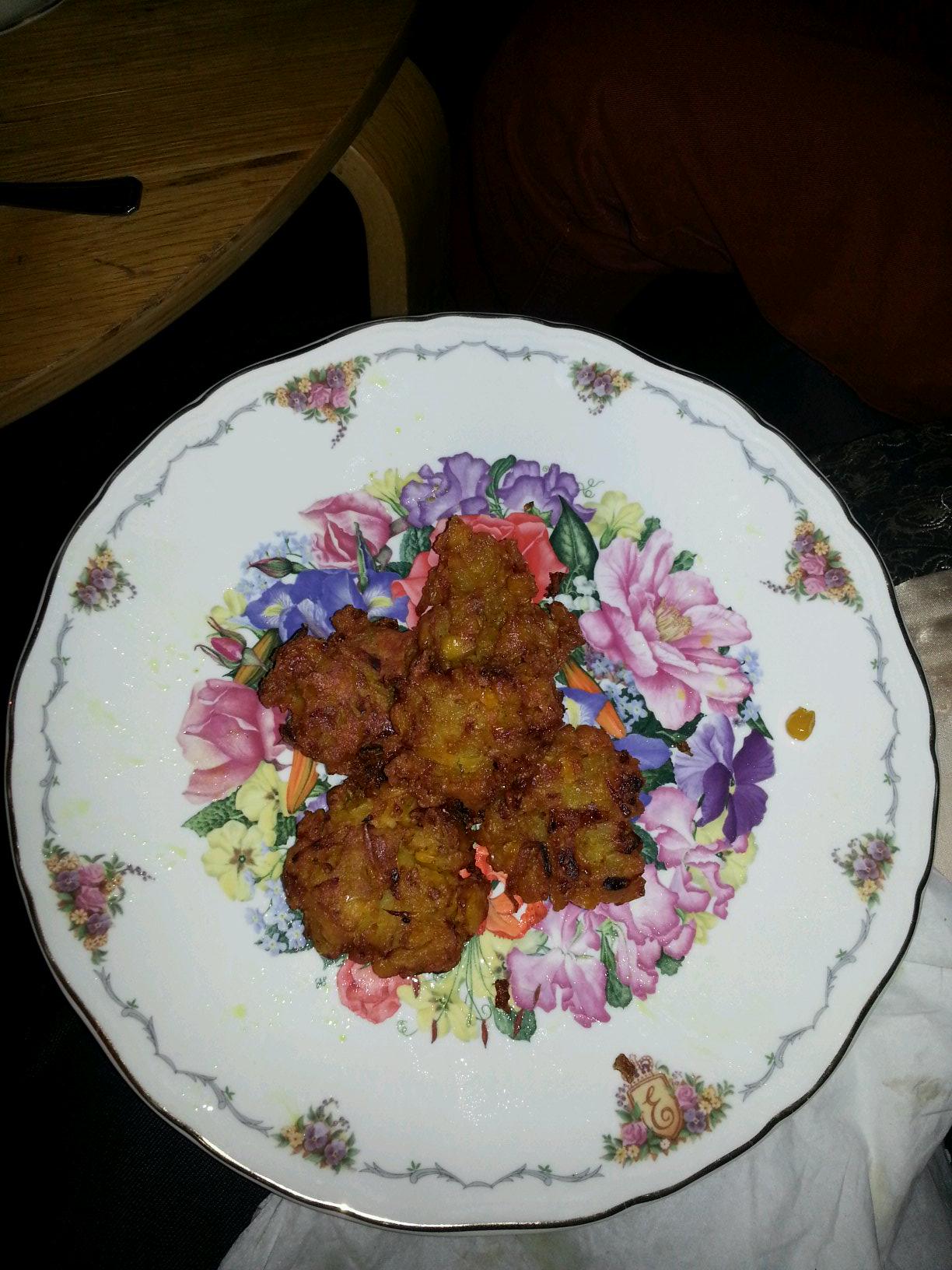 Then mini uttapams (semolina pancakes) with chicken or veggies served with an apple and pear chutney (veggie one below). Loved how Arti and Upma sprinkled them with chaat masala (made with coriander seeds, fennel seeds, raw mango powder and black salt) which brought the pancakes to life, and when coupled with the chutney they were light, heavenly mouthfuls. (The chaat masala gets its distinctive flavour from the black salt used to make it.) It added a fantastic zingy, tangy element to the dish.

We loved the Kache Kele & Mattar ki Tikkiya (Raw Banana & Peas Mini Cutlets) which was an inspired addition to the menu by Upma, as they had a crispy exterior with a similar flavour to plantain. In a word, gorgeous!

We first tucked into Aloo (Potato) Samosas and later Keema (Lamb) Samosas (below) – made with proper samosa pastry as opposed to cheating with filo! Loved the ajwain (carom seeds; a smaller version of cumin) in the pastry too. Ajwain has a similar flavour profile to thyme and adds a distinctive flavour to a dish. Though would have liked the samosas to be a bit spicer, we appreciate that this is personal preference so may be a chilli chutney could be left on the table to allow people to adjust the heat level. 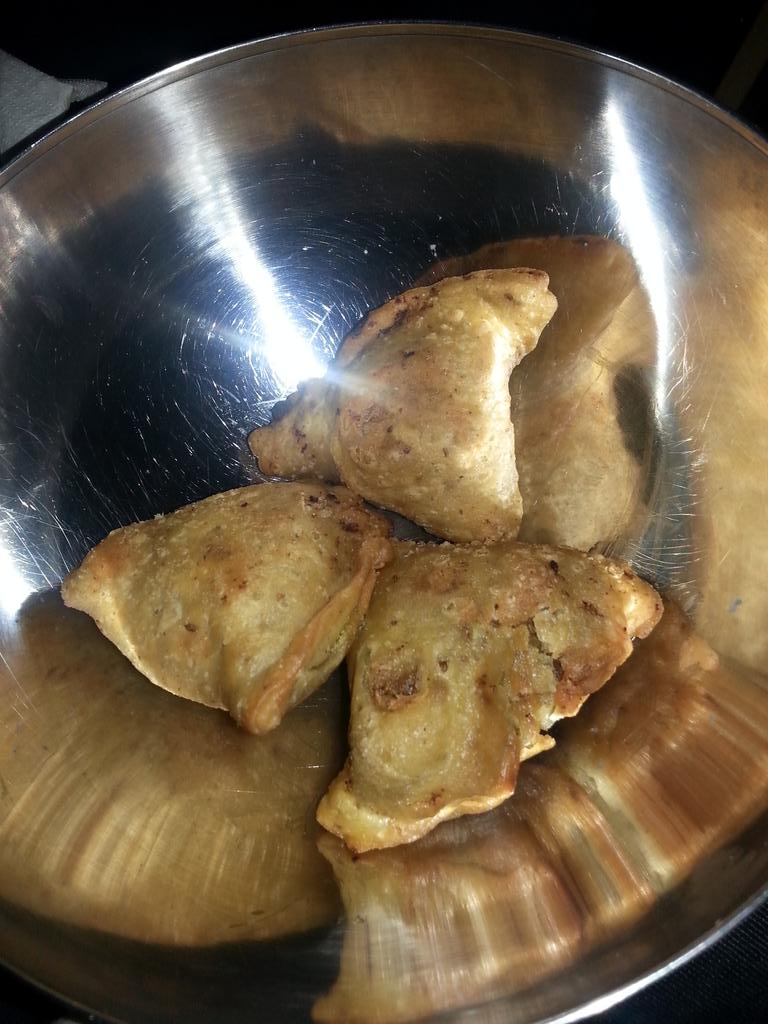 We ended on a Dessert platter: Gajjar (carrot) halwa, coconut halwa, saffron & cardamom shrikhand (strained yoghurt) and shahi toast (crispy bread soaked in sugar syrup topped with cream and pistachios). You need to have a sweet tooth to appreciate Indian desserts but my favourites were the shahi toast which I’ve never had before and the shrikhand. Saffron is an unusual addition to this and I was worried it would make it taste too savory but the balance of flavours was just right. 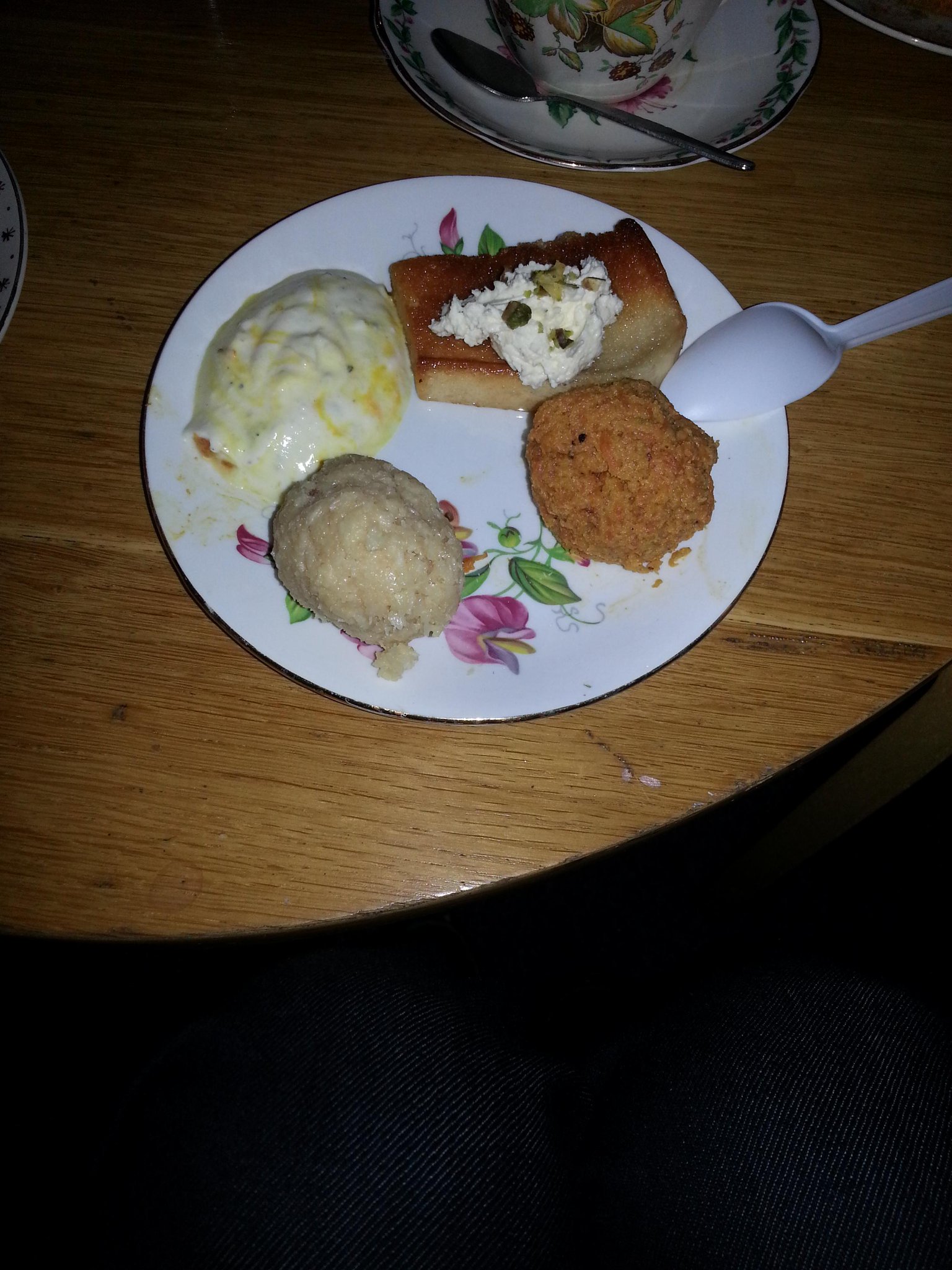 Arti and Upma did a really good job of working as a team in the small galley kitchen and this tea is definitely a quirky and unusual experience. There is more of an emphasis on the savory rather than sweet, but I think this is for the best as Indian sweets can only be consumed in small quantities! They did a good job of keeping everyone tea topped up. And you  will never leave a Dhaba Lane tea knowingly underfed, making this tea great value for money (£25 per person)!

Highly recommend visiting and checking this place out for lunch and tea, and soon dinner as well!

International food and travel blog by London based British Goan duo: Jason and Chiara Pinto. Twitter: @goantolondon @jasonpinto100 @chiarapinto About Goa: Goa is a small state on the western coast of India. Though the smallest Indian state, Goa has played an influential role in Indian history. Goa was one of the major trade centers in India, thus it had always been attracting the influential dynasties, seafarers, merchants, traders, monks and missionaries since its earliest known history. Throughout its history Goa has undergone continual transformation, leaving an indelible impression on various aspects of its cultural and socio-economic development. History of Goa: The East-West symbiosis of Goa makes it different from other parts of India, more than the historical and social niche. The history of Goa is a sweet and sour story of colonial heritage, oppressive rulers, a glorious culture, and uneventful immediate past. As a land with the identity of its own, Goa was brought into focus when it was liberated of Portugal from its oppressive rule of around 450 hundred years in 1961. Goa was captured and annexed to the Portuguese in 1510 following the urges of trade and demand of spices and also cottons and indigo. But, Goa has a history that starts much before Portugal even thought of Goa being where it is. Goa was coveted and ruled by a great number of Indian kingdoms and dynasties from the 4th century onwards. The first kingdom to rule Goa and Konkan were Bhojas, who were the feudatories of Ashoka in 4th and 5th centuries AD. The city of Chandrapur (present Chandor) was founded by Prince Chandraditya, son of Chalukya King Pulakesin from 566 to 597 A.D. after this, Goa was ruled consecutively by Silahara Dynasty, Kadamba Danasty, and finally Hoysalas from 1022 to 1342 A.D. From the 14th century onwards, Goa became a great trading center on the west coast, especially in the vast trade of horses imported from the Middle East. This was the time for bigger empires to move in and Vijayanagar Empire conquered it in 1344. But there empire was not going to last too long and in 1347, Bahmani Sultans defeated Vijayanagara forces in 1347 and controlled Goa. Afterwards, it was a time of great prosperity and peace for Gpa, especially during the rules of Yusuf Adil Shah and Ismail Adil Shah. They created beautiful houses, fortified Goa, and encouraged local craftsmen. Their liberal and progressive rule was not going to last too long and situation changed in 1510 A.D. Goa for all purposes was not on the Portuguese Radar even after a long time of their presence in India. When the Portuguese nobleman Alfonso de Albuquerque and his cousin Francisco de Albuquerque were sent with a powerful fleet in 1503 on the orders of King Dom Manuel I, the purpose was to defend the cargoes of spices, mostly pepper, against Arab Muslim raiders. The center of spice trade was Calicut at that time and Portuguese had built forts in Cochin and Cannanore. It was in 1506-08 that an opportunistic pirate, Timoja, persuaded Albuquerque to attack Goa and acquire a better land base. This made Goa, Portugal's first real territorial acquisition in Asia. After a brief period of recapturing by the Muslims, Goa Albuquerque finally captured Goa in 1510. The inquisition of Goa in 1540 reversed the previous liberal policy of Albuquerque and imposed strict censorship of literature and new laws to forbade non-Christians from professions. Forced conversions took place continuously, censorship was established on literature, the temples were destroyed, and non-Christian priests, holy men, and teachers were evicted. This led to continuous fleeing of Hindus from Goa to other parts of India. It is not that the relationship with Portugal brought only destruction for the Goans. Portuguese also built great churches like the church of St. Cajetan and Bom Jesus basilica in Old Goa, which is a pilgrimage site for the Christians from around the world. But it is also true that pre-1961; Goa was a highly impoverished region very backward and primitive. It is after the liberation that Goa of today has emerged and it has surprised even the locals many of whom had left their homeland before its liberation. Portugal and India are today friends and Goa continues to be a fascinating blend of Latin and Oriental. Information sourced from: http://www.royalorienttrain.com/goa/goa-history.html
View all posts by goantolondon →
This entry was posted in Afternoon Tea, Dalston, Dhaba Lane, Dhaba Lane, England, Food Safari ideas, Global inspirations, Haggerston, Hoxton, Hoxton, Indian, Indian High Tea, london, London, menus and prices, use of modern ingredients and tagged #FoodieChats, #HighTea, @AmoFranklin, @DhabaLane, @edible_exp, @foodviva, afternoon tea, Curtain Road, Dhaba Lane, eating, food safari, Hoxton, indian, Indian High Tea, Leonard Street, London, lunch, Old Street, shoreditch, snacks, takeaway, tours, walking. Bookmark the permalink.