We met the lovely, friendly Christina (Roast restaurant Social Media Co-ordinator) to collect our entry cards that we had won in their competition and had a brief chat before being let loose to explore on the final day of this festival.

Whilst we waited for the chefs who we were keen to watch at The Winter Fire Pit, we went to check out the culinary creativity over at the Ford Protege Project; where aspiring chefs are supported by the culinary star mentors. There we got to try some unusual flavour combinations in dishes. Especially enjoyed watching Chris Thompson (Sous Chef at Duck and Waffle) creating his dish below like a pro. 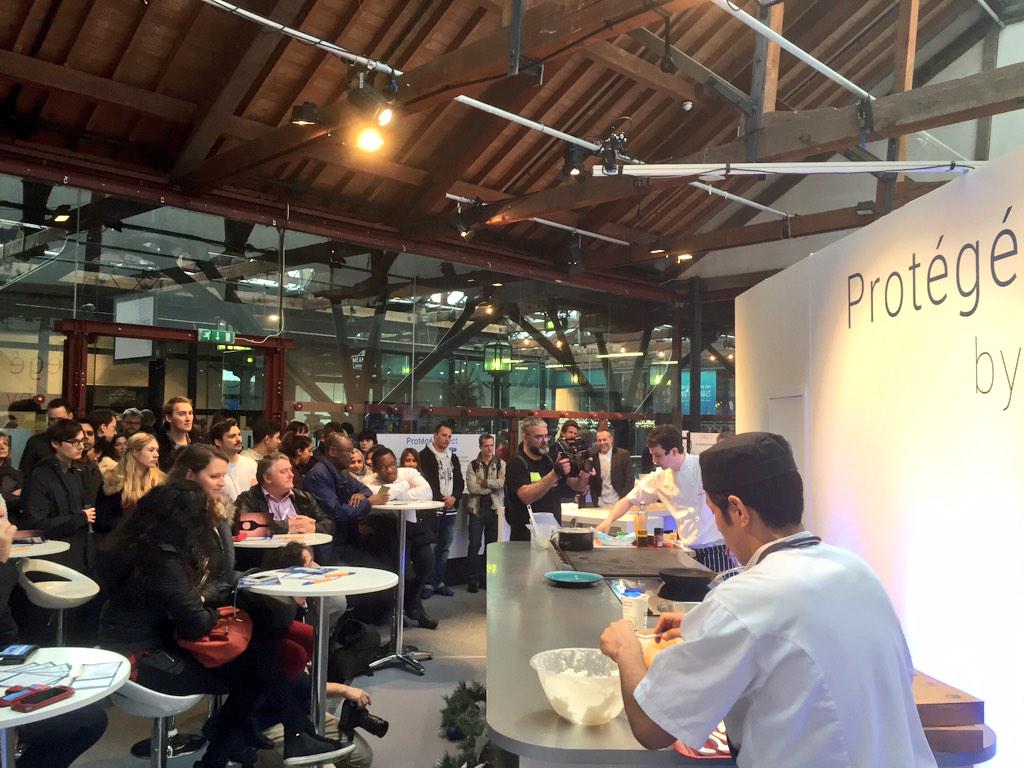 We quickly stopped off at Asda’s Extra Special Kitchen to watch a butchery masterclass of how to prepare lamb shanks with a nut crust and also a rolled pork belly with baked red onions and garlic. Thought that the pistachio added to the crust mix was an inspiration and also added some colour! 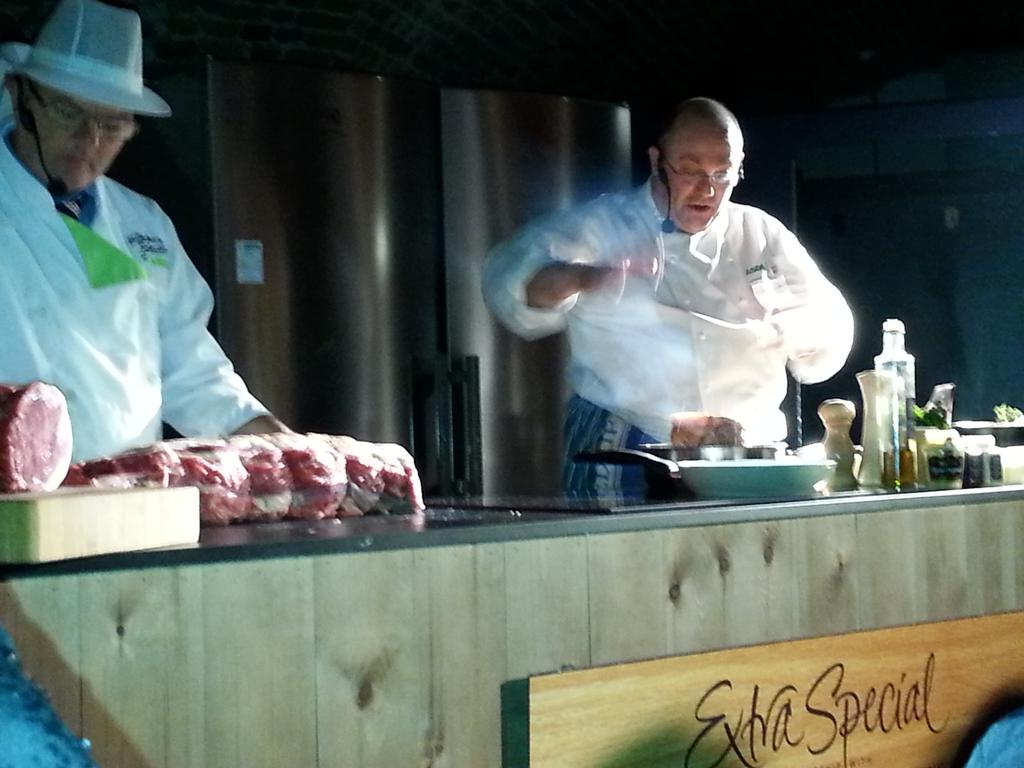 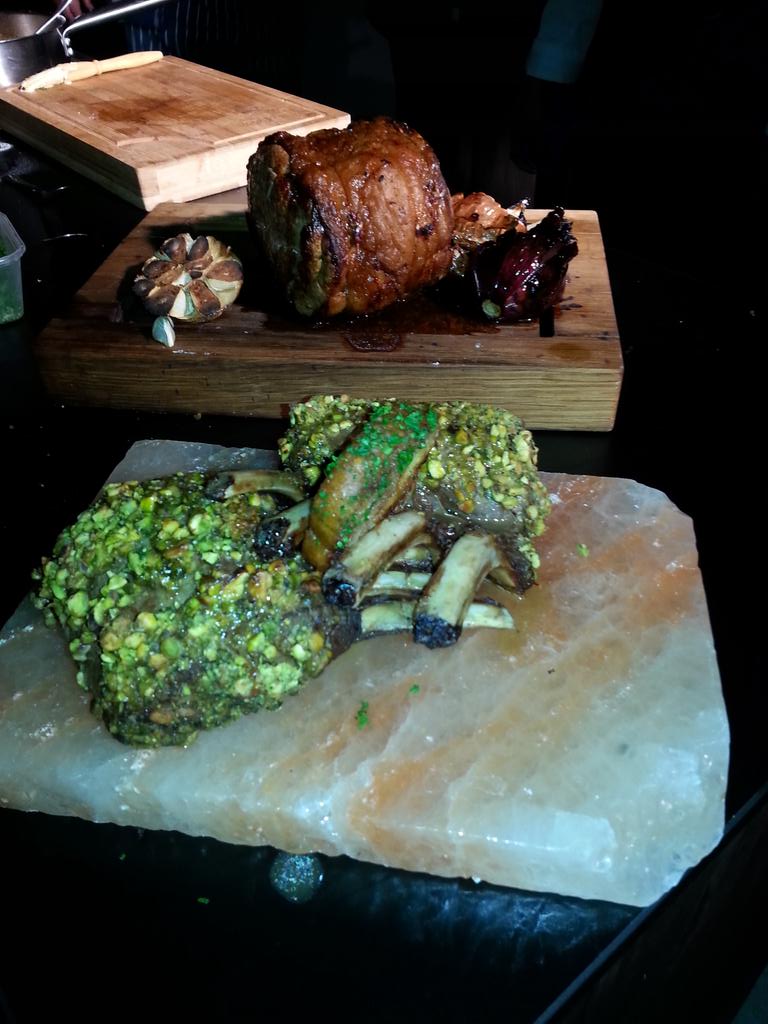 Other leading chefs who we watched avidly at The Winter Fire Pit were: Aidan McGee (The Truscott Arms), Atul Kochhar (Benares), and Cyrus Todiwala (Assado). Aidan below in action! 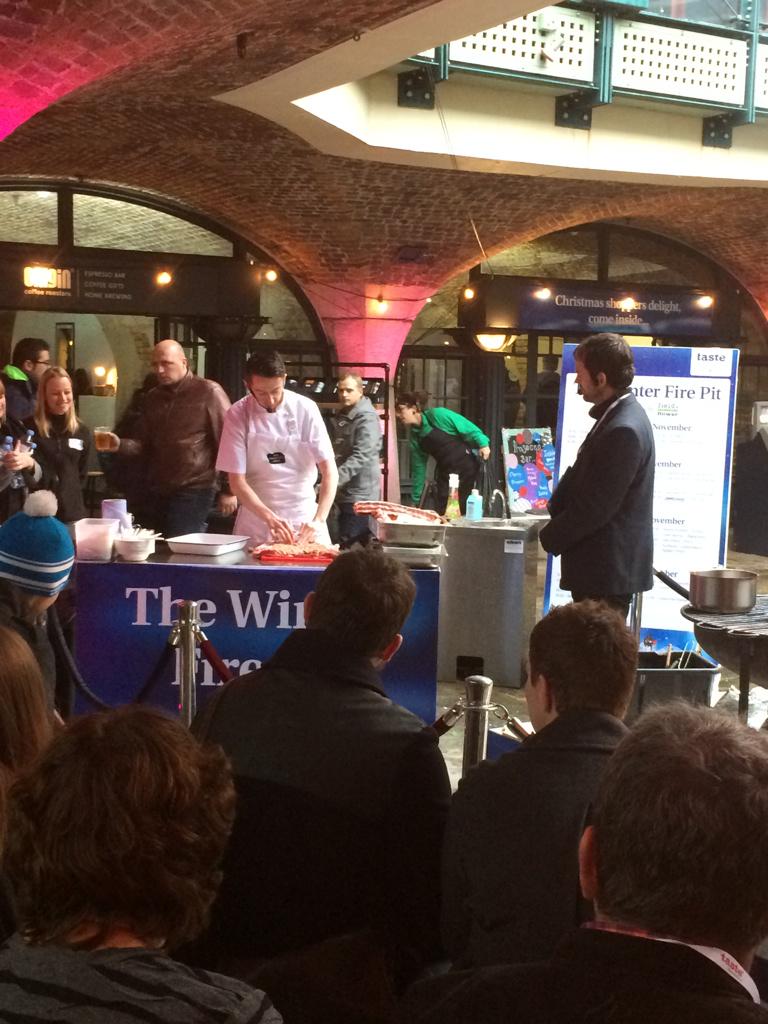 Origin Coffee provided us with beautiful espresso and latte which were the perfect pick me ups after getting a bit wet when we had to venture outside to The Winter Fire Pit.

Then a pit stop at Gu Puds to try out my swinging and eating skills! 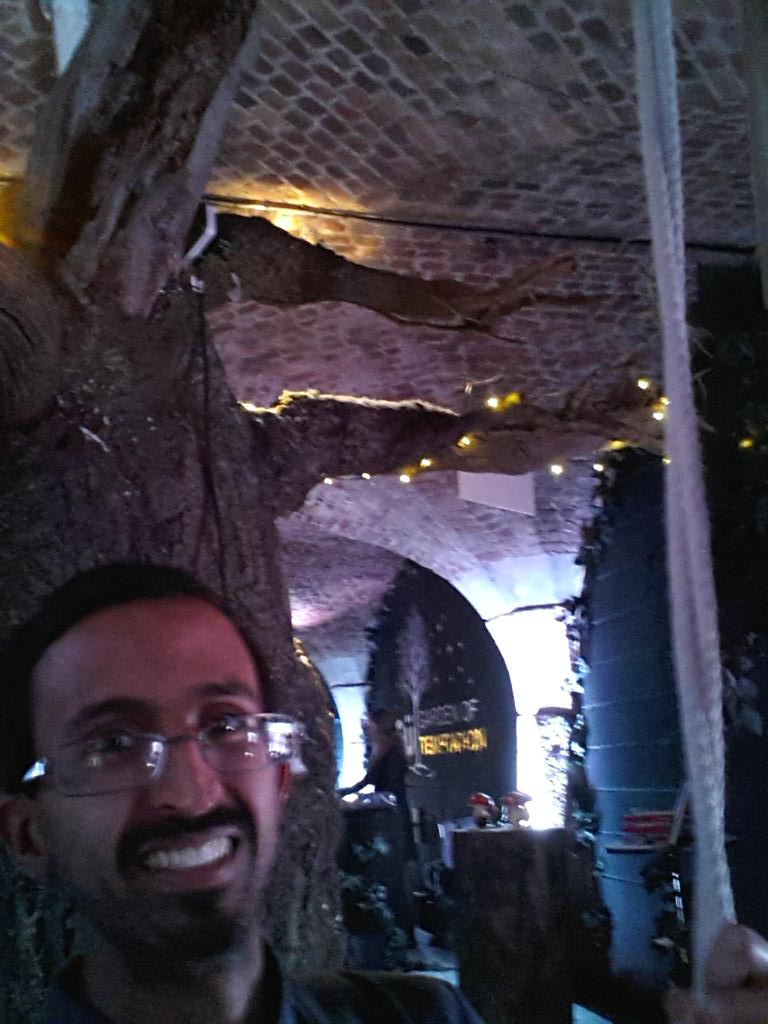 We took a break from some of the talks and demonstrations to wonder around the cosy indoor Producers Market. Make sure you save space though for any planned food, as it is easy to get quite full on all the samples you get offered whilst you wander about. Also, do what we did and buy the products you like but leave it behind the counter with the stall holders with your name/ business card attached as it saves you carrying them around the whole day (just make a note on the map so you remember to collect your bags after!).

I am partial to a glass of port, and the friendly team at the wine2laydown stall talked us through a large selection of ports whilst letting us try quite a few. My favourites were the Quinta do Infantado Ports 2001 & 2008 as they had a wonderful rich, peppery hit on the nose and a strong, robust flavour with a honey caramelly finish. A pleasure to drink, and I will be ordering more to help get us through these colder winter’s months!

We returned to the Asda Extra Special Kitchen to learn from Mel and Jess (Leith’s School of Food and Wine) how to make a pastry encased baked camembert,  stuffed grilled tomatoes, and poached pears with a stilton and nut crumb. The camembert was all crusty on the outside but oozing warm gooeyness as soon as they cut into it. Absolutely loved the flavours and textures of the poached pears which were cooked in a mix of orange juice, rioja and whisky with the creamy, pungent hit from the stilton and the crunch from the crushed walnuts in the crumb coating. Also, they showed us that you could serve some of the poached pears sliced on top of chicory leaves and topped with crumbed stilton. They finished off with showing us how to make chocolate fondants, the secret to always getting  a gorgeous liquid chocolate centre is to put one of the Asda extra special truffles into your batter, a little trick I’ll be using in future! 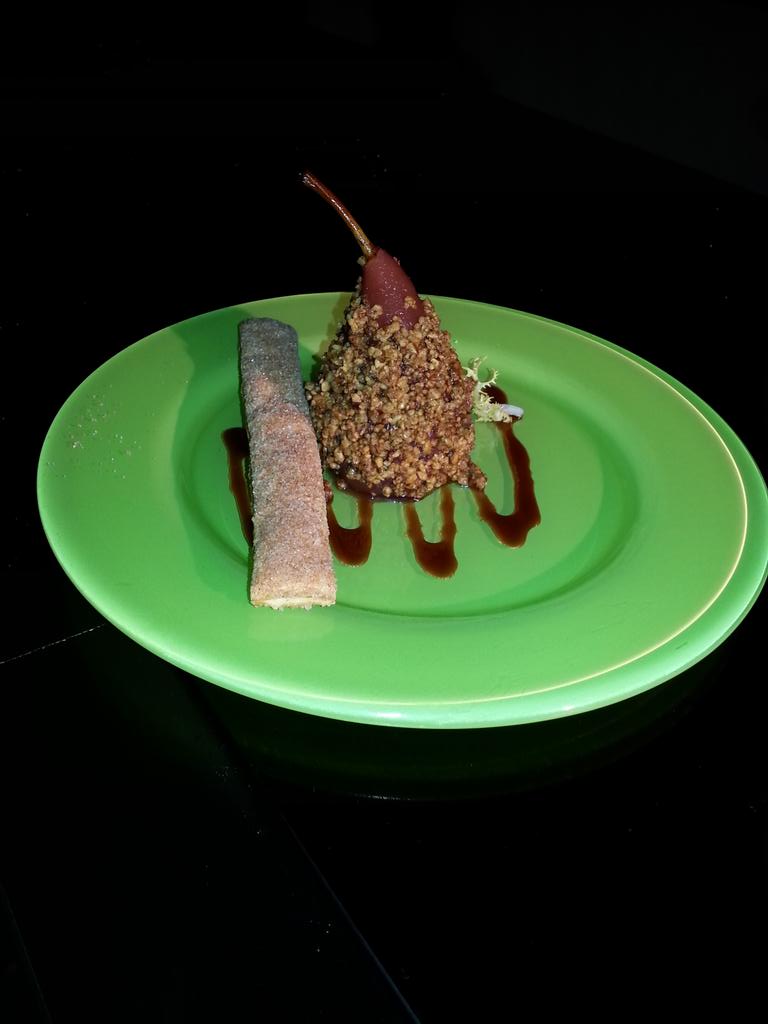 Asda then followed this demonstration with a talk from their head wine buyer Philippa Carr, who talked us through the various white, red and sweet wines on offer that were appropriate for different occassions. 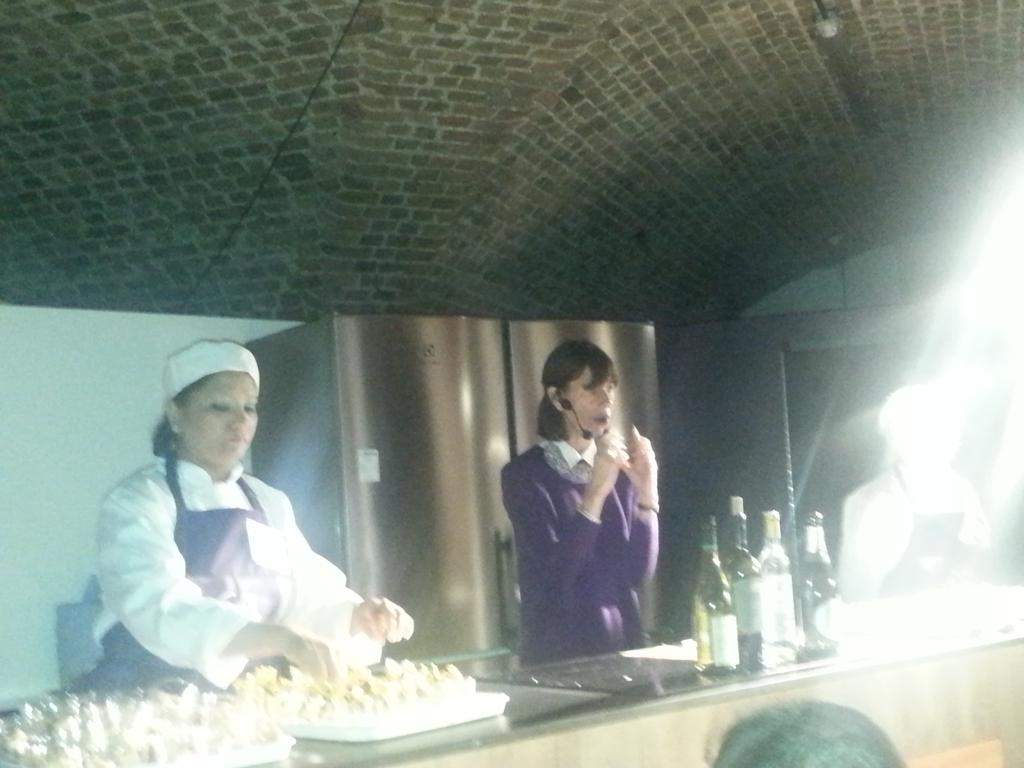 There was great music at the Coffee House Sessions stage including from Dom Rosenfeld. 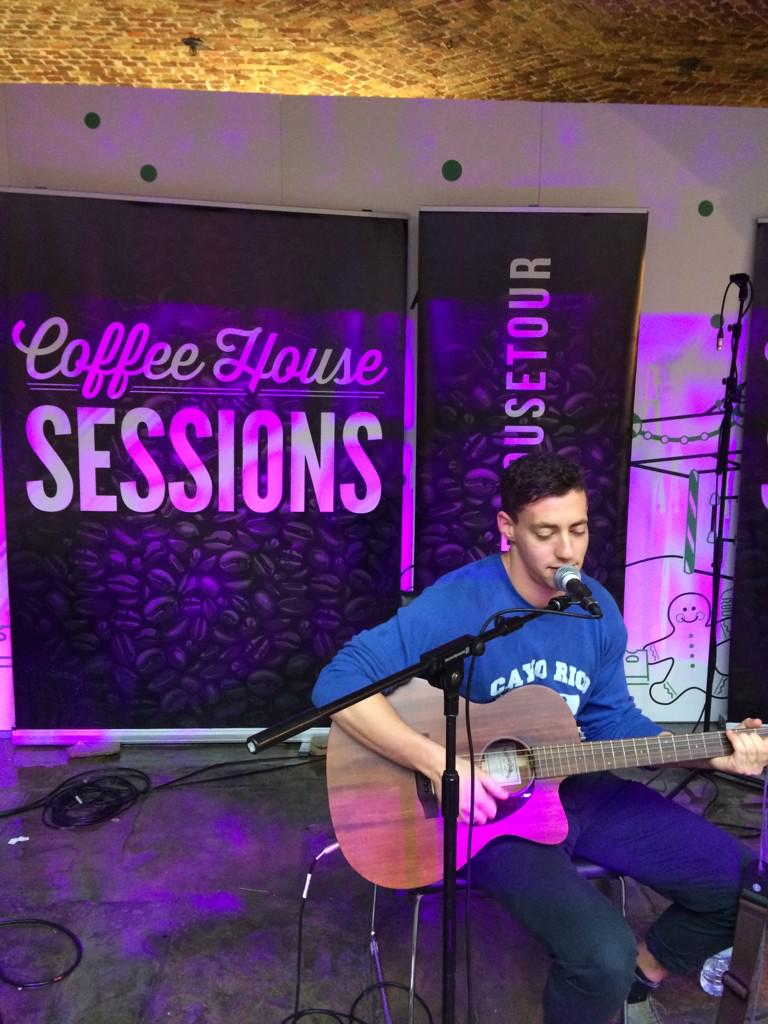 Also stopped by for a sugar boost in the form of Christmas marshmallows at Mallow & Marsh. 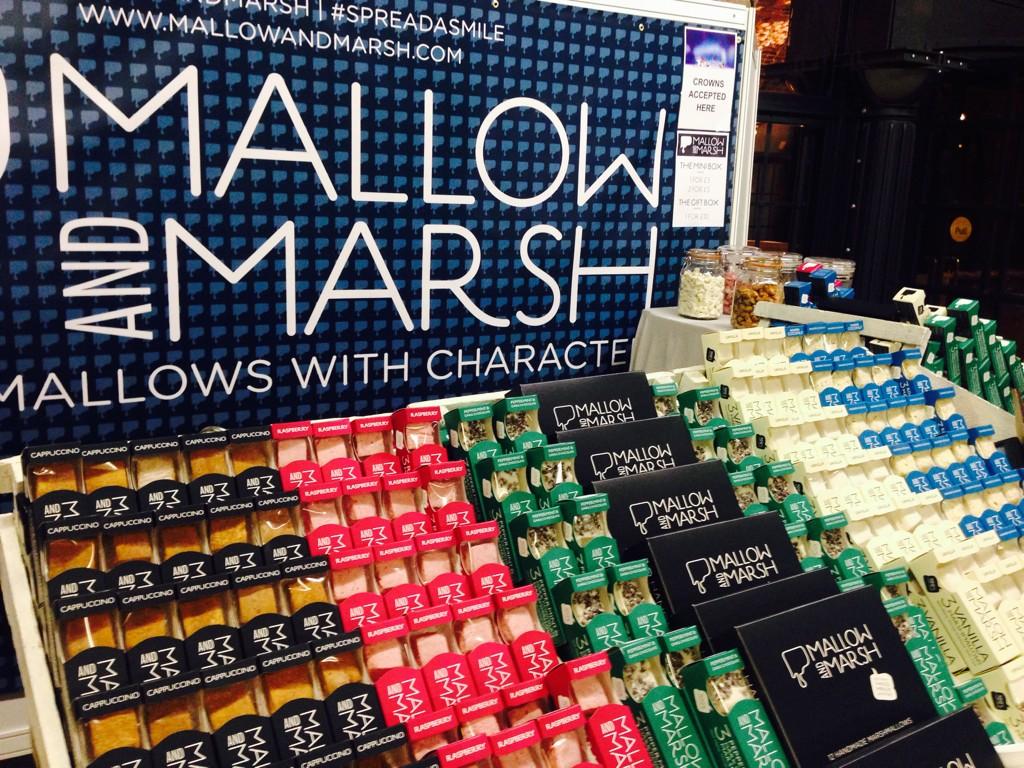 Loved how relaxed MasterChef Champion 2014 and Malaysia Kitchen Ambassador Ping Coombes was whilst she demonstrated how to make Beef Rendang in the Malaysia Kitchen. It was a beautiful dish, fragrant and flavourful, and we also enjoyed chatting to Ping briefly after the last afternoon demonstration.

It was a cold and rainy day, and when you were standing outside for the outdoor events especially to watch the culinary theatre in The Winter Fire Pit, it would have been nice to have areas with patio heaters to help you to warm up again. ToL team, please take note as this maybe an idea for the next winter festival and will help people to enjoy the outdoor located events more.

Overall, we had a ball of a time during the day and highly recommend checking out Taste of London Winter next year. See you all again soon!

For this winter’s tickets, head over to find out more and buy tickets:

Please see our Facebook photo album for more pics from this event.

International food and travel blog by London based British Goan duo: Jason and Chiara Pinto. Twitter: @goantolondon @jasonpinto100 @chiarapinto About Goa: Goa is a small state on the western coast of India. Though the smallest Indian state, Goa has played an influential role in Indian history. Goa was one of the major trade centers in India, thus it had always been attracting the influential dynasties, seafarers, merchants, traders, monks and missionaries since its earliest known history. Throughout its history Goa has undergone continual transformation, leaving an indelible impression on various aspects of its cultural and socio-economic development. History of Goa: The East-West symbiosis of Goa makes it different from other parts of India, more than the historical and social niche. The history of Goa is a sweet and sour story of colonial heritage, oppressive rulers, a glorious culture, and uneventful immediate past. As a land with the identity of its own, Goa was brought into focus when it was liberated of Portugal from its oppressive rule of around 450 hundred years in 1961. Goa was captured and annexed to the Portuguese in 1510 following the urges of trade and demand of spices and also cottons and indigo. But, Goa has a history that starts much before Portugal even thought of Goa being where it is. Goa was coveted and ruled by a great number of Indian kingdoms and dynasties from the 4th century onwards. The first kingdom to rule Goa and Konkan were Bhojas, who were the feudatories of Ashoka in 4th and 5th centuries AD. The city of Chandrapur (present Chandor) was founded by Prince Chandraditya, son of Chalukya King Pulakesin from 566 to 597 A.D. after this, Goa was ruled consecutively by Silahara Dynasty, Kadamba Danasty, and finally Hoysalas from 1022 to 1342 A.D. From the 14th century onwards, Goa became a great trading center on the west coast, especially in the vast trade of horses imported from the Middle East. This was the time for bigger empires to move in and Vijayanagar Empire conquered it in 1344. But there empire was not going to last too long and in 1347, Bahmani Sultans defeated Vijayanagara forces in 1347 and controlled Goa. Afterwards, it was a time of great prosperity and peace for Gpa, especially during the rules of Yusuf Adil Shah and Ismail Adil Shah. They created beautiful houses, fortified Goa, and encouraged local craftsmen. Their liberal and progressive rule was not going to last too long and situation changed in 1510 A.D. Goa for all purposes was not on the Portuguese Radar even after a long time of their presence in India. When the Portuguese nobleman Alfonso de Albuquerque and his cousin Francisco de Albuquerque were sent with a powerful fleet in 1503 on the orders of King Dom Manuel I, the purpose was to defend the cargoes of spices, mostly pepper, against Arab Muslim raiders. The center of spice trade was Calicut at that time and Portuguese had built forts in Cochin and Cannanore. It was in 1506-08 that an opportunistic pirate, Timoja, persuaded Albuquerque to attack Goa and acquire a better land base. This made Goa, Portugal's first real territorial acquisition in Asia. After a brief period of recapturing by the Muslims, Goa Albuquerque finally captured Goa in 1510. The inquisition of Goa in 1540 reversed the previous liberal policy of Albuquerque and imposed strict censorship of literature and new laws to forbade non-Christians from professions. Forced conversions took place continuously, censorship was established on literature, the temples were destroyed, and non-Christian priests, holy men, and teachers were evicted. This led to continuous fleeing of Hindus from Goa to other parts of India. It is not that the relationship with Portugal brought only destruction for the Goans. Portuguese also built great churches like the church of St. Cajetan and Bom Jesus basilica in Old Goa, which is a pilgrimage site for the Christians from around the world. But it is also true that pre-1961; Goa was a highly impoverished region very backward and primitive. It is after the liberation that Goa of today has emerged and it has surprised even the locals many of whom had left their homeland before its liberation. Portugal and India are today friends and Goa continues to be a fascinating blend of Latin and Oriental. Information sourced from: http://www.royalorienttrain.com/goa/goa-history.html
View all posts by goantolondon →
This entry was posted in 2014, England, Global inspirations, London, Ping Coombes, Taste of London, Taste of London Winter and tagged #ExtraSpecial, #ProtegeProject, #SecretIngredient, #TasteWinter, '#asdawinter, @AssadoWaterloo, @BeingCThompson, @Benaresofficial, @CoffeeHouseTour, @DanDoherty_, @domrosenfeld, @duckandwaffle, @ElectroluxTaste, @Ford, @forduk, @Leithscooking, @MalaysianFoodUK, @marcusverberne, @McgeeAidan, @MGaletti01, @MrTodiwala, @NunoViajante, @origincoffee, @RoastRestaurant, @TasteofLondon, @thetruscottarms, @WanPingCoombes, @Wine2laydown, Asda, Asda Extra Special, Atul Kochhar, cuisine, festival, Green & Blacks, Gu Puds, L'Artisan du Chocolat, Leith's School of Food and Wine, Leiths School, London, Malaysian, Malaysian Kitchen, Marcus Verberne, Ocado, Ping Coombes, Pings Pantry, Roast Restaurant, Taste Festivals, Taste of London, Taste of London Winter, Tobacco Dock. Bookmark the permalink.